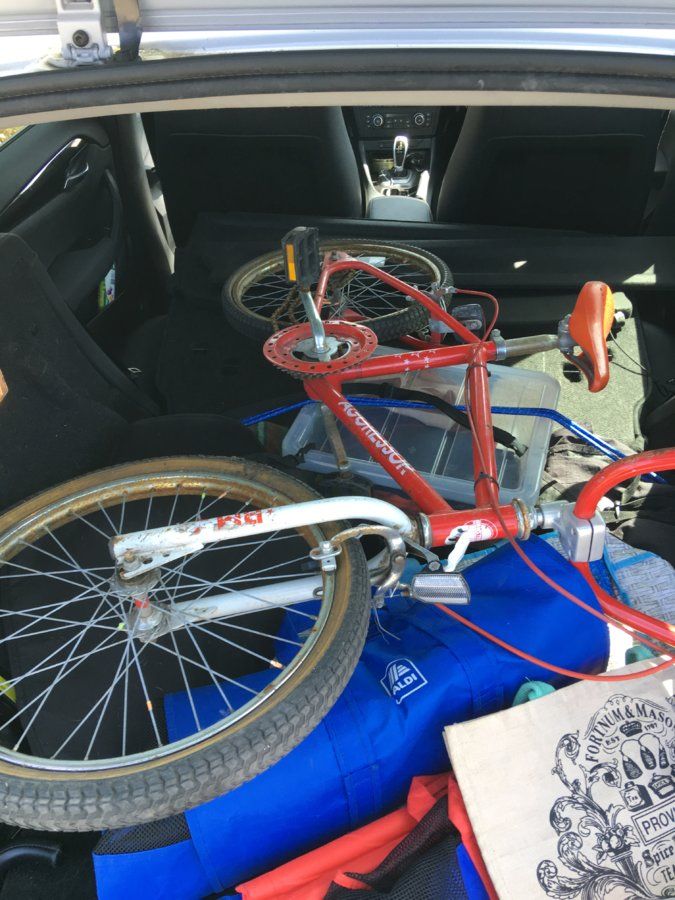 To be honest it wasn’t in a skip it was leaning against a wall with a ‘free please take’ label on it.
I know nothing about BMXs except some years ago my cousin asked me to look out for a Raleigh Burner and or a Bob Harro so hopefully this is a bit of cosmic ordering?
A bit of research leads me to believe it’s basically a Mk 1 gussetless Raleigh Burner with low end components made in the dying years of Raleigh (1989?). They seem to have been made from new old stock parts eg the frame number points to Nottingham June 1984. (Frame number NH4029558) They are said on a few sites to have been made for ‘Armstrong’ - who? and also to have been made to compete with cheap imports which doesn’t actually make sense. A bit more research shows that Armstrong was a vintage marque owned by Tube Industries (along with Triumph Hercules and of course Raleigh etc.) so it makes a bit more sense that TI Raleigh used an old marque they owned. Would it be a travesty to convert it to a replica Mk 1 burner? Can anyone chip in to tell me I’m barking up the wrong tree or any other information on this model please?
Last edited: 21 Apr 2019
S

Nice find, especially as a freebie out of a skip.
Raleigh often rebadged cheaper bikes using one of the old marques they acquired during the takeovers and consolidation of the cycle industry. If you think about it, it makes logical sense, they may not have wanted to "cheapen" the quality of the Raleigh-branded bikes sold through official Raleigh dealers, but at the same time they needed to compete against other marques, especially the "catalogue bikes" that must have been taking some of their business in the 1980's.
I used to have a secondhand BSA badged 5-speed "racer" in the early 80's that was essentially an all-steel, low-end Raleigh with a different paint job and badge. It was another bike sale for Raleigh, but avoided them having to discount the pricing on Raleigh bikes sold through Raleigh dealers.
Personally, I don't like "fakes", where a frame is re-liveried to try to make it appear to be a "better" bike. The result won't be truly identical, and it won't fool a real collector. It's simply snobbery or dishonesty, depending whether profit was the motivation or not. Ironically, the Armstrong bike is probably rarer than a Raleigh-badged Burner, so personally I would leave it as an Armstrong and enjoy having an unusual example of badge engineering that will probably get more attention by virtue of not being liveried as a Burner!.
OP
OP

Good advice - I’ll take it unless my cousin decides he wants it in which case I’ll pass on your advice.
OP
OP

Update - my cuz is going to ‘make it look like a brand new Armstrong Aggressor’ - right decision.
You must log in or register to reply here.

A
Lance Armstrong on a BMX