I'm old enough to have watched the first Moon landings and enjoy watching the live rocket launches. It's incredible the advances in such a short time, and watching the synchronised landing of two Falcon rockets was as close to Sci Fi as it gets.
I've also been following the Starlink Launches and found an excellent resource which shows the various satellites as they circle the earth. There's lots to play with, the more recent launches show up as lines, and zooming in resolves to the individual satellites in a "train". Each satellite has its own unique identifier of launch number, satellite number and altitude.
I've set my home location and can watch each satellite as it approaches, there's also an option to display each individual satellites range as a circle.
OneWeb is there too, and you can see the satellites on Polar orbit.
Here's the link.
https://satellitemap.space/
OP
OP 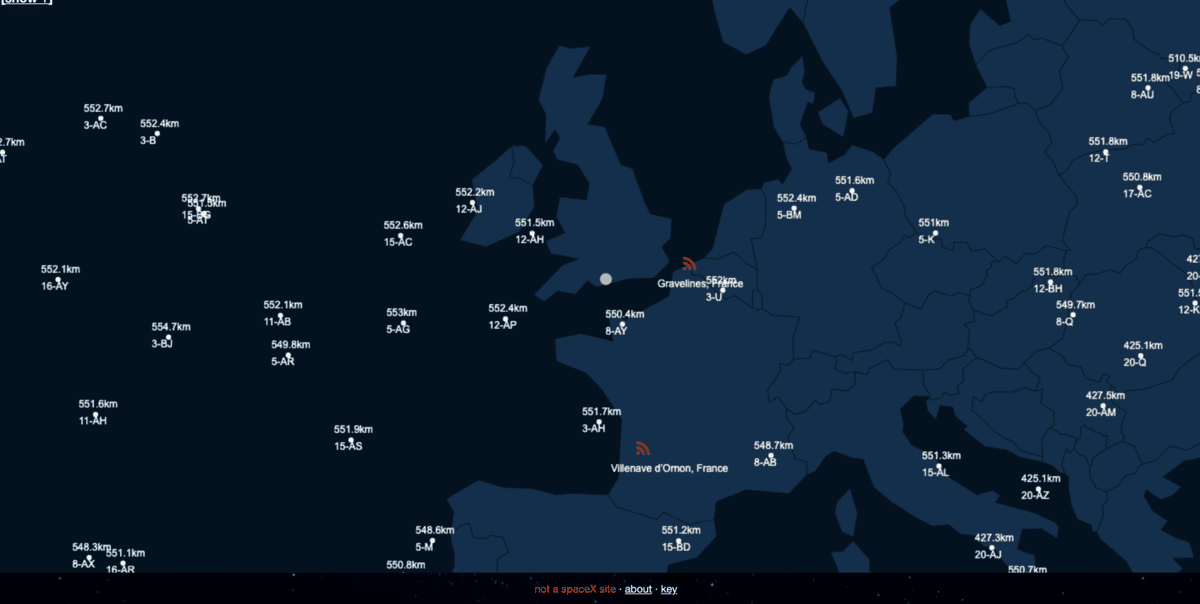 They came over my house twice last year. Very easy to see and obvious why it is called the Skytrain. It is one of the most exciting things in the night sky that I have seen.

How do you set your home location?
OP
OP

steveindenmark said:
They came over my house twice last year. Very easy to see and obvious why it is called the Skytrain. It is one of the most exciting things in the night sky that I have seen.

How do you set your home location?
Click to expand...

I was using my phone and allowed it to “ use your location “ I then manually entered the Lat/ Long into the boxes on my laptop.
I’ve also hidden the info box that appears on the left of the screen. With my home location set the page draws a line on screen from home location to the satellite it would be “ talking “ to, sometimes two satellites depending on what’s in range.
interesting that the trains show launch number and satellite number , ie ( starlink ) 19a, 19b, etccomplete with individual satellite altitude as they slowly climb into their final orbit, I hadn’t realised they take several weeks / months to deploy.

I just rely on tweets from Virtual Astro to let me know when they're visible. I think I've only seen them twice due to clouds etc but well worth looking for.
OP
OP

The screen looks a bit like the “ Asteroids “ type arcade shooters from the eighties, especially as the Starlink satellite approaches your home location.

Anyone seen the Starlink satellite constellation?