Here in France I live in a very rural area and it's great for the quiet narrow roads but the size and speed of the tractors travelling these roads can be very scary.
If we meet one we pull off into a gateway to let them pass, after all they're working and I'm just having a ride.
The drivers are often very young, under 15 I'd say and sometimes towing a large,loaded 4 wheel trailer.
I've seen a number of tractor and trailers overturned on bends, hence my nervousness.
I've asked around and there seems to be no test required to drive these huge machines.
I find this amazing as driving a truck of that size certainly does.

Are there any controls on who can drive a tractor in the UK?

As above the regulations.

But yes it is scarey.
Similar here, narrow lanes not designed to take this kind of traffic.

Plus youngsters are often working for contractors who are pushing to finish this job, get onto the next.
The payments on all this kit (often leased) is not small..

The profit margins are very tight.

And then there's the weather to contend with.
We had an awful accident near here a few years back.
It's making the hairs on the back of my neck rise thinking about it.

Basically a tractor and full silage trailer driven by a young man came nose vertically down off a high field edge 30ft into the tiny lane below.

I just hope it was quick.

There does need to be better regulation on these large machines, and how they are driven imo.

But the way I see it, it's just another symptom of the devaluation of food, and the people who produce it.

At ag college thirty years ago we were basically taught that our farms were a factory floor, just like any other industry.

Get big, or get out, everyone is chasing tighter and tighter margins..
If any margin at all.

Agriculture and fishing have taken the number one spot for industrial accidents, and deaths since the construction industry cleaned up its act

We are often working alone, pushed for time, and sometimes don't have time or resources to fix, or do stuff properly.

So I've found a way to make 'slow farming' pay the mortgage, wages, and me.

But a lot of the bigger guys are in a stranglehold of debt - having followed the orders they got about investng in big kit big tech, and relying on aggro chemicals.

Consumer wants 'convenience' and 'cheap as chemically grown, reliant on gallons of diesel chips' so we are where we are.

I still do occasionally take delight in holding up the traffic in the lanes as I chug along at ooo I dunno 15 whole mph on my old machine.

Thing is, those big machines are fun to hare along in, I know I've done it, you feel like 'King (or Queen) of the road - til it all goes wrong.

It used to be 14 in the UK. When I were a lad we were insanely jealous of my mate who drove his Dad's tractor around the village of an evening while we were still 2 years away from getting mopeds. The law changed on that not long after to prevnt future young generations enjoying themselves.

I'm quite happy to be 'stuck' behind a tractor obeying the speed limit (15 or 25MPH, depending on the class) rather than seeing them razzing along at 40, barely in control. in fact, I'd quite like a classic tractor to play with.

The tractor drivers around here are pretty good. Mind I did get stuck behind one that had been ploughing a field. It was like dodging land mines as the clods of earth fell off the plough attachment as the tractor bounced its way back to the farm.

I used to drive tractors and trailers from field to barn. The articulated trailers were a beast to handle. Reversing our non artic flatbed full of bales required the coordinated action of 3 children. My 12yr old sister would operate the tractor. I (14)would provide info on direction from the rear and my 16 yr old brother would convert direction to steering instruction.
We did things that would make any elfnsafety inspector drop his clip board in horror but we were well aware of the dangers.

This always reminds me of that clip that went viral on Soccer AM where the young northern (Lincolnshire?) lad is behind his dad's tractor.

Edit: Found it, be warned that a few of the words are not safe for work or for children:
View: https://youtu.be/7xGLAMzGHe4
Last edited: 24 Nov 2020
M

On one farm I worked during the summer holiday, a teenage farm girl who knew her way around a tractor met an oncoming jaguar ( car not cat). She pulled over on the narrow lane but Jag Man insisted that he pull over and the tractor and low flatbed trailer pass. The horizontal gouge in jag was a joy to behold.

MichaelW2 said:
On one farm I worked during the summer holiday, a teenage farm girl who knew her way around a tractor met an oncoming jaguar ( car not cat). She pulled over on the narrow lane but Jag Man insisted that he pull over and the tractor and low flatbed trailer pass. The horizontal gouge in jag was a joy to behold.
Click to expand...

Very clever of the Jaguar driver, in doing what he did, he passed all the responsibility and danger onto the other party. He was static, other party assumes the risk.

I don't mind tractors, just pull out the way and let them get on, its a win win for both sides.

My tractor story....17 yo, driving a Landrover on the A1, circa 1976, its dark, quiet and wet and i'm doing maybe 60mph, I glanced across at my colleague, he'd fallen asleep, i looked back at the road....TRACTOR TYRE

right in front of me.
A huge BOOM, Landrover reared up, i felt it was at 45 degrees, a bump bump as i passed over the central reservation then BANG....and nothing.

We sat sideways in a ditch aside the opposite carriageway, doors wouldnt open, we clambered out the back and made sure the tractor driver was ok, then walked to a nearby Little Chef to phone for help.

Farmers turned up and repaired the rear lights (i assume they wernt working, contributary to me not seeing it in the first place). I protested to the guys, then the Police that attended...not interested..Meh, i'm a 17 yo, easy pickings and ive driven into the back of another vehicle.
My fault partly undoubtedly...but i did come off worse that i should have.
Landrover was an utter write off. In a car i suspect we'd have not survived. Tractor was maybe undamaged, i'd hit his massive tyre. He'd parked on the verge as he closed an adjacent gate but left one wheel slightly on the road...hence me hitting it.

Similar story here. The spuds, beet and maize were harvested over the last few weeks here which means all hands on deck and 24hr tractor activity in mid-end Oct. Often the farmers sons drive them, even the mega loads which i guess must be +40t and usually being pulled by Fendt 1050's at pretty amazing speeds

Just an observation from a non farmer.
The speed of these newer tractors seems far too fast.
They're truly massive and have difficulty getting through our village. They seem better suited to large prairies than small farms.
For a lot of these farmers it's a very isolated working life.
France was a nation of small farmers but most employed someone else.
Today many of these farms have been bought up and mechanisation taken the place of co workers. Luckily we've got mobile phones so they can chat to their mates.
Our nearest farmer puts in hours that are staggering. We've known him cut fields all day and carry on all night under headlights.
Back in the 80's UK farms had a terrible safety record. Horrible injuries from power take offs and dodgy electrics in the barns.
I guess elf and safety has improved matters.
Much as I love the countryside I'd never want to be a farmer even if it was financially rewarding.

The A1 north of Alnwick is not dual carriageway... tractors often need to travel in convoy from farm to farm which means articulated lorries can't get past easily... it can take up to two hours to get the 30-odd miles from Alnwick to Berwick during planting or harvesting season, but what are farmers supposed to do when there aren't alternative roads.

A few years ago, when we still had the old Hospital, a few of us were 'volunteered' (as it was known we liked big machinery, & I'd driven them before) to learn to drive/operate tractors & 'front loaders'
This was due to a couple of the previous crew leaving

The 'JCB' was used to load a towed (by tractor) gritter trailer, that had its spreader driven from the axle; like a truck in reverse (instead of engine driving the wheels, the wheels via diff/propshaft were geared to the spinner/'walking floor' (archaic conveyor belt) 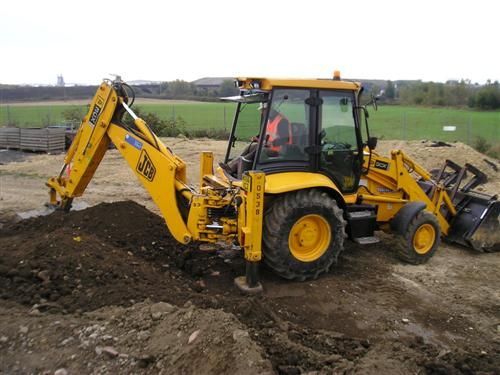 This was my 'toy' for the week 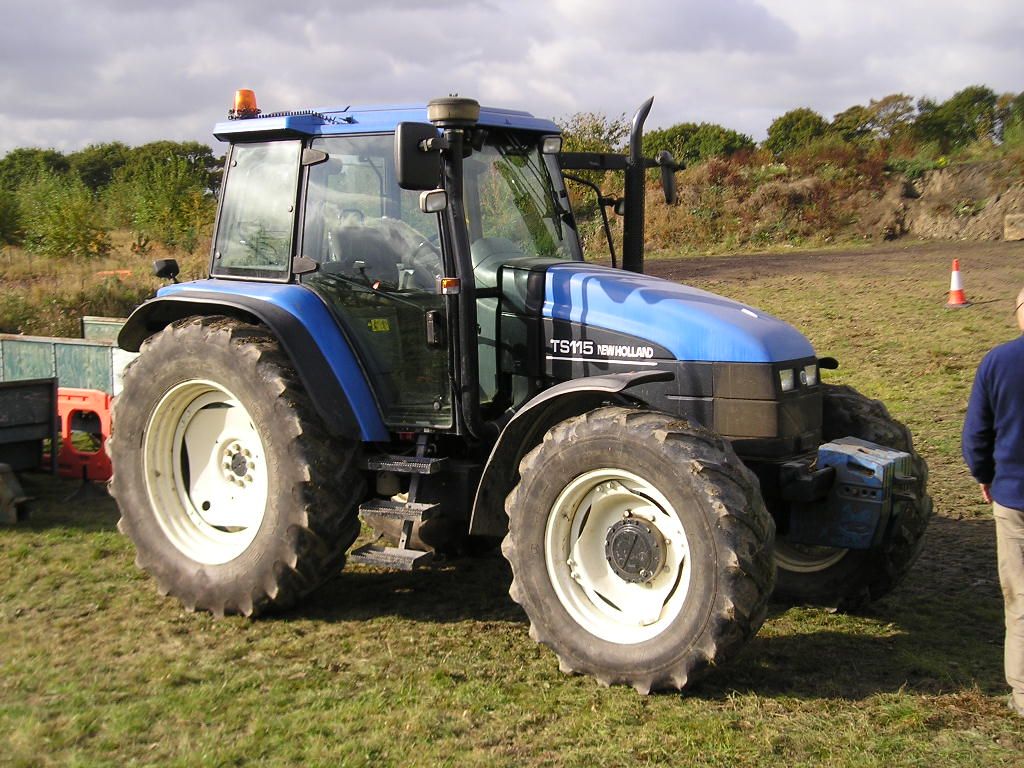 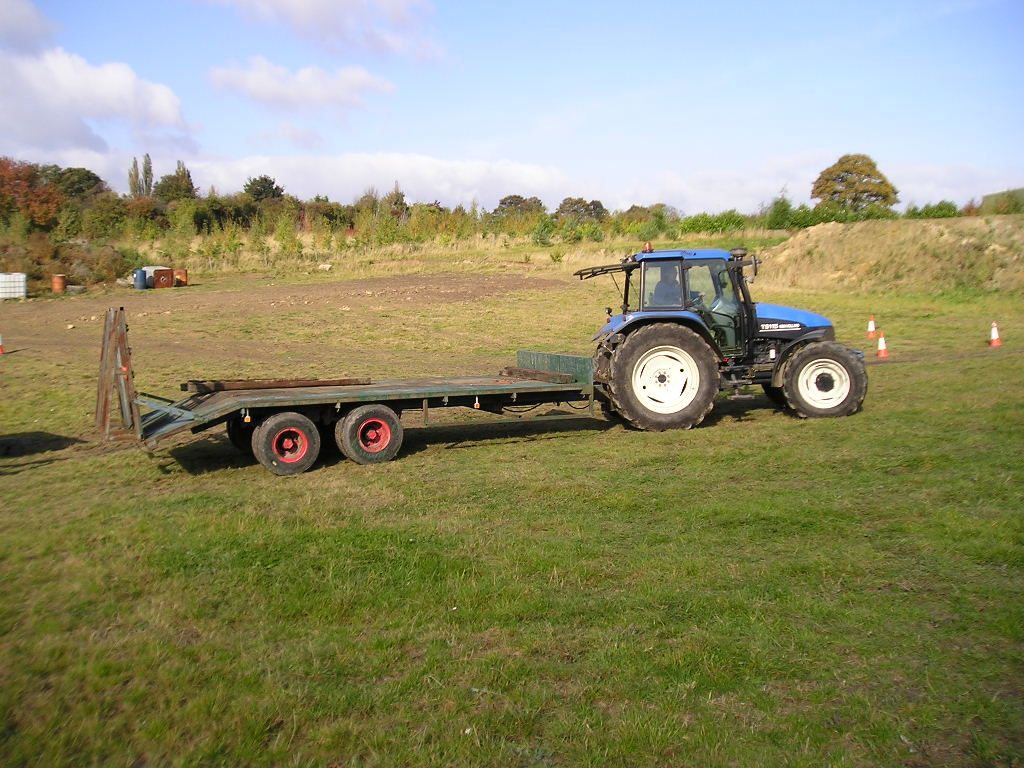 It could be a hard week on call, weather dependant
(we were paid on-call every hour that we weren't working, not much, think it was £1.50/hour, but it added up over the rest of the week)
I still remember one night, I was late away, & left at 22:00
It started snowing again, so I thought "bed" before 23:00
The phone rang at about 23:30, so up & dressed, drove carefully in

Out on the tractor, in fairly heavy snow (no rear window on cab of that tractor!)
Cleared the grounds, to see roads covering again
Got asked by switchboard to go over to another hospital site we had, & do that

) told me, was that any staff (from domestic to Surgeon) could have their following rostered day off (paid) if they'd been on-call & in the premises for over 2hours..... that could have been a 'local agreement', dating back to the days when it was 'Wakefield Health Authority'?
(I was told about that, after we moved into the new Hospital in 2010, & handed such responsibilities over to the PFI owners of the site)