we've all been kids and you just luv to show off to ur mates,

on my tracker i had 3 airhorns, 3 front lights, a car spot light and a whip aerial, plus back lights,,,i thought i looked soooo kool, just like the lads in the custom cars

what did you do

I had too many accidents to remember.

Once, I tried to cycle down a very steep flight of steps at my local railway station and hit the brakes by accident, causing me to go arse over tip down the steps with my bike bouncing down just behind me. I stopped but it kept going and I'm so glad it didn't actually hit me, otherwise it would have been bloody sore!

The bike somehow was never quite the same after that!

There are other stories like that involving impossibly steep slopes, etc etc.

That said, the worst injury I have given myself was a stress fracture in one of my ankles once.

At the risk of sounding like I was wrapped in cotton wool (which I wasn't, as my tree-climbing career testifies) I was a very careful cyclist as a child - never wanted to scrape the paintwork on my precious Raleigh!

Worried about damaging the paintwork?? pah, I don't think that such a thing ever even occurred to me!

If Evel Kaneval can ride a bike across quater of a mile of canyon with a parachute in case it all goes wrong, I still fail to undersand why my 10 foot leap from the garage roof to the shed roof with a double duvet cover parachute failed so miserably.

I inherited a chopper from my brother when I was a kid and I'm pretty sure I re-enacted an Evel Knievel stunt and went over the bars. 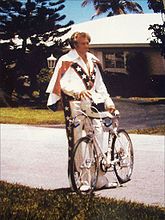 Mad Doug Biker said:
Worried about damaging the paintwork?? pah, I don't think that such a thing ever even occurred to me!
Click to expand...

Thing is, I'd waited 2 years for that bike... and the mudguards, being metal, were colour-matched to the frame and liable to denting too!

I was leading a little troupe of "follow my leaders" along on bicycles and they had to copy what I did. I decided to ride with my eyes closed - of course now being older and wiser I realise that as they were behind me they didn't know that my eyes were shut (doh!) Unfortunately I cycled into a wall. I still have a scar on my finger where I took all the skin off as I grazed along the wall!
C

i remember an elswic hopper i had, it had handlebars that bend back round towards you, would that be cowhorns, anyway i rose up off the saddle to inject a bit of pace into proceedings, and both grips came off in my hands and i ploughed into a lamp post...!!

i saw someone last week at the Halfords tour in exeter with a car stereo and speakers on his bike...god know how he powered it?!

As a kid i lived on a mothballed RAF base in Nottinghamshire, 100 houses, probably only 20 of them occupied and a whole airbase to play on

Lots of privet hedges all around the houses and gardens. So we used to build a mud ramp aimed straight at the hedge which was about 6 ft tall....ride like hell, up the ramp and crash into the (relatively)soft privet hedge

At some stage (early 70s) one of the few lads there got a Chopper....i had the standard sturmey archer town bike type thingy.
So...apehanger handlebars (we had cowhorns as well at some stage)...and took the bike to the local village blacksmith and got him to extend the forks . Hells angels on pushbikes

Gawld knows what we looked like. It was so hard to steer, its a wonder they didnt snap..but they held up.

That same base had a pair of ginger haired twins (the Postma brothers ..hello if your out there

). Someone...not me, undid his front wheelnuts...he rode off, fell off...blamed me and promptly blacked my eye

Bugger, he was a big lad, with a big hit

No-one ever did admit to it...barstewards. 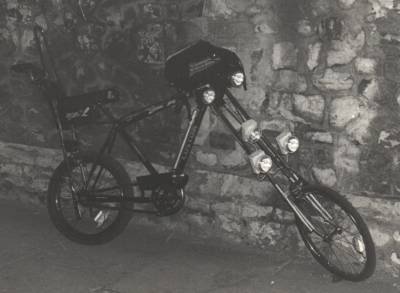 I rode really fast down a steep road once and then lost it near the bottom. I had to bale as the bike stuffed itself under a parked car.
I spun down the road, spread eagled on my front, a few more car lengths before I stopped.
Loads of road rash on palms and knees but, thankfully, I kept my face off the road.

When I was eight, I tried to see if I could jump over a flowerbed using a ramp made out of planks and wobbly piles of bricks.
Turned out I couldn't. Splat.

rsvdaz said:
i saw someone last week at the Halfords tour in exeter with a car stereo and speakers on his bike...god know how he powered it?!
Click to expand...

Funnily enough, one of the kids that I teach has just bought a set of speakers mounted in a back pack to annoy whichever neighbopurhood he rides through. A snip at £75 apparently.

I wonder what Danny McCaskill got up to as a young kid?
You must log in or register to reply here.
Similar threads