What type of bike for main transport?

uphillstruggler said:
I think I’ll leave it there
Click to expand...

Seigi said:
Hi all, long time since I've posted here - I'm getting rid of the car entirely and I've decided I'm going to use my bike as my main form of transport but I'm undecided what style to get - it needs to be able to carry shopping/stuff, for commuting, generally getting about town. Theres the odd off-road track but most cycle paths are paved.

Would rather not have an aggressive road bike purely for comfort


Cycleops said:
I think you might need more than one bike.
@Andy in Germany is car free so I'm sure he'll give you the best option.
Click to expand...

I'm sure I can't be the only one. Or am I just the most mouthy?

As others have said @Seigi, it depends on a lot of things, but it is easier than a lot of people think. I can show you what we use, with the disclaimer that it isn't perfect for everyone.

We live in a fairly hilly place, with reasonably good cycleways and relatively well behaved drivers, so these bikes work for about 80% of our needs. Public transport is pretty good and can deal with most of the rest with the occasional lift for occasional things that seem to have been made deliberately inaccessible by bike. In practice this is once or twice a year.

When we decided that were not going to get a car, one thing we did was convert my Raleigh MTB into an Xtracycle, which covers most of our needs: 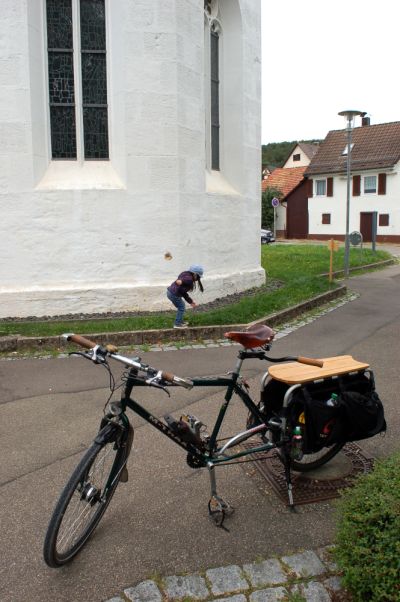 This worked pretty well as my only bike until I realised I'd trash it if I keep using it all the time in all weathers. I've used it for carrying stuff, family transport, and touring, and occasionally all three at once. If I was starting from scratch new a Big Dummy or Yuba would probably be better, because they have one frame instead of two bolted together. Alternatively maybe the Gazelle upthread or the Workcycles Fr8 if you don't have too many hills.

Partly to keep this bike in good condition as long as possible, we went and got the Bakfiets: 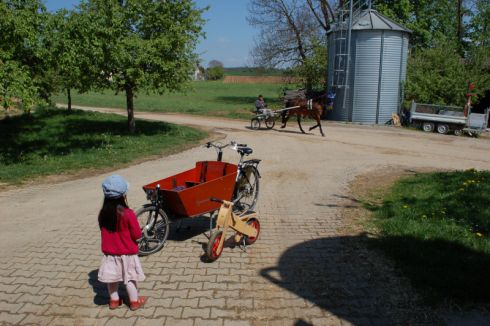 This solved several problems of kid transport and carrying very big stuff including an entire bed on one memorable occasion. It's very solid and has worked with little trouble for the last ten years, and is fantastic for shopping. On the other hand it is heavy, about 30kg empty. Beautiful Wife can ride it okay but not on anything resembling a hill.

For other stuff like commuting I use a normal bike, especially if I don't know if I have a safe parking place. This is a 20 year old MTB with lights, mudguards and a luggage rack fitted that looks very tatty but works perfectly.

I think it depends a lot on what you need. Our collection expanded as we realised we needed something for a different job. I think the most important thing is to get a fairly solid bike that is comfortable and can carry stuff, then add or upgrade over time. If you have an old Hybrid and later get a Gazelle, you can still use the Hybrid when you need to leave a bike at the bus stop all day, for example, so you won't lose anything, just start and adapt as your needs change...

ETA: One major 'disadvantage' with both of these bikes is that people like to talk about them; you can get asked questions fairly frequently...
Last edited: 17 Sep 2019

If you're towing a trailer I'd recommend a steel frame.
M

raleighnut said:
If you're towing a trailer I'd recommend a steel frame.
Click to expand...

I have been towing with my aluminium frame for 8 years. Towing bikes should be decent mid-level grade rather than superlight any material
If you are towing off the rear axle it is better to have vertical rather than horizontal dropouts, and solid rather than qr hollow axle unless you use a special skewer system.

I'd start with a used hybrid or old style rigid MTB - fit it with guards, rack, panniers etc and take it from there. But definitely something with a triple up front and some largeish sprockets on the back. Maybe look at your local bike co-op or something of that ilk?

It gets you out on a bike and doing stuff, and while doing that, you can figure out what you really need to be car free, be it a cargo bike, a folder, a touring bike, a trailer etc. Upsides is you can always keep this bike to use as a hack bike.

If you intend to use the trains a lot and need cycle at both ends, then a folder would be a good investment - you can take a folder on pretty well much any train if it's folded, whereas there are restrictions as to when you can take a non-folding bike.

I use a Boardman Hybrid, for this type of riding. The current best all round VFM bike, of the type I use is this.

You’ll be thankful of the suspension forks, if you’re carrying anything substantial ( if you’ve got shopping to carry, for example).

Cycleops said:
That's kind of cute @Nibor Sort of like a Raleigh Twenty shopper on steroids. Wouldn't mind one, perfect for here.
Click to expand...

MichaelW2 said:
I have been towing with my aluminium frame for 8 years. Towing bikes should be decent mid-level grade rather than superlight any material
If you are towing off the rear axle it is better to have vertical rather than horizontal dropouts, and solid rather than qr hollow axle unless you use a special skewer system.
Click to expand...

My trailer has a clamp that attaches to the NDS stay, the reason I suggest Steel is it reacts better to 'cyclical' loads which aren't that bad with a light payload but increase dramatically once you've got a lot of weight on.

uphillstruggler said:
how about one of the new tribans from decathlon. they have a road and gravel version that both have rack mounts etc. both will take a decent tyre to make those paths a little more bearable. the gearing should be ok but you would need to check.

I think the cheapest is £520 ish that may leave enough for your second bike.

they look good in the flesh too.

Edit, just looked at the cost of the folder up thread so the triban May take you over budget but I’m sure decathlon do a folder but it may not be cool enough for a 27 year old

Bikes don’t have to be new. I’m writing this on a train accompanied by my £140 secondhand folder. I added a new (from the local bike charity, so s/hand) crankset to lower the gearing and new folding pedals from decathlon for an all in cost of £160. I’ve had it a week or so and already I’d be lost without it.
M

raleighnut said:
My trailer has a clamp that attaches to the NDS stay, the reason I suggest Steel is it reacts better to 'cyclical' loads which aren't that bad with a light payload but increase dramatically once you've got a lot of weight on.
Click to expand...

Not a huge fan of frame clamp mounts when axles make for more efficient well behaved mounting points. Steel is definitely better if you need to clamp the frame.

If you buy a folding bike or if you plan on attaching a trailer to a bike be sure you use a balaclava too so people won't recognise you.

KneesUp said:
Bikes don’t have to be new. I’m writing this on a train accompanied by my £140 secondhand folder. I added a new (from the local bike charity, so s/hand) crankset to lower the gearing and new folding pedals from decathlon for an all in cost of £160. I’ve had it a week or so and already I’d be lost without it.
Click to expand...

but with a budget of £1k your choices are good, even if you want two bikes.

im all for second hand/recycled, I have two from new and 4 second or more hand bikes and love them all.

I don't always recommend 2nd hand as I don't know the op or others knowledge level.

I'd look at your use cases and come up with a list of requirements it needs to meet.

So, for instance. When you go shopping how much do you get, and how many bags does it fit in? Will it fit in a pair of panniers on the back of a bike, or will you need a trailer. If it won't fit into panniers would you consider smaller shopping trips, but more frequently, so each shop will fit in your panniers? or will it be a big shop, less frequently therefore worth getting a trailer.

Do you own your own house or flat? Do you buy tins of paint and other decorating materials? How will you get them home? Walking distance or another use for the bike....

How are you going to deal with winter, do you get snow where you are? If so you will need wider clearances to fit winter tyres either siped like the continetal tyres or old fashioned studded.

Will you use the bike for utility trips only or also for fun? Do you have the space / money for multiple bikes?

Is it hilly, is an e-bike worth considering?

So work through the scenarios and that will help develop a sense of what your bikes(s) need to be able to do.

MichaelW2 said:
Not a huge fan of frame clamp mounts when axles make for more efficient well behaved mounting points. Steel is definitely better if you need to clamp the frame.
Click to expand...

The advantage is you don't need to remove the fitting for the trailer to attach it to another bike, also the 'hitch' is a large rubber covered aluminium clamp that tightens with a big (3") hand turned wheel thingy like a roof-rack fitting so you're not crushing the stay or marking the paint. This means it's not able to fit a disc frame which I think is one of the reasons they changed the design to an axle fitting on later versions.