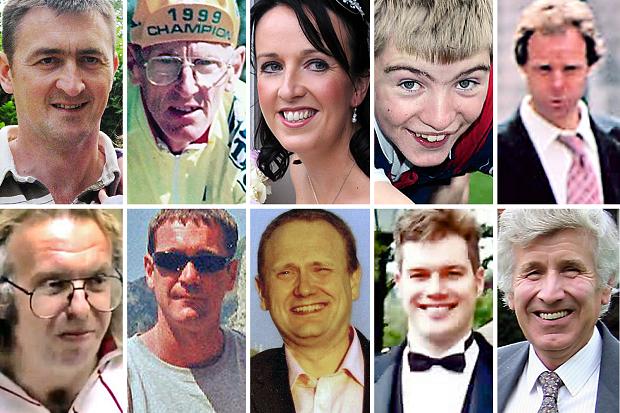 The two youngest people killed on their bike so far this year were just 8 years old. The oldest was 80. Nine teenagers have died while four of the victims were aged 12 or under. Most of the fatalities have been men, but five were women. Some were racing cyclists, but the vast majority were simply daily commuters or young children out for a fun ride on their bikes when they were killed.​
​
Sixty two cyclists killed. That's eight cyclists per month, that's two cyclists being killed every week.​

It's also roughly in line with what the figures have been for the last few years - at a time when cycling has been increasing.

So, in a perverse sort of way it's a good news story.

Articles like the Times's, and this thread, do nothing apart from reinforce the perception that cycling is dangerous. It's not.

It's not cycling that's dangerous,but the interaction with other road users. It would be nice to know how many cycling journeys are made in the UK every year.
We know people die in cars,but we also know how many cars are on the roads

I think you need to be careful when looking at these statistics, the real question is what happened. If they where racing down a hill on a blind corner then I would expect an injury or unfortunately a fatality.
If it was an accident where they fell off and sustained injuries that resulted in death then it is extremely sad but then if it is a result of another road user then you have a whole problem all together.

Cycling isn't dangerous if you take responsibility and are careful for your actions and take the appropriate precautions but if you have a driver who doesn't see you or otherwise hits you then we either need to look at increasing the protection of a cyclist, increasing their visibility/making drivers aware of the presence or enforcing safe driving at an earlier age to prevent bad habits.

defy-one said:
It's not cycling that's dangerous,but the interaction with other road users.
Click to expand...

If you've found a way of being on a road without interacting with other road users, I'd like to hear about it.

I saw some figures that suggested cycling was only slightly more dangerous than walking, mile for mile. I'll add the link if I can find it.

May be already mentioned elsewhere, but....
http://www.bbc.co.uk/news/uk-scotland-south-scotland-19162460

Indeed - for the poor man, his friends and his family.

Another statistic for the rest of us.

Very sad, but we really do need to carry some form of identity with us at all times I have dogtags
Condolences to family and friends

Some things do shock me, but this figure does not.

It will have been a bad outcome for the 62 individuals involved and a grim statistic for the friends, families and other bereaved.

I write this as the father of three teens (13, 16 and 18) one or more of whom has been out cycling in the Three Counties at any given time during these summer holidays.

Boris Bajic said:
Some things do shock me, but this figure does not.

It will have been a bad outcome for the 62 individuals involved and a grim statistic for the friends, families and other bereaved.

I write this as the father of three teens (13, 16 and 18) one or more of whom has been out cycling in the Three Counties at any given time during these summer holidays.
Click to expand...

I would agree, 2/3 of the way through the year and 62 deaths is low and when you consider the amount of traffic in cities etc. and the number of other incidents that result in death such as car collisions.
E

With however many million cyclists there are on the road, a number are going to die. Given some of the stuff you see, 62 seems like a pretty good number to be honest.

Hey, it might be me next, but it won't be a tragedy, it's just a numbers game, we're all going to die eventually.

I have been debating as to whether or not to replay to this thread as I have mixed feelings about it. Clearly any death is sad, but quoting statistics is utterly pointless and I don't really think that this forum is better for this statistic being posted. I simply don't see the point in the initial post. No offence meant to the OP, but just the way I feel.

Any number on it's own can look high, what we don't have with this figure is any context and without context I think that it is a useless figure and a pointless thread. We could now go and quote how many people have died from or doing different things, but again that would be pointless without knowing more context. But that I mean how likely are you to die doing it. How many people do it etc.

If there figures of miles per death, then it might give us a bit more context / likelihood of dying doing something. If as has been suggested above the number of cyclists has dramatically risen and deaths remained stable, then this is a good news story. Obviously not for those making up the figures though.

As Eddie says above we are all going to die, it's just a matter of when and how. I could see worse ways to go than doing something that you love.

Finally, I don't think this type of thread is really going to encourage people to take up cycling either.

getting better all the time

I would like to know the figures for the same period for pedestrians and motor vehicle drivers/occupants. Publicising cycle fatalities in isolation certainly raises awareness, but it does not provide any context.

If you're looking for some interesting figures try the injury figures for horse riding, a nice peacefull pastime[ ! ] and a lot of it done off road.
Alone statistics prove nothing, the danger is that they are used by people to score fine sounding political points.
You must log in or register to reply here.
Similar threads