Does anyone have any experience of/tips on taking bikes on trains in Germany.
I’m considering cycling from Rotterdam to Frankfurt, then returning to Rotterdam by train.
I know the train service in Holland is very bike friendly, but have no experience of same in Germany.

You might see what @Andy in Germany has to say, as I think he may have some recent experience.
OP

Thanks for the lead.

I have use the train from Flensburg to Hamburg with no problems.

Here is a useful site

IIRC the Deutsche Bhan site will tell you what trains take bikes - https://www.seat61.com/bike-by-train.htm#Germany

Here in Germany, we have four main classes of train:

SBahn, which is ultra slow and very regional, travel only short distances around main hubs and takes a few bikes.
RE (Regional Express) tends to go a bit further and dependent on the train it can, like my regular commuting train, take up to 40 bikes in a dedicated bike carriage.
IC (Intercity), these trains travel the country at a reasonable speed and whilst they do have a number of stops, these tend to be far fewer than a RE or SBahn. They will often take up to about twenty bikes, usually in the last passenger carriage. However, be warned it's a pig to lift your bike up the steps and through the narrow door into the carriage.
ICE (Intercity Express) These are the ultra fast trains wich cover the country with far fewer stops. They have very limited space for bikes on only a few routes. Unlike the other trains these need to be pre-booked, if it's even available.

As above, check the Deutsche Bahn website and it will have all the info you need. Overall, this country is very bike friendly on the trains and nothing like the hassle you get in the UK.
OP

Thanks to all who have posted info and tips. I really appreciate the feedback. Back to planning and I’ll post my experience.

I posted a couple of thoughts in a PM, but in the basis others may find it helpful, here's a slightly abridged version

(also so it doesn't look like I'm ignoring @Jackslad)

As @chriswoody says, carrying bikes on trains here is relatively uncomplicated. You can carry normal bikes on most Intercity (IC) trains, but you'll need to reserve a bike place. Here is a shameless plug for a recent blog entry about travelling by train with my bike. You can see the bike rack is a bit tight. There are carriages with more spaces though. There are also a lot more low floor IC trains.

Unfortunately I've noticed newer trains are using bike racks that don't allow space for longer bikes such as my Xtracycle, so I have to use local trains.

Regional trains; Regionalbahn (RB), RegioExpress (RE) and InterRegio (IR) generally have a space for bikes, and are generally a lot cheaper than Intercity and ICE, but you can't reserve a place so you have to just get on board any old how.

Our state is investing a lot in rail transport and trying to encourage bike use, they're getting new operators and insisting they allow bikes on board. Some trains from the last week: 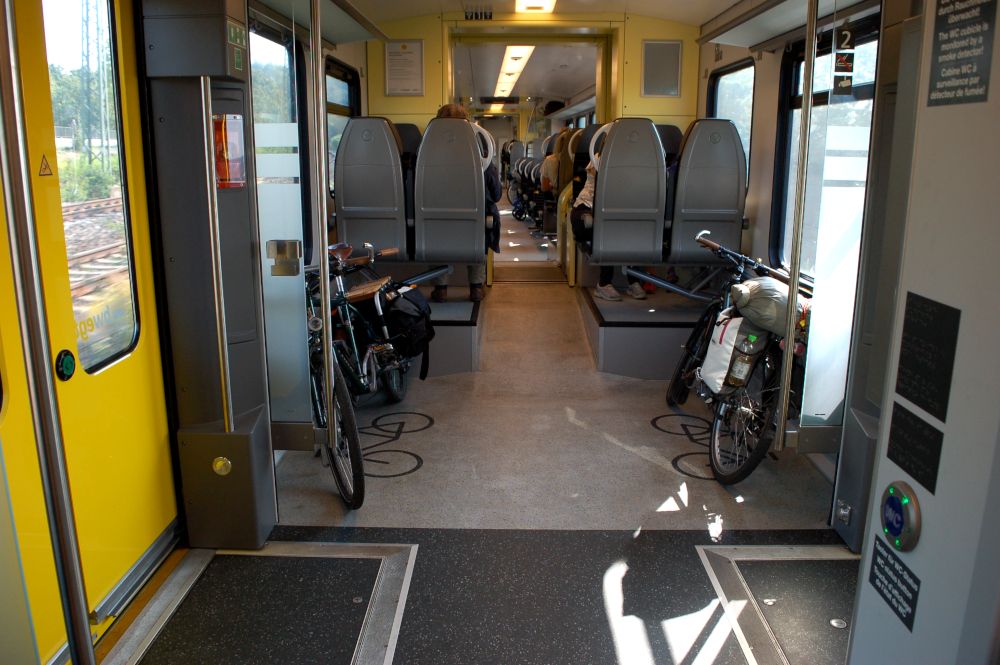 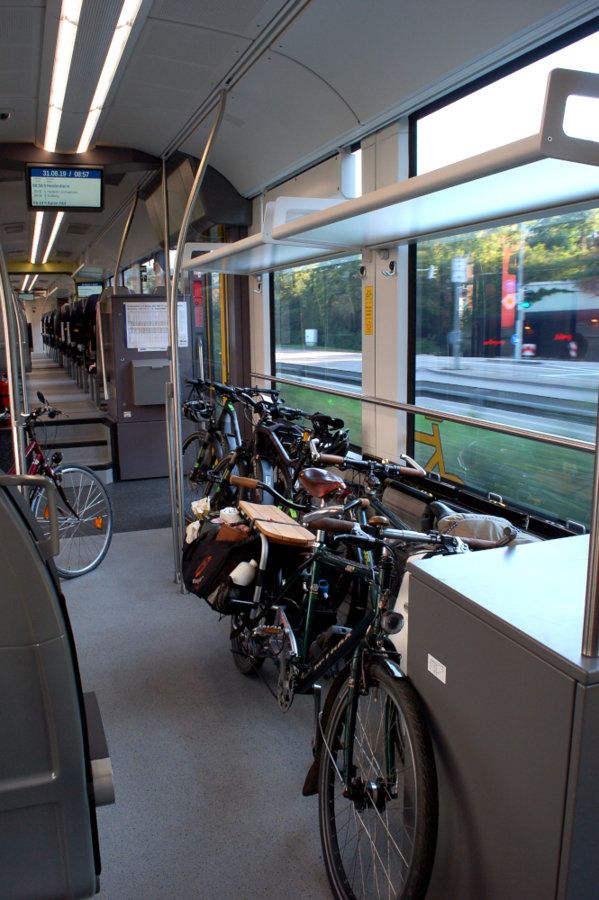 As you can see they are well used. Cyclists are generally pretty good at helping each other. Pushchair users on the other hand...

Platforms in rural stations are very low which means older trains without low floors can be hard to get your bike on because there are three or four steep steps to get up. In our state this is thankfully mostly just IR trains, but I don't know what they are using further north.

As others have said the DB website is very good. (Works better than their trains) If you want to check I'd suggest the Deutsche Bahn website which works very well and has an English option. If you click on "further options" it gives a tick box for "Only show trains with bicycle carriage (Buy ticket if needed)" at the bottom of the page:

One thing I found last week is that when I included the metro (S-bahn, Ü-Bahn or Stadtbahn) in my journey and ticked that box it freaked out. If I just typed "Stuttgart-Aalen" it gave me a connection.
Last edited: 1 Sep 2019
You must log in or register to reply here.
Share:
Facebook Twitter Reddit Pinterest Tumblr WhatsApp Email Link
Top Bottom