Ever amazed by your own stupidity?

We have this oven/microwave combi thing and you have to press buttons for programmes and timers and that sort of thing.

There's a button to increase the timer, and another to reduce it. The timer goes up to 90. So if I want a roast I press the up button, and stand around while it counts up. It starts off quite slow, but speeds up after a while, so it doesn't take too long to get to 88 point something - maybe 10 seconds or so. You have to be careful not to overshoot, because then you're back to single figures, and you have to stand there like a lemon for another 10 seconds. It's all a bit of a faff, but such is life.

The other day I discovered that if you start by pressing the down button instead of the up button, it immediately goes to 89 point something.

Ten years we've had it. 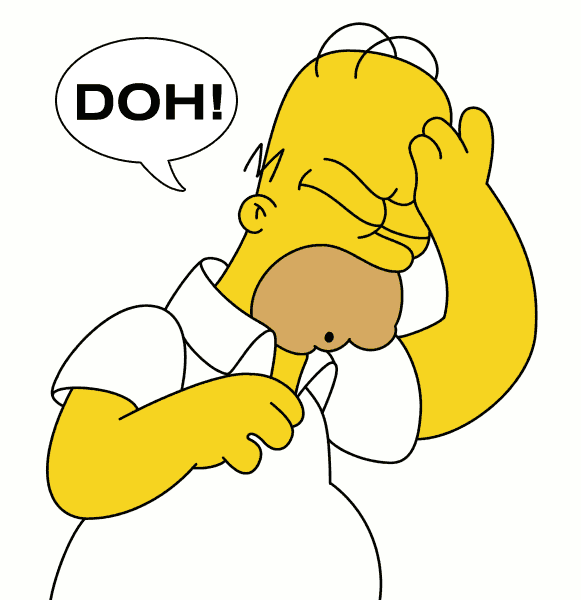 Just don't do the jacket potato for 89 minutes.

An old microwave we had was a dial - I actually prefer it for speed, than our 'digital one'. Except the dial 'stuck'. Black smoking spuds.

Talking of stupidity I tried to extract a crank with the nut still attached. I stripped the thread on an extractor tool that I'd just bought.

You put something in a microwave for 90 minutes?????

Well.......
I did marry the first Mrs Byegad! That stupid enough?

My Mr Fixit measuered my bathroom for new flooring.
I went to choose and order it today. While in the store I phone Mr Fixit to get the square metres needed.
I asked how he was and where he was going for his holiday etc.
Finished the conversation then realised I had not asked the question I phoned him for

Gran had never used a microwave; her potatoe came out fine. But she'd also put the mince pie in for 9 minutes. We came back home and saw a black plate in the garden with what looked like a burnt raisin on it, and the kitchen smelling of smoke!

When in Australia I had a beat up old van. You had to pull a switch out to turn the lights on. As it was so old and unlike any other car I'd driven, I just assumed the dip beam control had broken off or something, so I had to turn the lights off if every I encountered an oncoming car so as not to dazzle them with my high beams. It was about 3 months later I realised that the dip lever was just like any other car; on the right hand stalk

Never mind stupidity, I am a total div, not even knowing up from down.

roubaixtuesday said:
Never mind stupidity, I am a total div, not even knowing up from down.

When I picked up my new bike from LBS bottle cages had been fixed upside down. Cytec mechanics supposedly. Bike has never been back for anything.

I once took a rear hub and freehub to pieces to replace the sealed bearings. I don't have the right tools so it took me a long time and I had to be careful. I put it all back together, turned round and found one of the innermost spacers lying on the floor! I had to do it all again and damaged some of the bearings getting them back out. So I had to replace the replacements before they had even been used...


Chris S said:
Talking of stupidity I tried to extract a crank with the nut still attached. I stripped the thread on an extractor tool that I'd just bought.
Click to expand...

I did some similar crank thread extraction, in my case by screwing the extractor in with the centre part extended, which prevented the tool being screwed in far enough to grip properly.

I have done some VERY stupid things, several of which could easily have killed or maimed me. One of the worst of them was this...


ColinJ said:
I worked in a factory between school and poly. It made moulded and extruded products from plastic and inevitably there was a lot of scrap plastic to deal with so we had a giant plastic shredding machine to chop the waste into small, manageable pieces.

I think the idea was to chuck some plastic in, then stand back and switch the machine on. In practice, that was too slow so when I used it, I just left it powered up and fed the plastic in as fast as the machine could chomp it.

One day I was told to shred a huge quantity of rubbery plastic strips. They had been designed to be used to hold cable runs across floors, but were defective in some way.

I powered up the machine, which was so powerful that it sounded like a helicopter ready for takeoff. As usual, I fed the scrap in as fast as the machine could cope with it. Despite the power of the beast, if this were done too quickly, it was still possible to jam it up.

I had fed too in much plastic and the blades slowed right down as they munched away at it. I was still hanging on to the end of a length when the machine finally cleared the blockage and went back to full speed, grabbing at the plastic and yanking it in. The end of the plastic strip somehow got wrapped round my wrist and started pulling me in!

Fortunately, the machine stalled again and I was able to kill the power before I ended up in the blades.

Since then, I have heard of many cases where people died in such incidents - example.
Click to expand...

I once got my tie caught in the office shredder. My neck was being pulled towards the machine. I know I wouldn't have gone through but it could have broken my neck. Fortunately my yells were heard and someone hit the emergency stop - that was beyond my reach.
My tie was hung up over the machine as a warning.

fossyant said:
Just don't do the jacket potato for 89 minutes.

An old microwave we had was a dial - I actually prefer it for speed, than our 'digital one'. Except the dial 'stuck'. Black smoking spuds.
Click to expand...

I had a spud explode in a conventional oven, it was only a small one, I couldn't believe the mess it made.

dave r said:
I had a spud explode in a conventional oven, it was only a small one, I couldn't believe the mess it made.
Click to expand...

Or when you forget to 'prick it', then go to do it, boom, all over.
You must log in or register to reply here.
Similar threads