We've all done it, but a conversation with another member about losing a day or two fixing them...

Mate's son's bike - proper £150 BSO Full Suspension. Wasn't even 6 months old, but he'd left it outside for 6 months. That was quite a number of hour's work, new chain, new cables throughout and a thorough clean. You could tell it hadn't been used as the tyres were like new, and there was no 'mud' or ingrained dirt on it.

Another mate's bike - good spec GT full Suspension - needed some TLC, XT and XTR throughout, but the brakes were dead - burst oil bladder etc. He wasn't too keen on spending £50 on a set of Deore hydro's, so he left it in my garage for months. Finally got him to collect it. He then went and got the brakes repaired.

Another Mate's BSO - needed a general fettle, but another day's work - mainly cleaning the thing.

Neighbour asked if I could look at her daughters hubby's bike. Turned up to be a Scott G-Zero FX3 full suspension from around 2001, but, you guessed it, crudded up - couldn't see the jockey wheels for solid oil/grease, and the tyres were full of mud. Thanks.

Turned out all it needed was a deep clean, new tube, new chain and re-indexing of the gears. Once cleaned up, it was obvious it had hardly been used in the 20 years or so. Rear disc was all contaminated with oil, but after cleaning it, it looks like the brakes hadn't been used and the pads appear contamination free (I can lock the rear wheel up easily).

Fortunately these were all fixable without a stupid amount of effort.

I've never charged, other than parts. - I'll happily work for a bottle of wine ! You can appreciate why shops charge and folk balk at the idea, as it doesn't take more than a few hours labour and parts charges to come to not far off the bike's value new.
Last edited: 14 Oct 2020

I've mended a few but the last one took the mickey; turned up with a broken BSO that was awful, wouldn't pay for any parts. Also dropped off a bike that needed just adjustments. Not even a 'thanks'. Last month asked me to fix their electric bike. Oddly enough I said "no".

However, I worked hard in July on a road bike I'd sourced for someone on a very limited budget: he's a reformed addict who's made an effort to turn his life around. There's been wobbles but he wanted a road bike for his 50th; he got an 18 year-old lovely restored Peugeot running 11 speed Shimano 105.

I would prefer not to.

I've done it of course, I don't mind if it's fairly straightforward but I don't want to get into trying to get siezed parts off and that sort of thing.

I get them in all the time, some I take on & some I don't.
Problem is these people but cheap bikes, do nothing to them for a couple years & then find everything is knackered at the same time.
Soon as I say it needs tires, brakes pads/blocks, cables, chain etc they look surprised.
I just give them an estimated cost & take it or leave it.
This is the last one someone left at mine because I said it'll need about £200 spending on it, they left it at mine until I rang them to ask what they wanna do with it. They said I only paid £60 for it two years ago so I'll just buy another.
I kept it, cost me a couple pints, spent around £200 on it, it's perfect for a cycle path/ towpath bike for rides out with the wife! 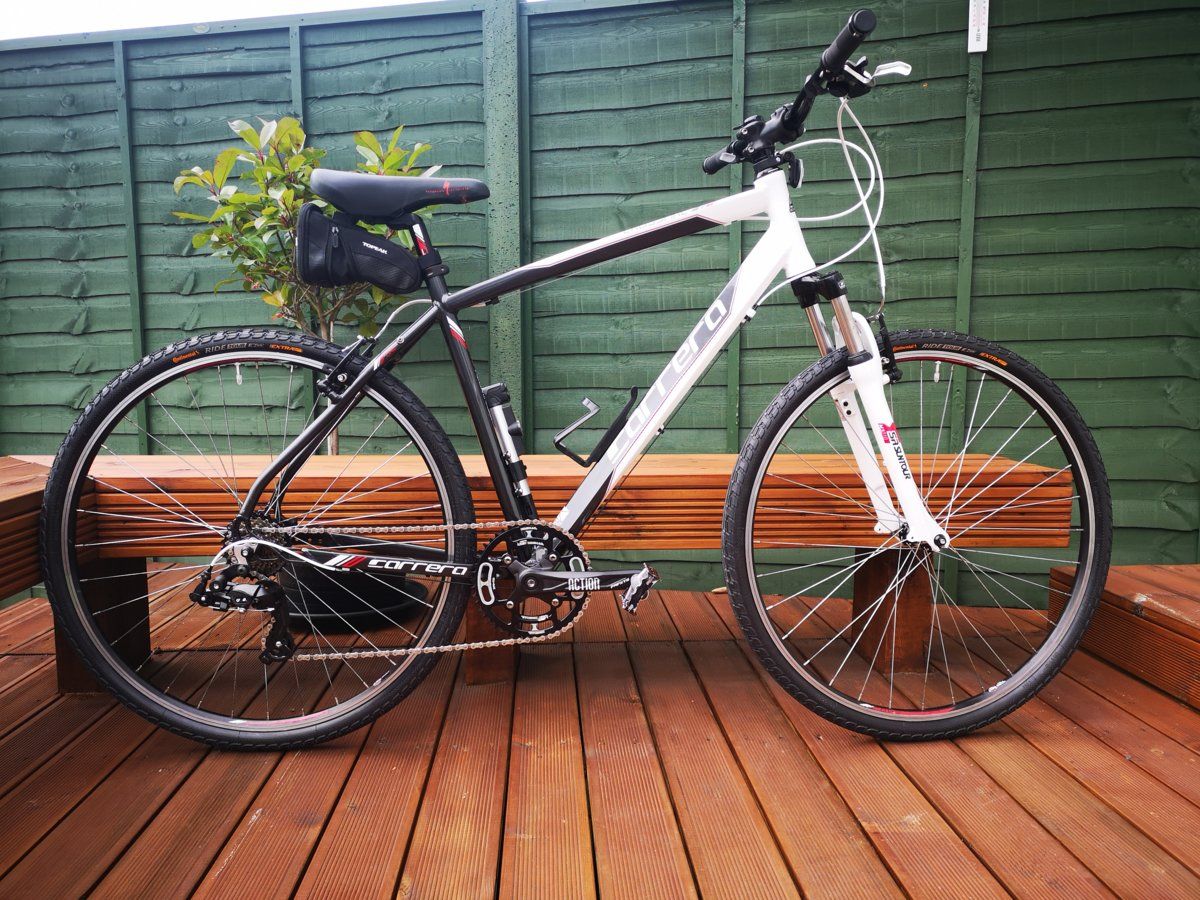 I got this from one of the local kids whose old bike I fixed up some six weeks ago. It's a old steel framed Merida which had got a coaster brake with a non functioning 3 speed. What happened I asked, dunno, someone borrowed it and this happened he said. Everything was there but it was just like it disintegrated. The rim was still true. 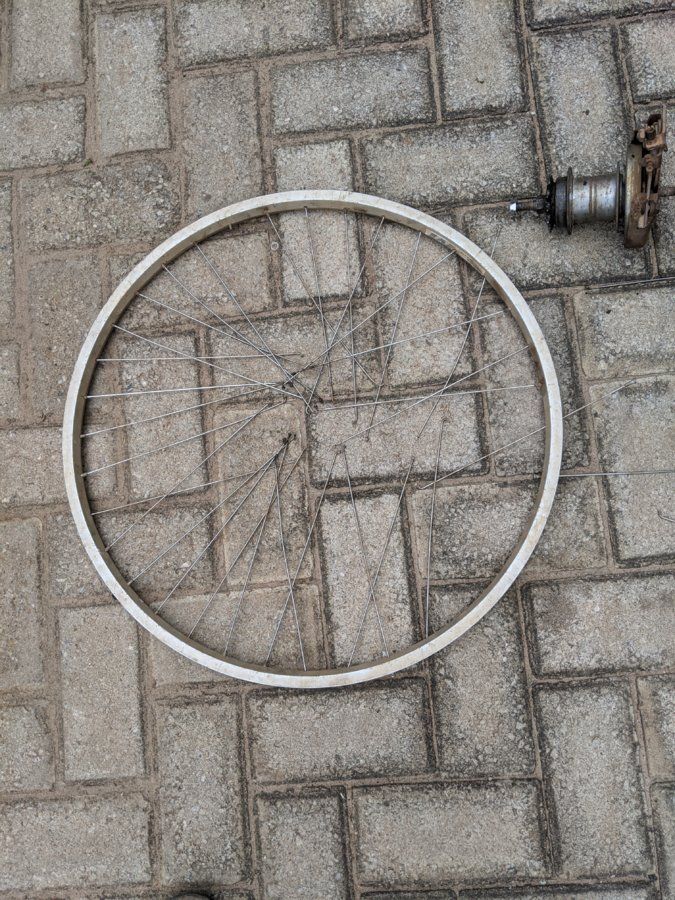 I've been asked, but when I them to sign a disclaimer the bikes never appear. Im more than happy to do it but I want my arriss covered, and it seems strange that once people realise i'll only do it if theres no legal comeback they suddenly lose interest in accessing my services for free.

Done it, but gave up when it was expected to be done at no cost to themselves.

A few have provided the parts needed, and it was a case of just fixing them into place.

I’m far too busy doing my own.

With the money I lose it’s more like minus £30 an hour!

You must be very well heeled.

Always fixing my ride mates bike,he is completely unaware of how to fix anything,had to index his gears on Sunday as he was clueless.This is the same one turned up for a club ride with cleats so worn he couldn't clip in,nice chap but

My next door neighbour's son went through a period of trashing his BSO MTB. Nearly every week there were punctures, broken spokes, brake and gear cables knocked out of place, lord knows what he used to do with it. In the end I got a bit fed up with it and just told him to try the LBS because the bike is now a wreck and needs a professional to sort it out, or a new bike.
He never offered any reward, not that I was looking for one, but a thank you sometimes would of been nice.

The reward for sorting out others' bikes is the expectation and consequent pleasure that the bike will be used and a bonus is a meaningful expression of thanks. Quite often these bikes need tlc and some small bits replaced because of neglect, deliberate or careless. Trouble is the chances are that this lack of use and neglect will continue, maybe after a brief spurt of enthusiasm. So this fettling offers one a reward IF the above criterion is met. If people are prepared (and able) to pay for an LBS to do the repairs, that's an indication of motivation to gain a riding dividend from their (maintenance) investment. I have really enjoyed sorting out bikes for others, but the self-perceived reward is moderated (both ways) by the use the bike then gets.
You must log in or register to reply here.
Similar threads