CharlieB said:
Perfect, just perfect.
A wiggly but very picturesque route over the best Fenland landscape Cambridgeshire and Norfolk has to offer.
The cloud cover broke to reveal a perfect orange moonset, Jupiter and Saturn just before we arrived at the the Welney Wetland Centre for pasties and lethally strong coffee.
76.3 miles and 100m of climbing seems a good balance and despite the problems mentioned passim, everyone arrived at the excellent breakfast location in fine fettle and spirits.
Thank you Claire for excellent ride leadership and everyone else for the customary FNRttC cooperative ride support.
Cool bath at home, some loud music (Muse) to unwind and now waiting for a delivery pizza (haven’t had one of those for yonks).
C
Click to expand...

Well, caffeine is a useful performance aid…they were doing you a favour!
OP
OP

Thank you @CharlieB :-)
The run up to the ride was a little stressful, between riders getting pinged and the weather forecast suggesting thunderstorms, but in the end the weather was good and our reduced group worked well together. *Edit* oh and the West Lynn ferry not operating due to self isolating too.
We nosed at some curiosities in between the colleges in Cambridge, then got cheered by partying students on the greens and River Cam.
Twinkling cyclepath lights accompanied us out on to the Fens proper. We had a first mechanical at Quy but made good progress up to Ely and along the gravel path. Here we had to say goodbye to our rider with the second mechanical of the night (his crank made a bid for freedom).
He hung out at Ely station for a couple of hours until the first train. If you're going to have a terminal mechanical, it was the best place to have it

After a brief comfort break at Ely McDs, where I (as the only female and leader) amused by the uncommon sight of queues for the gents

we headed to our midpoint stop at Welney Wetland Centre. By this time, we were about an hour behind my estimates, though that is the unpredictable nature of FNRing.
A barn owl escorted us partway, and as Charlie noted, the full moooon was amazing.
Refuelling completed whilst watching the early pink glowing sunrise over the wetlands, we stopped on the Welney bridge to appreciate the sun up.
Here a couple of riders dropped back post stop, one to Ely and another back to Cambridge.

Then through zigzag fen roads, we saw a pair of herons, hares, took in Friday Bridge to look at some more infrastructure. Here one of the group had an off. He was well looked after by @Gordon P, while Bob and Greg straightened his bike out and we got going again, taking it steady.
Next we pootled through Georgian Wisbech (and the rather less georgian Tesco Extra), where the third mechanical arrived in the shape of a split tyre. The TEC team marvellously sorted this too.
Up another cycle path past a blacksmiths, Peter H on FB has just reminded me we passed (B)Ollard Avenue....

Then we cycled along the Nene on a single track to the swing bridge and RAF memorial at Sutton Bridge. Here we had a pause to caffeinate, snack, and chat before setting off for the final leg. I phoned our breakfast cafe to warn them we were running late and they were very chilled about it :-)
Following the Nene port then turning north-east towards King's Lynn, the headwind made a guest appearance

as we made our way through crown estates, with workers cottages marked with the royal cypher from different monarchs' reigns.
Arriving at the ferry terminal, we divided into "off" and "on" road groups. The off road group (led by me), followed the riverbank on the West Lynn side, giving us views of King's Lynn old port, Customs House, Minister and our breakfast stop. We joined up with the on road group (who'd done the cyclepath) to cross the bridge, then up the east bank cyclepath, after a few more shouts of "Bollards", we reached Marriott's Warehouse for breakfast. Loads of outdoor seating, a bit of covered bike parking and a view of the quayside.

After waffles, Full Englishs, coffee, chatting about the ride, general restoration (and applying of sunblock as it made an appearance) , various riders made their way through the confusing one way system to the station.
James R, Andy B and I set off back to Ely. Traffic had picked up post the NCN11 path out of Lynn, the usual section before Saddlebow of antsy drivers being an annoyance.
Then we settled down to cross a few bridges (I bagged a new one), sunny Ten Mile Bank (with a lovely breeze), Littleport descent with ice cream in Ely at Hadis. Chocolate orange for me, yum!
I turned for home making it 180km, James R went for a rest under the trees at Palace Green then cycled onto Cambridge for 214km, Andy B onto Girton for a nap then drive home.

In summary, an eventful evening/morning, with some lovely highlights, it's intense leading a bigger group but very rewarding 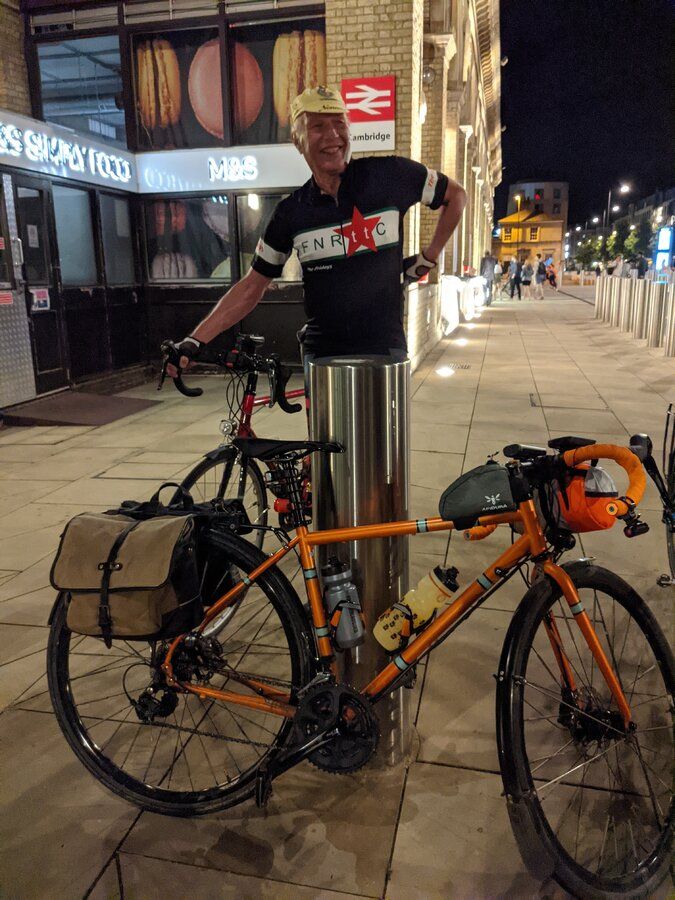 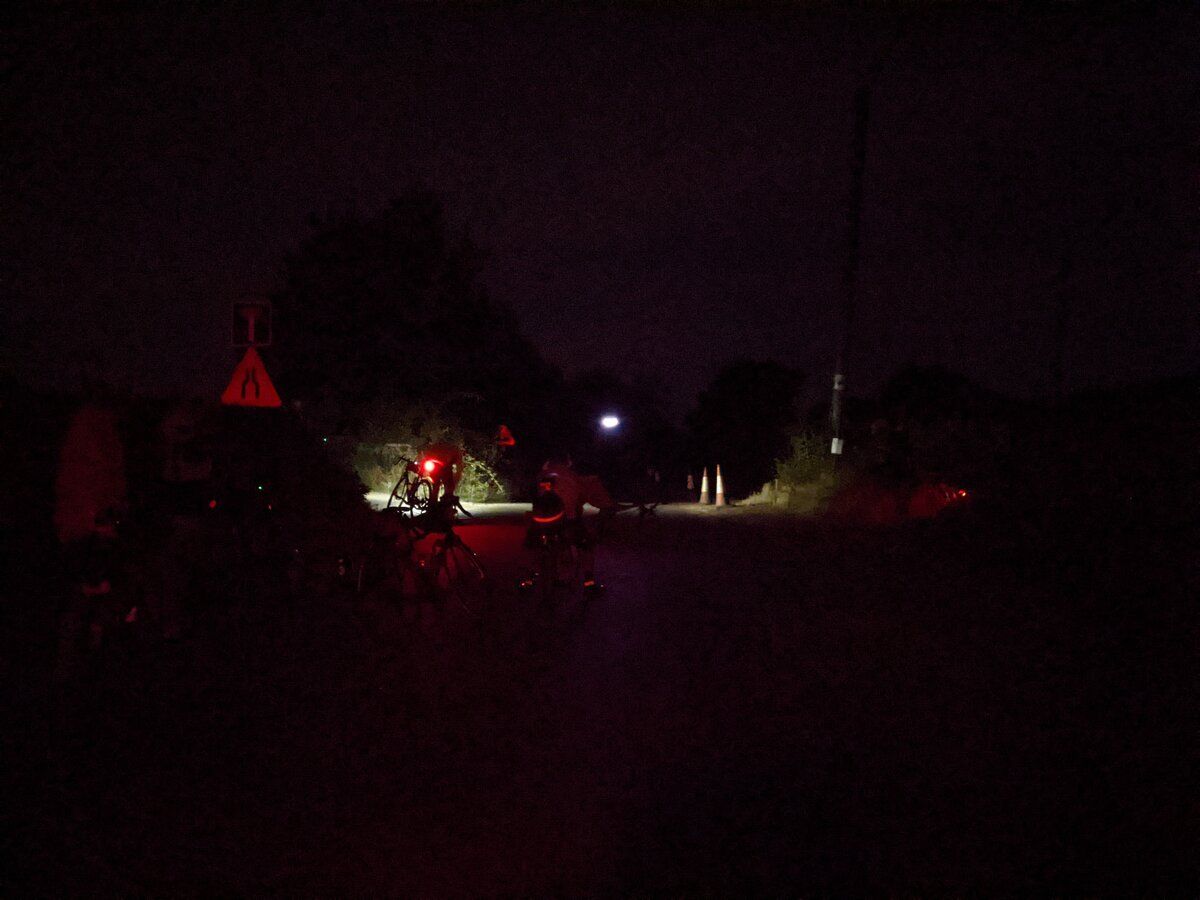 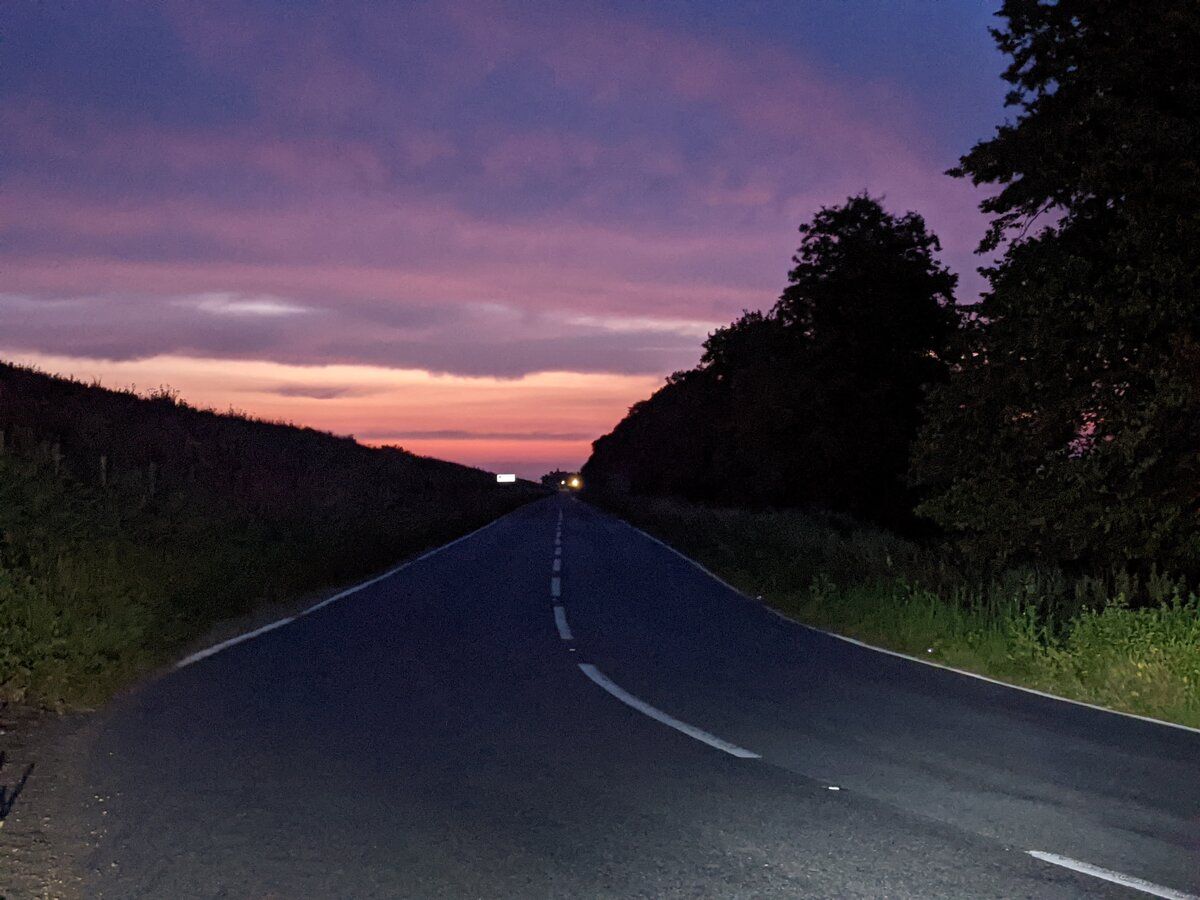 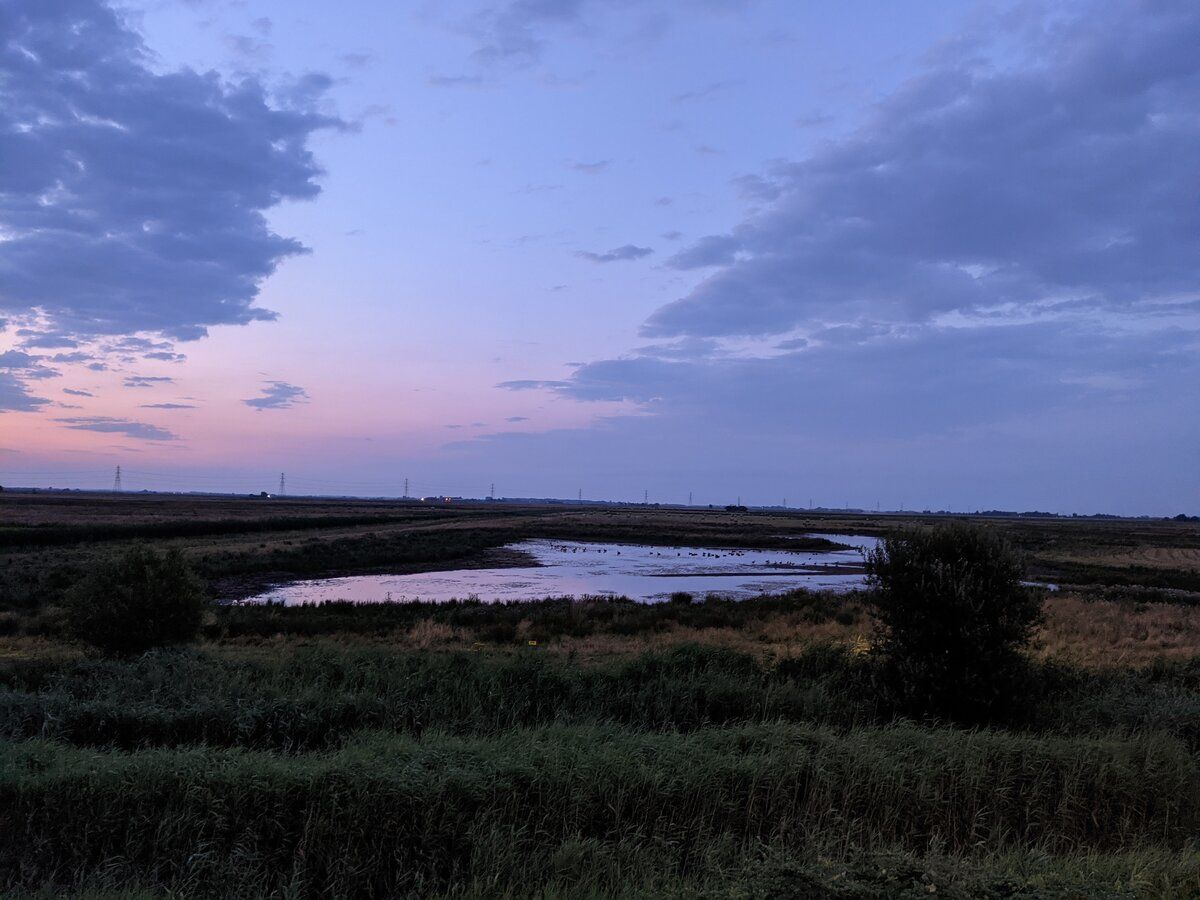 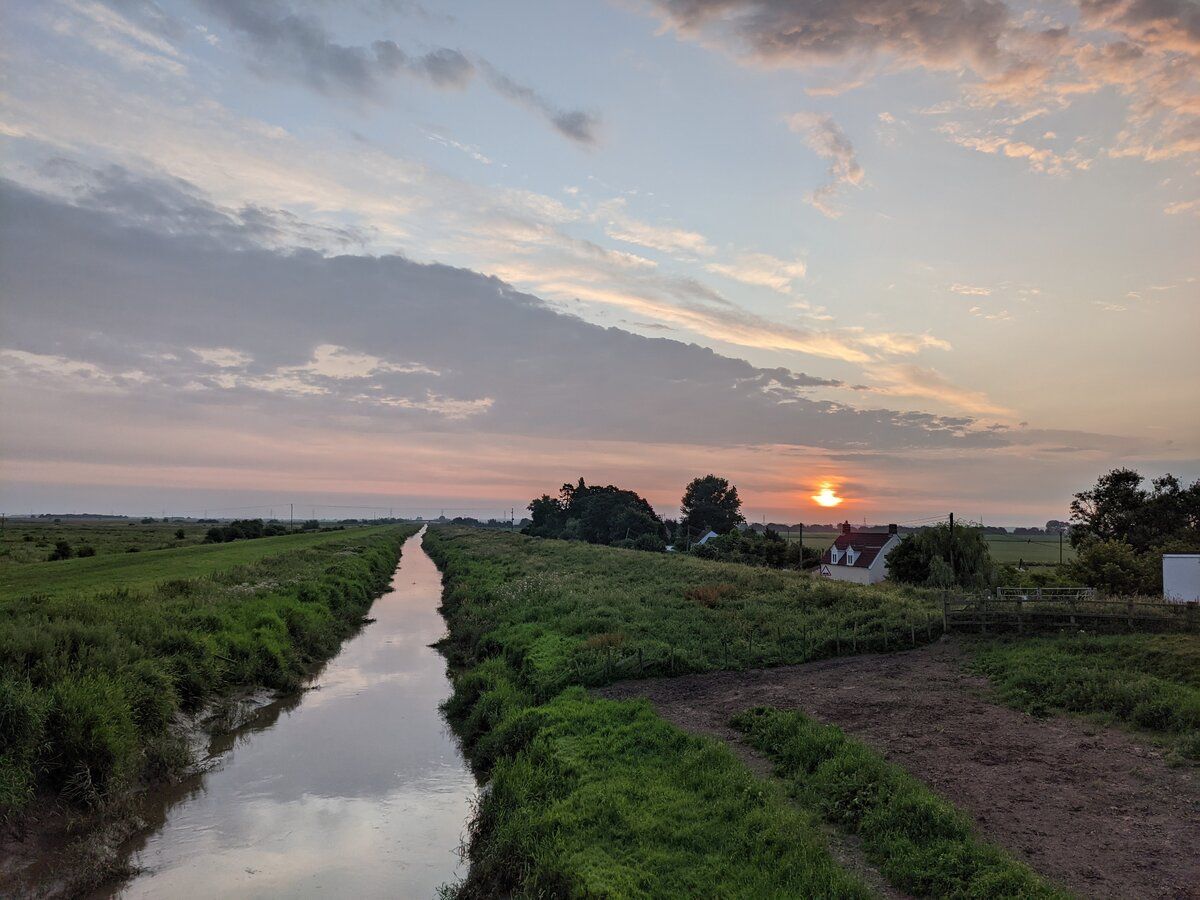 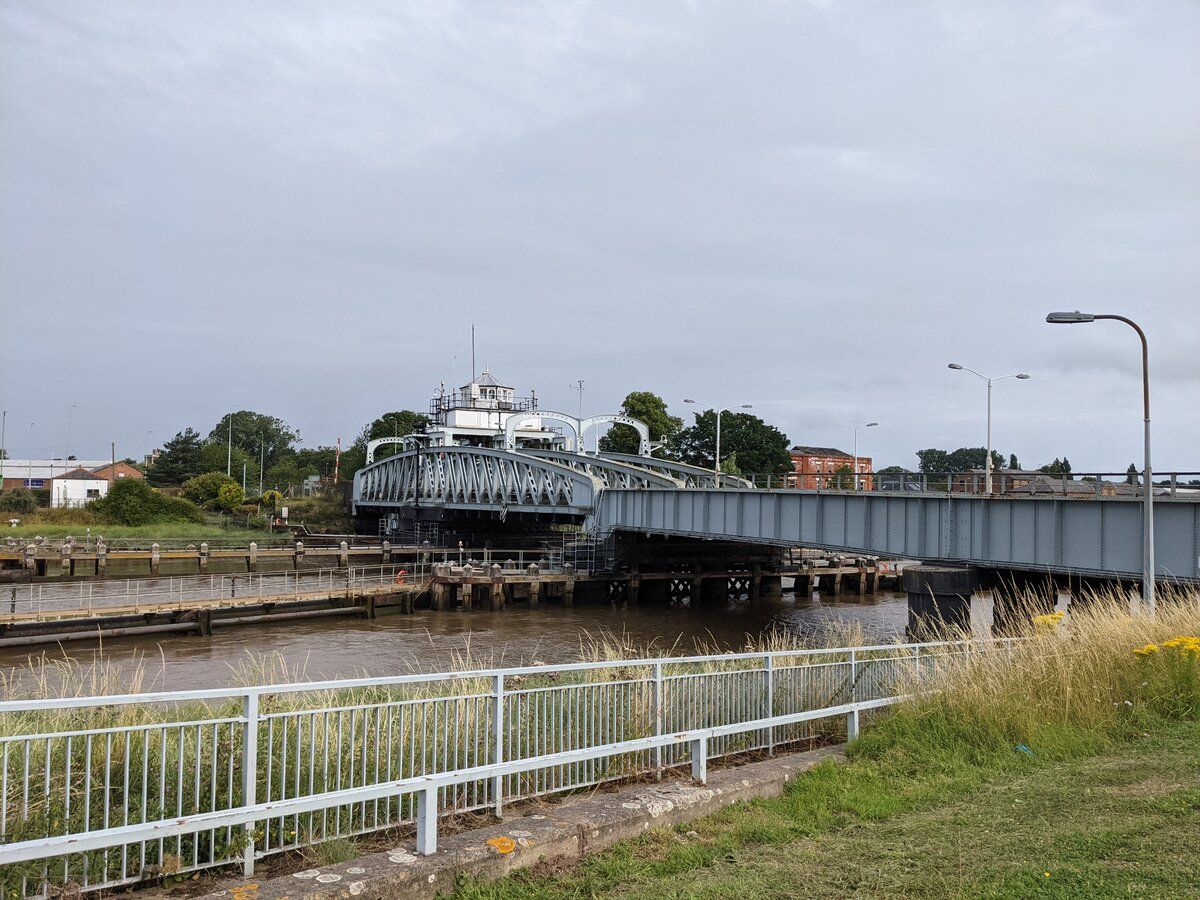 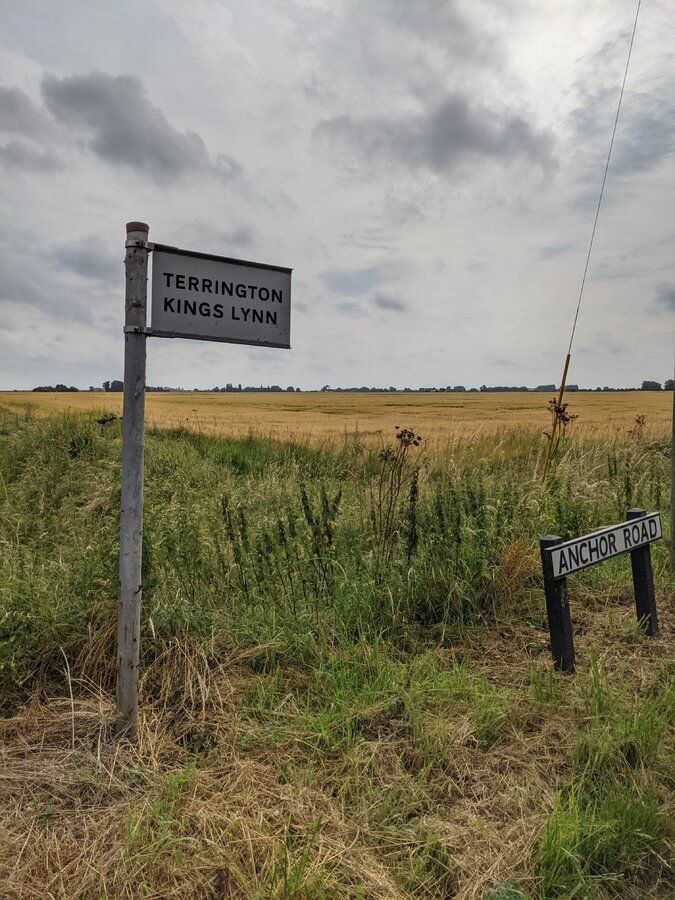 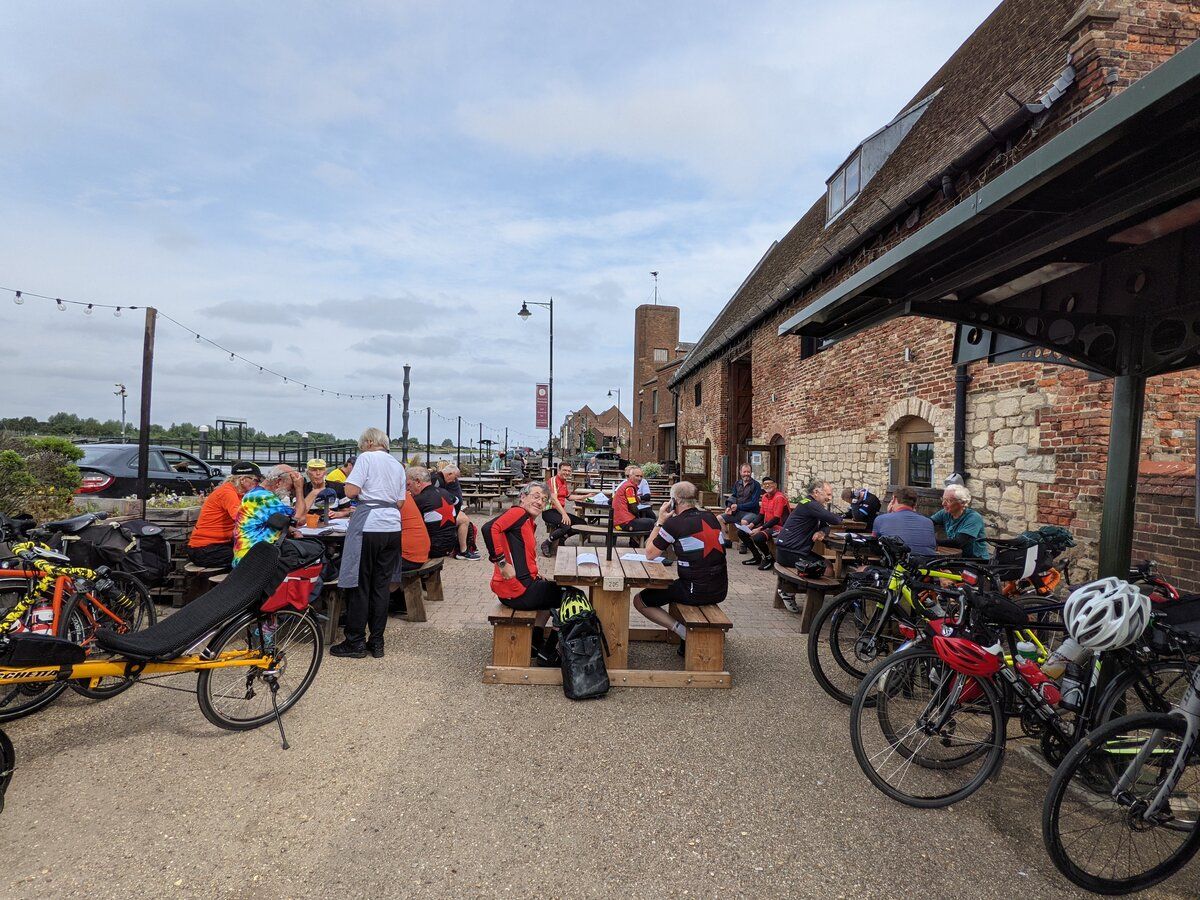 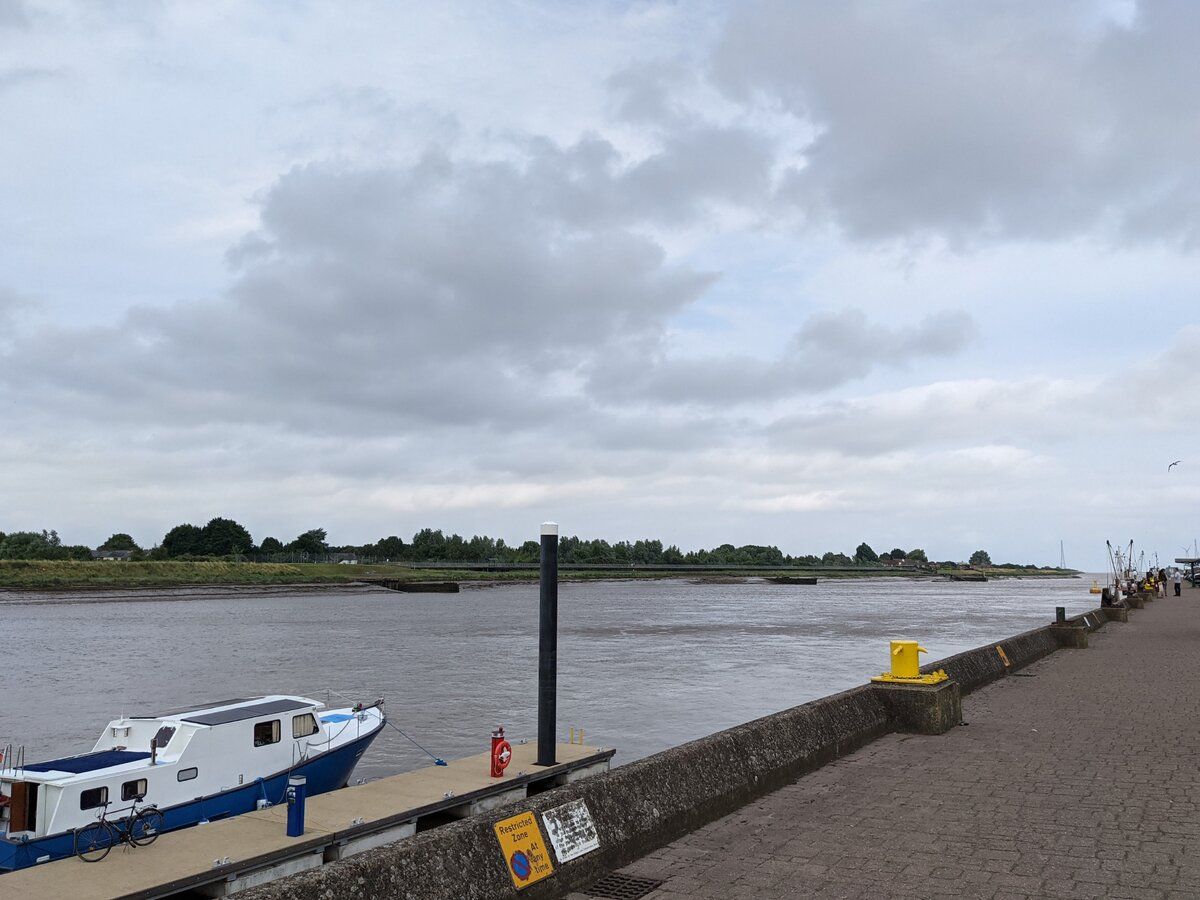 Back home today (Sunday) at lunchtime, less traffic and fewer veg trucks on the A17. Very hot and muggy in the Premier Inn Kings Lynn. Nice pasta on Friday evening pre train journey to Cambridge. I chatted to another cyclist on the platform who was going to Cambridge but alas not a night rider, he did however spend most of the journey looking at the website so we might get a new member.
En route the train either ran over something or hit a pothole and my bike came crashing down, no bike specific carriage so it was in a wheelchair space. No visible damage but my headlight suffered internal damage which became apparent on the first unlit bike path when the light went out, came back on, went dim then out for good. Rode with several different members who kindly shared their lights but on the narrow off road section it was very stressful, but not as much stress as poor Adrian suffered. Note for future rides a spare light needed. Several other riders said their Busch + Muller dynamo lights had not been as reliable as expected. A Son Edelux 2 is now on order.

No hills were climbed but the fairly constant cross/headwind made it a good test, and my legs certainly felt the 120+ Kms.

A very nice refuelling stop was equalled by a lovely breakfast stop by the river. 10/10

Many thanks to Claire for her route and leadership skills and everyone else for their company.
You must log in or register to reply here.