Registration is now open for the London to Cambridge ride. Not quite the coast but there is a DNA path.
Northbound out of the capital, midpoint stop at the delightful Birchanger Services, then continuing to Cambridge for breakfast. About 100km, 600m climbing.
See you at the National Theatre

You know you want to.

Drove down yesterday. Relaxing in Newmarket Caffè Nero. See you all later.

Two of us joining the ride after a long absence. Ambitious plans to ride back to Oxford are canned in view of the weather forecast for Saturday; plan B involving Guinness to be implemented. See you at the NFT later.
OP
OP

See you all a little later :-)

Have a good one. Winds look light but favourable. Plus just as important. Dry.

Made it to Cambridge Station unscathed.
Last edited: 22 Aug 2021

Some pics from the ride; 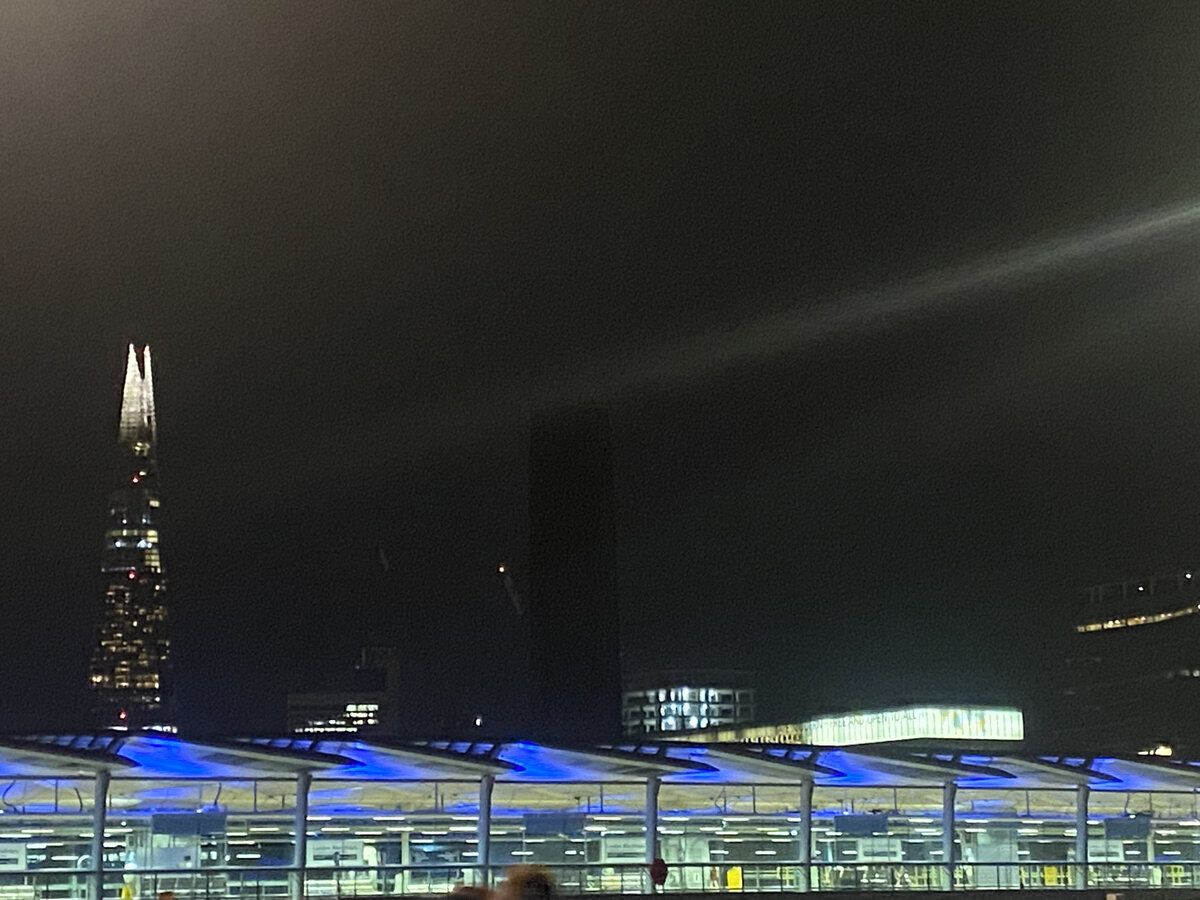 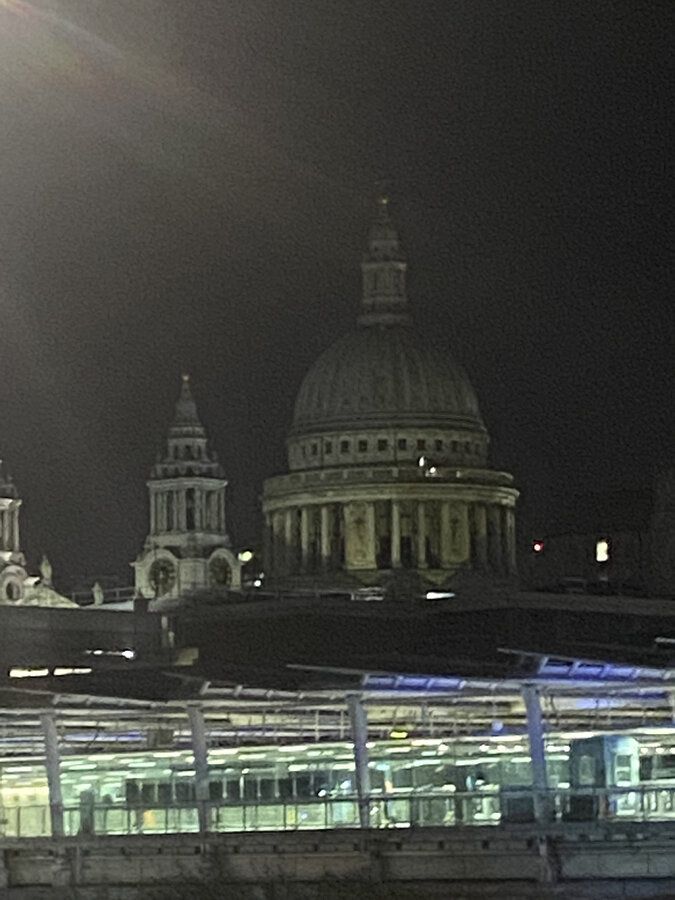 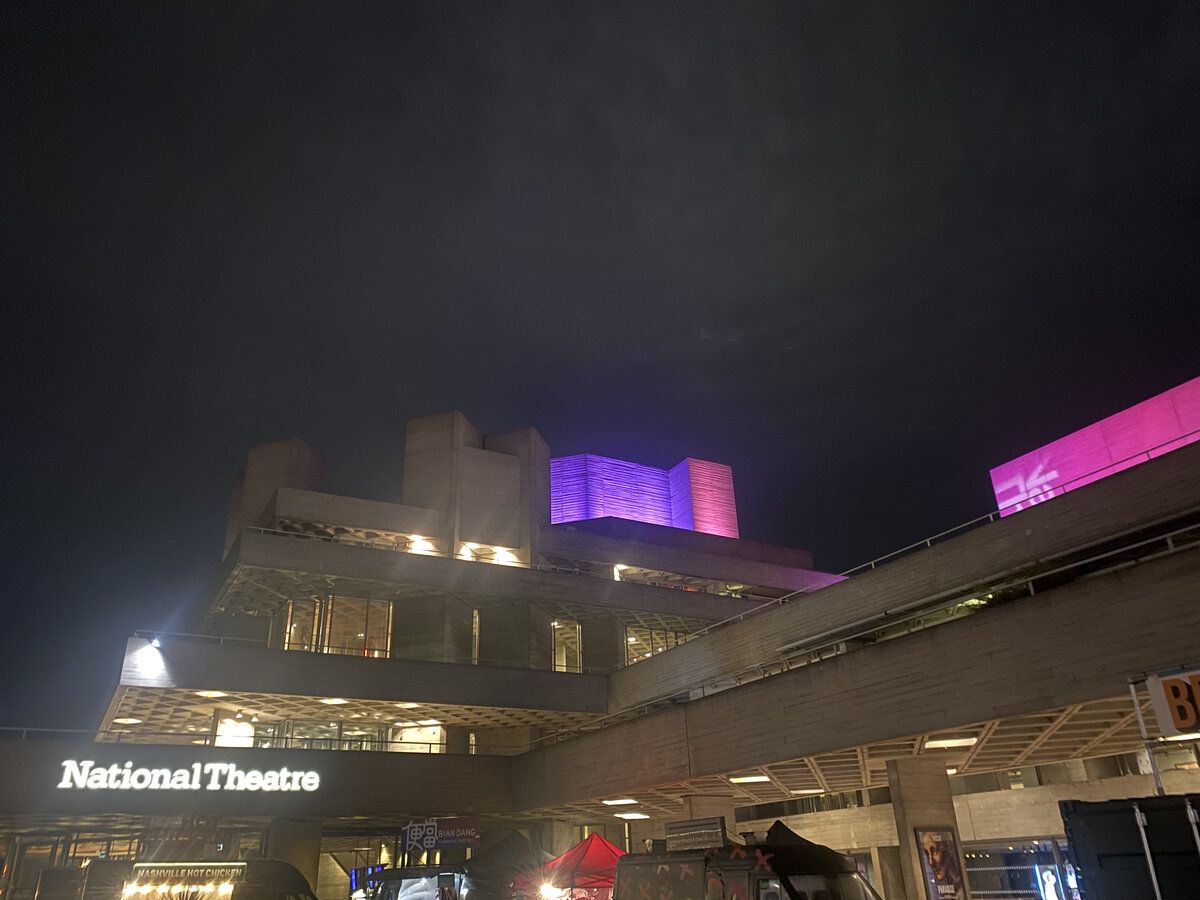 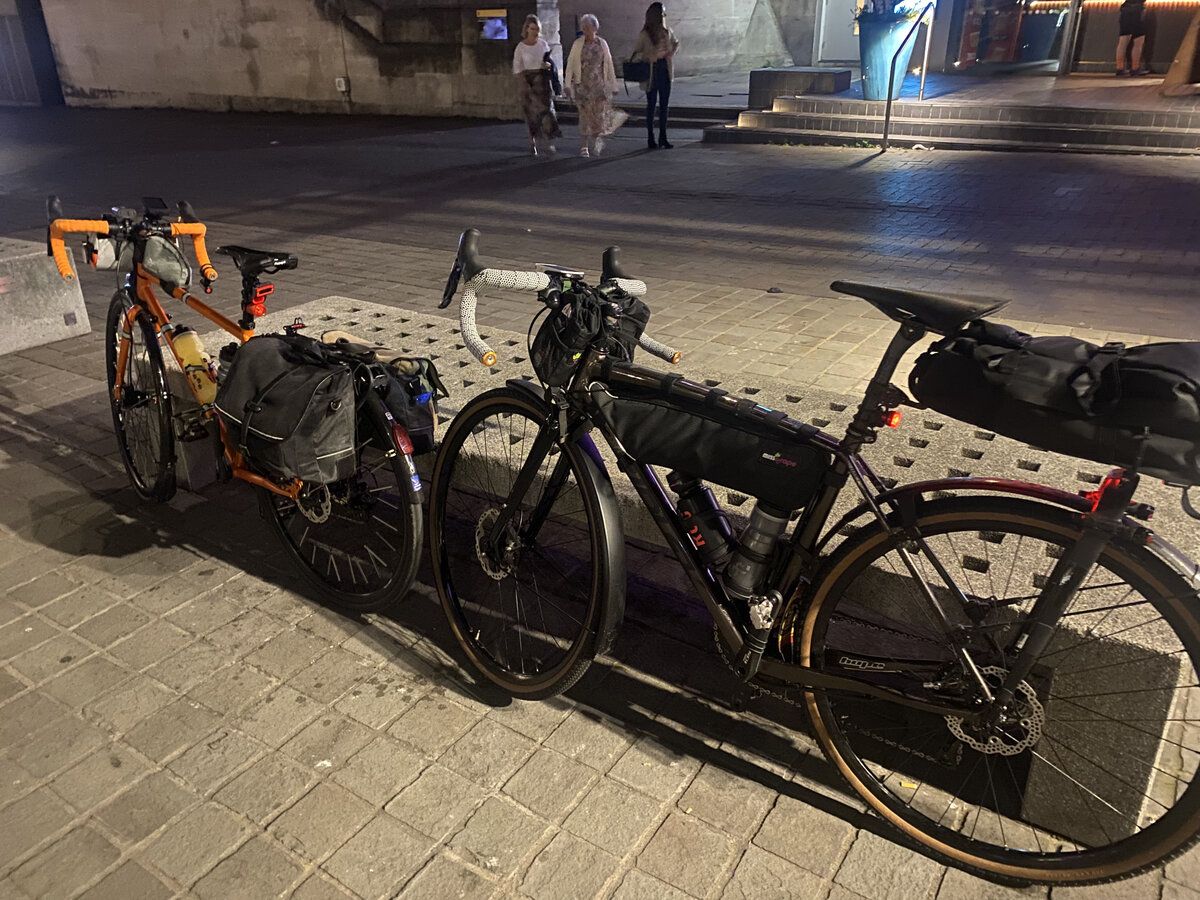 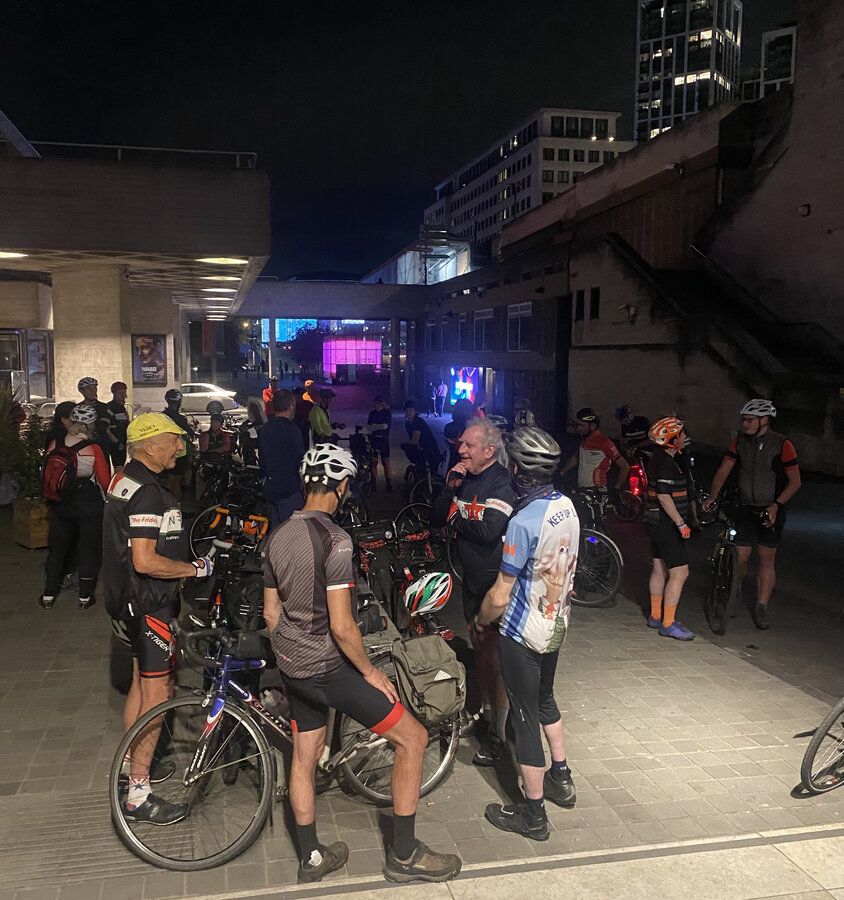 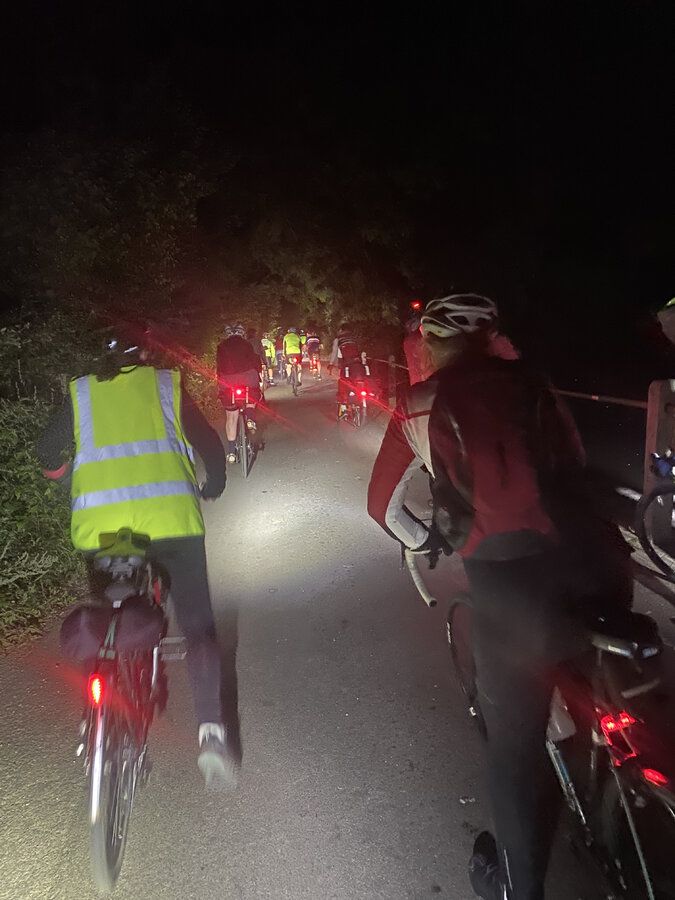 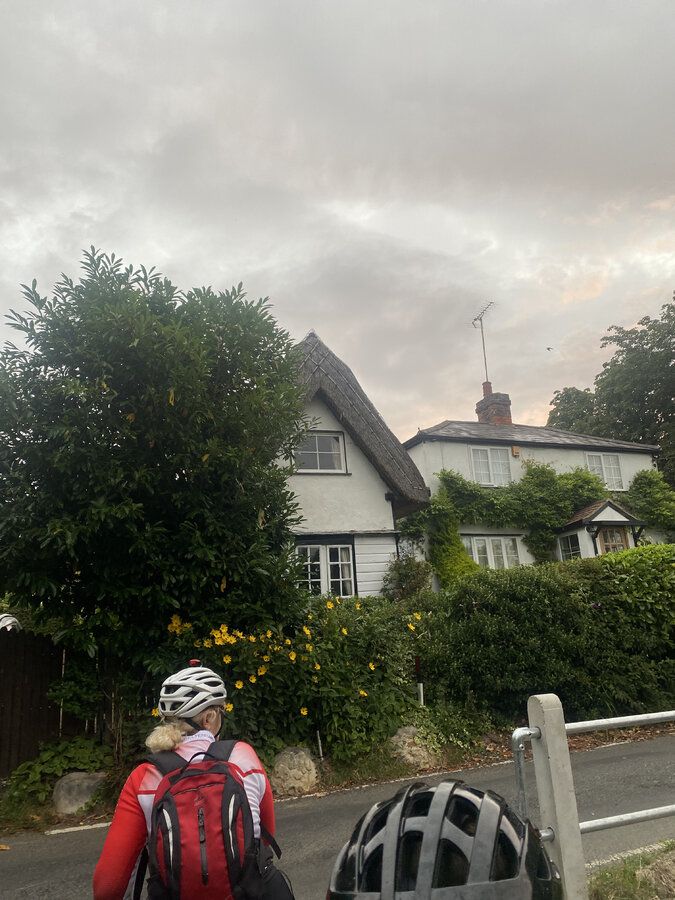 Right…that was rather eventual, for the wrong reasons (ambulance required, though thankfully injuries appear to have been minor). We were rather late into the delightful Birchanger Services, again, but unlike last time we weren't sopping wet and only two felt inclined to bail at that point, not the entire ride. And it was a bit headwindy on the last stretch, though at least it was a good workout.

Back to the beginning/end of the evening. Late shift at work actually made a few minutes for once, but just for a change, there were delays on the trains…I wasn't sure how much time I'd have before the next Waterloo service, so opted to wait at the station rather than get changed first. Eventually got a train at about 2210- not sure if it was the 2008 or 2038 service…It ran on (delayed) time so into Waterloo at just after 2330, so no problem making it to the NT in bags of time for reintroductions and the safety talk. Nick made the usual entreaty to check tyres…

…Someone didn't listen. We set off a fraction early, and then came to a rapid halt. On Upper Ground (!) I spent 20-odd minutes waiting for the tail end, and the rest of the ride waited on Blackfriars Bridge, thanks to a deflation. Onwards, eventually, and mostly steady progress through many sets of lights and virus carriers on nights out (Delta variant? What Delta variant? It was having a jolly good spread that night). And then, Lea Bridge Road. Now, for those not familiar with the cycle routes being built in that London, this one is one of the prettiest in terms of design details, and one of the ugliest in terms of actual usability for vehicular cycling. A Dutch planner wouldn't have done it that way after half a dozen strong spliffs. Sharp angles where there should be curves. Twisty bits where there should be straight. Weird pointless changes of direction all over the shop. You have to be on your toes, or you'll come a cropper. And someone came a cropper. If I remember correctly the details relayed to the front of the ride, he missed a dropped kerb, caught a corner with his wheel, and went down hard. Fortunately, the rider was badly shaken but otherwise only minor injuries, ECG & CT checked out OK. Kim dropped out to look after him (she joined us in Cambridge for breakfast), Nick and Ross rejoined after about 40 minutes once the ambulance had arrived.

By this stage, we were obviously massively behind schedule. Nick and Claire took the decision to minimise faffage and to cut the Birchanger break short, or we'd be in Cambridge in time for brunch rather than breakfast. On into Essex. Quick loo stop at a garage in Epping remained a quick loo stop. Intended quiet photo op in Matching was…unmatched. Not for the last time on this ride, a TEC (@Elybazza61) suffered a fairy visit. We didn't get to Birchanger, its almost impenetrable pedestrian access (achieved by clambering across grass and high kerbs) and its mostly-closed retail options, until five. If you couldn't get it at WH Smith, you were out of luck. Rather than risk poor choice and epic queueing, I'd opted for a Morrisons meal deal, again. Nick decided to bail there, (as did @Mr Orange), so Claire became sole ride leader.

On we went after forty minutes or so, into the dawn, and our pace picked up somewhat, thankfully. The literal high point of the ride (400 ft!), after a very rolling route, came just before seven. There was a temporary split in the ride when a waymarker, under the impression the planned break into two groups had happened, left their post, so the actual tail end ended up taking a more direct route to make up time. Twenty minutes after that 'summit', we got to our final mid-ride stop, Flint Cross garage, about a dozen miles from breakfast. At this point, the original plan was to split the ride into 'speedy' (Claire) and 'full value' (Nick), to avoid swamping service at the cafe. New plan: 'speedy', 'slightly less speedy'. I forget who led the second group, but I joined the first as all-upper. It did what it said on the tin. Hard work, especially in what suddenly seemed like a fairly stiff headwind, but fun. I frequently lagged behind somewhat, but that was OK. By this stage, my GPS was giving me a nice countdown to that breakfast.

Into the city at about 8.15, so not much later than my last visit, thanks to the pace and lack of faffage. We swung by the station, and those who wanted to head straight for a train did so. On the last (lockdown, four distanced groups) ride here, I did that (after tea and a bacon roll from a van). I was determined to get a sit-down breakfast this time, despite the trip home. Then…all-upper had a fairy visit. I kid you not, half a mile from our destination. At first, I thought **** it and just rode anyway, easier to limp on and sort it at the cafe, but then then it got a bit too squishy, unrideable, so walked the last stretch. There are areas of Cambridge called Petersfield and Romsey. Nope, they're somewhat SW…

Espresso Library had opened at 8.00, so our 8.30 arrival time was no problem. For breakfast, I opted for builders' tea (a decent, four-cup pot), and rather splendid porridge (with chia seeds, nuts, banana and berry compote), even better than Picnic in Reading. And then, to sort out the American Patient. An (entirely unrepentant) confession: I don't fix punctures, through lack of practice- I prefer puncture-resistant tyres that generally do their job, and those puncture-resistant qualities do not lend themselves to getting tyres on and off, at least if you lack nous and brute force. Tried and failed to get wired Marathons on at home, had to limp Chutney home after punctures a couple of times (20 inch wheels are even worse). If at all possible, get a professional to do it. I do enough swearing already. Dave in my former LBS could fit a Durano Plus on with bare hands (no chance for me!). I still do what I can, anyway…So, time for some practice. Through-axle out easily as always, wheel out after some wrestling with the chain, then after a bit of a fight, the tyre and tube followed. Folding tyres in a larger size on a wider rim (and after a few years of hard use) are rather easier than the ones I've fought and lost against…No idea what caused the flat, I felt all round the inside of the tyre, nothing, nor any visible holes in the tube. The trusty mini pump had somehow become separated from its handle, but that screwed back on. Tube slightly inflated, I got it back on rim. @robjh kindly stepped in to help, and got the tyre back on without levers. Once inflated (usual reliable pump service resumed), there was a bit of fiddling before we got the correct alignment for that through axle to go back in, but job done.

I left @Gordon P (booked on a later train) and headed off to the station, via an Eric Morecambe route. Thanks to taking some of the wrong roads, missed the next Kings Cross train, but not too long for another. Ended up in a vestibule again, there appear to be no actual cycle spaces on these trains. And then, to Waterloo…eventually. Kingsway, Strand & Aldwych were closed due to pedestrianisation works (a long programme, but the switch of Aldwych to two-way traffic and the closure of Strand to vehicles was happening this weekend), so that meant a walk, and missing the noon train south. So the 1230 it was. Home just after two, and then a nap. Missing Blackpool (leave cancelled before I knew cycle reservations were, in fact, possible), and Barry (DJ Shadow that same night), but I'll be back for Shoreham. Thanks everyone!

Small point. The very kind "Man in a Van" who witnessed the crash dialled 999 and stayed with us for what seemed an age, finally gave up on the very stretched Ambulance service and ferried the injured party plus one and two bikes to hospital.

Not being used to "London Ways" does every street corner host a party every Friday night?