I came across some old photos of an incredibly naive JoGLE that I did about 20 years ago, and it had photos of the bike. I have a love-'em-and-leave-'em relationship with bikes, I love them when I'm riding them regardless of how good or bad they are, but don't really miss them when they've gone. But wondered if anyone knew about or recognised this particular model or the range it would have been from: (original photos weren't great quality)

It was bought in spring 2000 from a (the?) bike shop in Coventry, and the guy said it was one of the last ones to be built in the UK, before Raleigh moved all of their manufacturing abroad. It looks like a triple, and I remember it had a Megarange on the back, would that have been an 8 speed cassette? Would the Megarange have been up to a 34 cog? I remember it had a big jump between the biggest and the next cog, like there was a cog missing, but I used it A LOT on the trip so was very thankful for it. The shape of the handlebars look quite distinctive to me now, but maybe that's because I'm used to the nondescript bars of most hybrids these days.

I assume the wheels were 700, and based on that would anyone want to hazard a guess at the frame size? I think they knew it was too small for me but probably wanted to get rid of stock, so I think they fitted a longer seatpost. It didn't stop me from crushing my ulnar nerve as I was leaning on the handlebars too much, so by the time I'd got round the north and west of the NC500 I could barely hold a pen to sign my debit card slips!

I had no punctures from JoG to just past Kidderminster, and then had two or three in a row, which turned out to by the sidewall of the stock rear tyre having split (pretty sure they were stock, don't remember paying to upgrade them, doubt I would have had the cash, and I wouldn't have chosen tan sidewalls). Luckily I was about 6 miles from home, so got collected by car, got the tyre replaced, and went back to ride the missing miles on my rest day.

The handlebar bag was a great buy, and one of my overwhelming memories of the trip was cycling up the big hill on the A838 south of Durness eating a bag grapes one by one.

Looking back I honestly don't know how I managed to do the whole thing as the furthest I'd ever cycled in a day before was 40 miles, and that was a one off, so I just kind of rode until I was hungry/thirsty/tired/saw a photo opportunity, then carried on again, cycle rinse repeat - the longest day on the trip was 135 miles because I got to the Lakes and all the hostels were full of schoolchildren so had to keep going. The bike did well, including a few other shorter tours afterwards, until I gradually used it less and less, and then it got a puncture on the way into Manchester University, where I left it outside the Computer Science building fully intending to fix it and take it home, but actually watched parts of it get stolen over the next few weeks until all that was left was the frame and then one day, it was gone.

Looks like a Pioneer to me, what do you reckon @SkipdiverJohn
S

It could possibly be a much later incarnation of the Pioneer, but it has little in common with mine apart from sharing a 700c wheel size. My Pioneers are ultra-traditional with horizontal top tubes. The bars on the OP's pictures look similar, but not identical, to the riser type fitted to some Pioneers plus the 531-framed predecessor, the Gemini.
The info from the bike shop would have been correct if bought in early 2000, as Raleigh ceased building frames in the UK at the end of 1999. The assembly was still carried out in Nottingham though for a couple more years, but the days of pretty much every part of a Raleigh bike having been made in-house by Raleigh, were very much over by then.
OP

Found some old Raleigh catalogues online, and I think it was probably a Raleigh C40, one of their Cross range, apparently that was their term for hybrid at the time. Don't know how much that range was sold in the UK, most searches come up with US results and later versions have front suspension forks which I'm kind of glad I didn't have.

Although looking at the photos, the bike below seems to have grip shifters and an adjustable stem, so who knows. 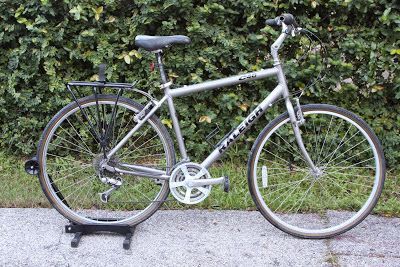 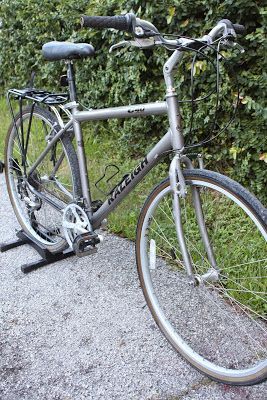