Hi All --- cycle route with Trike help anybody

Thanks in advance for any replies

Can't help with routes etc as I live in Leicester.

Use google maps on street view, I do this and I have a trike

I ride recumbent trikes and avoid off road routes. Why? Because they have stupid barriers at silly places limiting how fat anyone can use the route unless equipped with a narrow road bike. Except then the surface will be so poor the tyres on the toad bike will be too narrow.

Thanks in advance for any replies
Click to expand...

I've ridden to Glasson Dock with @ColinJ and chums - pleasant part of the world.

I'm not sure how trike friendly the Bay Cycleway is, and I think there's a limit to the amount of pre-ride research you can do.

Suck it and see, but be prepared to turn back if you do come across something you can't get through.

I think the best bet is probably to ask about specific paths and hope that someone with local knowledge replies. For example, @MontyVeda could tell you about Glasson Dock to Lancaster and Morecambe.

A lot of paths now are being given a very good surface, but those barriers keep on appearing. The ride I did with @Littgull last week had a lot of good quality offroad sections but we encountered quite a few 'A-frame' barriers plus a few railway sleeper type obstacles that involved lifting the bikes over.

Thanks in advance for any replies
Click to expand...

Regarding glasson dock to morecambe...
I think there's a single post in the middle of the path at the start of the gravel path at the Condor Green car park, and there's a gate where that same path joins St George's quay at Lancaster (it was being used as a rat run by motorists!). There is a short on-road stretch at the top and of the quay, but barely any traffic. The shared path along the quay does has a few tight spots, but should be OK I'd guess. And the old railway from Lancaster to Morecambe also has posts to stop cars getting onto the path, plus a level crossing with gates (used to be kissing gates which you'd never get a trike through but not anymore).

Cheers anyway – and thanks to everybody for the replies so far

jambutty53 said:
Thank you Monty Veda for the offer of a Recon ride – that really is good of you to make the offer

Cheers anyway – and thanks to everybody for the replies so far
Click to expand...

You're welcome... I have friends who live in Morecambe and do the route often so it's no big deal, I'll just pay more attention to how wide some gaps are next time I go. The railway crossing at Morecambe 'used' to have kissing gates (as shown on street view) but now has a pair of normal gates. I only open one to get my bike through but am pretty sure they both open (otherwise wheelchair/mobility scooter users would struggle)... but i can double check this for you. The cycle route does go on to the main road for a short stretch between Frankie & Benny's and the promenade, but just stay on the pavement... everyone else does and cross onto the cinema side at one of several crossings, then you can get over to the prom opposite The Midland Hotel (lovely white art deco building). From there you can go either way along the prom, on which cycling is allowed these days (I recommend Heysham, there's not much at the other end, but the view across the bay is nice on a clear day.)

Regarding the other route... at the Lune Aquaduct, there's a slope to get bikes, chairs and scooters from the old railway up to the canal tow-path. It has chicanes but they shouldn't be a problem. It's quite new and not clear on google maps (not shown at all on street view)... here it is highlighted 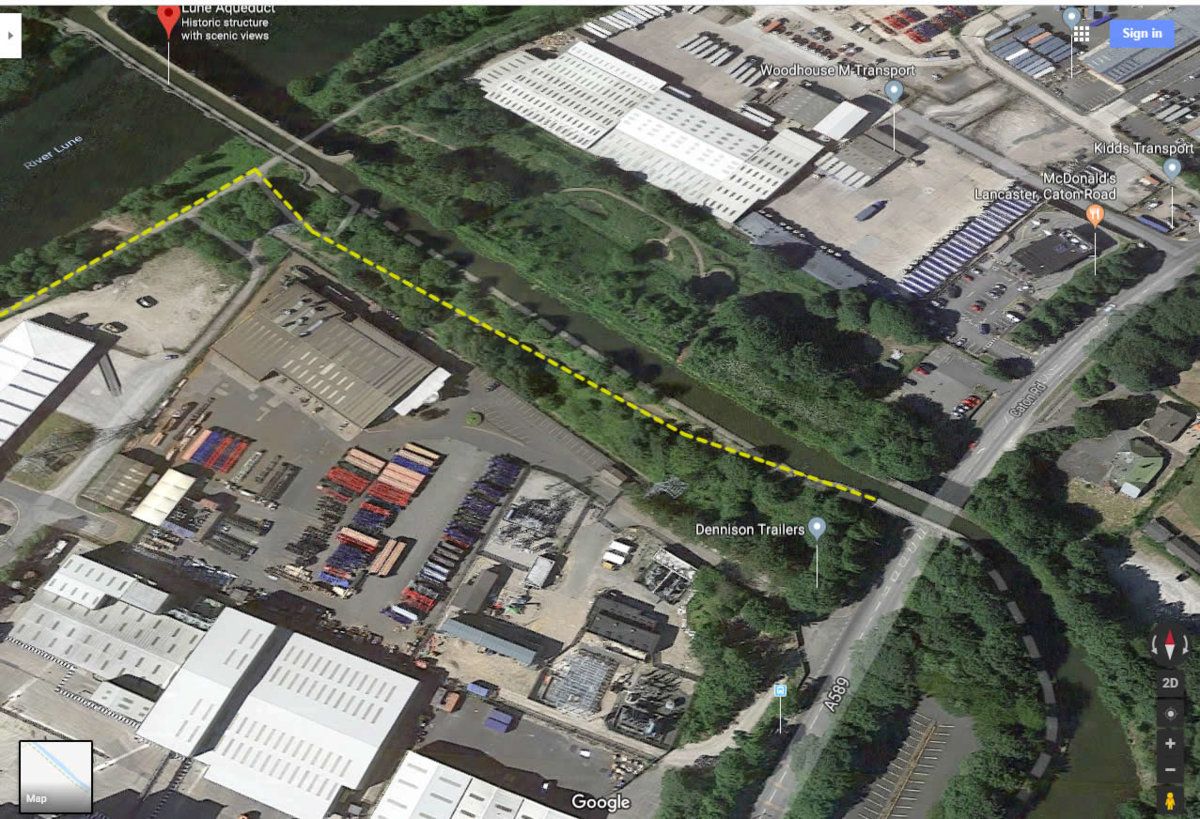 Further down the canal on your way back through Lancaster, the towpath switches sides near the White Cross Pub (it's actually on both sides between Quarry Road and Penny St bridge (A6), but I'd advise swapping sides at Quarry Road so you'll go under the A6 rather than crossing it. The two canal side pubs are heaving when the sun's out so you may have to weave your way through the punters... and the towpath after The Water Witch is quite potholed and gets really muddy after heavy rain. The towpath swaps sides again and you'll both probably need to get off to get down the little steep slope on the far side... The only other place where you might struggle is on the brow of Aldcliffe Hall Drive where you might encounter a parked car blocking the path (for a trike, not a bike). I don't think it's an official right of way for us minions so if it is blocked, all you can do is go back down and up via Aldcliffe Road and meet the wife on Aldcliffe Hall Lane. From there you'll soon be back on the Glasson path heading back to Condor Green.

jambutty53 said:
Cheers for the info - very detailed - and appreciated
just had a second look on google - never spotted that ramp at the aqueduct - right at the pylon - that helps a lot - just saw the steps missed the ramp to the right that's good
Also Aldcliffe drive shows as a route for bikes on google maps -- looks private but don't think it is -- didn't see any signs either
Thinking of going around 10 - 10-30 sunday morning maybe - if the weather forecast dos'nt change -sunny odd shower at the moment so fingers crossed after this week - if you are around say Hello - two oldies - blue trike - white shopper - the white shopper is ok on Fleetwood front so going to be a test for it and me on canals and tracks - and maybe a one off - will see
Thanks again
Click to expand...

The stretch of canal you're planning on doing is mostly tarmac and odd bits of cobble... I think it's only the bit after the Water Witch pub upto the pictured bridge that's not, which is no more than a couple of hundred yards. Enjoy your ride and let us know how you got on.

EDIT... @jambutty53 there's another section you might find tricky with the trike. The underpass that lets you safely cross the A6 has some rather tight chicanes on each side. If it's not trike friendly, follow the dashed yellow line around the pavement (shared use) and cross the road. There's a ped crossing by the entrance to Sainsbury's car park so you will get safe passage eventually.

Presuming you are coming along the quayside, the route takes you partially onto the Millennium bridge and off again... I caught a group doing the Way of the Roses getting confused on the bridge this morning
Last edited: 13 Jun 2019
OP

yes will do - thanks for your time
OP

Glad you enjoyed it @jambutty53

I had a ride out to Morecame the other day and you'll definitely get your trike through the gates at that level crossing... should you ever choose to do the Condor Green to Morecambe route.
OP

Cheers monty veda -- Thanks for that - just planned a route through them gates - but going from happy mount park - up to rushley drive - canal down to the Aqueduct - river lune - millennium bridge - back onto Morecambe - along front back to park - says 14.6 miles --1hr 15mins -- the wife wont go above 8mph so I can double that time - no rush though -- this weekend weather permitting
You must log in or register to reply here.
Similar threads