Well, that Arkwright Building was certainly 'open all hours'.

If have gone out again for a few hours and let him stew.

He'll probably get a suspended sentence.

Hope he doesn't try to sue for hurting himself.

That reminds me of this burglar who got trapped upside down, hanging by his shoelaces.
He claimed he'd seen someone breaking in and was trying to stop him... 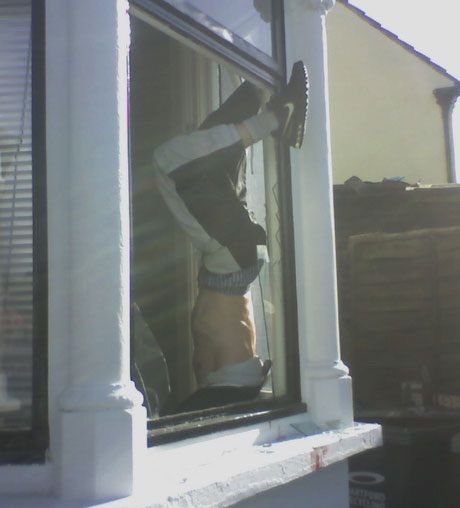 He was sentenced to three years.

What a small world. I was helping with a course surveying around that building a week ago.

This story reminds me of a famous exchange between a housebreaker and the Sheriff at Greenock Sheriff Court in the 80s..
The crook was being sentenced, and when the Sheriff told him he would have to serve 18 months in prison, the crook replied "Is that it? I'll dae that standin' oan ma heid!". To which the Sheriff immediately replied "In that case you can have another 6 months, just to get you back on your feet again".
U

I remember an even closer shave in Plymouth...


A worker went down to the cellar of the store and heard noises, so alerted manager.

They called the RSPCA thinking it was an animal ... when the wall was broken down, they found a gentleman who had been there several days

glasgowcyclist said:
That reminds me of this burglar who got trapped upside down, hanging by his shoelaces.
He claimed he'd seen someone breaking in and was trying to stop him...
View attachment 78081

He was sentenced to three years.

Whereas if he had freed himself, driven off at great speed and killed a cyclist, he would probably only been banned from driving for a year and fined £250! What a crazy world ...