Hi everyone, I'm new to this forum stuff so please bare with me. I was just hoping for some help with regards to planning a cycle trip from Italy (Liguria) to England. Are there any particular routes that people have done already? Or any suggestions? I'm leaving in mid June so have plenty of time to plan but really don't have the foggiest where to start! I have my bike but so far that's it..

Thanks but no thanks. I think I'll pass.

Hi. Can't help you with your trip, but welcome to the forum

It's always a good idea to give people some background information so they can tailor their advice, eg information about your cycling experience etc, and being more specific about where you're starting from - La Spezia is 340 kms from the French border.

I'm assuming that when you say Liguria you're planning on flying to Genova. It's not an ideal place to start, but then Milano or Torino are a bit too close to the border if you want to see much of Italy. If you have time, it might be worth considering starting from Pisa.

From Genova the options are basically to follow the coast and then climb over the mountains, and then head north. So the first thing to think about is where to turn north - there are several options. Then the next question is where to cross over the Alps into France. The most promising options are probably Mont Cenis (Moncenisio) or Montgenèvre - but there are others.

You could try my website ( http://italy-cycling-guide.info ). For example, there's this series:

You could also check out this thread:

Thanks a lot. Brilliant looks like you definitely know your stuff! Well I'm just going home, been living here for a year and have seen plenty of the country, so for me it's just a means of transport with the added pleasure of seeing some beautiful sights. I really enjoy cycling and up for the challenge too. I currently live in Imperia so I thought it may be best to head into France and then turn north, no? If there are certain routes that you would highly recommend but are a little off course I'd be happy to jump on a train to get to the starting point. My cycling experience is medium I'd say, I've competed in a few races in England across forests, but like I say I mainly do it as I enjoy the sights it brings.
A

Coco98 said:
I currently live in Imperia so I thought it may be best to head into France and then turn north, no?
Click to expand...

I'm not sure about that. If you have the time, there's definitely an interesting route to be done through the Mercantour and Ecrins national parks, but it's pretty mountainous - and, my impression is that the mountain valleys form a sort of fan shape, so going north-south you are going to be going up and down a lot. If you were planning to hook round the Alps you have to go quite a long way west. Check the Google terrain view and you'll see what I mean.

You may have decided you want to spend more time in France rather than Italy, but if you haven't, then you might want to consider the Bicitalia Svizzera-Mare route from Imperia and then either head for Cuneo, Pinerolo and then Rivoli, or going via Bra, or Alba, or Asti to Torino - and then take the Corona delle Delizie to Rivoli. From Rivoli you pick up the Ciclostrada Val di Susa which takes you to the pass at Moncenisio (or you could cross into France via Montgenèvre).

Alternatively you could go to say Nice and head north, crossing back into Italy. I think going via Isola 2000 and the Colle della Lombarda (col del la Lombarde) may be the most feasible option (the tunnel under the Col de Tende is closed to bikes and the alternative is a very scenic, but gravelly road).

I leave it to other people to comment on the route across France.

Do check out the link to Dave Davenport's article (last link in my previous post).
Last edited: 18 Jan 2015

Have a read of this book by Andrew Sykes. He cycled the old pilgrimage route from the south coast of England to Brindisi. It may not be your exact route but the routes may cross. It's well written too. 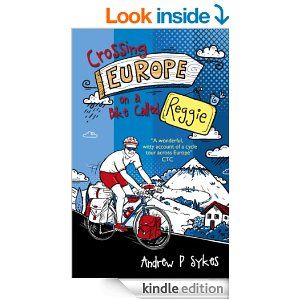 Have a look at the Eurovelo routes you may be able to use them in places.

Coco, i have a gpx route from dijon to calais. Worked out in detail (though for cycling the other way) though have not yet ridden it. If you are interested, pm me.

Have you seen this site?
http://www.crazyguyonabike.com/

It's a good place for seeing what tours other people have done in the areas you're interested in. To search by a country, choose Journals then Locales.

I definitely enjoyed Mont Cenis to get over the Alps doing Paris to Rome. It would be worth your looking at the 'Rome to Home' thread in this forum too. And where in England do you want to arrive?
A

It also gives a pretty good overview of the major valleys etc.

We did this trip last year (Genoa to UK);

Look at this post on here, you may be able to liase.

If it's scenery you're after, I think a route through Switzerland wouldn't disappoint.
You must log in or register to reply here.
Similar threads