He's not weaned yet and he swiped a chunk of chicken...
I tried to take it off him and he went absolutely mad!!
~Spitting, growling, claws out... the works!!
It was like funny but I'm actually nursing about 30 DEEP cuts and bites!!
Any suggestions on how to get him out of this habit?
I've NEVER had a viscous cat before

You got between a cat and its grub - brave. You think the cat was stealing, but the cat was just doing what comes naturally and would defend its food.

Cats are cuddly, but are also 'wild'. This has always to be borne in mind,

Trying to 'tame' a cat can ruin its personality. However, FWIW, I used to have a cat that was prone to scratching my wife and son, but not me - I simply used a firm "no" when it looked as if the claws were about to come out and they never did. Having said that I wouldn't have tried to steal its grub - ever!!
T

Tinkstheminks said:
It was like funny but I'm actually nursing about 30 DEEP cuts and bites!!
Click to expand...

did you not realise after the FIRST bite that he wasn't having any of it?

I pretty much agree with Blue, but one of my current cats (a rescue cat) is fierce and very large which means he can do lots of damage. If he gets in a mood I have to spray him with water from one of those plant sprays. With time merely brandishing the spray would stop him in his tracks. Now the very mention of the word "Squirty!" makes him stop.

Good luck with your kitten.

once he's been "to the vet" (ahem) he'll be a bit more placid, but no less playful.

Location
Where ever I lay my hat (helmet)

Aye, cats with balls are ballsy!

Though they are far more contrary and wilful than dogs, I find - if a cat doesn't like someone there's not a huge amount the person can do about it. Conversely, my girlfriend's granny had a cat called Tom that was very naughty with my girlfriend's family (it would hiss and scratch etc) but whenever we went over to stay it allowed me to pick it up, tickle its belly until its little tongue sticked out and even carry it on my shoulders like a parrot! You cannot imagine the amount of brownie points that cat's acceptance got me!

alecstilleyedye said:
there's such a cheap innuendo in there but i can't bring myself to use it

Melvil;41651][quote name= said:
there's such a cheap innuendo in there but i can't bring myself to use it

so must you be then

You've got a Hitten, not a Kitten!
Aka a Kitler.
Give him a cycling related name like....Clawed Butler. 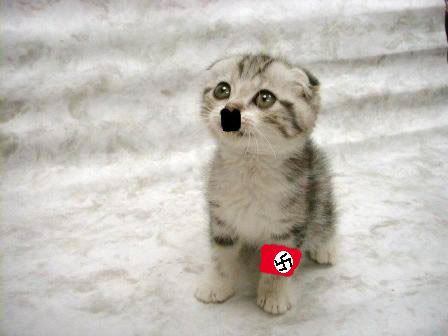 My brothers "pet" cat was a total psycho, if I stayed at his house I would sleep on the settee but never dare move for fear of attack. However, with maturity he has calmed down and is a lovely puddycat (albeit, missing a couple of "stones").
T

Now the very mention of the word "Squirty!" makes him stop.
Click to expand...

With cats try to get them to look into your eyes, then blink slowly. It's their body language for trust.

We have tamed some "wild" ones this way.
You must log in or register to reply here.

Who on here owns a Sports Jacket?