Seeing as the CTC AGM this month dragged on for so long, the original plan afterwards to ride all the way back to London had to be abandoned.

However, as the route is such a nice one, I'm thinking of having another go at this. The provisional route is shown here. It may get tweaked a bit at the London end.

It goes through some spectacular countryside, and although there are some minor hills to climb, there's some gorgeous descents. Most of the route outside of London is on B or even more minor roads, and I've already done almost all of the route once if not twice or more in places. I did happen to notice several nice pubs to stop at, for thirst quenching/eating purposes....

The start point will be Loughborough station at 10.15, and conveniently, trains from London St Pancras can be obtained for £15 standard class or (currently) the same price for First class, which take about 1hr 20 mins. For bail out points if required, the route is fairly close to 2 separate mainline rail routes. I'd reckon on getting back to St Pancras around 8 pm.

I'm suggesting doing this on Saturday 3rd July, but can move it, although for most of the rest of July and August, they've got a lot of work on the trians between Leicester & Loughborough, so finding an alternative date might be tricky. It'll be good training for Dunwich - although it'll be in daylight.

Body willing, I'll come out to play Adam.
Luffbra is the poxiest place that I have had the pleasure of visiting several times in the recent past unfortunately - it will be satisfying to cycle away from it. Even the sky leaks in Luff.

As I've already posted on the other place, I fancy this. Bit of an early start needed (5.30am train to make the start in time) but I think it would be worth it, one heck of a day out!

Officially, the trains have 2 bookable bike spaces in a small compartment usually at the rear of the train. However you can fit at least 5 bikes in there (as seen the other week). So if you want to reserve a bike space, do it early. Please note the East Midlands web site won't let you do this on-line, so buy your tickets via another provider such as Southern or National Express East Anglia, which does let you reserve a bike space on-line, once you've reserved a seat. As mentioned above, currently First Class tickets can be had for the same price as Cattle Fare.

A slight complication I ought to mention is that Loughborough has a short platform, and if the bikes are at the rear, you have to manoeuvre them up the aisle into the next carriage, as the doors on the last carriage remain locked.

They do give an announcement stating this as you arrive at Loughborough, to remind you, but it's probably best to make your way leisurely back to the bike compartment once the train pulls out of the previous stop at Leicester, as then it's 9 minutes to Loughborough.

Time for the newspapers and a spot of coffee...

Yes, another perk if you go First Class, is that you can get a free tea or coffee from the buffet car.

Adam, I have bought a ticket on the Southern site. Were do I book a bike reservation? Can't see how.

I'm interested, I was thinking of riding the whole way down to London this summer, just getting fed up with solo rides so Loughborough to London with a group sounds good.
OP

ianrauk said:
Adam, I have bought a ticket on the Southern site. Were do I book a bike reservation? Can't see how.
Click to expand...

At the point when you've selected the fare and time, and then clicked on the buy now button, the new screen which came up had the journey details in the top half, and then there was a section about Seating Preferences, and at the end of that there was a little arrow and bicycle space. If you'd clicked on that, then it expands to let you select a bike space. 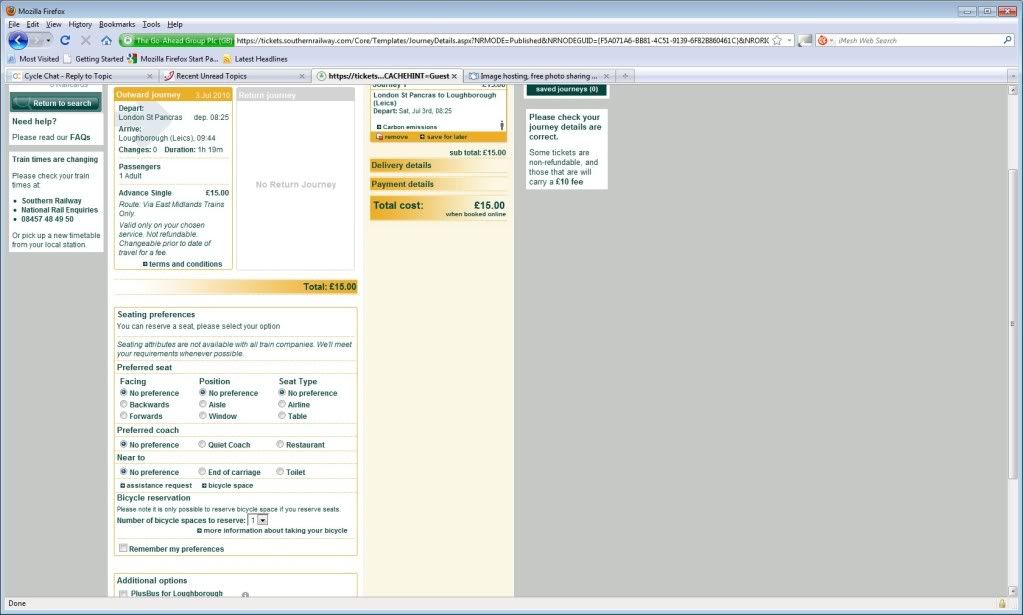 However, as you've already bought your ticket, you can ring East Midlands trains to reserve a space (assuming they haven't gone) on 08457 125 678 - select option 5 followed by option 3.

Just spent over an hour on various phonlines with none having a clue how to give me a bike reservation. In the end they say I can just turn up and go as it's outside peak.

ianrauk said:
Just spent over an hour on various phonlines with none having a clue how to give me a bike reservation. In the end they say I can just turn up and go as it's outside peak.
Click to expand...

I had the same today for the Cleethorpes ride - friggin' annoying isn't it?

Just got my ticket (in typical fashion, it's cheapest for me to get a single from London to Loughborough & return from Pompey to London). Went for the 1st advance fare. For some reason, all the cycle spaces had gone already

Will your Viner be back in action for the ride Stu?
You must log in or register to reply here.
Similar threads