My pride and joy. I've since upgraded to 10 speed ultegra but the wheels are off getting rebuilt at the mo so new pic still to come with the new groupset. 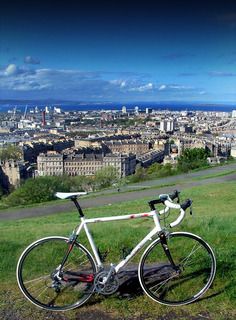 Location
On the doorstep to the Southdowns

Mmmm nice bike good picture as well, surprised there is no camera shake, or did you drive to the top of the hill and get the bike out of the boot of the car??

My husband has a Kinesis Racelight T made up into a tourer and it is a lovely steed. Offspring's cyclocross bike is a Crosslight Pro3 frame. Very good framesets
OP
OP

WindyRob said:
Mmmm nice bike good picture as well, surprised there is no camera shake, or did you drive to the top of the hill and get the bike out of the boot of the car??

Nope, I don't drive, so I'm proud to say I got up there under my own steam.

The climb up is from the other side of the hill which isn't as high but it is short and steep. A nice wee climb to end a ride on just for the view.


wafflycat said:
My husband has a Kinesis Racelight T made up into a tourer and it is a lovely steed. Offspring's cyclocross bike is a Crosslight Pro3 frame. Very good framesets
Click to expand...

Very good framesets indeed. Mine is lighter, stiffer, cheaper and more comfortable than the full carbon frame it replaces. I love it to bits. It's the only bike I've owned that I felt deserved a name. Her name is Lisa Aviette.

I had a couple of problems with the frame initially but the guys at both Chain Reaction (where I bought it) and Upgrade (the designers and distributors of Kinesis) were fantastic in getting it sorted. I can't recommend either of them highly enough especially the guys at Upgrade bikes whose customer service is second to none.

I very nearly bought a KiC 2 in white as a spare summer steed and then I didn't. Looks very nice! Can you tell me the problems you were having with the frame that Chain Reaction and Upgrade helped you with? And what weight is it as it stands?
OP
OP

First was when the slightly raised piece of carbon around the rear brake mounting broke away from the stays, most likely caused by me unknowingly using a bolt 1 or 2 mm too long for the job, and second was the development of a small, purely cosmetic, hairline crack in the paint where the rear stays are shot into the BB. However, both times the frame was replaced in double quick time without question and I've had no problems since.

Weight wise, well, I've lost close to a pound by replacing the 9spd Tiagra with 10spd Ultegra bringing it down to just under 17.5lb. I could probably lose almost another pound off that with a better wheelset.

Thanks kyuss that's most helpful man, have fun with it!

Hi
What was the problem with your Racelight because i am currently experiencing problems around the bottom bracket area. i ahve had three new bottom brackets put in recently but none have fixed the problem.
Thanks
OP
OP

Never had any problems with the bottom bracket as such. There was a tiny hairline crack in the paint at the point the carbon stays were shot into the BB shell. Purely cosmetic and didn't effect performance in any way, but got it swapped anyway.

What's the problem you're having?
M

Hi forum goers, nice to hear all this Racelight chat

If any of you are interested I run a Kinesis Racelight owners / fan group on facebook. Anyone is welcome to join - please do so as I need to bump the interest up. You can view pics of my KiC2 and are welcome to post pics of your own.

Heres to hoping that this post may drum up somemore interest.

I would also welcome any bad points any of you have had regarding this brand. I have the full support of Dom Mason from Kinesis UK, I am sure he would like to know what we all actually feel about his product, I for one think the KiC2 is an awesome piiece of kit