A very helpful Jay flew past and perched maybe 50 - 70 ft away in the local country park (lcp ?

)
Despite the 200mm lens, still had to crop the image to bring it forward. Only a snapshot really, but very pleasing because i've rarely seen this bird.

nice - the Jay is a beautiful bird...well depicted in a wintry setting here 10/10

Get jays in my garden every day. The come to feast on the nuts I put out. The prettiest bird I get is the occasional visit from a kingfisher, flying up and down the stream at the end of the garden. Had a couple of mandarin ducks in the garden for a short time. One year Mrs Mallard and her brood of ten would actually walk up to the back door, whereupon Mrs Mallard would tap on the door with her bill... Then there's the woodpeckers. Currently I have a semi-tame pheasant (female) who will run towards me (stopping about a couple of metres away) as I throw nuts & raisins out for her to feast on. A robin will sneak in and take dried catfood from the cats' bowls. 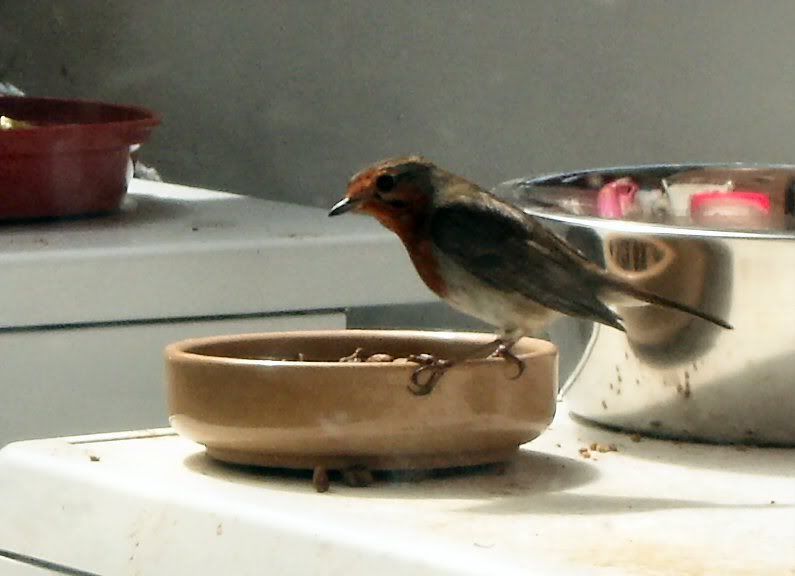 Then there's a jackdaw that occasionally gets in the house.


According to the local wildlife, I have a large neon sign above my head which says "soft touch for food"

The robin is thinking '...hmmm how do I get the cat to like mealworms and other wriggly things...'

Oh that robin has already got the mere human to feed it mealworms! I tell you, they have me sussed.

Location
Outside The Little Nibble

I got a new camera.

Trouble, is the memory card with it was so small there was no space for any photos.

Need to get a new one when back at work.
OP
OP

BJB said:
I've never seen one. They don't seem to be any round here. Thanks.
Click to expand...

If its any consolation, ive rarely seen them although they are quite common. Shy birds, ..living in parkland or woodland, they're smaller than a pigeon, bigger than a blackbird. If you have woodland, theyre probably around.

If you see one Jay, look around and you'll probably see another. They usually scoot aboot in pairs.
You must log in or register to reply here.

I need a new hobby.