This summer I'm planning a trip up through Europe, and the last leg will be going along the North Sea Route in Norway, from Kristiansand to Bergen. Here's a picture of the planned route: 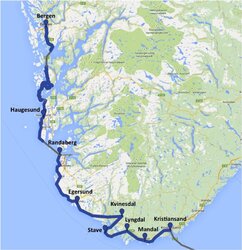 ​
I just had a few questions for people who have done parts of this route:

1 Are there any important/dangerous things I should be careful about in these parts of Norway?
For example, weather: like the Mistral in France, or the heat in central Spain or dangerous wildlife? I really don't know much about Norway, but am super excited to see some of it! Just want to make sure we survive.

2. Are there good bike paths along the route? And is Norway generally considered bike-friendly?
I assume there are decent biking roads, as this is a pretty well known route, but wanted to check. Again, I don't know much about Norway, are drivers usually considerate of bikers there?

3. Are there many campgrounds around? And is wild camping acceptable there?
I have the West Castor North Sea Route 2 maps which show some campgrounds, but not that many. Do you have any particular resources you have used to find campsites before?

4. It sounds like the ferry from Stavanger to Skudeneshavn has stopped operating, is there a good alternative for cyclists?
It looks like there's a road onto one of the islands near Stavanger which then leads to a ferry going towards Bokn, but it looks like a major road that wouldn't be bike-friendly. If anyone has done this part of the route recently, how did you get across?

5. Are there places to get relatively cheap food in Norway?
I've heard that it's a fairly expensive country, so I was wondering what tips you had for eating cheap there?

6. Any advice on the route?
I can't really change the areas we'll be biking, but if there are specific places somewhat along the way that you have found that are particularly spectacular or interesting in some way (unique culture or scenery for ex.), I would love to hear about them!

Thanks for any and all help you can give!

I've not done that part of the route, so can't answer most of your specifics. However, Norway is a very cycling-friendly country, and I can't think of any dangers you need to know about. It is an extremely expensive country.

It's about 10 years since I cycled that route, so no info on current situation, but there were no particular hazards or problems.
The tunnels were not pleasant to cycle through but not of any great length.
Wild camping allowed but there were camp sites.
Food, and eating out is expensive when compared with UK prices.
It rains a lot in Bergen and on the west coast n general.
No problems with bikes on ferries.

Just go and enjoy it.

Norway is fantastic for cycling in and wild camping is not only allowed, it is happily allowed under the everyman's law. You are technically meant to be at least 50m from someone's house and not visible from the road but Norway is very relaxed about where you can wild camp and we have camped in the very far north of Norway where we were not only visible from the road but almost on it! The only result of this was that someone came to talk to us and ask us about our journey... he came back some hours later with about 1/2 - 1kg of cloud berries for us which he had just picked, taken home washed over and cleaned and driven back to us to give them to us.

It is however a very expensive country to be in, so aim to camp wild as often as possible and only visit campsites when you want to shower - learn to keep clean in other ways, it is cheaper!

I dont like putting dampers on People's trips but as mentioned Norway is hugely expensive. It is the only country I have been to where they sell cucumbers in quarters as it is so expensive.

The weather can be very variable even in summer and so take your waterproofs.

If you go into Plotaroute. Com and click on Plot a route now and choose World Map. Zoom into the area you want to look at. Up in the top right hand corner you will see Maps, Satellite and paths. Click on paths and it will show cycle routes in that area.

I use Plotaroute for all my planning and it is simple to download them to Garmin devices. You can also use Streetview within Plotaroute.
Last edited: 4 Mar 2015

Bread, drinking yoghurt and the occasional eat as much as you want included Norwegian Hostel breakfast can get you by on the the relative cheap.

albion said:
Bread, drinking yoghurt and the occasional eat as much as you want included Norwegian Hostel breakfast can get you by on the the relative cheap.
Click to expand...

plus stocking up on basic supplies like coffee, porridge oats and staples such as sugar in Denmark! 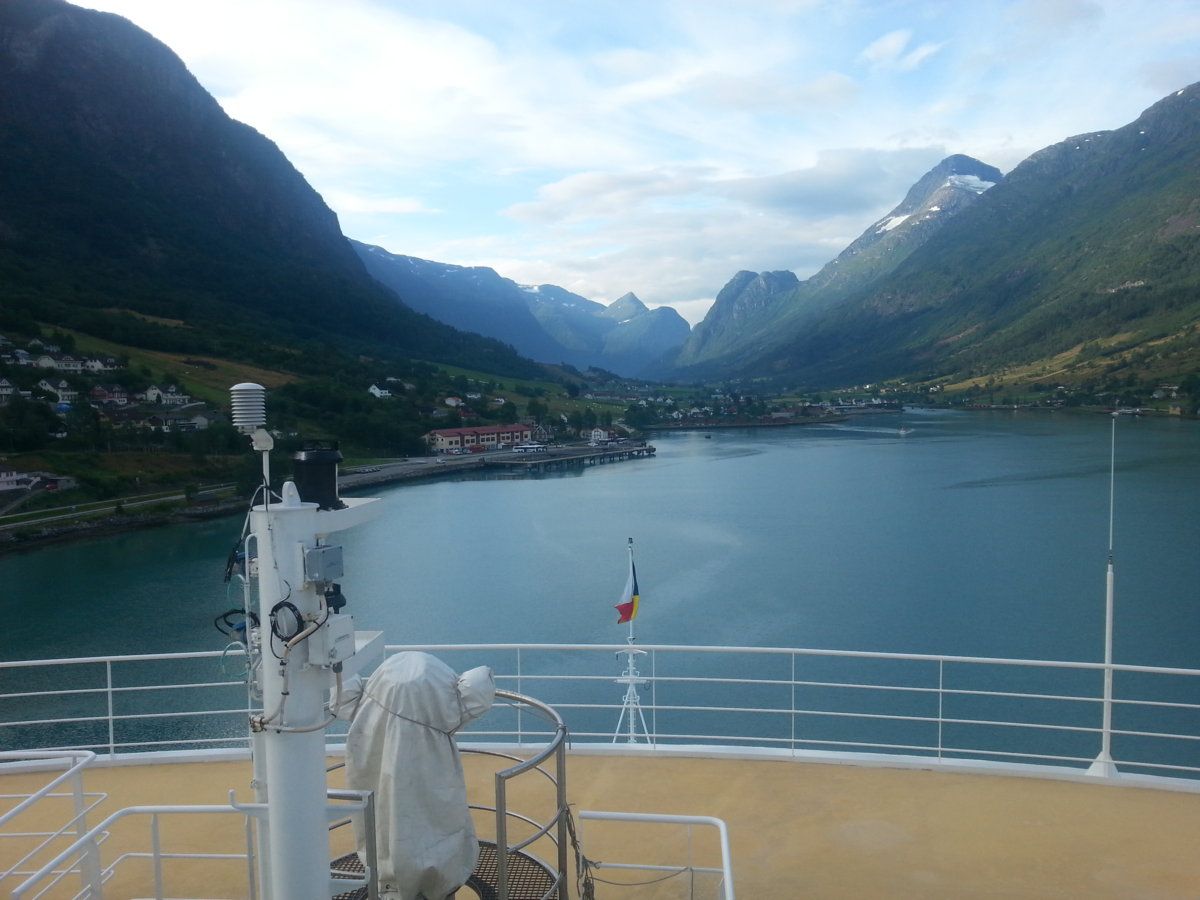 i was in Norway last year in July, Stavanger was 28 0c and bright sunshine, next day was Olden, cloudy but warm, Skjolden was very cold, and Bergen absolutely poured down..... so be prepared for everything.

An amazing country, but very expensive.

luckily we on a ship.

Thanks for all the replies!

Great about the wild camping and bike-friendliness, too bad about the weather and price of food, hopefully it's not too much of a downpour when we're there.

So no one around here has done this route in the last couple years? I guess in the worst case, since it's a bike-friendly country, there are presumably local cyclists I could ask in Stavanger about the ferry. It would just be nice to hear some firsthand experience before we get there.

Anyway, thanks so much for all the tips already!

I did the Danish section around 5 summers ago. the English, dutch and german sections 4 summers ago. We followed in faithfully until Germany where we fell out with it and freelanced. we fell out with it because we got fed up of doing 3 sides of a rectangle when we could have just done 1.... I have cycled Norway extensively, but only much further north. you won't have any issues though. it was only the german motorhome drivers that ever cut you up and never gave you enough room - never worked out why but in the 3 months we were there, it was routinely the german motorhome drivers that were the issue.

Can I suggest you have a read of the website...they have revised it considerably - not sure I like the revision but if the data is still there http://www.northsea-cycle.com/ you use the blue sysmbols down the middle to navigate... there used to a be a discussion area which was good to read, but random... I think it is now the I did it... also very useful but their site does not allow me to link you to it directly sadly.

I'm in Stavanger just now. I'll nip in to the Tourist Information Office in the morning and ask about the ferry to Skudeneshavn, and the suitability of the E39 for cycling if you need to reach the Mortavika - Arsvagen ferry.

I asked at the Tourist Office in central Stavanger about ferries and was directed to www.norled.no. It doesn't seem to be the easiest site to navigate but this map appears to indicate that there is still a route from Merjarvik to Skudeneshamn via the island of Kvitsoy. There doesn't appear to be a timetable for it though. Maybe an email to post@norled.no will give a definitive answer.

The road (E39) from Merjarvik to the island of Rennesoy for the Mortavika - Arsvagen ferry is actually a tunnel most of the way so doesn't sound like too much fun.

I have to say that the lady in the tourist office didn't seem to know much; but she did give me a small booklet/cycling map dated 2011 which you're welcome to have if you'd care to give me an address (you can do it through the "start a conversation" thing on the information tab of my profile.

The website www.cycletourer.co.uk/maps/tunnelmap.shtml is excellent for knowing which tunnels you can and cannot cycle through in Norway. Around Stavanger most but not all of the tunnels seem to be prohibited to cyclists but the person who had provided this data has not, in most cases, given any alternative. Most lie on the E39 as well which is not good news.

This site http://userweb.eftel.com/~wheelbuddies/norway/norway2007/n2007tunnels2.htm only lists banned tunnels bit it does have a good amount of information on alternative available. It is however not in the most useful format, as you will see. F3 or your equivalent find function will be quite useful.

These are the 2 best 'tunnels banned to cyclists' websites that we found useful whilst we were in Norway. Hope they help.
M

1 Are there any important/dangerous things I should be careful about in these parts of Norway?
No

2. Are there good bike paths along the route? And is Norway generally considered bike-friendly?
Yes. Follow the North Sea Coastal bikerouts

3. Are there many campgrounds around? And is wild camping acceptable there?
Yes, they open for the summer season. Wild camping is permitted but usable sites are hard to find in the tamer parts of Norway.

4. It sounds like the ferry from Stavanger to Skudeneshavn has stopped operating, is there a good alternative for cyclists?
??

5. Are there places to get relatively cheap food in Norway?
Smoked mackeral is good value.
Supermarkets do hot burgers
Thursday is free food sample day.
If you camp cheap and cook, it isn't as expensive as people say.

6. Any advice on the route?
Kvitzoy was good but check the ferry connection. Excellent little free campsite and local fish.
OP
OP

F70100: Thanks again for all your help! I really appreciate it! And thanks for the offer for the booklet, but I'll probably just go get one myself when I'm in Stavanger.
SatNavSaysStraightOn: Thanks for the tips, the tunnel websites seems particularly useful! Although that second link doesn't seem to work for me?
MichaelW2: Thanks for the advice! Especially the food tips!

Again, thanks so much to everyone for all your help! I can't believe how helpful the cycling community is! I just hope I can return the favour someday!
You must log in or register to reply here.