14th October - Orkney to Syre
I caught an early ferry from Sanday to Mainland Orkney and had six hours in which to cross the small Island and catch the next Ferry to Scrabster. 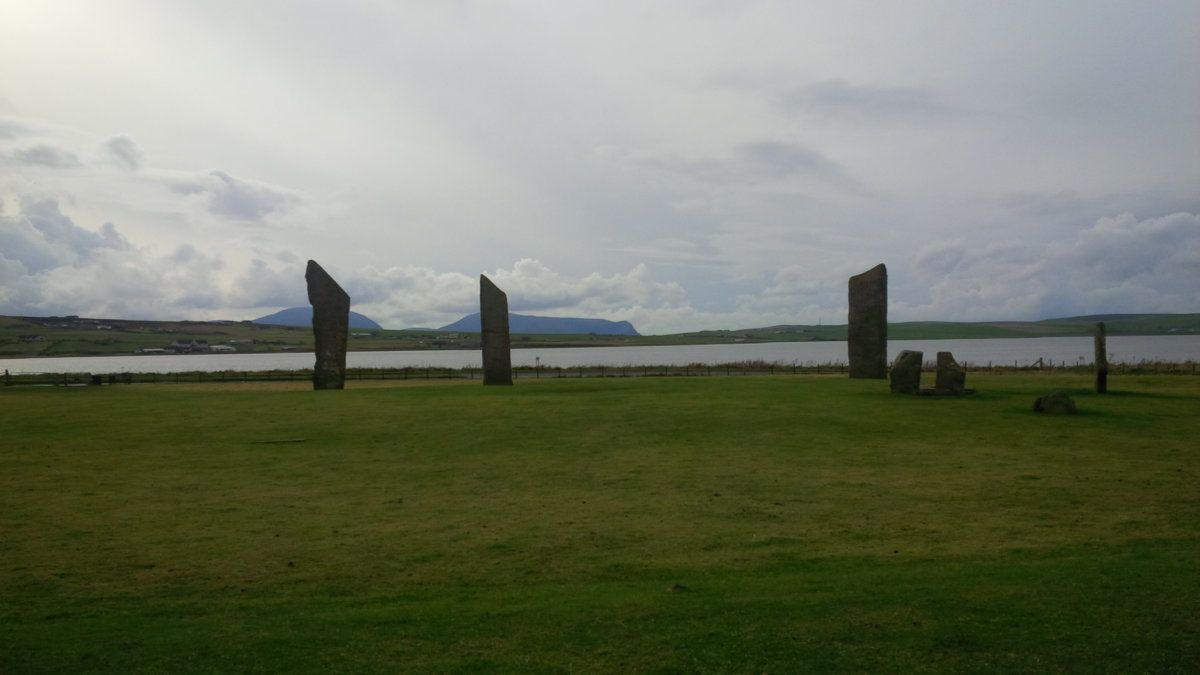 I bumped into a chap in Kirkwall who had been touring Shetland for ten weeks on a Surly Ogre with Saunders tent. He told me, "the good thing about your bike is that if someone nicks it you won't really mind". The Cheek!

The ferry arrived in Scrabster at 6pm and I headed for Betty hill beach, where I had accidentally left my tent pegs. To my relief they were still there next to where I had packed my bike the week before. I headed down the Strathnaver trail in the dark but camped up early near Syre so as not to miss the views for a second time. It was a starry night so I didn't bother with the tent.

15th Syre to Daviot
I woke up at 5.30 as it was just beginning to get light and followed the river Naver south. Thick fog hung over the river, the sky was an intense blue colour and the moon was still visible. It was cold enough to warrant using my thick padded Gore-tex gloves and five layers of clothing. Rounding a corner I startled a deer which failed it's jump over an eight foot fence, nearly snagging itself. This was the most scenic episode of my journey, here are some pics of Loch Naver taken at 6.30 and 7am 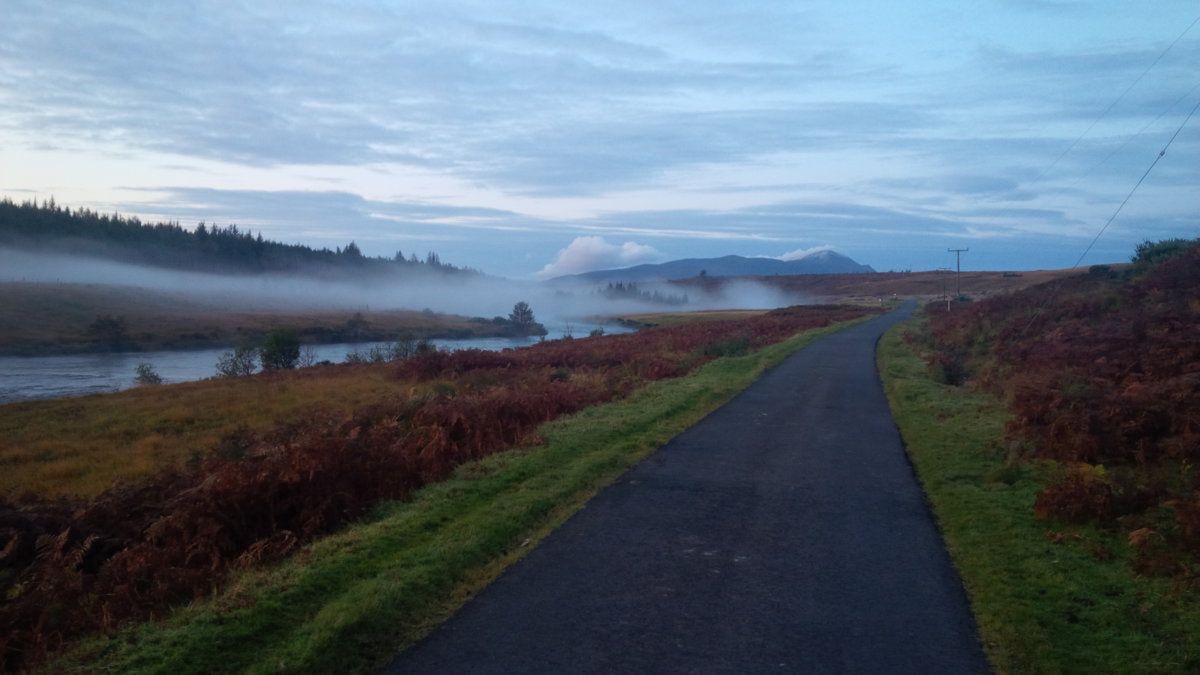 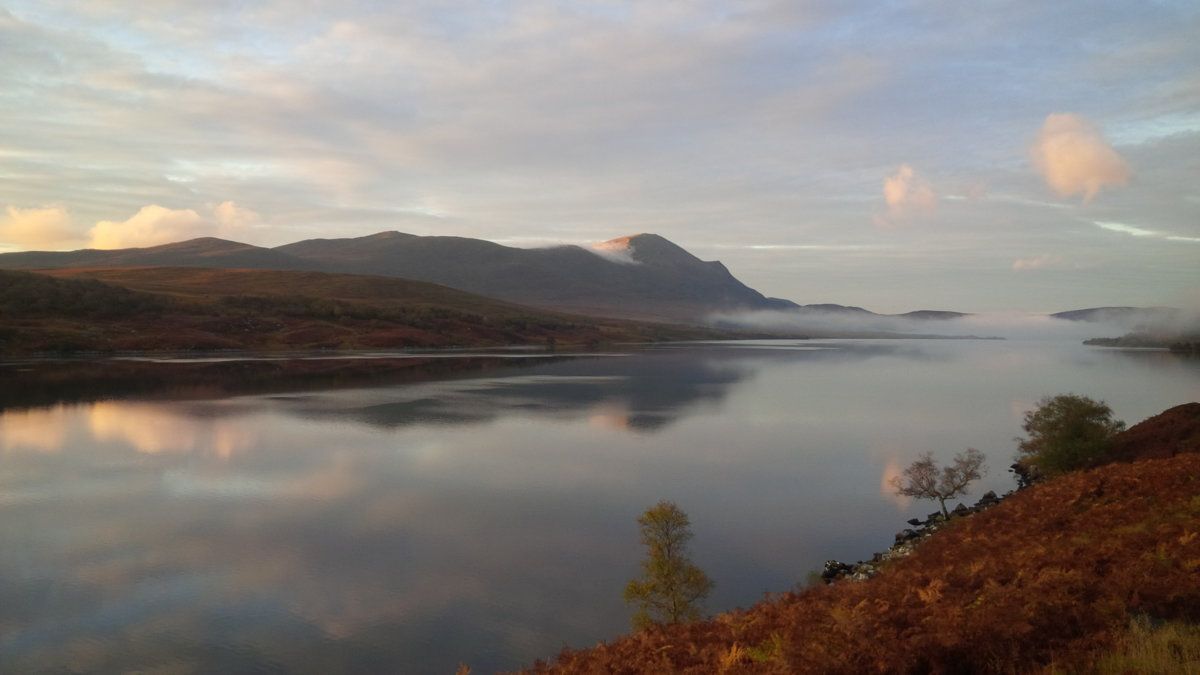 Sutherland was soon over, it's a lovely part of the world to cycle through, miles of wilderness and extremely quiet at this time of year. I had a long days riding on sustrans 1 and 7, and camped up 10 miles south of Inverness in some woods near Daviot. 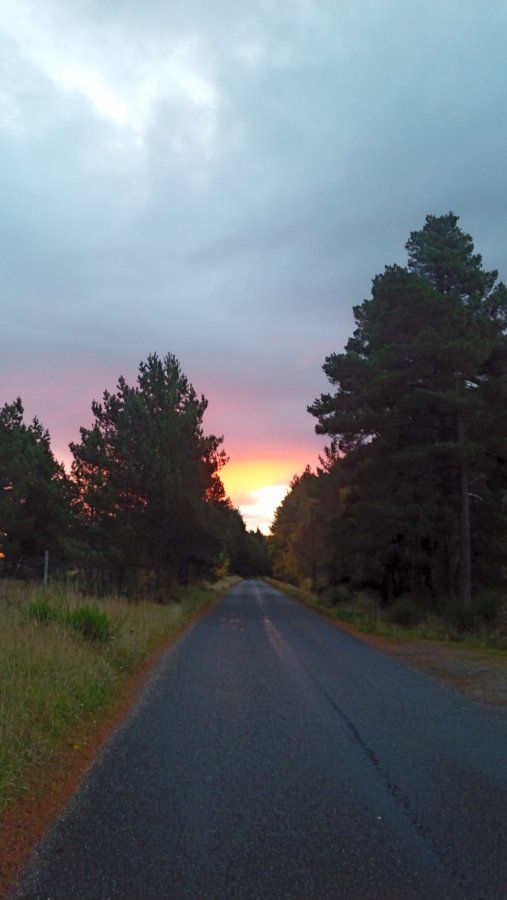 and a long days ride over the Cairngorms. The sun came out and I went a bit wild, riding fast all afternoon from Dalwhinnie past Blair Atholl, stopped at the chippy in Pitlochry and carried on all the way Past Perth and on to Bridge of Earn where I found a good spot to camp in some woods near the castle.

17th Bridge of Earn to Edinburgh
I'm paying for my recklessness, every hill is a struggle and the front hub is sounding graunchy. I very slowly make my way to Edinburgh and find a bike shop where I get the bearings changed and check in at the youth hostel, where I'm kept awake for most of the night by a large party of french teenagers. Before sleeping I decide to dump some kit. I sling the old Vaude panniers, which are letting in water and dump a few other bits, including a steel pan and some clothes.

18th Edinburgh to Gretna
Cycling through Lanarkshire, still tired and a little bit grouchy. The skies clear and I pass a field where thousands of wild geese are flocking before migrating. As I approach Gretna I'm sad to be leaving Scotland behind. I carry on for a few miles and camp up at my old camping spot in Rockcliffe. It's a perfect spot and I sleep for a good nine hours. 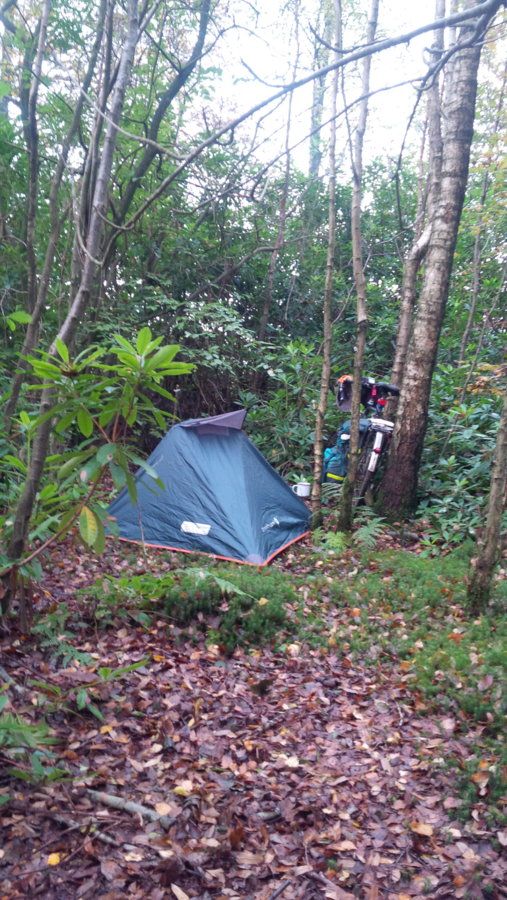 19th Rockcliffe to Preston
I've been lucky with the weather this time and I'm also seeing all the bits that I missed travelling north. The plan is to hit all of my old camping spots along the return journey and save energy looking for suitable places to camp. Unfortunately Vumbria has some technical riding and during a quick gear change I get my chain caught between the cassette and the stays. No need to worry about my paintwork, which is tatty, I backpedal and tug at the chain, which snaps a minute later. I make a right fudge of things, up om the crest of a hill as dark approaches. It's only the easy link that has come apart but I drop one half and spend ten minutes combing through the long grass until I find it. My priority now is to get to Kirby and stock up on enough food to camp out.
After possibly the best chips ever, I head off, ride through Lancashire and on to Preston where I momentarily lose control of the bike. Riding with front panniers on the rear rack is exerting lots of leverage on the front end of the bike, making it an unruly beast, particularly during slow maneuvers. My ankle takes a massive whack from my heavy V8 pedal and all I can do about it is carry on riding in the dark, groaning. I carry on past Preston by a few miles I find some woods to camp near Galgate.

20th - Galgate to Stourbridge
I wake up at 1.30 am, wide awake so why wait? I have food and the night riding is fun but the morning gets colder and colder until I'm plodding through suburbia at 8am and starting to fade. It's Sunday and the roadies are out in force. I finish slurping down a 4000 calorie breakfast and struggle on in a lacklustre fashion, watching them whiz bye with slight envy. The midlands are fairly easy on the legs and I enjoy riding through Chestershire. Loads of roadies cycling around near Nantwich, the roads are wide and quiet, the hills rolling and there's every opportunity to get out the saddle or down on the drops. I ride slowly on all day and arrive at Stourbridge at nightfall, looking so pretty, the perfect town with its brick buildings and sash windows. I'm not finding anywhere to sleep though and in the end pitch up in a field. When I wake up I can hear dogs barking and I'm only 30 meters from a house.

21st - Stourbridge to Swindon
On to Worcester and then the Cotswolds, which seemed like a doddle on the journey north but are now causing my legs considerable pain. It's a joy to arrive back in Wiltshire, and it's slow going all the way back.

The last half mile! 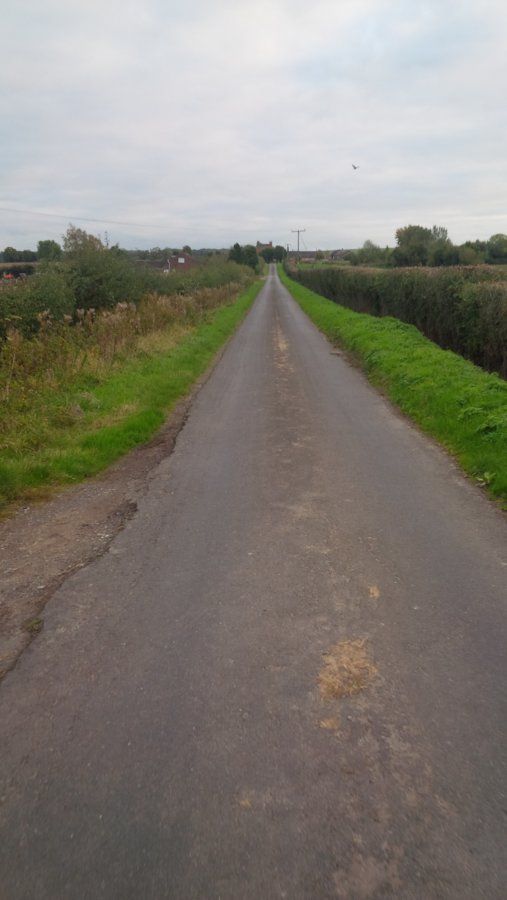 And I arrive at 5.30
My return from Scrabster, just shy of a week, despite having shed around six kilos. The weather has been fair but the journey has a weary one due to tired legs!
Last edited: 25 Oct 2019

Fantastic!
Are there more pictures? 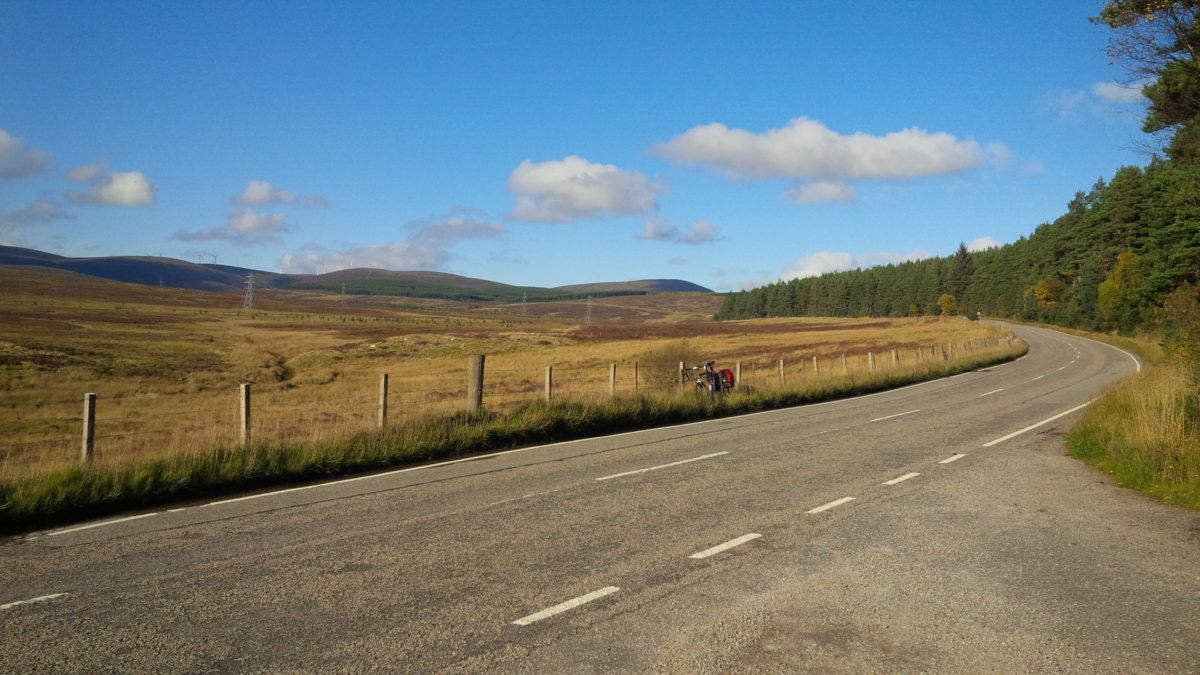 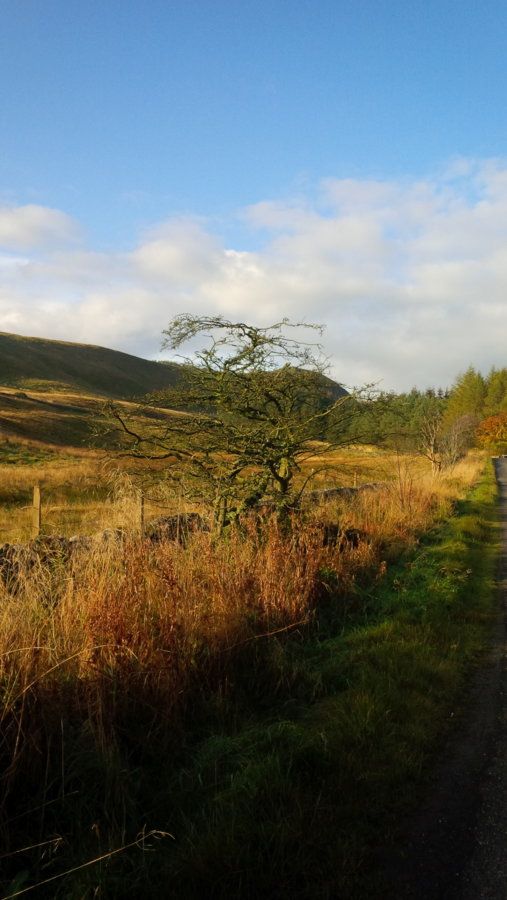 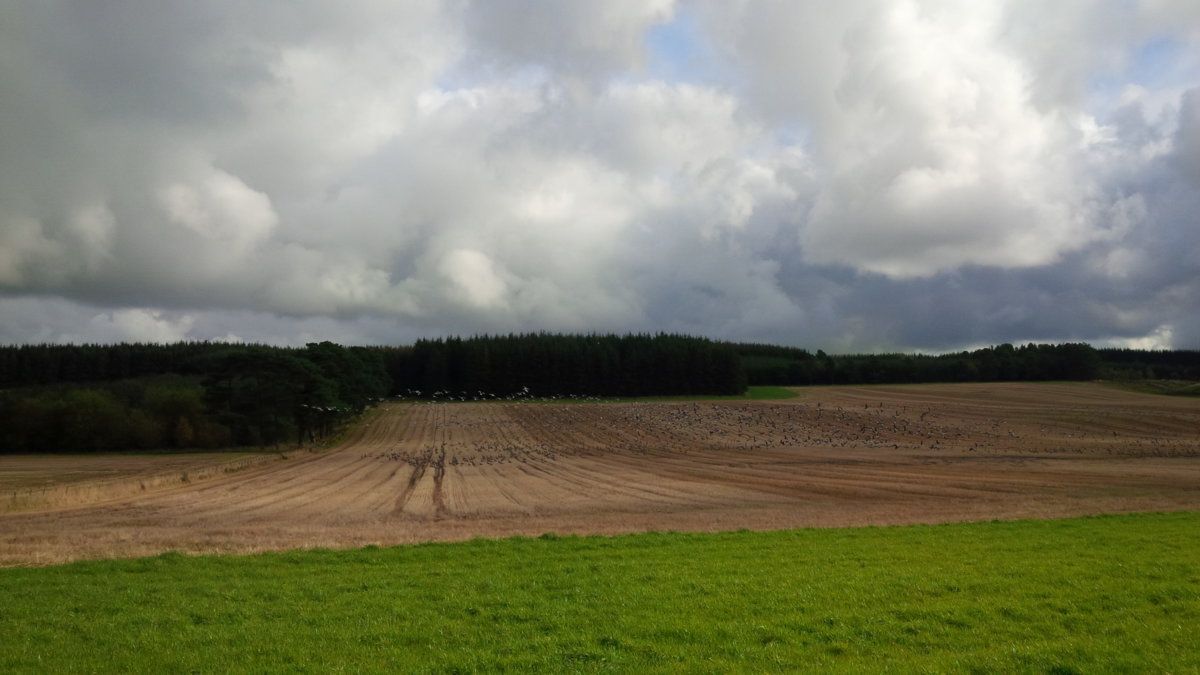 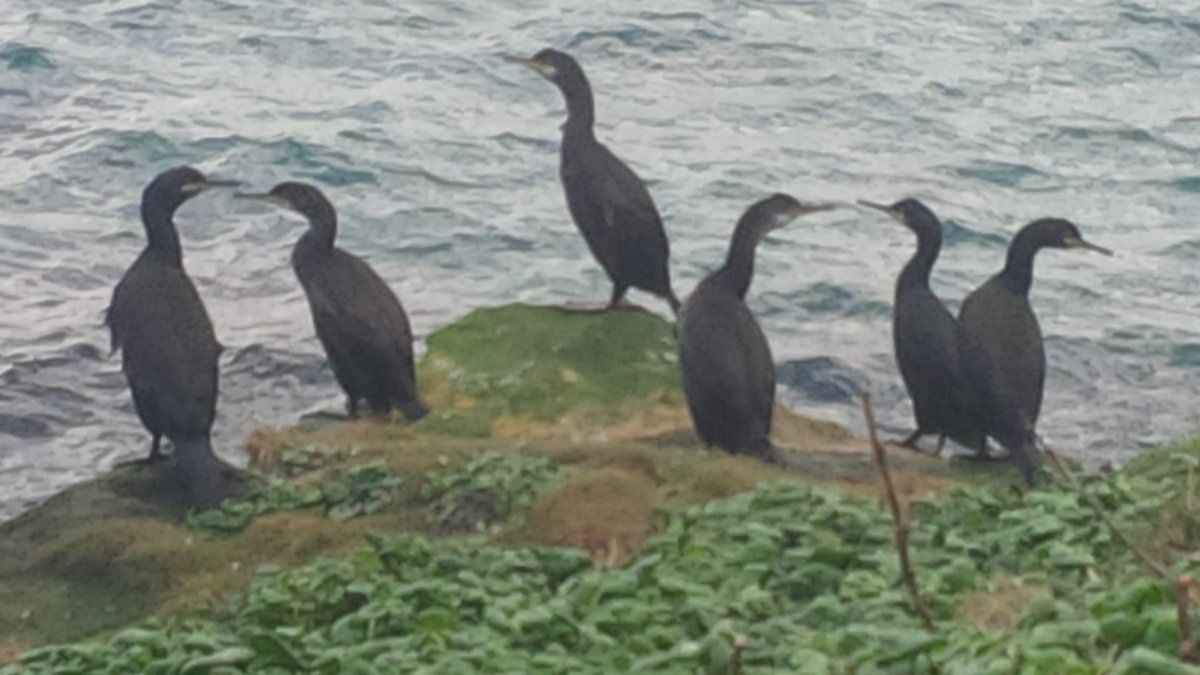 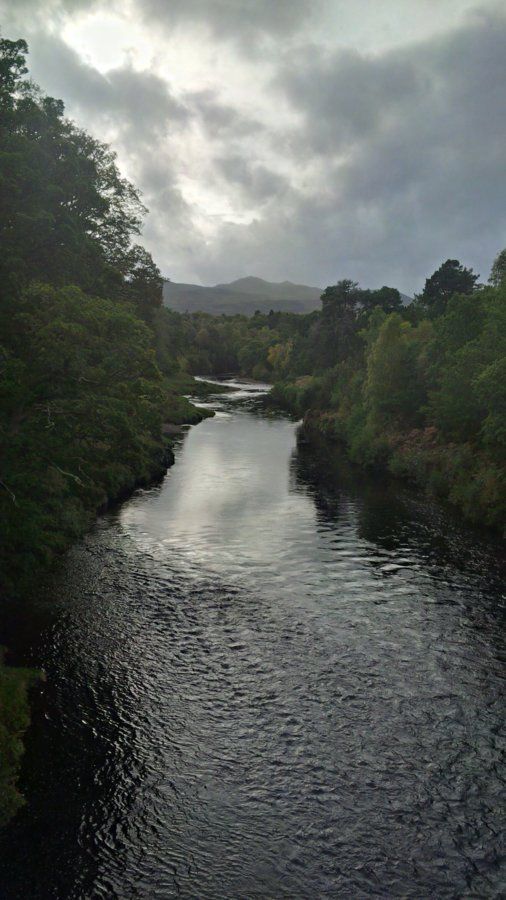 Must be hard to motivate yourself to cycle back to Swindon from anywhere!

What a trip. Thanks for writing it up.

I’ve never been brave enough or even had the desire to do a wild camping trip, but I do enjoy reading about them and I am in awe of folks that do them.

I am intrigued to know what folks do about personal hygiene and toilet arrangements on adventures like this?

Loved reading it, was a little envious and then I thought October. No way, you’re harder than me.
if you’re passing my way again, Beattock of no services, then stop at the Lockerbie Lorry park. Great food and a shop to fill your larder too.
You must log in or register to reply here.
Share:
Facebook Twitter Reddit Pinterest Tumblr WhatsApp Email Link
Top Bottom