Really horrible BSO's - why do people buy them?

The other night at work I chanced upon a 26" "Dunlop" full-sus MTB abandoned against some gates I needed to drive through in the van, so I got out to shift it. First thing that hit me was the weight, and as a fan of old steel bikes I'm no snowflake who expects bikes to be so light they levitate by themselves. But this thing felt like it had had it's frame filled with lead, it was HEAVY - must have been well into the-40's pounds range. Not even a big frame size either. 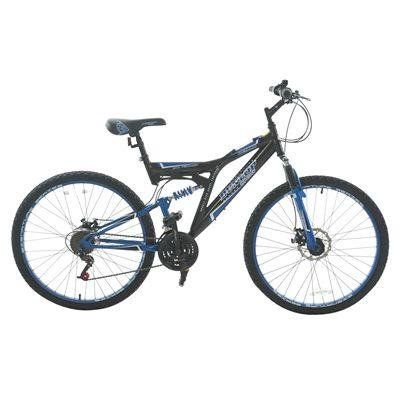 Squeezed front disc brake and lever hit bar with no brake action. Back brake barely worked. O/S pedal had disintegrated and was hanging loosely on spindle. Not a pristine example. Should have known what to expect, but no, I just had to have a ride on it didn't I? So I get on and set off down the road. After a hundred yards I'm beginning to realise it wasn't such a good idea; bounce, bounce, clank, wobble from back end, unpleasant bobbing motion from forks, and the thing felt like I was trying to ride it through treacle it was such hard work. Turned round ASAP and back to work. Did a quick appraisal of what bits would fit my old rigids and decided it was a spare parts donor, not a bike to ride. The gear bits on it aren't even budget Shimano, the rear mech is branded Dunlop and the front one just says "power" Saddle OK & wheels look to be useable quality items, once the discs were taken off and binned, as they will fit in a rim braked MTB frame. I've ridden plenty of cheap bikes, and outright junk bikes, but this BSO set a new low standard for me. I'm really trying to understand how anyone can actually BUY one of these things using actual money they've had to earn.

It was there for the taking and even free gratis I didn't want it to ride on! My old skip-rescued Apollo is like a Rolls Royce compared to this Dunlop BSO junk.
Last edited: 14 Aug 2018

Yep, there's a market for very cheap bikes for people who know absolutely nothing about bikes.

Sorry, not sure what your point is ?

SkipdiverJohn said:
wheels look to be useable quality items, once the discs were taken off and binned, as they will fit in a rim braked MTB frame
Click to expand...

the wheels may not be suitable for your rim braked mtb, you may find no braking surface on the rims if they are disc braked
M

For £99.00, less is more. Some of the very basic non-sus discount bikes are rideable, at least far more ridable than a wannabe full sus made with steel tubes that wannabe aluminium.
OP
S

I get that not everyone wants to or cannot afford to spend serious money on bikes - but you can buy cheapo rigid MTB's and hybrids that won't pitch and bounce all over the road for around the £100 mark. These things are just all show and no go, more weight, more bits to wear out - and truly horrible to ride.

As for the rims, the profile looks exactly the same as any of my other 26" MTB wheels. They are a garish blue colour with rim decals, but they should work OK, and they will only get used for low-speed local hack use.

I remember my mum got 2 bikes of some shyte buy TV program.
She was delighted at only paying £75 each for them.

I took one look at these things and thought ohh well they won't hurt themselves on these as they won't ride them.
They got thrown away a year later after sitting in the garden, mostly plastic and some kind of metal..

Skip driver why salvage that??
It will be crap from the tyres up.
Even the dust caps will be poor fitting

I suppose that's where the don't know better bit comes in - buy a full suspension mtb with disc brakes because it seems like a lot of bike for the money, when you could save your money and buy something simpler but cheaper. Or they got the wrong side of a clever salesman ...

Alan O said:
Yep, there's a market for very cheap bikes for people who know absolutely nothing about bikes.
Click to expand...

not everyone has a decathlon shop near them, for £159 you can get a decent front suspension mtb and it will last

shame as the Dunlop has probably put someone off cycling

rugby bloke said:
Sorry, not sure what your point is ?
Click to expand...

Really just that I suspect it's simply people who want a bike without knowing anything about bikes, and who have no idea why one might cost more than a couple of hundred quid - and there's always someone who will sell crap at the price people are prepared to pay.

I might have suspected most are bought for kids who only want to ride it to the corner of the street just to hang out with their mates, except that most of the lads who hang out on street corners round here have more taste and tend to have reasonably decent bikes.

I've had people asking me about cheap bikes (people who know I like bikes and know I'm cheap!) Someone recently thought he must surely be able to get one for less than £200. I talked him through the cost of the cheapest decent components (based on a couple of rebuilds I've done recently), and then asked if he'd want to risk his life riding a collection of components which were the cheapest China was capable of making.

He did manage to get a bike for less than £200, a pretty good second hand one, but if he hadn't been able to ask me he'd very likely have bought a BSO purely out of ignorance.
Last edited: 14 Aug 2018

biggs682 said:
You can buy a decent quality 2nd bike for a similar value
Click to expand...

A gentlemanly pootler, these days

Isn't Dunlop owned by Sports Direct now, along with Slazenger, Lonsdale, Karrimor, Muddy Fox and a host of other "illustrious" brand names, bought by Mike Ashley in other to tempt the unwary into buying dross?
You must log in or register to reply here.
Similar threads