Road rage from the rider of a pony and trap!

I had a very unusual incident today on the last few miles back into town of a longer ride.

I was riding along on one of my old steel roadbikes at a steady 20 or 21 MPH, minding my own business, traffic conditions unusually light when just as I passed a side road on my left, a pony and trap driven a portly middle-aged man joined my road immediately behind me going pretty fast (I don't know the stopping distances of a an equine-pulled carriage but I have a suspicious feeling he had no intentions of stopping at the junction or no chance of actually stopping at the stop line).

I ignored it and carried on doing my own thing, riding in a strong secondary position at just in excess of 20MPH. As we were nearing town there were now with housing estates on both sides, pavements, a 60Km/hr speed limit at first and then a 50, and pedestrian refuge island in the centre of the road. I could still hear the hooves behind me.

I was actually genuinely scared and didn't look back or respond but kept going, head down, in the drops pedalling for all I was worth in top gear with my speed now nudging 30MPH. I had no idea I had that sort of speed in me but I was hoping to drop him but couldn't. As I say I didn't look back but I know from the echo of the hooves he was pretty close. This carried on for almost two miles with him shouting all sorts of rude and insulting things and horrible threats at me before I turned off to go to my home.

On hindsight I probably should have got off the road and on to the pavement and let him go but I don't want to be bullied off the road when I feel I was riding in a safe an appropriate manner and doing nothing wrong. I've ridden the road hundreds if not thousands of times in a similar manner without any kind of incident or any other road user getting annoyed. You can't exactly take down the registration number of a horse and report it so I can't go down that road.

Are you supposed to yield to a horse joining from the side? I would have thought they had to obey the same traffic laws as every other vehicle?

Regardless of right or wrong, horses are unpredictable and I would give way.

What a load of pony and trap.
E

Without video footage or a streetview of the junction it's difficult to say how much spatial awareness he will have had on the run-in to the junction. But yes, it's his responsibility to give way if joining a main road from a side road (unless you're in rural France with its bizarre Priorité à droite rule)

My guess is that he didn't hear any cars so presumed the way was clear. (we've all done this, but you still have to slow down, look and be ready to stop)

The general consensus from the interwebs is that horse-drawn carriages normally go between 10-15mph, so he must have been riding the poor thing pretty hard.

Either way, he sounds like a thoroughly nasty piece of work, your best bet when you encounter those is to change your route (not pull over) at the first opportunity and only rejoin the main road once he's gone.

Chances are you'll end up meeting him again. He shouldn't have followed you so close at that speed. The verbal abuse is just an extenstion of what he was doing with the horse.

All traffic, unless under Garda escort, has to yeild to traffic on the major road when joining from a minor road.

How did he know you were gay?

I smell s***e.........a pony and trap never do more than trot on the metalled roads and wouldn't be anywhere near the speeds you say.

I can almost smell the manure.

tyred said:
You can't exactly take down the registration number of a horse and report it so I can't go down that road.
Click to expand...

Despite the lack of a registration number, you absolutely should report this. I have the impression it was not his first time abusing a cyclist like that. You admit to being genuinely scared. Think of the effect a similar experience could have for another cyclist.


On the one hand you say

tyred said:
I don't want to be bullied off the road when I feel I was riding in a safe an appropriate manner
Click to expand...

But you also ask

tyred said:
Are you supposed to yield to a horse joining from the side? I would have thought they had to obey the same traffic laws as every other vehicle?
Click to expand...

It appears that you weren't certain about who exactly had priority, or at least the subsequent behaviour planted a doubt your mind as to your rights or otherwise. Meeting a horse (and cart) in that situation is exceptional. I've found exceptional events should be treated, well, exceptionally.
Then there's the issue of the horse who no matter how well trained is unaware of any rules.

Sharky said:
Regardless of right or wrong, horses are unpredictable and I would give way.
Click to expand...

And finally on that point, you "feel" that you were cycling safely and appropriately. We all know that is very much in the eye of the beholder. You might consider yourself safe, others may not. And when they "feel" you have done something wrong they react! (Not for one second suggesting you did anything wrong here)

It was a shocking incident, should never have happened and hopefully will not happen again.
However, big picture is that you went from not wanting to be bullied to being genuinely scared. No doubt your ride suffered negatively for that event on the last leg.

Personally, I have found that my cycling (and before that my driving) became far more pleasant when I stopped thinking about what I was entitled to do and focused on what was best for me. So, for example, if I slow down or pull over because some kids are dicking around in front of me, I can choose to feel like I was bullied off the road or I can choose to feel in control of my own enjoyment.

Having said that, I live in The Netherlands where bike interactions are far less contentious than they are in other parts of the world.

30 mph sounds very fast to me.
There is a farmer near to me who regularly rides a pony and trap on the local roads. When the horse is fast trotting, the carriage is moving about 20 mph.
I am not a horse person, but anything faster would, I expect be considered galloping and metal horseshoes on tarmac whilst galloping would be a recipe for disaster within a very short time.

I would have reported it to the police explaining you may have information as to the whereabouts of Shergar!
That is one fast pony and trap!

There is one round my way, she goes fast and in summer heat, the poor things usually covered in sweat and she shouts at everyone cars cyclists, probably pheasants and anything else that comes into the road.

In general the horse riders around my way are difficult, I have had several shout at me for my light pulsing, one had a go on a cycleway/footpath that said no bridle way! haha that was great.
Last edited: 4 Jun 2019
T

The major thing that comes to mind with the speed and abuse is gypsies. Not PC I know. Agree you should report it in case of other incidents, also I would have slowed down but that's just me. Hope you are feeling better.

That was my first thought. With the type of abuse you were getting also someone with limited vocabulary skills and knowledge. Was the carriage a trap, or a gig. Some gigs when pulled by trotting ponies can reach reasonably high ish speeds. This a gig.---- 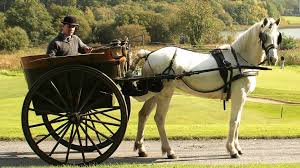 This a trap.
You must log in or register to reply here.

So much road rage...in me

Storing and accessing a bike from the cellar.

Take command of the road ?