Saville to Almeria in 5 days

A brief write up on my Spanish tour last week. I do feel a bit of a fraud as it was fully supported and we were put up in nice hotels each night, but the distance, climbing and heat certainly made it a challenge.
The week got of to a good start as both myself and my bike box arrived at Saville airport on Saturday morning. A short but surprisingly expensive taxi ride delivered me to the appropriate hotel. Other members of the team had also started to arrive so we set to work building our bikes. This again went very smoothly so there was nothing left to do but sit by the pool and contemplate the forthcoming week.

Day 1 Saville to Cordoba. 99 miles, 2,177 ft climbing
A gentle introduction to the week, some of the biggest climbs were the ramps up to bridges. We were led out of Saville by the tour organiser at a gentle pace. As soon as he peeled off the front of the peleton disappeared over the horizon and I fell in with the fellow steady riders at the back.
We fell into a steady pace, riding through seemingly endless olive groves and orange plantations. The picture below is from the only climb of the day: 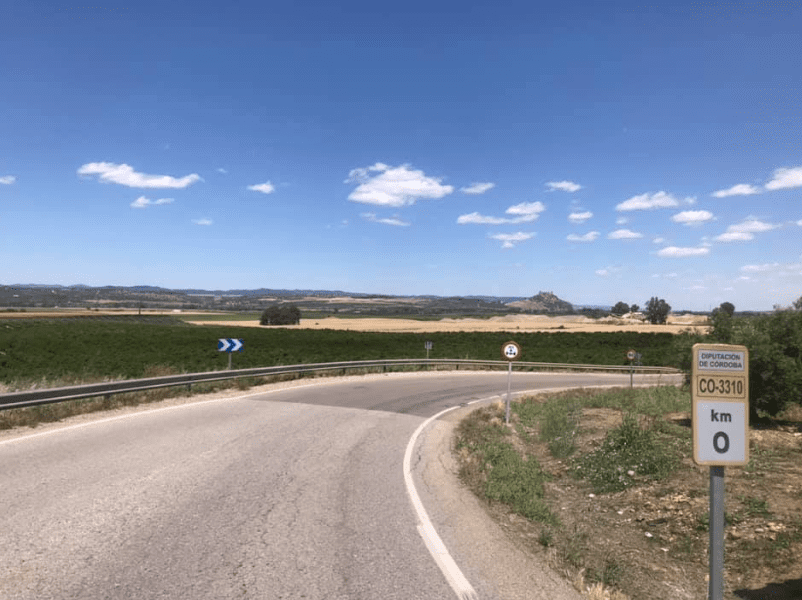 Whilst we were reminded to take care ... 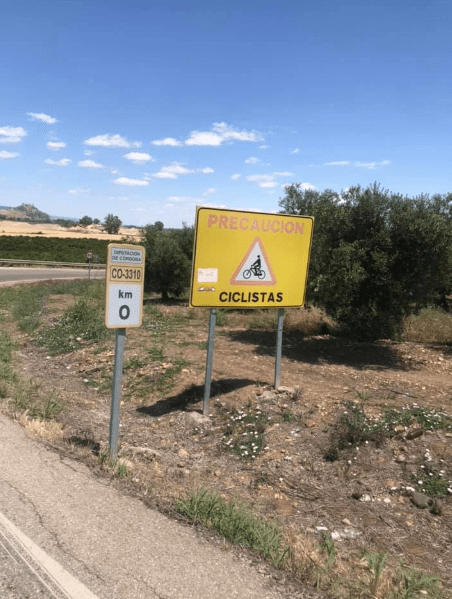 Pretty soon we were in the surprisingly pretty town of Cordoba. The final half mile along cobbled streets was hard work after 98 miles but the bar was waiting and we pressed on.

Day 2 Cordoba to Jaen. 93 miles, 7,078 ft climbing
A day if 2 halves. The morning was spent riding through undulating hills east of Cordoba. Strangely enough, after yesterday's sprint stage it made a change to do some climbing. The climbing was proving to be hard work in the heat though, something that would become a theme through the week. A late coffee / early lunch break was taken in Montoro, a very attractive town: 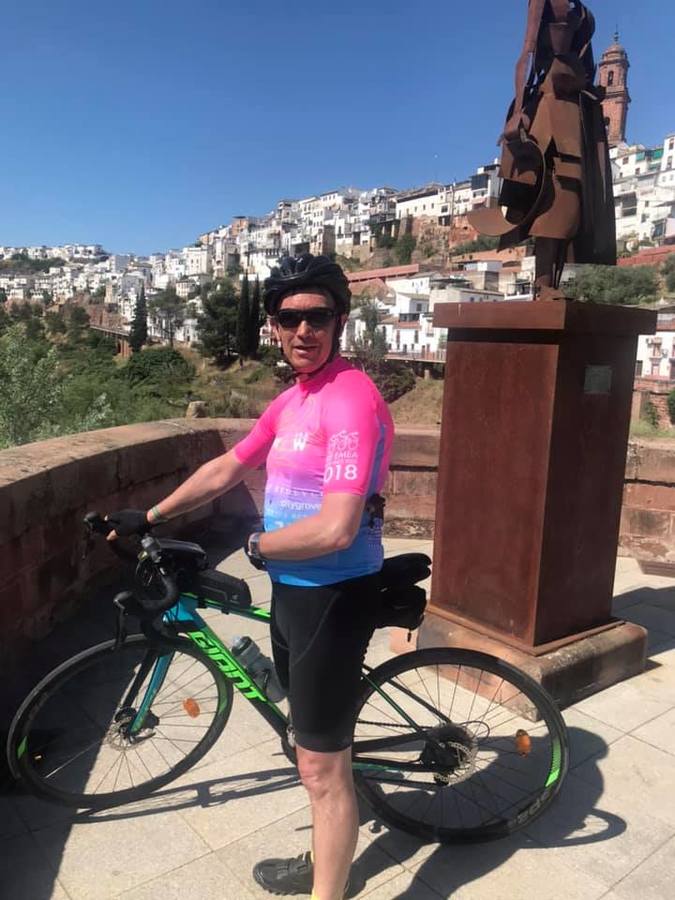 The second half of the ride was much more demanding, bigger climbs and higher temperatures. The scenery was spectacular though and the quite roads a joy to ride. At one point we went for 2 hours through the hills and only saw 1 car. There was also plenty of random photo opportunities, such as this rather spectacular overflow sluice from a reservoir: 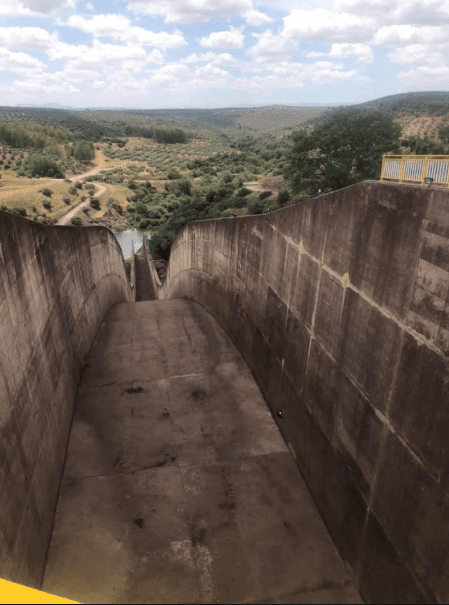 The only disappointment of the day was reaching Jaen, a distinctly forgettable town.

Day 3 Jaen to Granada. 84 miles, 8,933 ft climbing
In the briefing the night before we were warned that it would be a big day of climbing and it certainly did not disappoint. Straight from the hotel the road climbed and there was no respite for the next 2 hours when we finally reached the peak of the first big climb of the day. 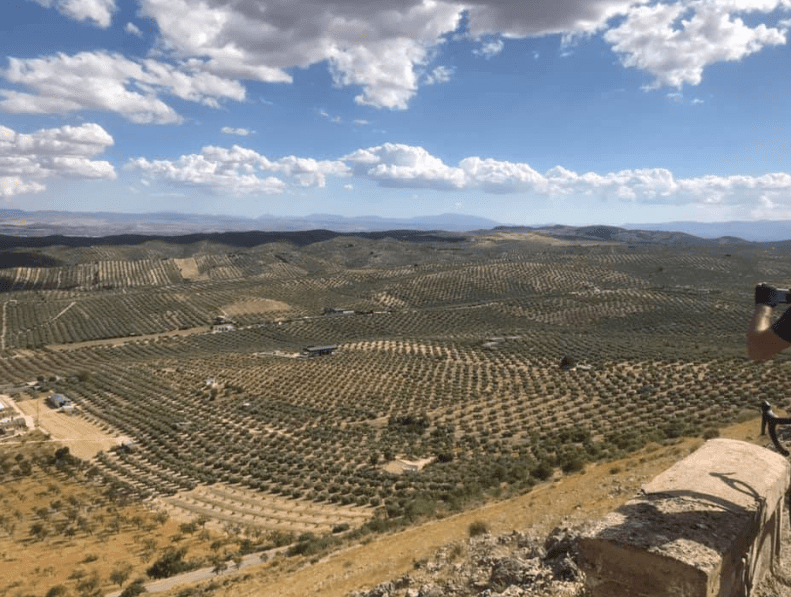 Lunch was taken in the main square of Alcala la Real, a chance to sit back and relax before a big afternoon in the saddle: 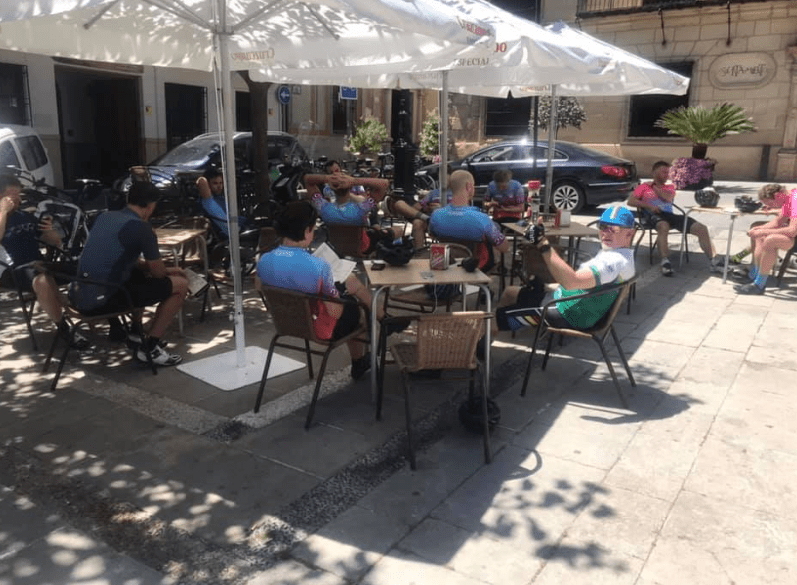 The succession of climbs and the heat really took its toll in the afternoon. The average speed dropped and we were becoming obsessive over our water supplies. The support team was doing an excellent job keeping us topped up but we still needed to stop and buy more. I think we must have got through 5 litres over the day. There was a final big climb up to Moclin, a final top of water from the support team and we pressed onto Granada. Never has a beer felt better after a ride.

Day 4 Granada to Salobrena. 80 miles, 7,243 ft climbing
Another day of 2 halves. We were spoilt for the first 20 miles, a gentle ride out of Granada, following the river down to the sea. We managed to attached ourselves to the back of a group of Spanish riders who dragged us along to the lunch stop at Orgiva, After lunch the hard work started as we climbed into the mountains. Again the heat was draining and repeated photo opportunities were required: 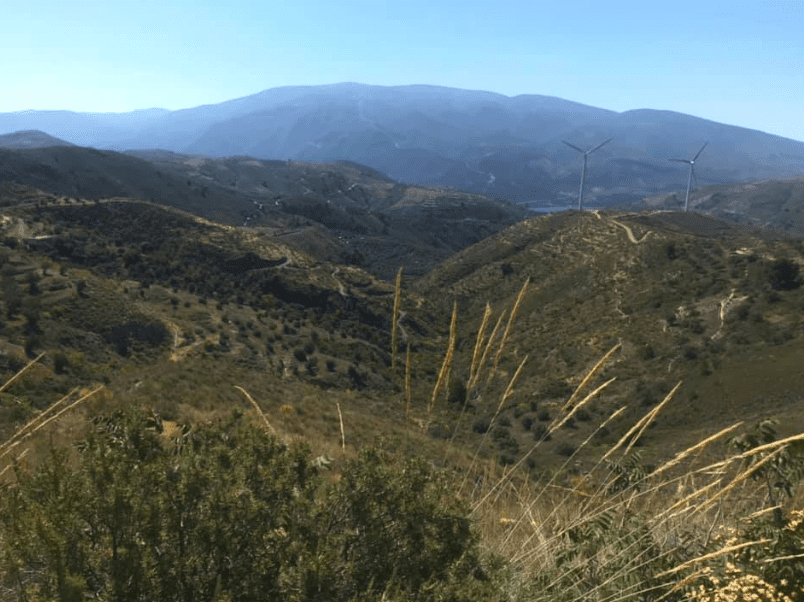 We reached the final pit stop with 25 miles to go but with the biggest challenge ahead. A final climb up through the village of Lujar to the top of the hills above the coast. The views down to the sea were spectacular were amble reward for the effort to reach the top of the climb. 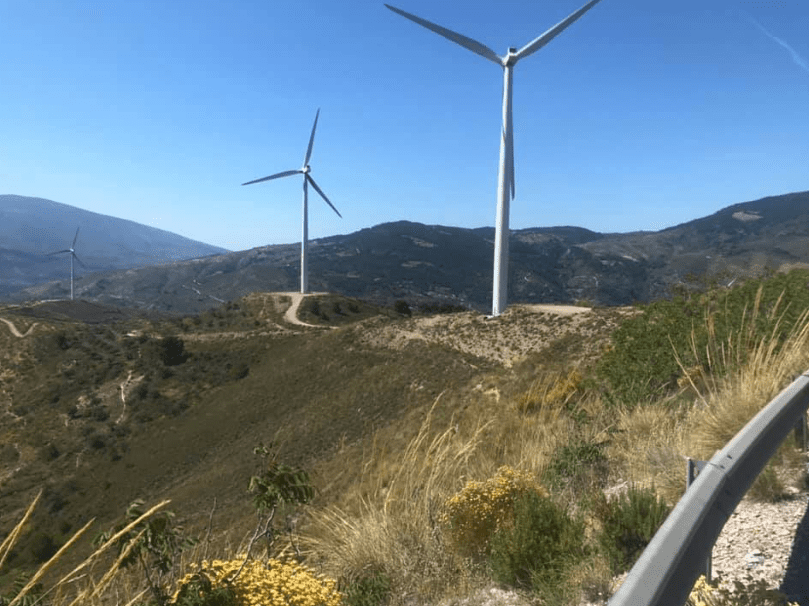 The decent down to the coast was a welcome relief from the climbing and apart from a few wrong turns in Motril we finally arrived at our hotel.

Day 5 Salobrena to Almeria. 81 miles, 3,997 ft climbing
After 3 long hard days our bodies were definitely feeling the strain and a final day following the coast was very welcome. The pace was easy through the morning and stops were plentiful. The views, with the sea to our right were beautiful all day. 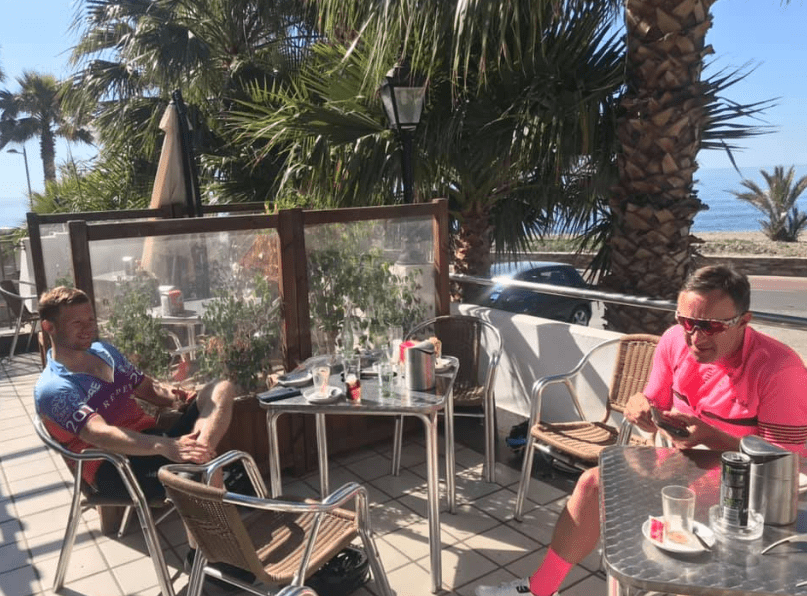 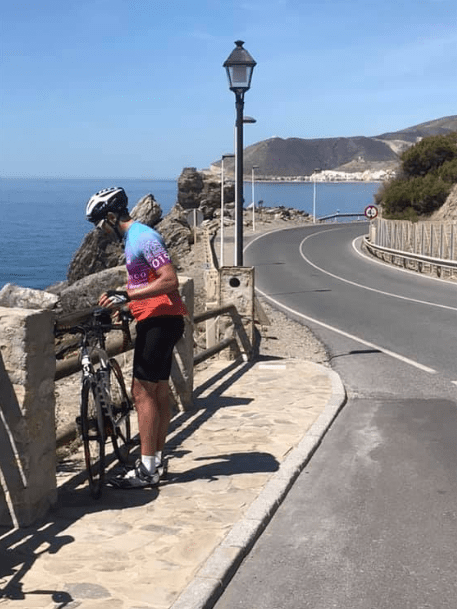 Lunch was taken in Adra, in a small restaurant recommended by a local - excellent grilled swordfish !
Progress in the afternoon was slowed by a series of events - coming across one of the support vans which had been involved in a minor RTA, thankfully no one hurt, and a puncture. Time was certainly moving on when we left the final pit stop with 20 miles to go. One final effort and an almost organised chain gang and we reached our destination

It has been an amazing 5 day's cycling, incredibly hard, in fact the very limit of what I can achieve on a bike. I am always amazed what you can put yourself through once you have started on a challenge.

Wow, that was some tour with high mileage each day and lots of climbing in the heat but it must have been a great sense of achievement to make it to the end, well done.

videoman said:
Wow, that was some tour with high mileage each day and lots of climbing in the heat but it must have been a great sense of achievement to make it to the end, well done.
Click to expand...

Thanks, it was certainly tough, the heat made the biggest difference. There were times when I doubted if I would be able to reach the end of the day.

Now, if you had cycled down the sluice at the reservoir I'd have been impressed!

Seriously, well done! Spain is fantastic for cycling and the non-cycling is pretty good too!

No way I could do that.
Maybe one day riding, certainly the next would have been spent snoozing on the beach.
Brilliant achievement!

rugby bloke said:
Whilst we were reminded to take care ...
Click to expand...

Actually, the sign is warning motorists that there are cyclists about.
OP

Thanks for all the comments, looking back I cannot quite believe what we managed.
One final word for the bike - a standard 2018 Giant Defy 3, running tubeless tyres. It ran without a fault all week, the only maintenance required was air on the tyres and oil on the chain. Not a single puncture or any other drama. There was some serious machinery on the ride but I was more than happy with my bike.

Looked a great ride/trip.
Off to Spain again in October for a week's Touring. Malaga to Seville. Looking at your pictures reminds me the last time I cycled Spain in 2016. Can't wait to go back. There's not much better.
OP

ianrauk said:
Looked a great ride/trip.
Off to Spain again in October for a week's Touring. Malaga to Seville. Looking at your pictures reminds me the last time I cycled Spain in 2016. Can't wait to go back. There's not much better.
Click to expand...

This is my second tour in Spain and I am still amazed how much more cycle friendly it is. On the first morning the whole peleton of 50 riders set off together in the rush hour without any grief, cannot imagine that happening here. Decent roads, considerate drivers, being able to leave your bike out a cafe without obsessing over how to secure it ... plus sunshine, what's not to love !
You must log in or register to reply here.
Similar threads