a friend, an experienced touring cyclist, has suffered a serious injury after the bolt holding the seat post clamp sheared. Now....this is the kind of thing that always happens to someone else, riding some other kind of bike, but

And, speaking from personal experience, having a seat post fail is a bit like having a chain go - it takes a while for you to work out what's happening - and a lot of bad stuff can happen while you're working it out. Having said that the carbon seat post got floppy before it went entirely, as did my aluminium seat post, so there was some kind of warning there.

So.......if you feel your saddle shifting - stand up on the pedals and come to a halt. And just check those bolts from time to time to see if they're cracked. There's no guarantees, but you just might save yourself some pain and suffering.

Thanks for that sensible warning,

That's one part of the bike where I would not want to discover metal failure the hard way !
D

Sensible warning the only thing I would add is make sure you do not over extend the seat post. Sounds obvious but people do it.

One of my customers once had to suffer the pain - not to mention humiliation - of having a nurse pluck shards of carbon from the area of his rectum. That he didn't sue my employer for a fortune shall always remain a mystery to me.

Dragonwight said:
Sensible warning the only thing I would add is make sure you do not over extend the seat post. Sounds obvious but people do it.
Click to expand...

they do, and it can split the frame.

Hoist on my own petard.

Saddle rail broke this morning on my singlespeed! (Ok I was riding it down a flight of stairs and did make a mess of the transition at the bottom.
-and-
last week, after 135km of Welsh off-raod loveliness, the clamp on my Gravity
Dropper post loosened on the last 500m of the day, I felt the saddle shift, and completely disassembled itself as I turned into the final pub car park of the day where the saddle fell off! Fortunately was able to retrace my pedal stokes and retrieve all the bits off the road, and a bit of the lovely Helen's nail varnish, in place of thread lock, seems to have kept it together since.

I've never suffered such a breakage, but that's sage advice indeed. On bikes that suffer real heavy use, such as MTB's used regularly for their intended purpose etc, a lot of manufacturers reckon you should replace components such as these every few seasons. Some might take the cynical view thats just manufacturers trying to jinny up trade, but a 31.6 seatpost up the bottom is surely more painful that the aching wallet an new one would give.

sheared the threads out of my seatpost clamp before i went on holiday. gave it one final turn to make sure it was held in place and one loud crack later and my bolt had all the thread from the clamp in it.
had to get another.
would not have been fun had that failed whilst i was cycling :/

It's a good job I did'nt follow the fashionistas and remove the reflector mounted by the bike shop on my commuter's seatpost. My seatpost bolt snapped whilst doing 20mph, but the reflector took the worst of the hit.

Seat post clamp bolt went once, I had to ride 30 chuffing miles out of the saddle. The Mem Sahib's phone was out of battery so she didn't get my call for rescue request.

Not funny, but would be if it was someone else :-)

I have never had problems with a seatpost or bolts. I think some of the problems could arise out of giving the bolt a few extra turns just to make sure it is secure and possibly overstretching it.

Having said that I can never remember seeing a torque value for a seatpost bolt. Has anyone else?

steveindenmark said:
Having said that I can never remember seeing a torque value for a seatpost bolt. Has anyone else?

Yes I have! Try Googling torque value for a seatpost bolt
The Park Tool advice "Seat posts require only minimal tightening to not slip downward. Avoid over tightening" sounds good to me. 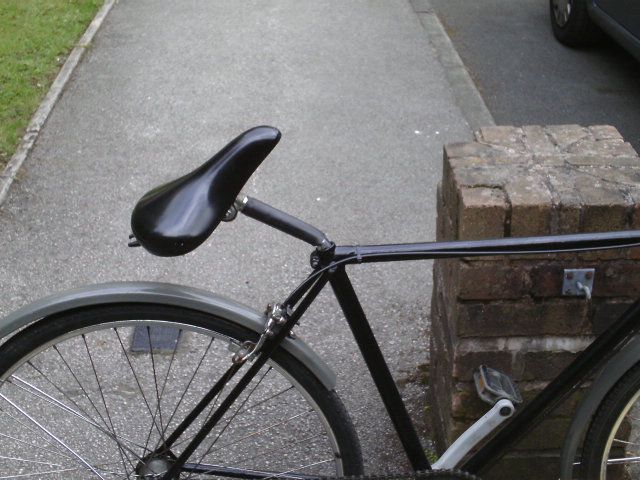