Hi to all i am new to this forum mullarky and posted my first thread last week as new bike toss up thanks to all that replied,I have looked at the new 2013 specialized roubaix sport compact (£1500)and the ribble gran fondo 105 tripple,on closer inspection/comparison between the roubaix 2012 and the 2013 models which on first impresions appear cheaper than the 2012 models,Strange i thought they are using lower end chain/gear set ups still shimano but instead of getting tiagra or 105 they are now using 2300/sora running gear,you can get a mix of 105 shifters with tiagra crank and cassette and both mechs and breaks, it seems to me they are penny pinching as it would have cost no more than £75.00 to complete the 105 set up when your spending £1500 on a bike i expect 105 as standard and they have yet to sort that ugly cable under the top tube not internal cable route oh dear think i will spend my money on the gran fondo from ribble full 105 running gear better wheels and bars/stem/saddle for less than £1250, seems like a no brainer to me thanks again all,

I have a completely unsupportable suspicion that, when it comes to bikes costing about £1000, the year's new model costs £200 more, is painted differently, and has lower spec. running gear.
Buy last year's model and do yourself a favour. Better still, buy the year before that's model.
OP
OP
B

HI think you are right i may even get a bargain as who wants an old last years colour bike ,,me if its better spek and cheaper cheers toodaroo
R

slowmotion said:
Buy last year's model and do yourself a favour. Better still, buy the year before that's model.
Click to expand...


Or this one is even better still 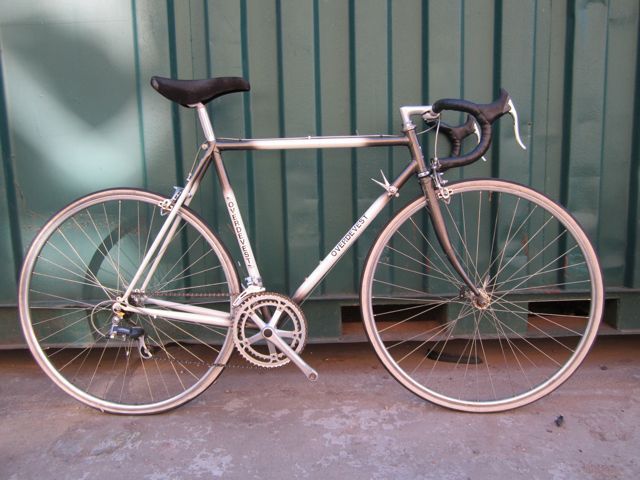 The down-spec to save money has been going on for a few years, as the Japanese Yen has dropped and they try to compensate with fitting cheaper components, for instance, my 2010 Secteur and Tricross both outspecced the following year's models.

It works against itself as well, as there's little incentive for me, for instance, to buy a newer bike as either the running gear would be lower or I'd have to go a fair way up the model tree.

It's also true that it wouldn't cost much extra to retain the 105 gear but that sort of thinking is why we are consumers, not marketing-types.

Being a tight git I have never bought a new current model of any bike. I have bought several " old " range clearouts with healthy discounts though. I would NEVER pay the RRP on any bike, the same as I have never paid RRP on any other major purchase.
There was recently a Scott Sportster 2011 on sale locally for £599 which was a 105 and tiagra mix which I thought was fair as list was £899 I think.. being Ebeneezer, I still didn't buy it !!

rollinstok said:
I would NEVER pay the RRP on any bike, the same as I have never paid RRP on any other major purchase.
Click to expand...


As a salesman I couldn't agree with the above more. Another tip is to try to find a shop where the salespeople are commission based (and sells the model you want of course) and they will be bending over backwards to make the sale. Just remember as you're getting towards the end of the salesperson's patter to go quiet whenever prices are mentioned and if you don't get a lower offer then hit him with a cheeky offer and see what he/she comes back with. Not sure if it's the same with bikes but clearing last seasons stock to make way for the next years products is normally a priority as the season ends so this will also be in your favour if you do go for a 2012 model. Good luck and let us know how you get on.

Just realised....all this said if you go for the Ribble you'll struggle to haggle as they are sole dealers of their own products (I think) but they seem good value for money anyway but why not give haggling a try anyway, what's the worst they can say?

The 2013 Specialized bikes have come down in price as well as the components, you can get a Tarmac for £1200...it might not be specced as well as the previous base model but it is £400 cheaper than it was last year.

Personally i'd look at the quality of the frame and in particular how it fits to your needs, then after that look at the shifters - not just do they work well but do you find the hoods comfortable to ride on. If a manufacturer wants to save money on the cranks, cassette or front mech then its not exactly a deal breaker. Even the pros dont use Dura Ace cassettes
N

Spesh seem to really have fallen off the spec in recent times, so the big question really is, how much better are the frames?
I have a 2010 allez, with some modest upgrades, and I really want a tarmac. However like Norm, paying a lot more for a bike with lower spec components than the one I have, is difficult to justify.

Some manufacturers can do it - at least some of the time. The Giant Defy 1 has come in for a lot of plaudits this year and it has been specced very well to fit under the cycle to work £1000 limit.
You must log in or register to reply here.