I've been looking at this kind of thing on eBay: http://cgi.ebay.co.uk/Nite-Ize-Spok...tem&pt=LH_DefaultDomain_0&hash=item3efad12e65

I was thinking that because they're unusual they might make drivers pay more attention while they figure out what the hell that lit up circle is, but do you reckon they'll be strong enough to be seen? I don't mind looking like a 12 year old on their Christmas bike in January if it helps drivers to see me, but if it won't do much good I won't bother.

Apart from anything else the extra weight on your wheels will slow you down.
Why not use the car's own head lights to illuminate your wheels?

These are the dog's danglies.....
There was also this thread on YACF.

I got some direct from Germany when I was ordering some other stuff. Believe me they are reflective...
https://www.cyclechat.net/
N

+1 to the 3M Sekuclips. Here's mine with the old reflectors left on for comparison.

Cheers, they look miles more visible (especially when stationary, I only realised after I posted that the lights I was looking at would just blink feebly until you get going). 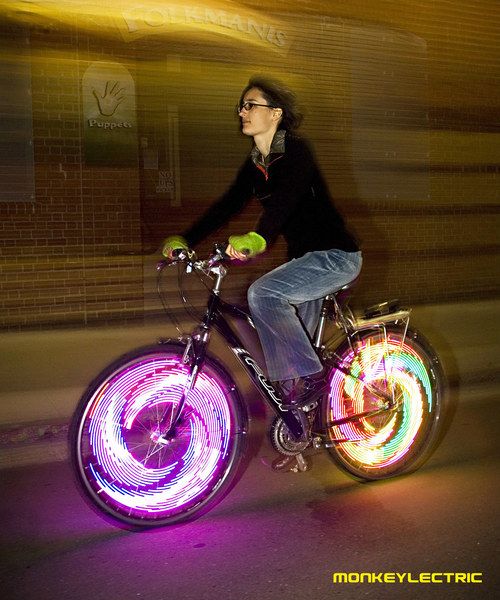 Woooooooow. I want Rosie the Riveter on my wheels!

I've have the Nite-Ize Spokelits on my bike. Not a waste of money in my opinion. As for the extra weight - negligible, they weigh 29g each, about the same as a packet of crisps. Before I got them, I was nearly whacked from the side at a T-junction by a van at 4am when I was going to work last winter. That was with front/rear lights and a hi-viz backpack on. You could argue that if the van driver (who stopped and "gave way" then pulled out just as I was going past) didn't see me with front lights etc why would he see me with spoke lights but I do think they make you a lot more visible. They are really bright and don't rely on another vehicles lights reflecting off them. Loads of people have commented on the spoke lights so the unusualness factor is a definite plus point.
S

+1 for sekuclips, they were about £12 on amazon, worth every penny, although be carful when locking your bike up, my chain lock has caused me to loose one.
You must log in or register to reply here.
Similar threads