Are these any good?do they really make a difference,im thinking about one but im unsure if its worth trying,cheers.

I have seen bad press about them in the past, but don't have any personal experience.

There was one fitted to my Ridgeback, I don't really think it makes much difference. There was one on my Sirrus too but when I replaced that with a Carbon one (with zerts) again I didn't notice the difference. What I do know is my old frame was too large for me and after fitting a Suspension Seat Post I started to develop a sore knee; replaced the post, it went away. Having said that I probably didn't pre tension it correctly.

They do 'give' a bit on big bumps, but don't do a lot for all the smaller stuff and vibrations that gives you a sore arse. I don't think it would make a road bike more comfortable. But might help on a say a hybrid used on forest roads, canal towpaths or tracks.

They sag when you sit down on them which some find odd.

Mine was a USE model, which I initially bought when I did the old Mountain Mayhem 24hrs at Sandwell Park on a dry year when lots of the course was 'corrugated'. It did help reduce the punishment from peddling hard on this sort of terrain. But a full suspension Santa Cruz has proved an even better solution since, so the seat post has remained unused apart from a cyclo-cross day out on the HONC.

I prefer the 'boingy' bit in the saddle (B67). It's not noticibly springy in use, but it takes the 'sting' out of riding on irregular surfaces (particularly surface dressing using large chippings).
OP
OP

Cheers for the answers,is a B67 a brooks saddle colin?

col said:
Cheers for the answers,is a B67 a brooks saddle colin?
Click to expand...

Does the Pope wear a funny hat? 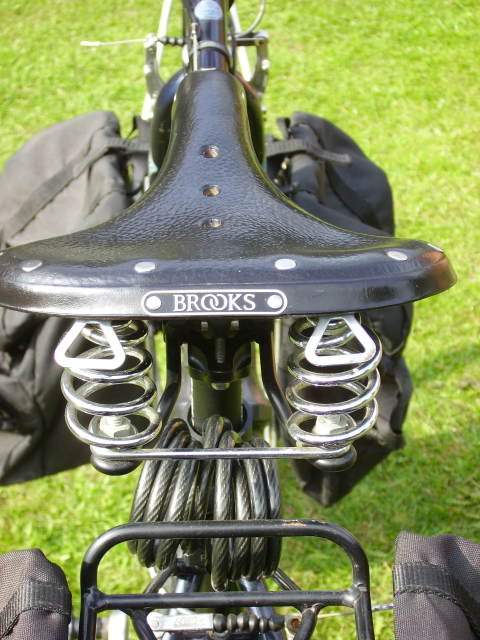 LBS say yeah for the forest

has to be no for the road

has to be no for the road
Click to expand...

As far as I'm aware the best one on the market is Cane Creek's Thudbuster. It uses a linkage design rather than telescopic. Its been around a few years and does make a real difference. However its quite a bit of money, and of course you still get the vibration through the bars and pedals.
OP
OP

Does the Pope wear a funny hat?

It gets even more interesting,i have never seen anything like that seat post before,incidentaly i was out on my bike again and the ache didnt show itself anywhere near as bad as last time,but there is a lot of food for thought,thanks for the ideas guys

I had one already fitted to a light touring bike I bought in China a few years back and didn't really find any advantage to using it!!!!!!!!!!!!!!!

I've got one (not a thudbuster), which is quite good, you can adjust the tension in it, its quite heavy though and I'm beginning to think that it might not make an awful lot of difference without it, it was just on my bike when I restarted cycling a few years ago so I've kept it. I have heard good things about the thudbuster tho - but its pricey.

There was a Post Moderne, fitted on my hybrid when I bought it. I only cycle onthe road and never thought it did any good! After some usage it became loose, allowing the seat to rotate through a small arc. This could be fixed by tightening an Allen screw, but quickly became loose again and could not be tightened further.
OP
OP

It looks like in general they dont really do much,so its stay with what i have and just use it eh? ill soon get used to it

cheers.
You must log in or register to reply here.