On my last commute home the chain dropped off the front chainring 6 ruddy times. Once home and on the bike stand found that the chain was near its limit and also there was a very large wiggle in the chain ring, put a new chain on and took the chain ring off and laid it on a flat surface and it seemed flat , measured the distance between the frame and each f the 5 spider arms and one was distinctly bent . Being aluminium and not that thick I figured if I tried bending it, it would snap so put the ring back on attached to just 4 arms. I may try bending it on the weekend.
when I looked online even though the bike is only 3 yrs old Praxis do not make that crankset anymore. . also seems specialized did a bodge on my CX crux and put a single ring on, on what was originally sold as a double ring crankset instead of putting a SRAM proper single ring on which the elite version of my bike has. since I have a praxis powermeter crankarm I am forced to buy another praxis. Off course now thier aluminium cheaper single ring mtb cranksets do not go to 40T ring so I am forced to get a carbon direct mount road single ring job costing around 270 quid and they are a bit like hens teeth to get .All the secondhand older aluminium Praxis zayante cranksets online have double rings on.
Anyway this morning commute quieter drivetrain and no drops and some rowers out on the river for some early morning training 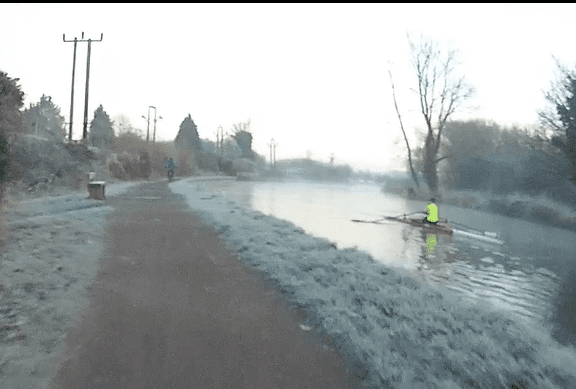 Cycling to work @ about 06.00h. with the frost on the cycle path glistening in my headlight. Magical - ! 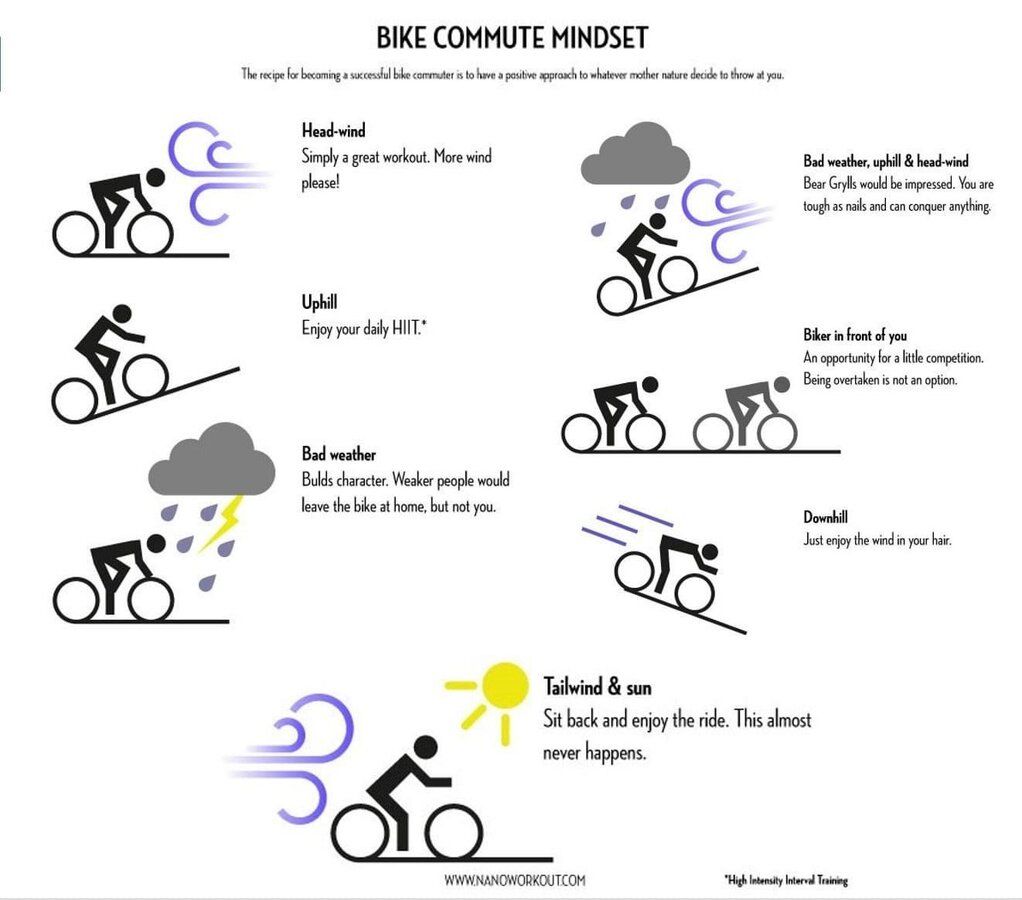 This weather is fantastic at the moment for cycling even with a sore hand from Tuesday’s off. Everything is healing nicely so todays commute was even more enjoyable to and from Bolton. 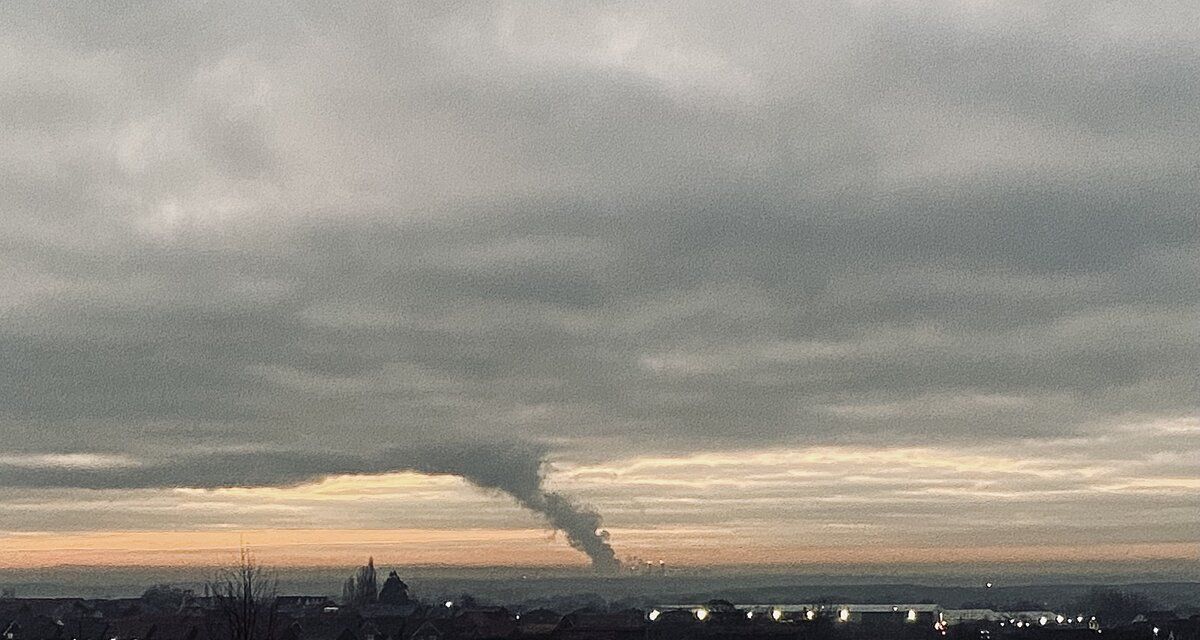 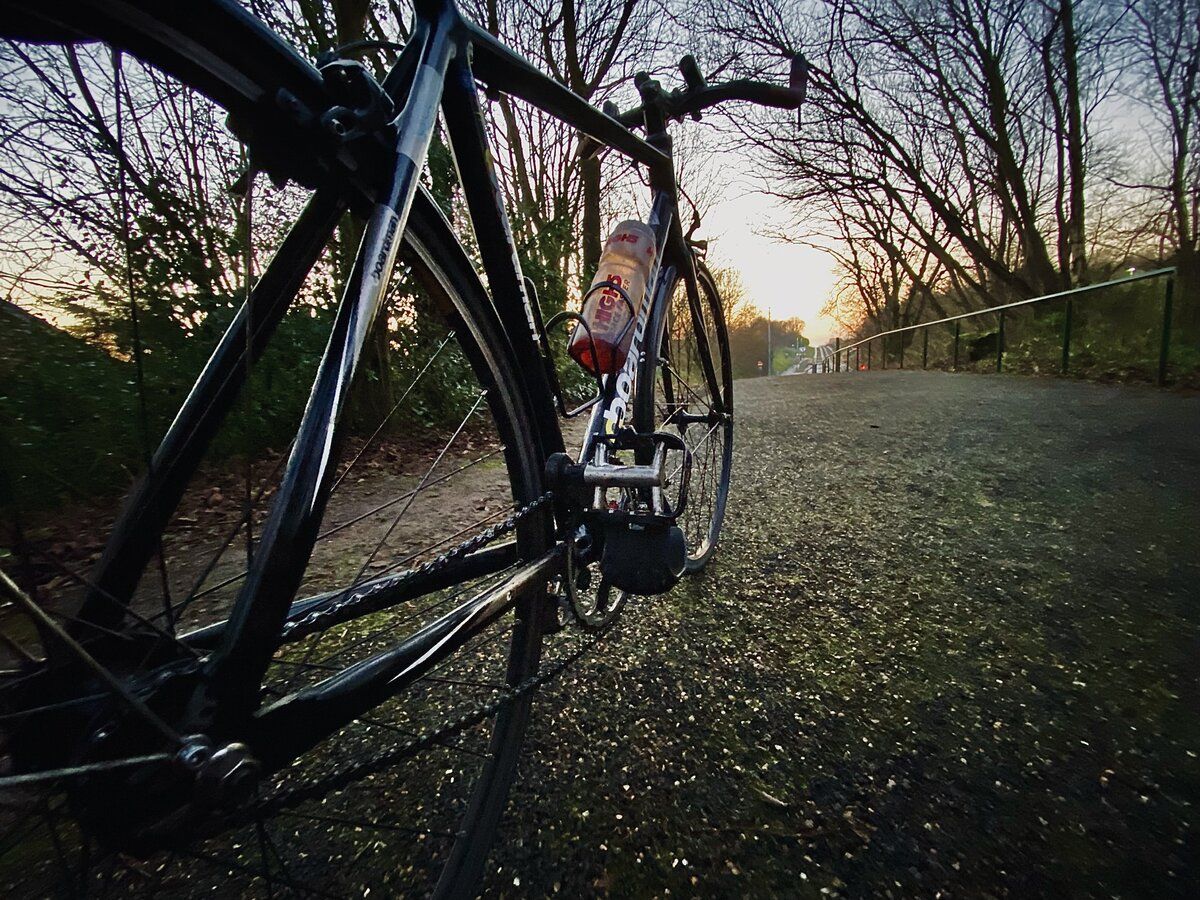 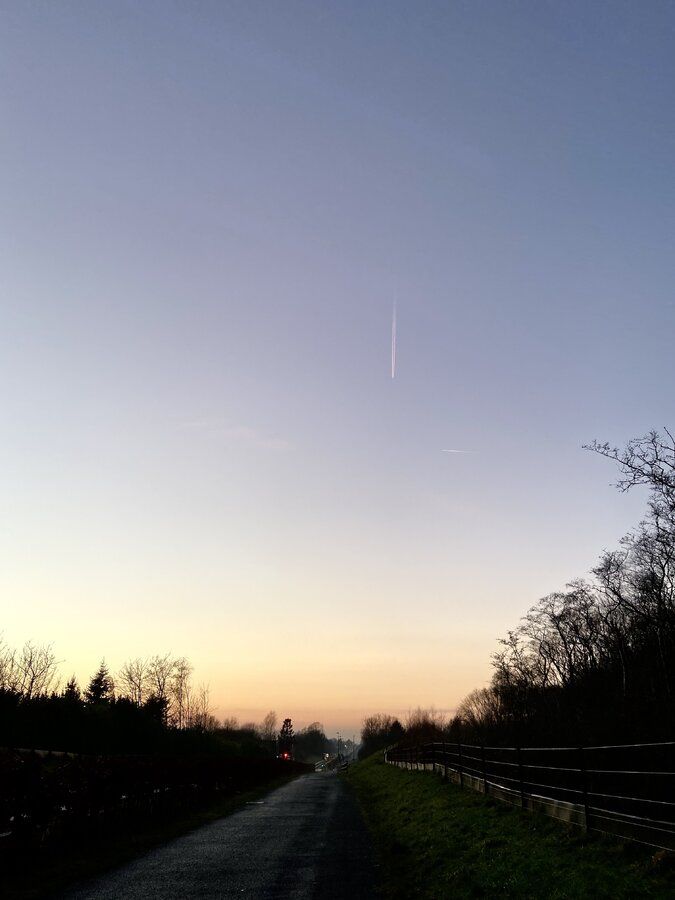 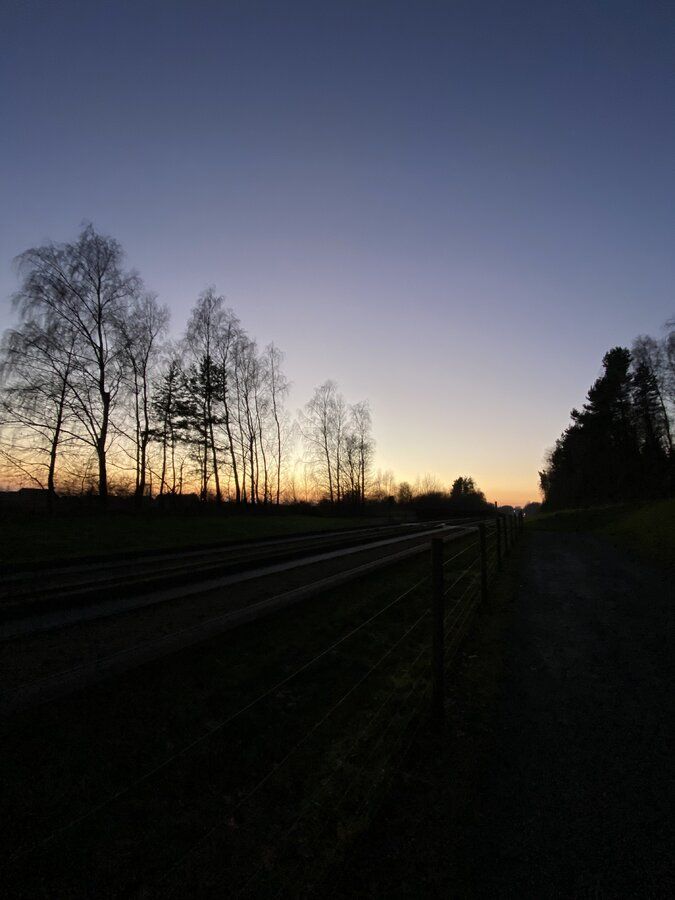 Only my 2nd commute of the year, and cycling in last night was very nice, if a little chilly. Riding home after a 12 hour night shift in freezing fog with icy roads this morning somewhat less so. Frosty eyebrows by the time I got home.

Cycle home on friday was a pain, felt that the front tyre was getting squidgy, sure enough it was soft, put some more air in it and carried on, but got progressively flat. The sealant was not sealing wherever the puncture was, but not a bad enough leak to stop me. Got to the train station and found both tyres were soft. At home found both tyres had gone down to 30 Psi. Over the weekend I tried to straighten the 5th spider arm on the crank which was only partially succesful , its a short arm and refused to completely straighten so the chain ring now held on by 4 bolts tightly, got it loose on the 5th to keep the chainring straight. Found I have a praxis Direct mount crank in the loft( came with the praxis power meter) , however now just need a praxis DM 40T chainring,none in the country, importer expecting more in, in febuary so Ill have to put up with it till then.
The rear tyre once pumped up did not leak again. The front however kept going down, even put it in the sink fully pumped up to find the leak, could see no bubbles at all. Went down again though after 2 hrs. took the tyre patially off , put more sealant in and put in the sink again. stayed up for 4 hrs. got up this morning, soft again. Thought sod it put air in, maybe the ride will sort it out. Thankfully it stayed up all the way in. Mystery as to where it was leaking from.
At the 15 mile point got a cheery on your right mate and a youngster went past on a very green Stevens CX bike. He kept a good pace and I drafted him mercicesly. to keep his speed up he sometimes rode the concrete right on the canal edge, I did not follow him there, I just hate the idea of ending up in a freezing cold canal. This is becoming quite the guilty pleasure, from yesterday's commute. 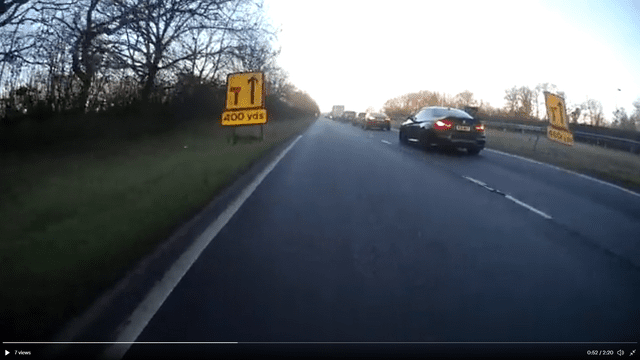 "Guilty" because of how I make my escape before it gets all Mad Max.

It was a frosty one this morning, the shared path was very slippy. But I really wanted to get the Raleigh out for a ride with its new look, deffo got a list of jobs to do on it now. Cotter pin came loose ( don't ask!!! ) so had to walk / scoot home. 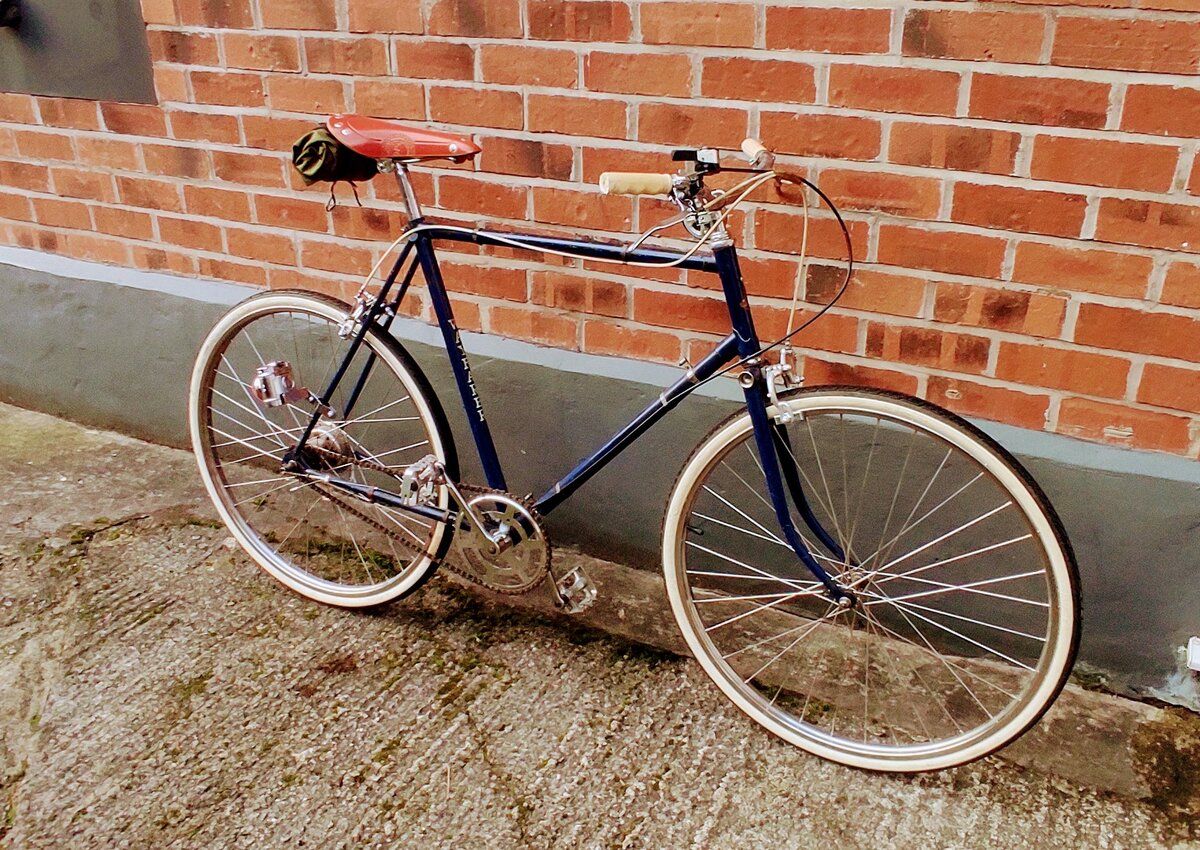 Decided to take it easy to begin with, my Xert training app tells me I am fatigued and I felt it . However by 10 miles I was on top of the world again. At the 13 mile point saw a winking light ahead so went after it. Turned out to be a young bloke in work clothes,paint spattered jeans and trainers but going at a ok pace and mucking about grabbing air on any little hump he could. I figured pointless going past for the moment, then he realised I was behind him and put a bit of a surge on, I off course responded and waited to see what would happen. After a mile or so I figured it was my turn, but no he wasnt going to let me pass and speeded up even more. We then got slowed by a convey of 3 riders, which is the first time I have seen that many in convey going my way.
Once past them he really went for it, however I knew it was going to be brief, he slowed turned and smiled and waved me past the only word I caught was "shoot". I then gave it some beans but he did not follow. 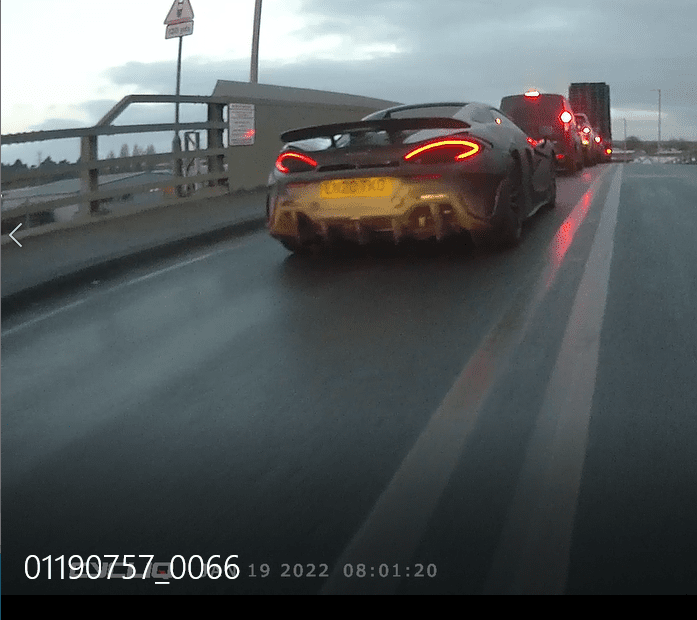 I then had further reason to grin when I got to a proper road just before work, a Mclaren car was sitting on my tail then blew past making lots of noise etc, 100yds later I cycled past him in slow traffic.

How far can I go?

First commute of the year. It was fairly uneventful, and a pleasant temperature.

Another good start to the week riding to sunny Bolton. Sunrises and sunsets have been amazing. Sadly the section near Bolton is always blighted with glass and rubbish but also the remains of a probably stolen motorcycle which had obviously been used to destroy the grass verges 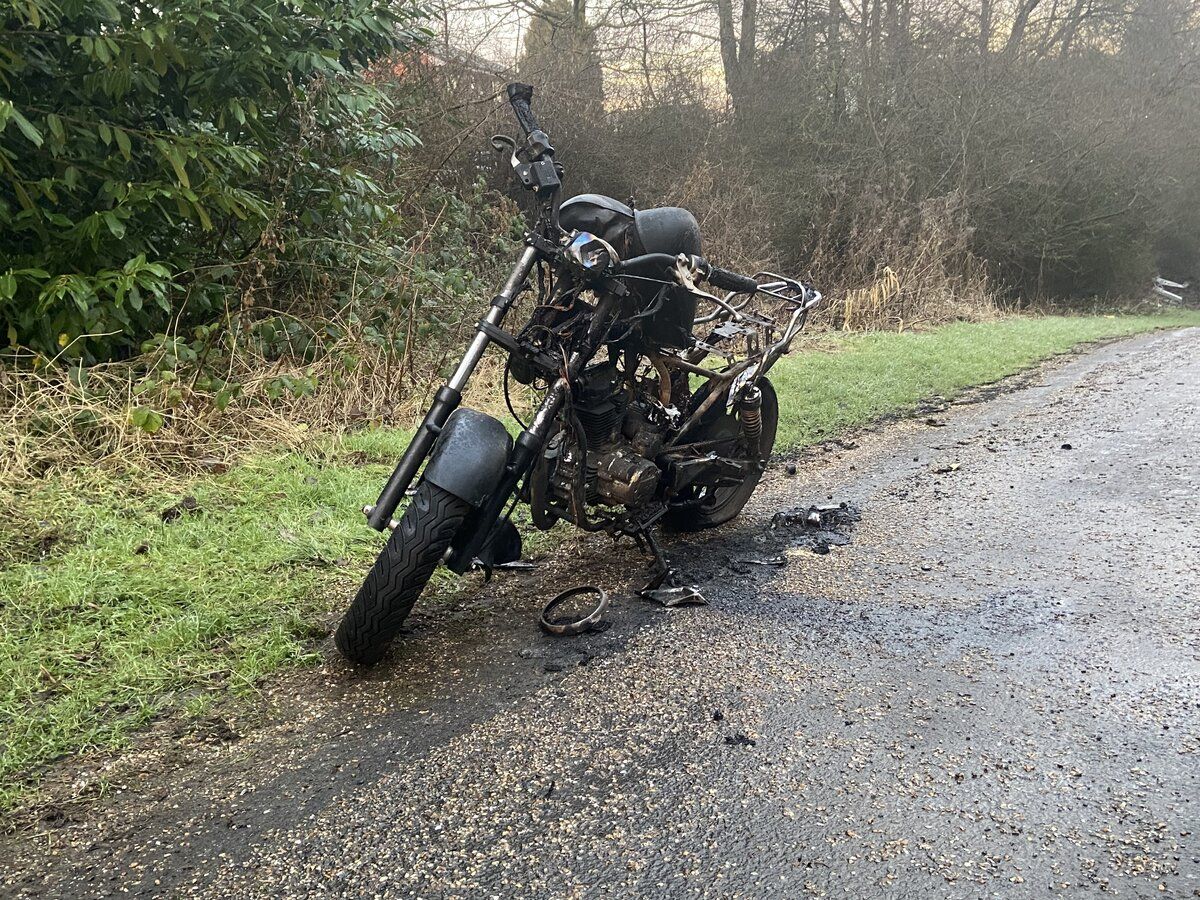 A bad day at work followed by a crap ride home. First off despite my front camera being charged all day at work it was completely dead. I thought last time this happened I got hit by a car in a hit and run, so was very wary when setting off. No I didnt get hit by a car, I got hit by a stone thrown by a primary school kid lurking in bushes. It hit me in the leg, didnt hurt just really peed me off at the cheek of it. He had 3 little mates with him, pointless stopping to say anything I was likely to get in more trouble than them.

Then when I was going over stone corrugations at Ponders End Lock my chain bounced off the front chainwheel, once I had got it back on, the noise it made made me realise it had jumped off one of the wide-narrow jockey wheels and was now wide tooth to narrow part of the chain. Had to stop again to sort that out so fingers now covered in oil.
Got home to a phone call from my son, he has to move out of his flat a month early so can he come back and live with me for a few weeks. Nice lad just a pain to live with.
S

HarryTheDog said:
Nice lad just a pain to live with.
Click to expand...

Ahh, the pleasures of having children, I mind of them well - !

Fingers crossed, I'll be back commuting two days a week when in the office. Work currently checking DFE and Local Health guidelines before inviting us back office staff back. I was really enjoying the two days a week canal commute. I've managed to lose one of my rear lights in the house. It was on the bedroom windowsill with another light, but it's vanished - I think it's become a new cat toy.
You must log in or register to reply here.

Tales from the rain

Tales from the rain