The Road To Hell Is Paved With Good Intentions

Status
Not open for further replies.

A new slant on helmet usage 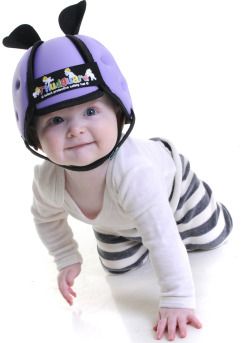 "I recently posted this image of the ThudGuard helmet on the Linkedin Playground Safety: Balancing Play Value & Injury Prevention group and asked what the members thought about it. After the predictable bout of mocking the discussion became quite interesting. There was one mother who thought it was a good idea but the majority felt is was another indication of over-protective parenting. Mind you, this is primarily a group of playground safety advocates, so their take was somewhat surprising.

Since I’ve been involved with designing and marketing play apparatus, fall surfacing, climbing walls and skateparks the issue of protecting kids from falls and the use of helmets has figured prominently throughout my five decades in this field. My experience leads me to the opinion that helmets, and other protective gear should be worn when the player has the intention of testing the limits of their skill or when the environment is unpredictable. For example helmets when dirt biking or on busy streets are a good idea but may not necessary when playing in the neighborhood.

What makes us safe is not protective devices but judgment, honed reflexes, and fundamental movement skills. The goal is to reduce the frequency and severity of injury. If you watch a toddler learning to walk they have several innate behaviors that help achieve this end. When they are about to fall forward their reaction is to resumes their crawling gait and extend their arms in what is called “protective arm reflex.” When the fall is backwards they drop to their bottoms. In both cases these instinctual reactions to the job of head protection very well.

The question arises then, what is the impact of using a safety helmet? In talking with child development physiologists they suggest several issues. First they suspect, although there is little research on this, that such protective gear may disrupt the normal progression of reflex maturation. They also are concerned that the lack of consequences when falling may retard the child’s ability to form proper assessments of their skill, i.e. reduce their judgment. Finally they speculate that it reinforces a pattern of parenting that is over protective and ultimately harmful.

From this example we can see that, what might appear as a good idea is fraught with complexity and perhaps unintended consequences."

Not certain how many here are on LinkedIn, so I've stuck with the link given.
U

I have promoted the Thudguard on this site for many years

Yet somehow the same erson speaking with the same authority is unequivocal evidence for helmet use, yet very silly when they advocate the Thudguard

Too many variables to ever know. If you stick a kid in a helmet and then throw it into everything, it will have a different attitude to sticking it in a helmet and being over the top safety mad about everything, restricting everything it does. There's also the physical environment they are surrounded by, as well as all the other people around them, together with their own natural inclinations. If a kid smacks its head on a hard surface with a heck of a force, you'll probably wish they had a helmet on and all the precautions in the world won't mean that that can never happen. Saying that, I have 2 children and would never have stuck them in one of those things, even if I had all the money in the world. Just seems a bit OTT.

Make fun all you want - helmet compulsion will come get over it.

sidevalve said:
Make fun all you want - helmet compulsion will come get over it.
Click to expand...

sidevalve said:
Make fun all you want - helmet compulsion will come get over it.
Click to expand...

If it did come I can guarantee it will get policed about as much as we stop builders if we see them smoking in their vans (at their technical place of work) after the smoking ban.

Martin Archer said:
Why will it?
Click to expand...

Probably because it will be seen by a government hungry for votes as an easier alternative to telling 30+ million drivers to watch for cyclists, show cyclists some respect and keep a distance.

Will car drivers vote for something like that then? The cycling fraturnity seem split on the idea and I cant see many non cyclists being that bothered that they would base their vote on cycle helmets.

Status
Not open for further replies.