The best way to spend holiday is to go for a bike tour. It’s never boring and gives you loads of memories. If you manage to get into funny/stupid situations - that’s even better !

This year I had a choice of 2 bikes - my good old road bike (which survived UK - LT 2014 and UK - LT 2016) and “a new” hybrid bike which longest distance have been about 100 km so far. Took a risk and decided to show to the hybrid how Europe’s good and awful roads look like. Taking hybrid also let me to have rear panniers. 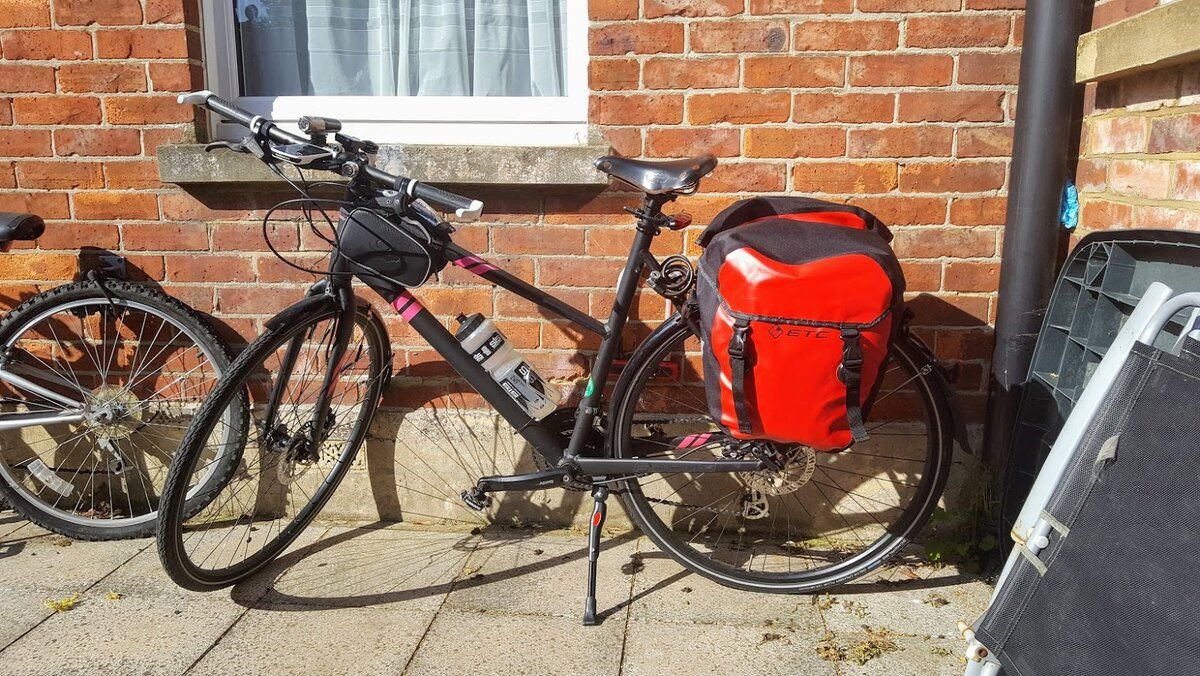 Oops No.1 - trains go to Folkestone only. That’s a minor problem as I can cycle to Dover. Set up my new Garmin 1030 and here we go.
Oops No.2 - Garmin decided to show me something that is classified as NCR. Pitch black (it was almost midnight). Fields. Bushes. Trees. More trees. Cows moo-ing somewhere in the distance. Cow pies right on my path. Too creepy even to take a picture. Very good start of the tour! Not really.
Oops No.3 - finally I’m in Dover and a nice man told me that my 2am ferry to Dunkerque in France … has been canceled! Obviously this hasn’t been announced anywhere. “Technical issues” they said. Well ok, let it be. I’ve had 2 options: 3am ferry to Calais or 4am ferry to Dunkerque. Nope to Calais so let’s wait till 4am …

7.30 am and my legs and bike touched the land of France.

Dunkerque to Antwerpen. 185 km to go. I could hear Antwerpen laughing in a distance - “no way you’ll arrive today”. But I did it! Arrived to Antwerpen just after 8pm. No adventures at all on that day. Just pedal pedal pedal … 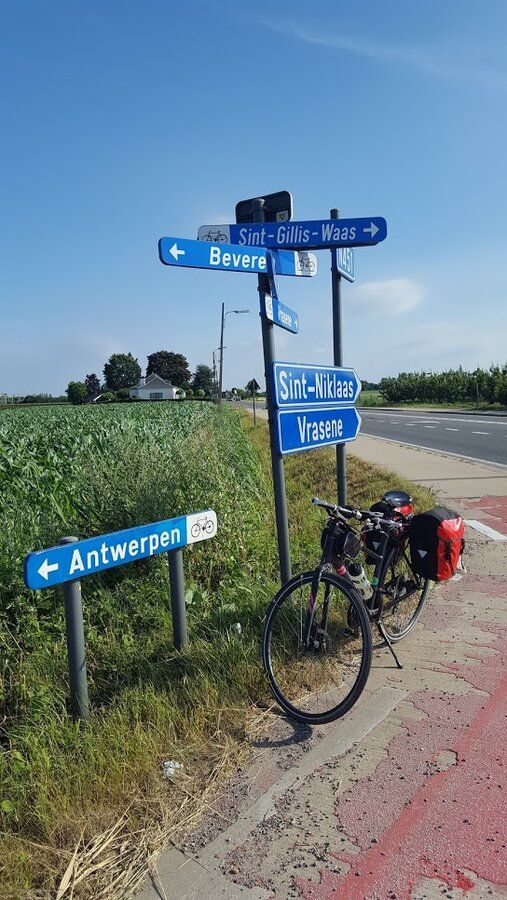 Day 2. Antwerpen to Duisburg (Germany). Almost 200km to go. Left hotel at 6am. No rain, no strong winds and the sun is shinning. But I can’t just go without any silly adventures!

Oops No.4 was my own stupid fault. I bought that Garmin only few weeks ago and I didn’t know all it’s tricks. So while playing with various settings I managed to set it up for MTB cycling. It still stick more or less to preloaded route but I was going off road. 5 hours of cycling and only 70 km covered. And where I am? Somewhere in a place called Lommelse Sahara! It seemed to be a nature reserve but it looked like forest in Sahara. Sand and trees. Nobody to see. No roads. It was the point where I really got scared that I’ll end up here and thousands of years later archaeologists will dig up my bones and rusty remains of bike thinking that I am a very good example of stupidity. 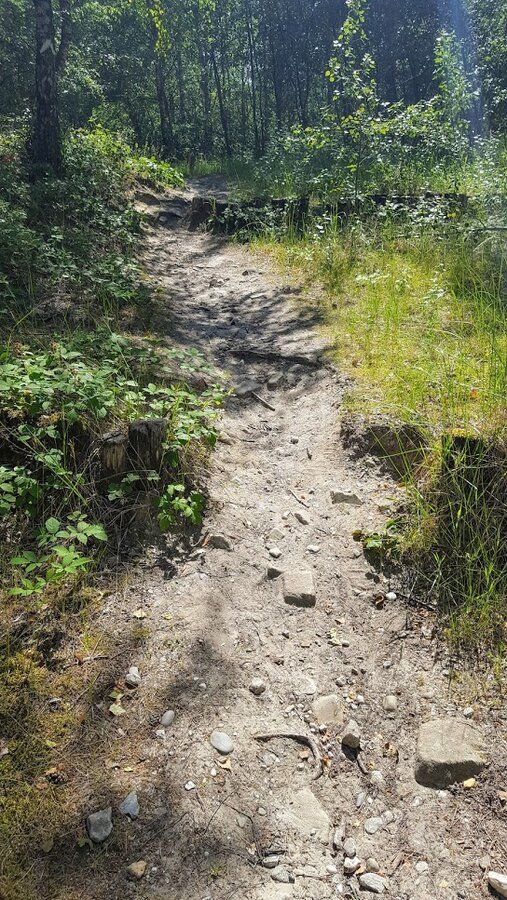 Few deep breaths and I checked the maps. Few miles of crap “roads” and then I should reach civilization.
Because you are reading this it means I escaped unknown alien planet and reached native planet Earth and it’s humans.

The rest of the remaining distance was not so exciting. Same deja vu like the previous day - pedal pedal pedal. Arrived to Duisburg after 9pm.

Eeeeh, what a relief …
OP

Oops no. … whatever. I lost the numbers. New shorts. Biiiig mistake. Never worn them before. Chaffing. My bottom looked like baboon’s bottom. Ouch.

Dulmen train station. Don’t ask me how I managed to get into the train which goes … back to Netherlands (Venlo). I still don’t know. Luckily I was checking my location on the phone when I noticed that I’m going wrong way. Also luckily train staff understood my awful German language and eventually I got into the right train.

Arrived at Bad Oyenhausen thinking that today’s adventures are over. Nope. Wrong idea. I spotted a kebab van opposite my hotel and my stomach started to play “La Traviata”. Bought a kebab and took it to hotel expecting to eat it there without anybody watching me. But I forgot to ask for a fork. Nevermind - I’ve got a Swiss knife! Which has got 2 blades and no fork …

You probably think why I didn’t eat it with my hands. I did. After I cut my lip with the knife a moment later after a thought “it’s not sharp and I won’t cut my lip”.

Other days weren’t so interesting until I arrived to Poland. Different planet.

I knew there are really bad roads … this time Garmin decided to show me them. Thanks darling, love you too.

First mini adventure in PL was in border town Slubice. Don’t believe when booking com says that hotel staff speaks English. Or Russian. At least they speak Polish … So I arrived to hotel only to find out that I didn’t book it. Or that’s what receptionist told me. Right, ok … 30 minutes of emails and phone calls and problem sorted. Mistake of the hotel staff. No apologies though.

Next day. Slubice to Jakubowo, 146 km. Should be Slubice to Poznan but I had an unpredictable lift by car from Jakubowo to Poznan. Saved me 50 km of cycling in the rain.

Left Slubice via shortest route which means using some field trails. This time I was glad I didn’t take the road bike. Would have to push it instead of cycling. Met a couple of elderly locals at 6am in the middle of some fields. I was surprised how they fitted themselves into (I think) Fiat 126 (which takes only 0.5 human into it). They probably were surprised seeing a cyclist in that God’s forgotten land. 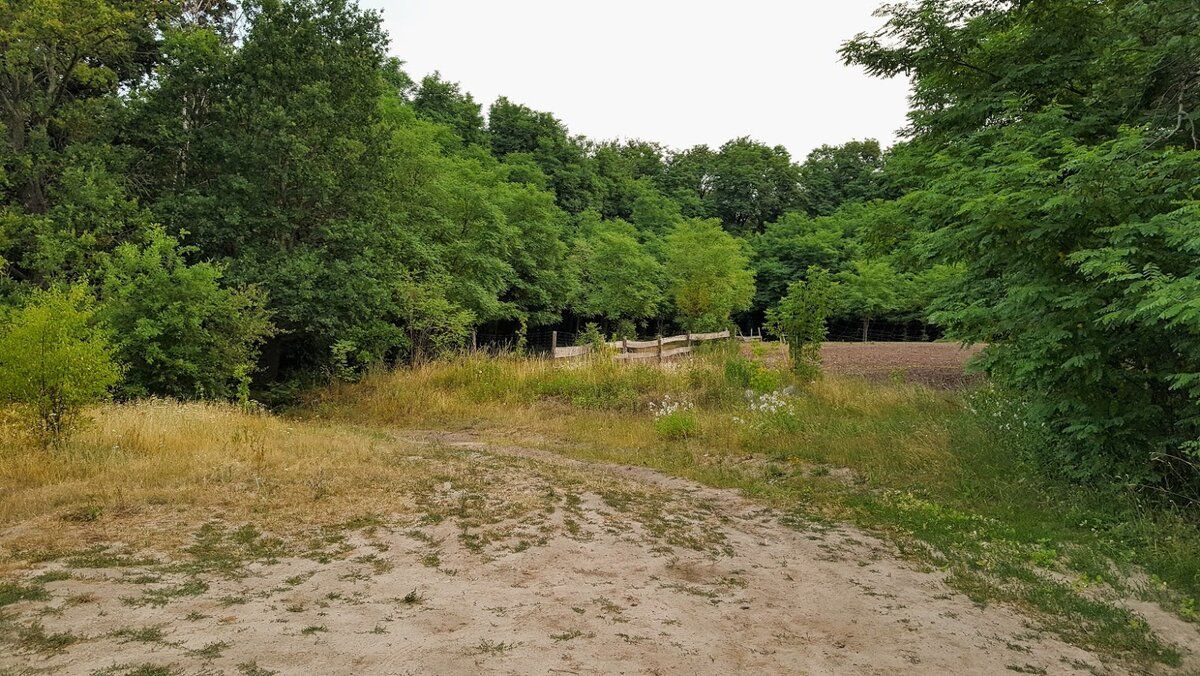 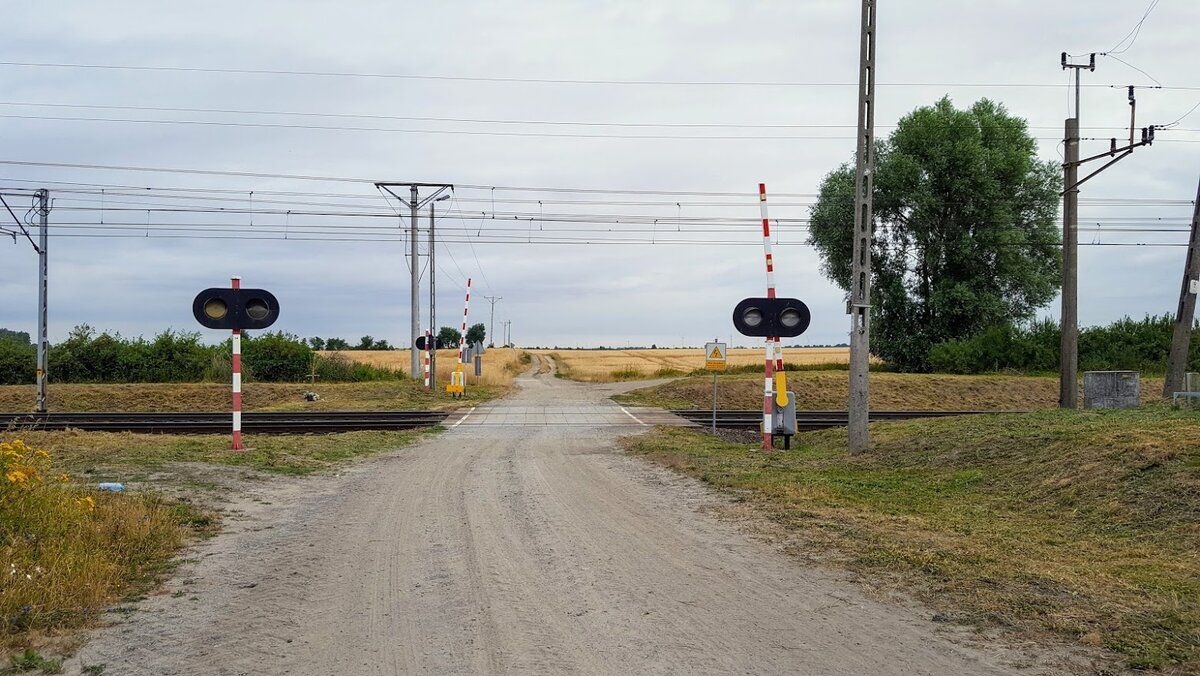 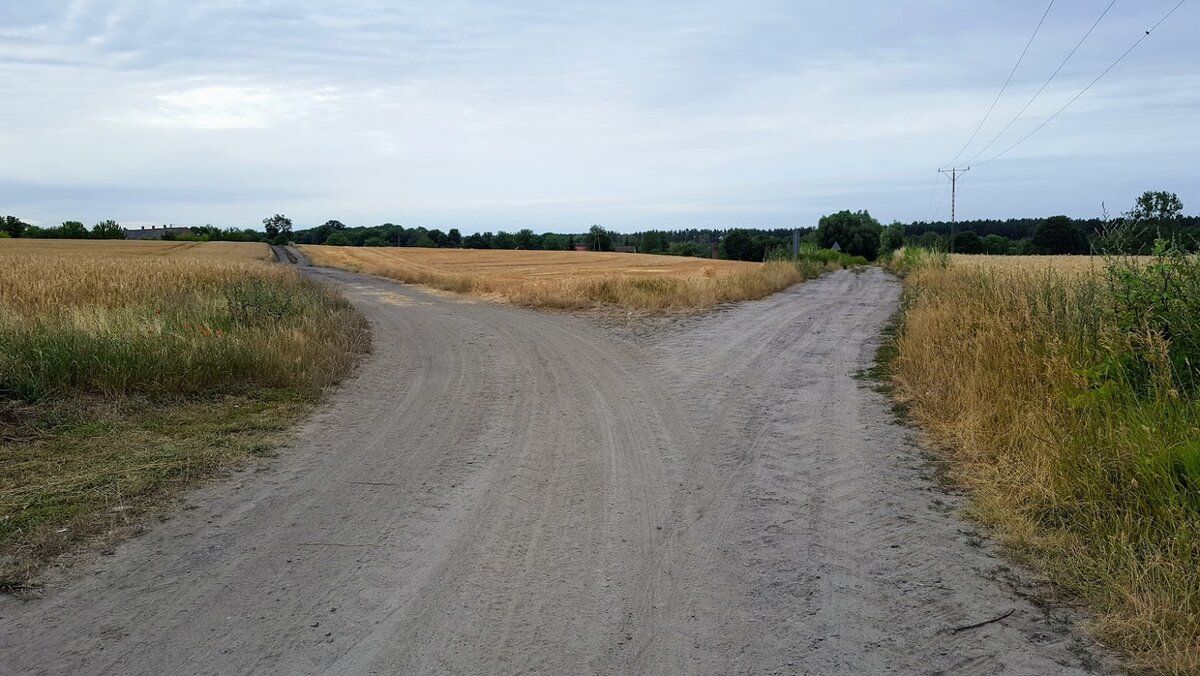 Weather turned into patches of rain and wind. Yak. Didn’t like it.

I met a male cyclist a few miles to Jakubowo sitting at the bus stop and talking on the phone. Next to him was a Santa Cruz MTB. Hmmm, he didn’t fit the road he was cycling on. I overtook him, later he overtook me etc. By Jakubowo I caught him again and asked if he needs any help. It appeared that he lives in Poznan and does MTB cycling. He went to a nearby forest in the morning but the weather turned crap so he decided to go home. He also told me that he phoned his wife asking to pick him up by car and offered me a lift to Poznan. I didn’t refuse.

I forgot to ask his name … 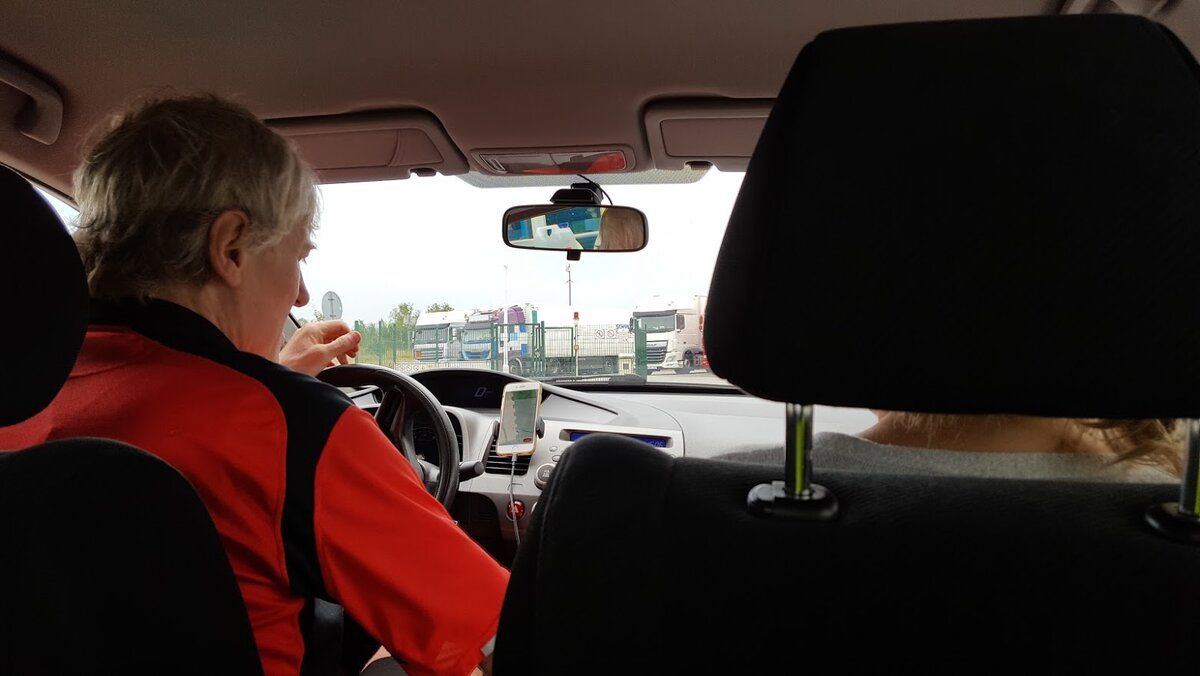 Yaaay!
A new travelogue!
Your mileage is a bit scary!

Looking forward to the rest!
OP

Day no. … whatever. Poznan to Grudziadz. 215 km. Jeez. Bloody headwind all the way. I got fed up with it so much when I reached city of Naklo nad Notecia that I almost gave up cycling and seriously thought about catching a train. Decided to carry on though.

It was also raining all night in Poznan so it was good introduction to what’s possibly waiting for me later in the day. First serious threat of rain was near Bydgoszcz (almost broke my fingers by typing this word). Dark clouds going to my direction didn’t look very friendly. But it was just a threat. Sky decided that nasty headwind is enough at the moment. 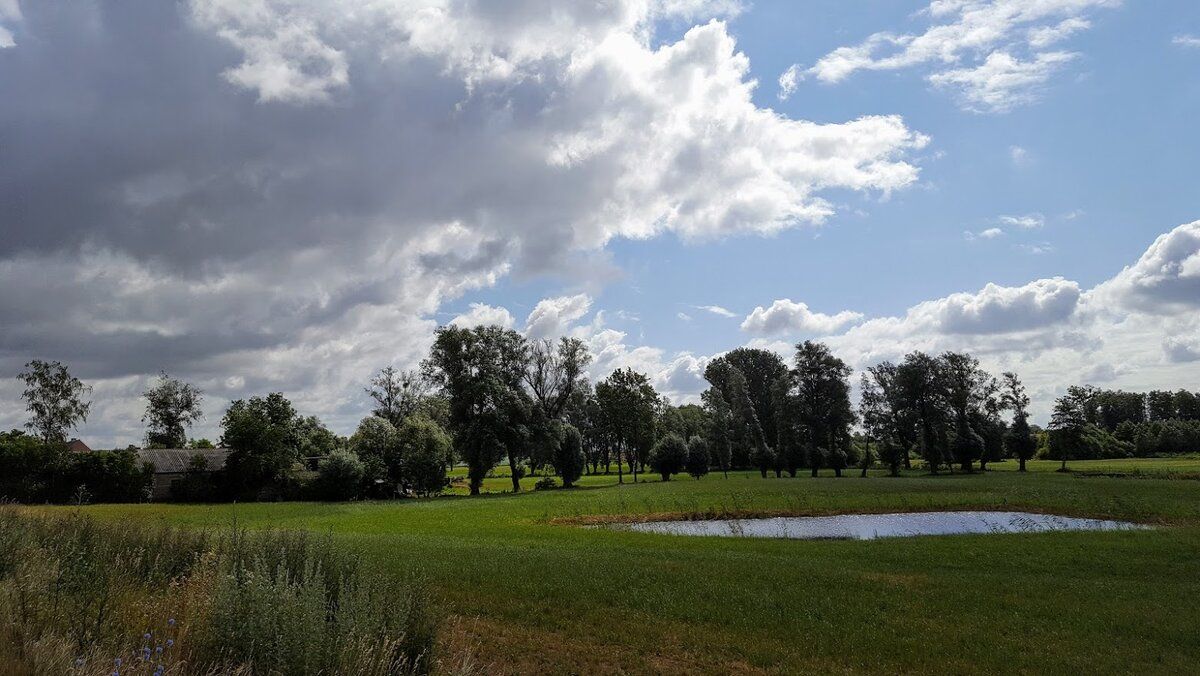 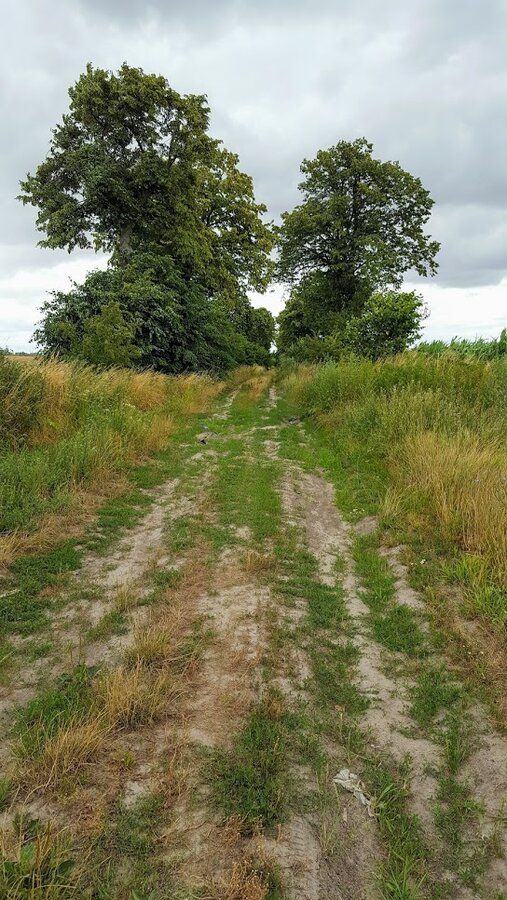 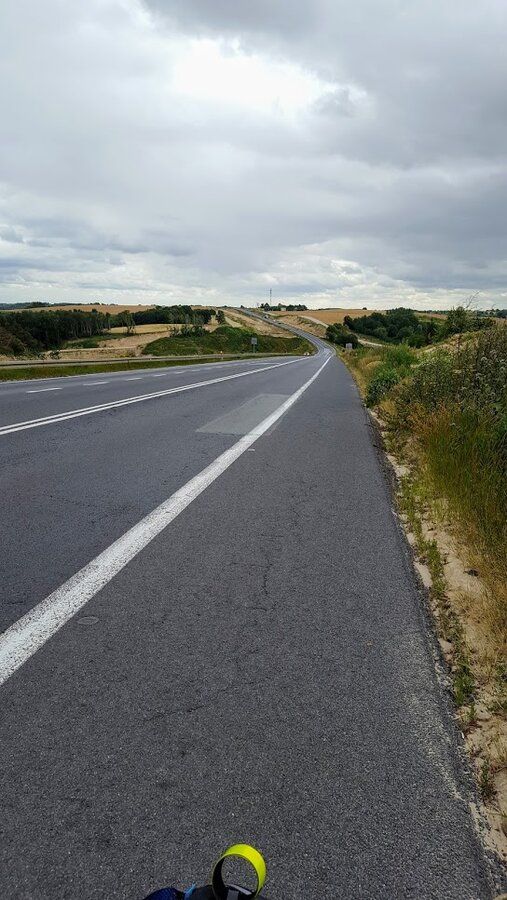 Few miles left to Grudziadz and I see dark clouds again. Again. Run, Forest, run! Skies opened up as soon as I went into hotel. 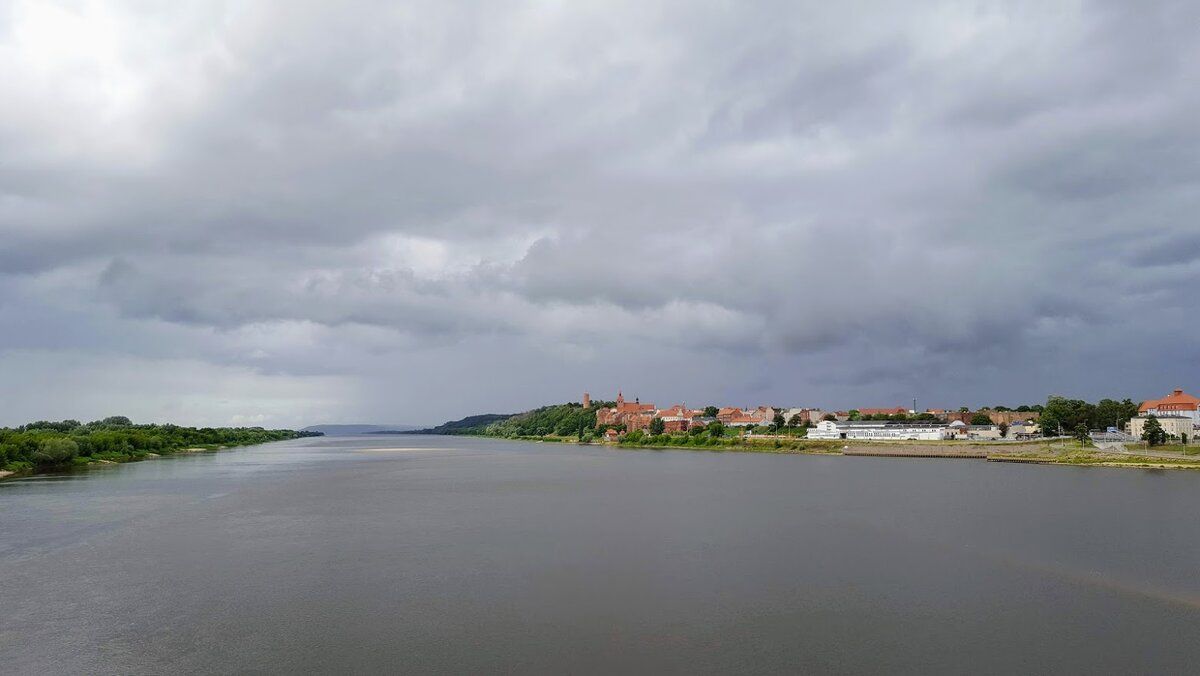 Next day was a mix of train and cycling. Cycled about 37 km from Grudziadz to Jablonowo Pomorskie and caught a train to Olsztyn. Then Olsztyn to Mragowo by bike again. 100 km by bike that day.

As this part of Poland is poorer than southern one I was introduced to some really awful roads. Almost impossible to ride. I was happy again that I decided to take hybrid bike with wider tyres. It would be very interesting experience to cycle by road bike with 25C tyres. Hehehe. 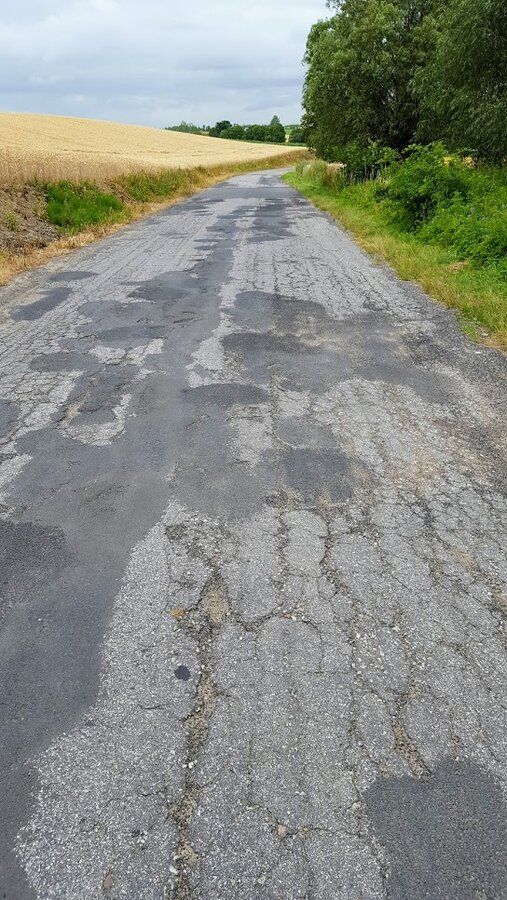 Finding Jablonowo Pomorskie train station was another interesting experience. No road signs showing it. Nothing at all. Even the building itself looked like a random house. I had to ask locals if it’s really a train station though railway said I’m at the right place. 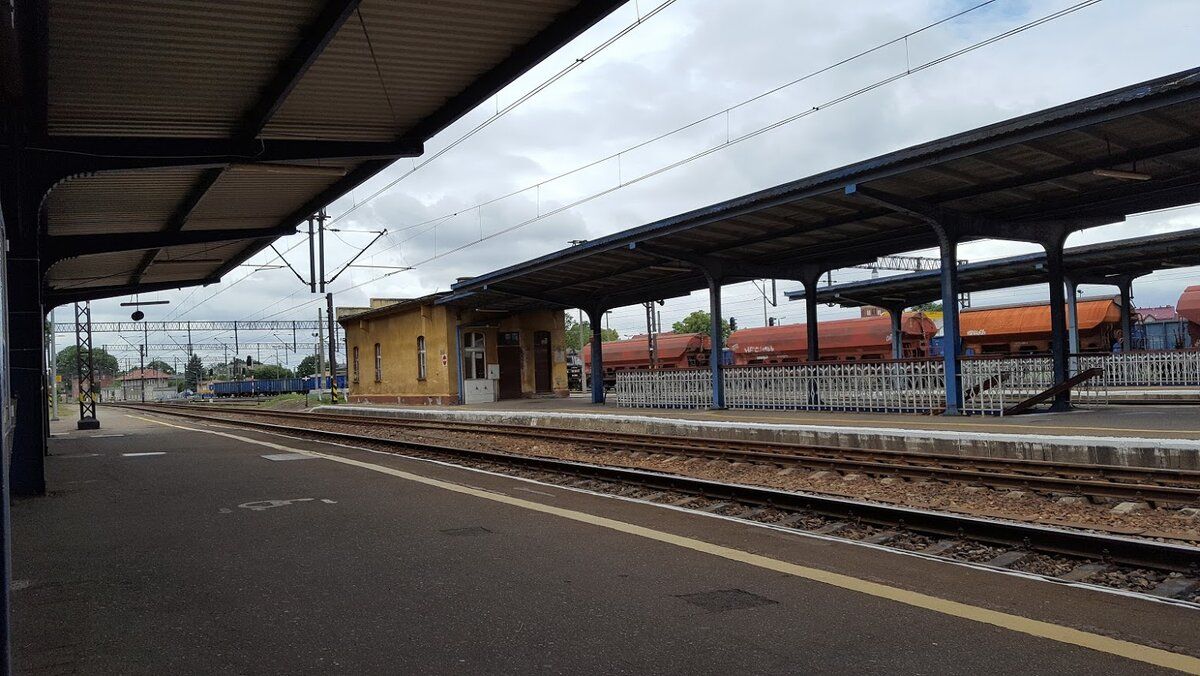 I was greeted by rain in Olsztyn. Very motivating.

Anyway, the shortest way to get from Olsztyn to Mragovo is the road No. 16. And there are massive roadworks on this road with signs “no cyclists” just outside Olsztyn. My Garmin knows nothing about it. Damn. Quick look around if I can find some workers. Found one near me and he told me how to navigate back onto road 16 few miles further avoiding the roadworks.

And it was a bliss to cycle road 16. Very wide hard shoulder almost all the way from Olsztyn to Mragowo. I also asked a policeman if bicycles are allowed on this road. Just in case.

Met a German tourist few miles to Mragowo. Quick chat with him at a bus stop and he headed to a campsite while I went to hotel.

Mragowo - Sejny, 161 km. Woke up at 5am only to see monsoon rain outside. Oh God, really? Quick check of trains showed that I have no choice but to cycle. Eeeeh …

Have you ever tried to walk with cycling shoes on slippery floor tiles? Try it. I can promise you a show “Cow on ice”. Receptionist didn’t even smile while I was trying to keep myself on 2 limbs instead of 4. I was laughing though.

It was heavy rain all the way from Mragowo to Olecko. Felt like I’m cycling in a bath full of water. At least no strong winds.

Visited a petrol station to buy food in Olecko town only to see surprised faces of staff. It wasn’t raining there and I looked like soaked sponge.

Sun finally came out when I was going into Suwalki though dark rain clouds were chasing me all the way to Sejny. 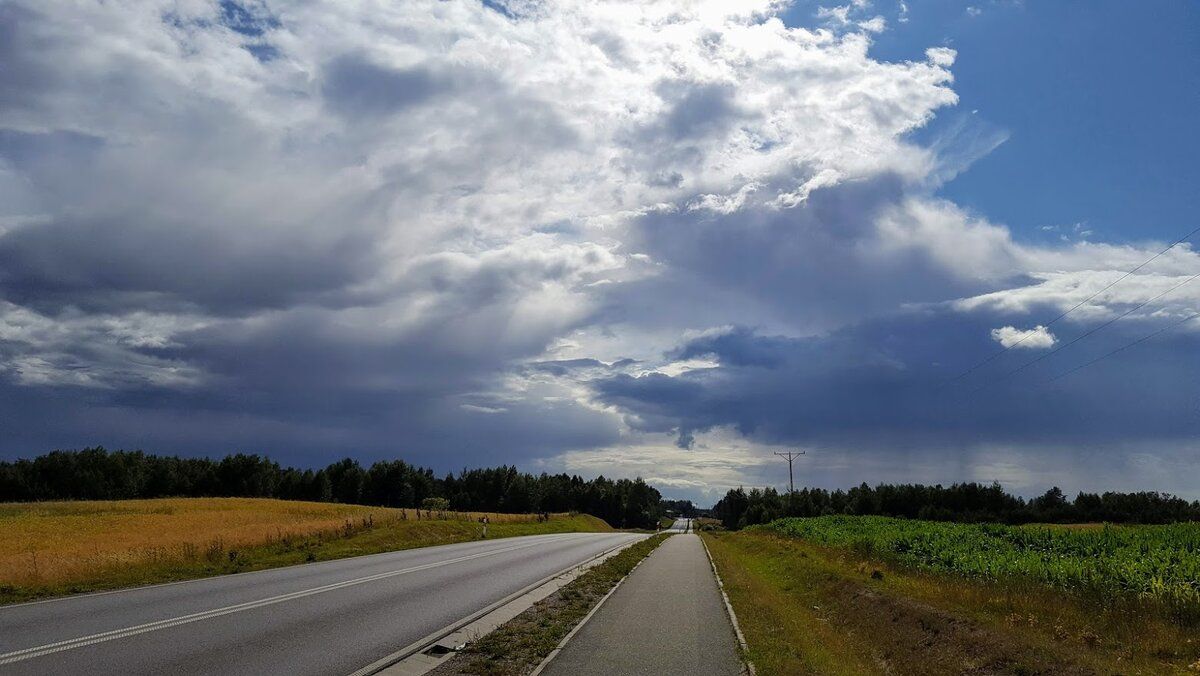 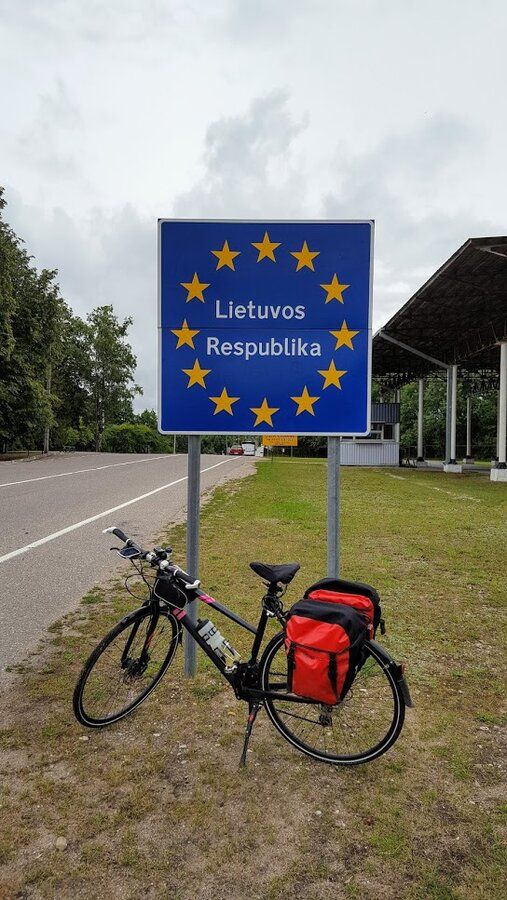 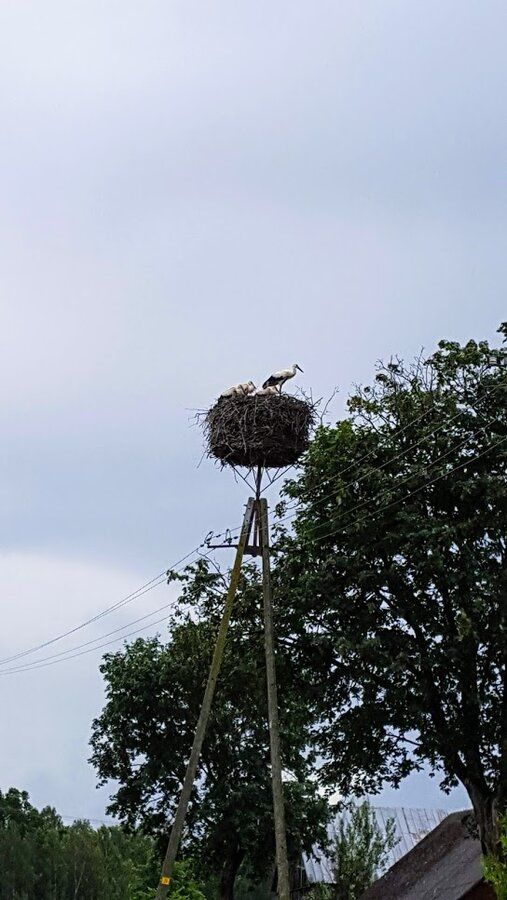 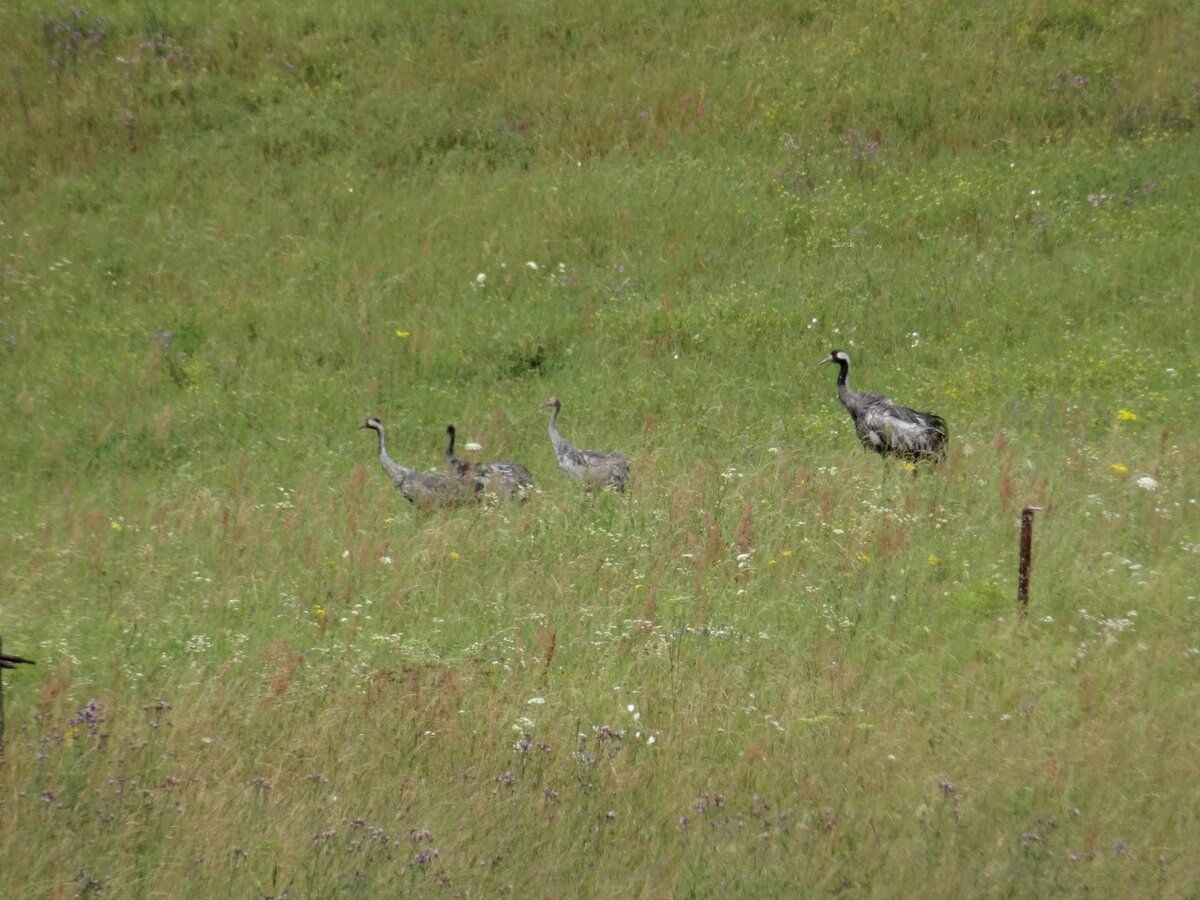 HobbesOnTour said:
Your mileage is a bit scary!

Just reading this again.
I'm making it 8 days! Are my calculations correct?
OP

I think it was 10 days. I didn't write about some days in Germany because there was nothing interesting to report.
You must log in or register to reply here.
Similar threads