Anybody fancy meeting up/ riding down to watch the Tour of Britain. I intend to ride to Surrey and will probably watch the ride on Crocknorth Road, which is on the way up to Ranmore Common.
http://maps.google.co.uk/maps?hl=en&tab=wl

Meet at Westerham around 9.30ish, then hopefully go along the A25 (if it is closed to traffic)

Then ride home via Box Hill towards Croydon

This will be a reasonably fast and hilly ride.
OP

It's a rolling road closure, so we might avoid the A25

I'm already booked that day I'm afraid. But if you're planning to go down Chipstead Valley Road on your way to Croydon, check that is has been re-opened. We went that was on the Winchester ride and had to scramble over deep holes and piles of debris soon after the station.

rb58 said:
I'm already booked that day I'm afraid. But if you're planning to go down Chipstead Valley Road on your way to Croydon, check that is has been re-opened. We went that was on the Winchester ride and had to scramble over deep holes and piles of debris soon after the station.
Click to expand...

Chip Valley road is operational and nice & smooth now. Rode along there on Saturday morning and the trenches are gone

I'm planning on going with a friend from my club. We'll be riding down from Great Missenden, in the Chilterns.

Was planning to watch the start and finish to meet up would be great !

We'll be making the enormous trek from our central Guildford flat to the High Street, probably aiming to be somewhere near the finish line for both traverses. Say hello if anyone recognises us in civvies without a tandem.

I rode up the hill a few weeks ago on the Brompton, just after they'd done the publicity photos. It's a short sharp ramp, but the cobbles make it much worse.

We will be going via Windsor, Woking to somewhere around Barhatch Lane hill (cat 1 sprint, due 14:32). Then make our way to the finish (Guildford, due 15:30). I'll prob wear club jersey as in my avatar - shout if you see me!
Frank

Looking at the highlights today, the crowd was immense at the finish - and for several hundred yards beyond; five or six deep. I'd expect the same sort of crowds tomorrow - there's a good forecast, a double pass through the town centre and extra entertainment in the form of a hill climb competition on the cobbles. And Guildford is only 30 miles from central London.

Am in a pub in guildford :-)
Was a great day out. Barhatch hill was superb. So close to the riders. Noticed Cavendish was hanging in manfully.
Then we rolled down to guildford to catch finish. Very busy, great atmosphere; not bumped into any cc'ers yet!

We wandered out at 11 to do some shopping, and, observing the crowds, stayed. While I was in Sainsbury's R had found a spot on the barriers about 10 metres from the finish line - we were joined by our brother-in-law and nephew who'd come down from Glasgow for the day. That's not as daft as it seems - he works on the trains, so gets free travel.

The crowds were about 3 deep for the first pass through, then after a thinning for lunch gradually built up until by 3pm it was 7 seven deep around us - based on what was around us I'd guess on there having been about 5000 people on Guilford High Street.

We saw a few decent hill-climb sprint contests - one enterprising chap had entered to publicise his bamboo bike project based in Zambia, and it was good for the soul to see an over-40 up against a young whipper-snapper in the final. Sadly, the whipper-snapper won very easily.

The commentary team were having real problems with their TV feed, and were relying on i-phone pictures to tell us what was going on. Perhaps they should have posted someone in the club above us, where I gather Peta Todd, 25, from Newham, was holding a Cavette - I have a photo to post to find out if my informant was telling the truth.

And so the Manx Missile came hurtling up the hill. The highlights have suggested that Sky have been so dominant in the stage sprints that I suppose it's not surprising that he managed to take something with a nasty sting in its tail.

Bit by bit the other riders came through, and the field was so spread out that we were stuck on the wrong side of the road to get through for the presentations. But we wandered down through the bus and van park past the sparsly attended camps to the enormous crowd around the Sky bus. Bernie Eisel (I gather - I'm not strong on recognising faces) did a meet'n'greet before Cavendish, looking absolutely shattered, rolled through. After a brief spruce-up he emerged into the throng looking utterly lost, as if he really didn't know where he was, and frankly he'd rather be anywhere else thank you very much.

I'll post up some photos when I've taken a look at them. We've now come back to the flat for a sit-down - 6 hours on one's feet is more tiring than 6 hours on a bike, and tempting though it was to find a pub we're both dry at the moment.

We stopped in Dorking just after the sprint line. Was very surprised at the amount of people out to watch. 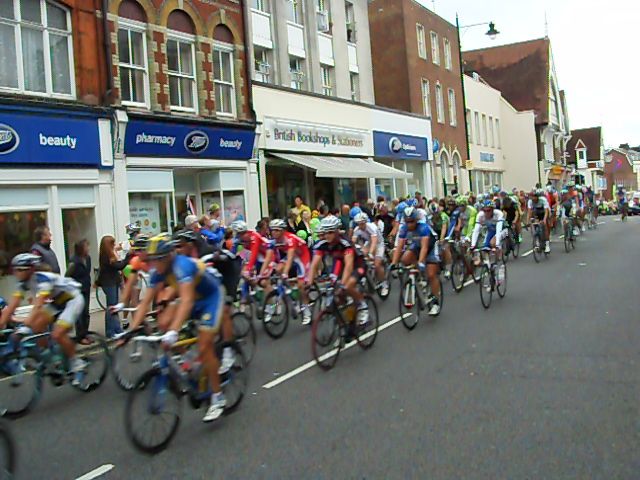 As soon as the peleton passed we dragged ourselves up to Ranmore to watch one of the climbs. 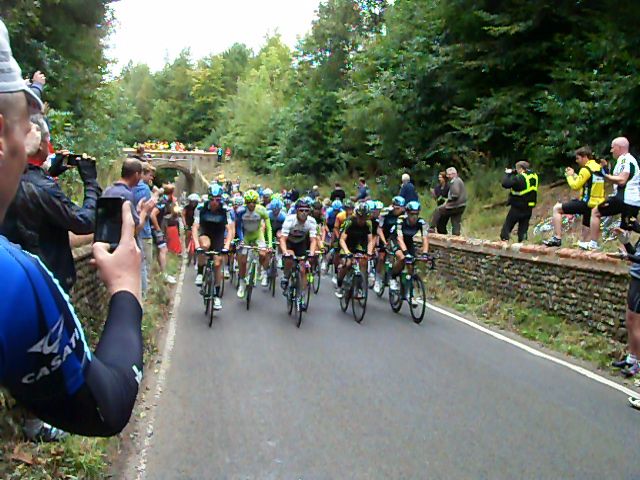 Got nice and close... 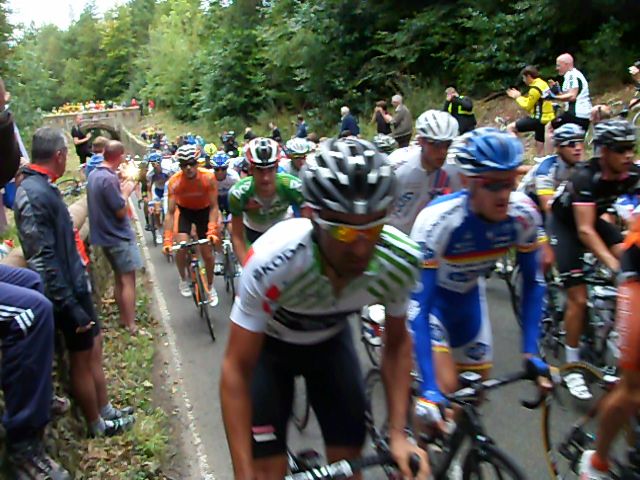 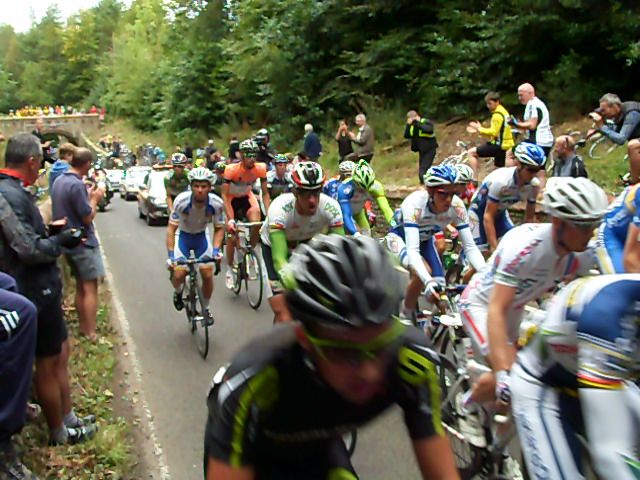 We bumped into StuartG in Coulsdon but no one else.
Always great to see a lot of bikes and people out today.

Our scheduled club run was to the Queens Head in East Clandon which coincidentally was only 100 yards from the ToB turn up Staples. There was a great group of folks there - I'll post some photos later. At this stage the gang of four were about a minute ahead of the pelaton.

We came back through thr Horsleys and up Ranmore Common under that same bridge. The traffic was still sorting itself out and loads of people were soaking in the atmosphere. More relaxed, more enjoyable than the ORR methinks.

Nice that the weather improved throughout the day ....

We saw them three times. The first was by accident, as we were riding up towards Shere and there were suddenly lots of police cars and sirens, and they flashed past within what seemed like a few seconds on a fast section.

Then, up on Barhatch Hill, which was fantastic. So close to the action and loads of people. (Just spotted myself on the TV highlights

).
My pictures didn't come out very well as we were closer than the limitations of my phone camera allowed, but they do convey a bit of the feel of it well 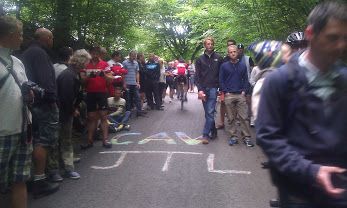 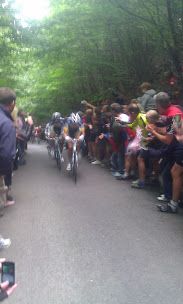 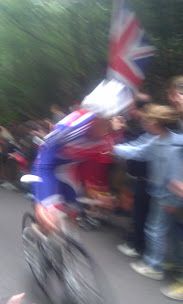 Then we raced down to Guildford to catch the finish.

Great day out!
You must log in or register to reply here.
Similar threads