Distorted Vision said:
I would have thought that the Coronavirus has had a negative impact on bike sales ...
Click to expand...

The opposite; the Coronavirus Pandemic resulted in a huge increase in demand.

Early into lockdown 1.0 exercise was encouraged but with gyms closed and travelling far from home frowned upon; cycling from our front door on quieter roads was for many an attractive option. Keyworkers often preferred to use cycling as an alternative to public transport. Those suddenly working from home on 100% salary found themselves in comparison to their normal routine time rich, cash rich, a desire to live for the moment (but how), in need of some retail therapy and a desperation to actually leave the home/workplace and get outside; a shiny new bike ticks all those boxes in one go! All this and the sun came out! Initially stores were extremely busy, but bikes quickly sold out and especially for popular models supply has yet to recover.

Put into context the store that employs me will receive less than 10% of the forward orders before year end, bikes that were ordered back in the spring! I've sold quite a few bikes already due mid and even late summer 2021; I have never had supply issues this bad in my thirty four years in the cycle trade. To reference a similar thread comparing Domane to Emonda at the moment dealers are pretty much trading off their pre season deliveries and on the stock they actually have as opposed to using their store models to show case a range then offering the customer a choice of models and colours that are then ordered from the supplier. When these initial deliveries sell through and with such long lead times for the replacements it is looking like the next few months will be tough; children's bikes included, nearly all of them are due well after Christmas. This is where larger retail chains often score over a solitary LBD as their business model is to share stock across the stores and they buy in a larger variety of sizes and models and in greater depth; as a result they are doing very well at the moment. In comparison a quality LBD will not hold as much stock but compete by offering a superior and personal service, from initial advice with product choice, perhaps including a 'sizing' then 'collection fit' and more extensive after sales service for example, all helps them to justifiably survive and hopefully thrive, this business model is what I personally covet far more; but it's far less valid if they can't get stock of course.

Although the product choices have been far less that has actually helped sell what has been available of course and many stores had enough stock that most are actually reporting that takings have increased compared to the previous summer. Using Distorted Vision's example as a reference although the Madone and Emonda ranges are scarce, most Trek dealers would have pre ordered these before March and many of these were not received until late in the summer so expect to see some stock; perhaps not necessarily the customer's first choice but there is a good chance they can offer something viable. The Emonda is more popular than the Madone, so expect dealers to have bought more of these and at least initially availability would have been better; although now it's approaching mid November even these may now be getting scarce in stores.

It's the next few months with this stock running out and extremely long lead times for replacements that I know many are now anxious about what the short and mid term future holds; I know I definitely am, I've still to go back full time from lockdown 1.0 let alone 2.0!
Last edited: 13 Nov 2020
OP

Was about to pull the trigger on the Trek Madone SLR7 but my wife won't let me spend so much on a bike. She has said I can spend no more than £1800 so I'm now considering this gravel bike. A significant change in choice from an aero I know. 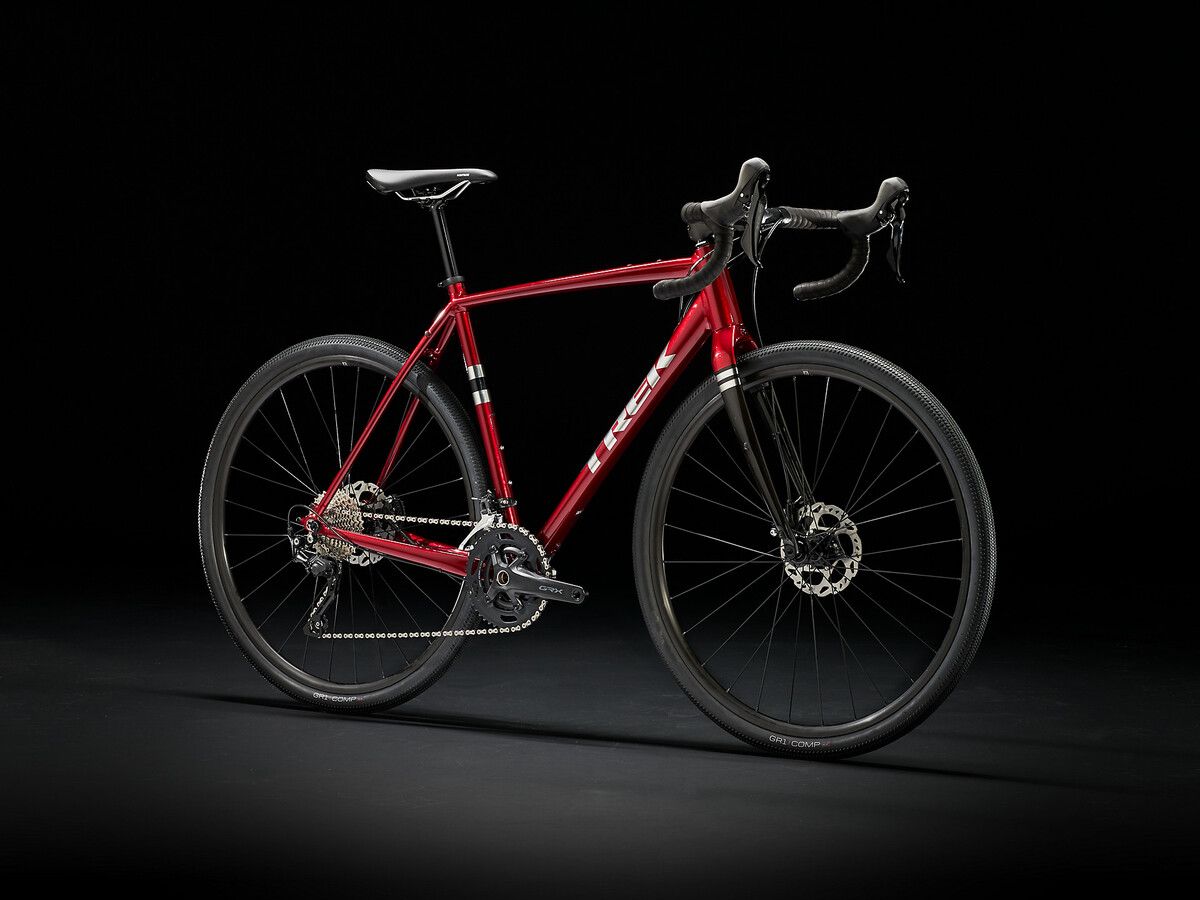 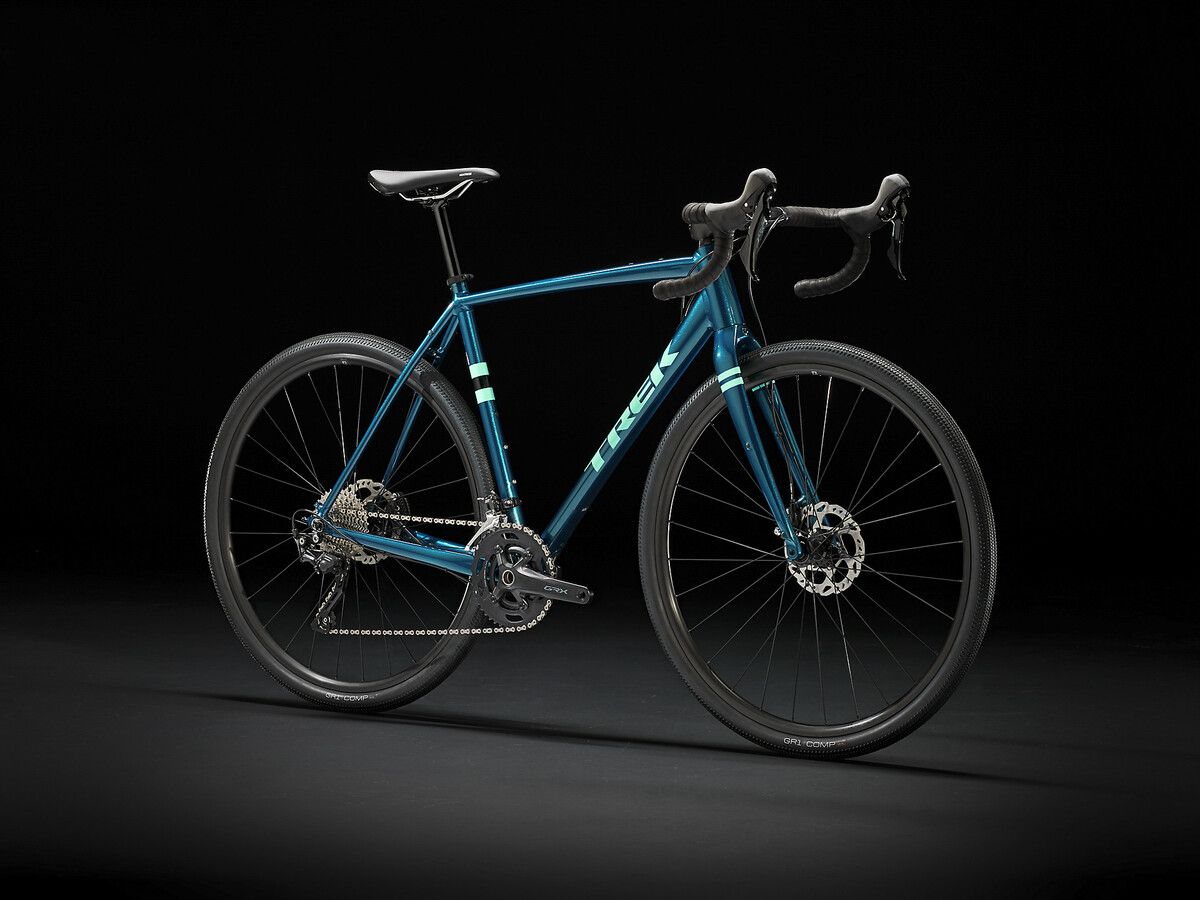 It's now down to the colour. I can't decide between the two - I love both!

Which do you all prefer?

Red was my first choice but now I'm torn:

From Madone to Checkpoint is a bit like going into a car show room to look at a 'sports car' then buying an 'SUV'; the latter may well be the more valid choice.

Of course you need to work out what is the more valid choice, in your opening post you asked "unless anyone has any other recommendations I should consider", so to repeat what vickster asked " What are you planning to use it for?" it's far more valid to recommend other considerations when readers know the answer to that Distorted Vision.
Last edited: 15 Nov 2020
G

Distorted Vision said:
Was about to pull the trigger on the Trek Madone SLR7 but my wife won't let me spend so much on a bike. She has said I can spend no more than £1800 so I'm now considering this gravel bike.
Click to expand...

Does she really need to know cost, as long as they look the similar colour

I keep on looking at a new 2021 Emonda SLR 6, but every time I go out on my 2011 Madone 3.1 I'm amazed how good it feels. A brand new version am sure would be even better but am not convinced it'll be £3-4-5k better, the limitation ultimately isn't the bike, its my legs.

So in your position I think you are fully justified to spend as much as you like, after all the bike is likely to last you for 10 years+ so in a way its a good 'investment' to spend more now so you can enjoy it for years to come......Apart from my wife I honestly struggle to think of anything else in my life from 2011 that still gives me so much enjoyment 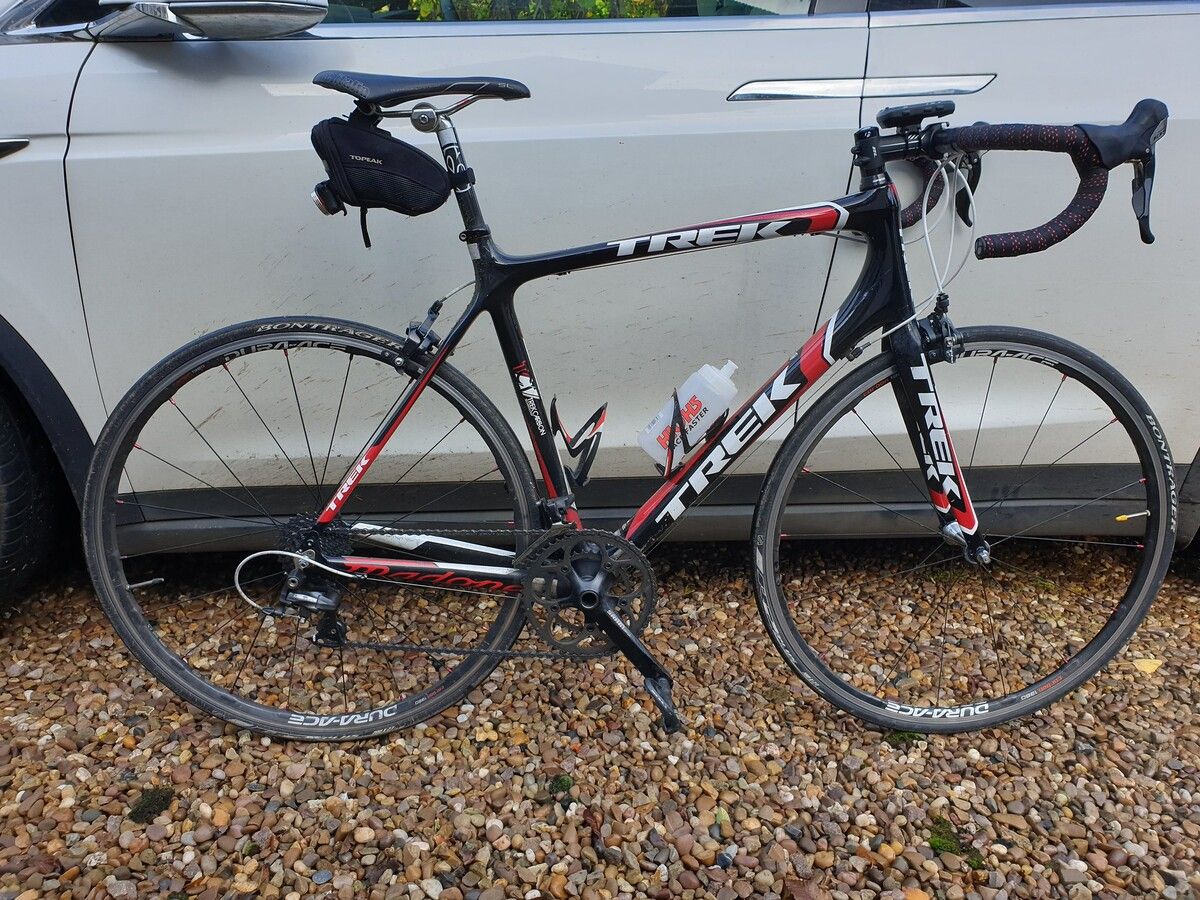 Despite my love for my 2011 Trek, I still cannot help lust after one of these.......It would have to be in the same colour scheme as my current bike though to ensure no one notices any change

Do you really know what you are buying. You've gone from a plus £6k race bike to a much cheaper cross bike - completely different bikes, not just in terms of money, but purpose.

If you want a good cross/gravel bike, I'd look at the On-One Space Chicken or Free Ranger - cheaper, same or better groupsets and Carbon, not alloy.

£6k and Ultegra - bloody hell, I'd be expecting Dura Ace for that.
OP

It's a fair point. I've decided against a gravel bike altogether and weighing up two other bikes. I've started another thread:

It's all a matter of opinion though isn't it?
I'm sure whatever style/type of bike you prefer others won't, what is your ideal bike as a matter of interest?
S

shep said:
what is your ideal bike as a matter of interest?
Click to expand...

SkipdiverJohn said:
No boring matt black or greys. No huge garish frame decals. Normal alloy wheels with a sensible number of spokes. No ugly disc brakes, no ugly deep carbon aero rims, no brand decals plastered all over the wheels.
Click to expand...

That's the opinion thing kicking in again you see, me personally I wouldn't want to ride something that I had in the 70's ( I had a kalkhoff coupe du monde when I was 15) but truly understand people's attraction for them.

Difference being when someone asks for opinions on certain models then just because they hold no interest to you then you aren't really adding anything to the discussion are you?

It's like if you wanted to know about the type of bike you favour and I went on about them being old, heavy, outdated etc, I'd come over as a right Pr*ck!

Agree with you on the Matt Black and Greys though.

But hey, we all know what opinions are like.

shep said:
That's the opinion thing kicking in again you see, me personally I wouldn't want to ride something that I had in the 70's ( I had a kalkhoff coupe du monde when I was 15) but truly understand people's attraction for them.

Difference being when someone asks for opinions on certain models then just because they hold no interest to you then you aren't really adding anything to the discussion are you?

It's like if you wanted to know about the type of bike you favour and I went on about them being old, heavy, outdated etc, I'd come over as a right Pr*ck!

Agree with you on the Matt Black and Greys though.

But hey, we all know what opinions are like.

Couldn’t agree more. I would also hazard a guess that some prefer bikes from era they grew up in same as liking music from our youth. Not everyone grew up in the 70’s and drooled for a steel framed, narrow tubed, bike. Many grew up in the Carbon and Aluminium era’s drooling over Madone‘s and Titanium now.... They have no attachment to the 70’s iron. and that’s fair enough. But still some feel the need to spew crap to justify their choices.
OP

Wasn't considering buying second hand but tempted by this: 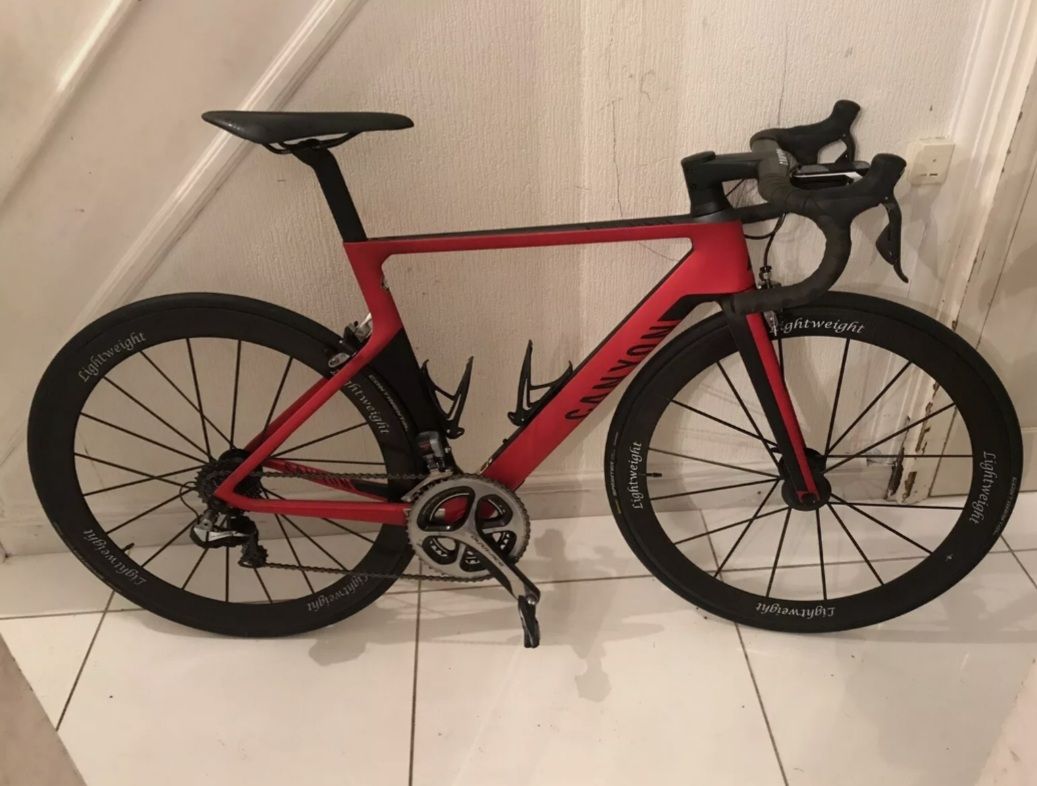 Those Lightweight Millenstein Obermayer wheels are uber expensive, no? The seller says he owns 5 bikes and it was bought Christmas 2017 and only done 500 miles.

Proof of purchase ? Proof of ownership ? I am very wary of buying expensive bikes off ebay
You must log in or register to reply here.
Similar threads