Just finished my club ride this morning and riding home, down Marford hill.
About 5% so doing about 30mph, always fun as it's a terrible surface and drivers do insist on trying to get past even though it's double white line and a 30mph limit.

Anyway, suddenly hear a big bang and my rear wheel is locked. Cue lots of back wheel sliding as I try to control it and stop, and end up on the other side of the road.

Believe me skidding to a stop from 30 isn't fun.

Anyway it turns out my mini tool box attached to my seat post had snapped and dropped between the frame and the back wheel.

Luckily the box was less robust than either so melted a chunk away.

Unjammed it and checked and the tyre and frame are unhurt, unlike the box.

Be careful out there folks 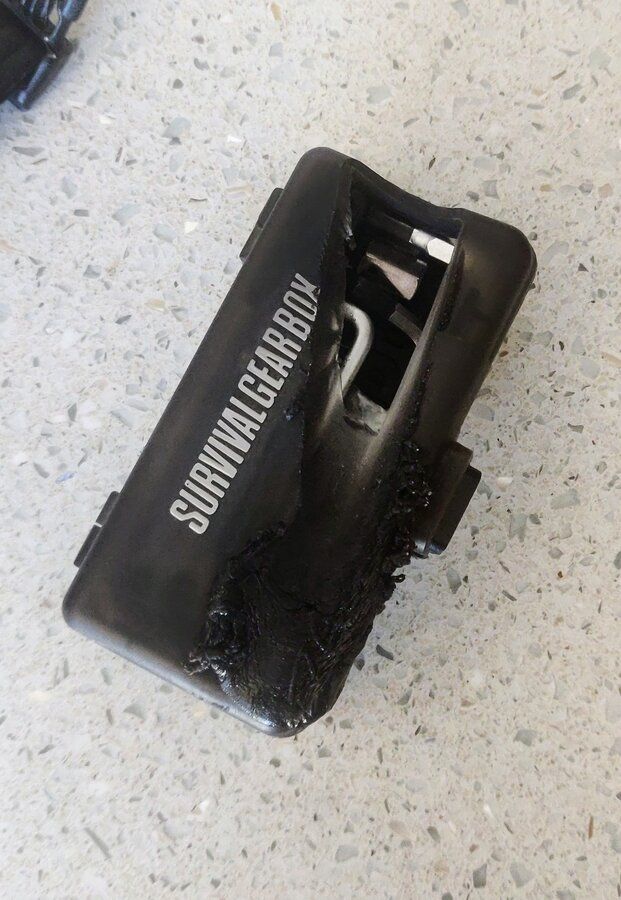 You're lucky it's a Survival Gearbox or you might not have done!

At least you won't have to worry about constipation for a few days.

Smokin Joe said:
At least you won't have to worry about constipation for a few days.
Click to expand...

If that aint cured it theres something wrong.

Had a similar experience on a loan bike whilst on holiday in Devon, me and my mate being bored and aged about 12/13, decided to leave the campsite and use the bikes to hit the bright lights of Totnes, so off we went , and as usual it turned into a race, as bike rides usually did at home, on the first hill descent we couldn't stop and sent the local hunt's hounds scattering to to the four winds, whilst yelling we couldn't stop, climbed the next hill, down the next descent where the rear mudguard on mine came loose and became tightly rolled between the rear brake and tyre like a Swiss roll, locking it solid, after that was extracted, and chucked in the hedge, we got to our destination, when we got back we sneaked the bikes back, as by now the brake blocks were worn away to nothing, one was minus a mudguard, with a huge flat spot on the rear tyre, the site owner was heard the following day telling someone the bikes are no longer available as some bloody hooligans had wrecked them,

I don't know how we rode them up the hills as they were really old, sit up and beg things, probably from the 1950's or 60's and weighed a ton.
You must log in or register to reply here.
Similar threads