What tubing did Harry Quinn use on basic models?

1978 frame, 23.5", just under 4lb 12oz for the bare frame, so there is at least some butted tubing in there - full 531DB in this size would be about 4lb 8oz and I have a smaller straight gauge 531 frame that is comfortably over 5lb. Seat post is 27.0. I'm thinking it's either a 531 mix (Super Tourist seat tube?) or Tange Champion, which was certainly used on later Quinns under Clements ownership.

The frame is very well mitred and brazed but fairly basic spec, with a seamed BB shell and Dawes-style flattened top eyes. The fork was JIS (I've recut it to ISO) so obviously bought in and not made by HQ. Both f&f are numbered Q4694.

Anyone familiar with the make?

If its a Q stamp made from an O and an L then it's one of Harry's finest. Not like Quinn to buy in frames in those days.

It's not on the Quinn frame number registry but would tie in with 1978. Mercian made a cheaper stock frame (the campionissimo I think ) but can't think that Harry Quinn did.
S

rogerzilla said:
1978 frame, 23.5", just under 4lb 12oz for the bare frame, so there is at least some butted tubing in there - full 531DB in this size would be about 4lb 8oz and I have a smaller straight gauge 531 frame that is comfortably over 5lb.
Click to expand...

Going slightly OT, when you say bare, are you weighing a truly bare frame & forks which has had the BB stripped out?
A few months ago I acquired an old-school 5 speed with no badges or decals, just a serial number. The wheels were scrap so I binned them and took off all the mechanicals. The 23" frame strikes me as lighter with the BB and seatpost still in, than a 20 1/2" womens Raleigh Pioneer hi-tensile frame with no seatpost or BB fitted! Although the dropouts aren't anything special, and the lugs aren't super-fancy either, I'm wondering if there's some 531 in there as it seems very light for it's size.

The weight is for a bare frame (no forks). When I say bare, I mean bare - no headset, no BB, no seatpost, no seatbolt, no dropout adjusters. The BB cable guides are brazed on, though, so they're included.

The Q is made from a 0 and 1. I have an older Harry Quinn track bike (Q2388) and the stamping of the Q is the same. I think only the fork was bought in and the frame was built by Harry (or Terry Dolan, or one of his other builders). A lot of builders bought forks in for their less prestigious frames, because it's cheaper to buy one ready-made. My Bob Griffin has a 26tpi Raleigh fork, which is a bit of an annoyance.

I found one on LFGSS that looks exactly the same (lugs, top eyes, lining, that bought-in fork), except mine has longer road ends:

That one's stickered as 531 but mine has no tubing decal. Some HQ frames just had "handbuilt by Harry Quinn" in place of a tubing decal and some had nothing. The nature of the rust patches makes me think mang-moly (531) rather than chromoly (Champion); chromoly is quite rust resistant, judging from old unloved Konas I've rescued.

Mine is going to Argos for a refurb though - it was apparently sat in a barn for most of the last 40 years. Dry enough for the seatpost and stem to be unseized, thank goodness.
Last edited: 25 Aug 2018

Appears to be an unlisted number,
http://classicrendezvous.com/British_isles/Harry_Quinn/HQuinn_registry.htm
OP
OP

That registry depends on owners emailing details. It probably covers less than 1% of Quinns!
S

I need to get some accurate luggage scales and have a proper weigh-up of the various bike frames I own. A fisherman's spring balance is OK for a whole bike, but not accurate enough for a frame.

rogerzilla said:
That registry depends on owners emailing details. It probably covers less than 1% of Quinns!
Click to expand...

Assuming the numbers increased every year, yours would be around 79.
Is the frame similar to the other Q4,000 number? 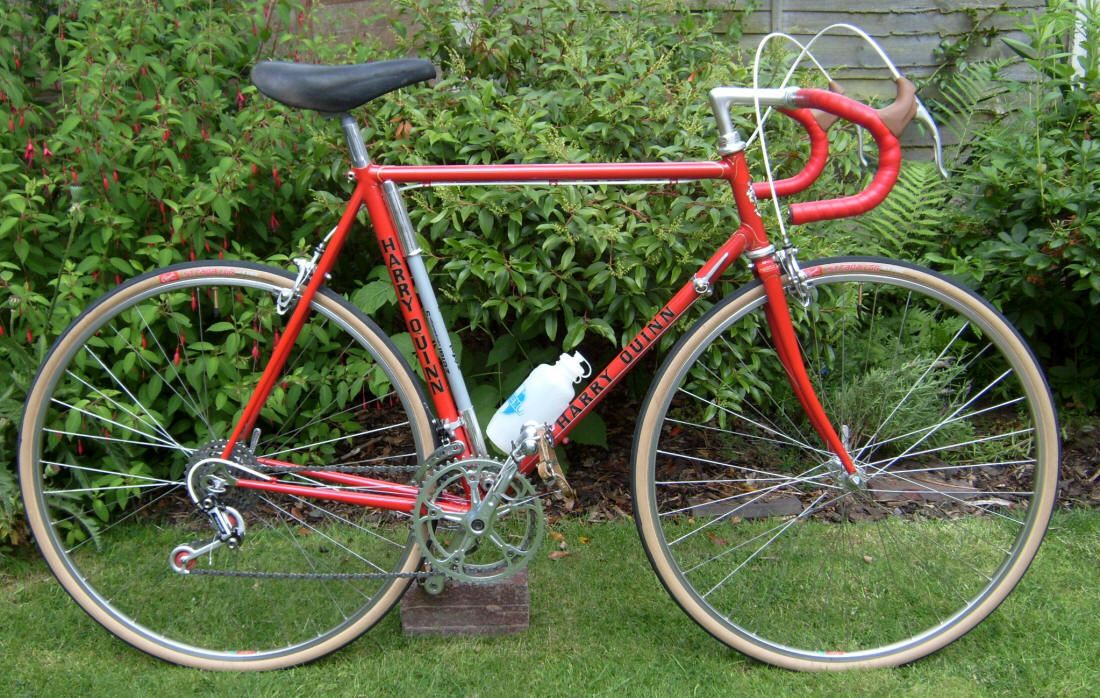 Walton Road badge (my dad grew up half a mile away!)

Nice workmanship there, I'd be surprised if at least the main tubes aren't 531. Seems a bit of a waste of skill building such a good looking frame out of gas pipe, can't see that having happened here.
I won't be holding my breath waiting for someone to design a robot that could build that better than a human...
OP
OP

It definitely has butted tubing in it: the usual rule of thumb for a medium 531DB frame without forks is 4 1/2 lb, and a plain gauge 531 frame is over 5lb. My best guess is that it's 531DB but with an ST top tube and seat tube, possibly for a heavy rider. That would come out between 4 1/2 and 5lb.
S

When you say medium are you referring to the frame size or meaning "medium" gauge 531, i.e. not heavy duty ST or the extra thin wall competition spec stuff?
You must log in or register to reply here.