I bought this frame thinking that it would be a simple quick build using some of my existing spare parts and some borrowed from my other bikes.
The frame is made from Reynolds 531butted frame tubes and is 23 1/2 inches. I couldn't find much about them on the internet apart fit seems as they were sold as frame only.
I particularly liked the metallic blue colour, but I'm not keen on the style of graphics used. They remind me of neon advertising signs. It must have been the style for that period as Falcon seem to have used a similar style .
Once I got the frame home I gave it a good wash and treated some of the rusty areas. I de rusted the rusty area on the right hand chain stay and left hand front fork . I
primed them with self etching primer and touched in the area on the fork . For the chain stay I thought I would make up a protector from a thin sheet of aluminium and
fix it on with some double sided rubber adhesive tape. I thought it would look nice polished. This was the easiest of the metal fabricating bits.
I haven't yet figured why Carlton couldn't be bothered to braze on gear cable guides or brake cable fixings on the crossbar. These items turned out to be a right pain to
make as I was going to use some thin stainless steel from an old kettle. I wasn't going to pay over the odds for some rusty old chrome ones . I cut the shapes out of
thin card first of all and then transferred the corrected shapes to the steel . My tinsnips managed to cut the steel, but the drilling and filing was a right pain .
Fitting components to the frame was the next thing. I thought some Campag brakes would look nice, so I popped a pair on . Next were the wheels, 700 or 27 inch ?
The 700's were miles away. Must be 27's I thought! They looked fine until I fitted the brake blocks. I think the brakes should work on the rims and not the tyre!

I tried a pair of period short reach Weinmanns which were fine on the front but for the rear I had to use a 730 long reach side pulls .
The rear wheel has a 5 speed freewheel at the moment and I fitted a Campag Mirage 8 speed rear mech. I found that the stop screw wasn't long enough from stopping
the mech from going into the spokes when it was screwed in fully . I found that by removing the spring from the screw it allowed the screw to be screwed in enough to
prevent the mech from fouling .
I was curious to know how the frame compared with some of my other bikes. I placed it next to my Carlton Competition and discovered that it has a shorter
wheelbase. It matches my Falcon Club Special.
Yesterday I decided to try to get the bike ready for it's first ride . I went out and bought some brake cable outer sleeve and gear cable and fitted them . It was time for
my first trial ride.
The first ride was rather short. Rear tyre was a bit flat . The second lasted a bit longer until the left pedal started feeling strange ! The crank fell off! I picked up the crank arm, found the nut and cycled back home . With things tightened up I set off for the third time . I did 5 miles.
I expected the ride to be a bit twitchy due to the short wheelbase, but that wasn't the case . It felt agile and a bit tall. It might just be my first impression . What I did notice was that it wasn't as twitchy as my other bikes when I looked over my shoulder. More test rides are needed.
Today I was trying to finish off making the cable clamps. Cable ties are handy but not as pleasing to look at. I need to cut the screw threads to length . 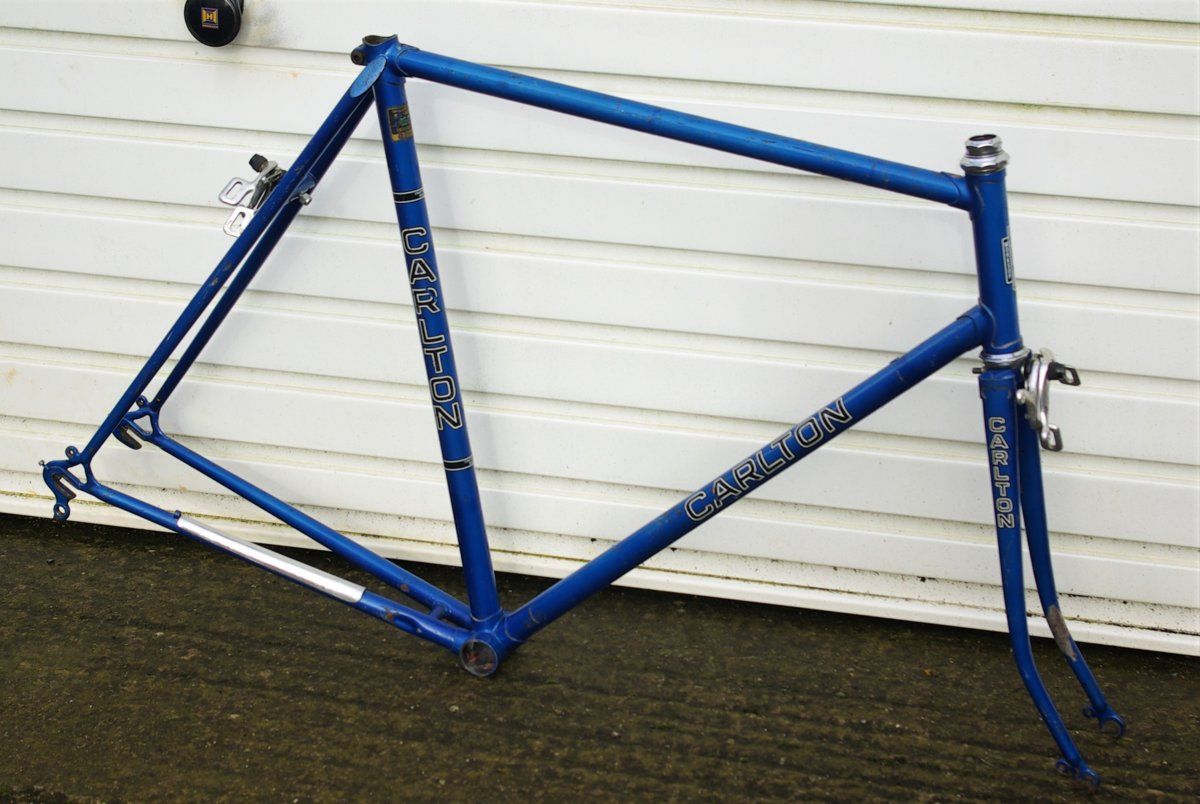 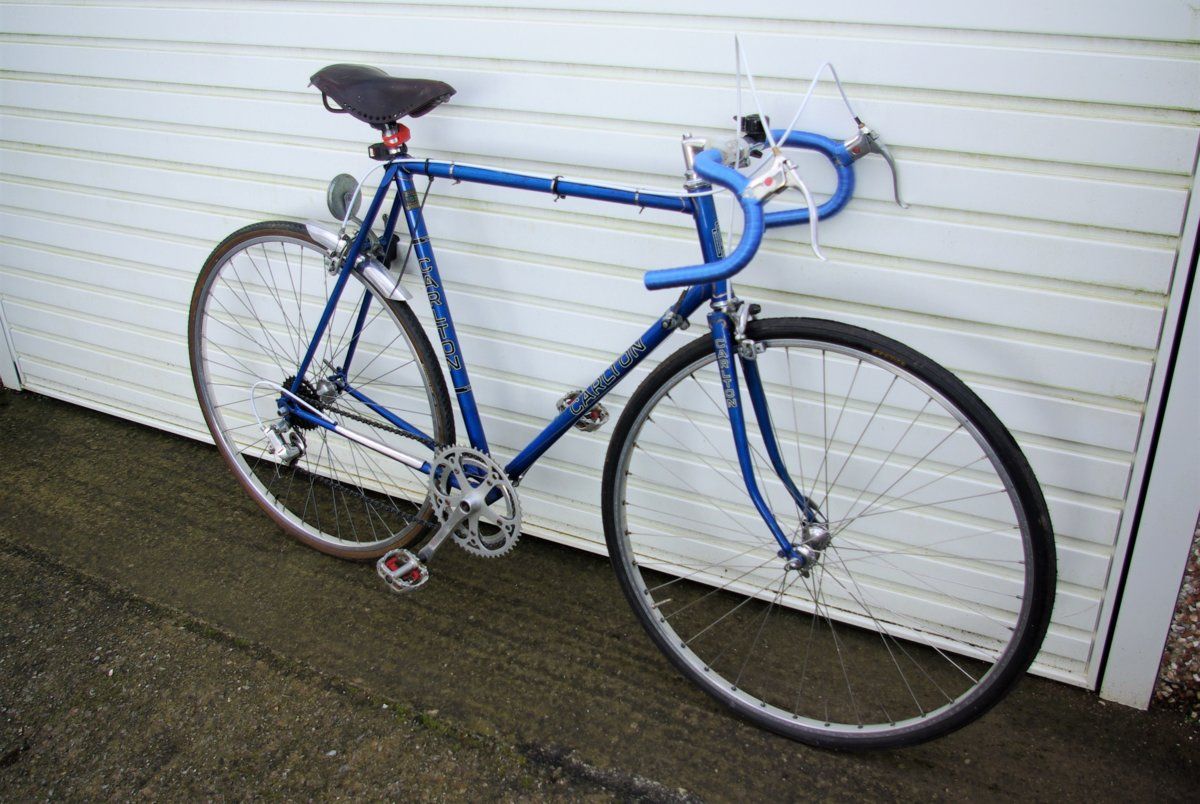 . The graphics mimic the style of the Professional frame which it was the lower cost sibling. The official excuse for lack of braze ons was to allow the fitting of more campag kit. In reality is was to knock a few Bob off the cost of making it.

Its tea time so will be back later

Very nice. The wheelbase doesn't look too short to me.
OP

Cycleops said:
Very nice. The wheelbase doesn't look too short to me.
Click to expand...

The wheelbase looks about an inch shorter than my Competition. That is by placing them side by side. Both frames are 23 1/2.
The original pictures of the frame made it look more like a 25 inch as the head tube looked really long. This must have been an optical illusion as it is the same size as my other 23 1/2 bikes .
I will have to get a tape measure out and compare dimensions .

Clubman was a sort of jack of all trades...... Mudguards off it could be raced, fixed gear and guards winter bike, gears and guards a Sunday club run bike and with a saddlebag and bonk bag a lightweight demi course

The earlier clubman with nevex lugs came in Eau de Nil....... Marmite colour if ever there was one l.
OP

I will have to wait until Dennis has gone before I take it out again .
OP

midlife said:
The earlier clubman with nevex lugs came in Eau de Nil....... Marmite colour if ever there was one l.
Click to expand...

I see that there is one on the net from the same year as mine but in candy red with box lining .

Illaveago said:
I see that there is one on the net from the same year as mine but in candy red with box lining .
Click to expand...

There was deffo a red one as I remember, same as yours with the block decals and Carlton decal down the forks but never any box lining.

https://images.app.goo.gl/9YcryDkdqJisijc7A
Here it is . The link that is

Chrome on a clubman?

Was meant to be a budget but classy frame. Chrome by then was expensive. Not sure what what that is? Later 80's decals.. But over BB cables.

Have man flu / covid / cold so off to bed. Work said I was plenty well enough to put in a full day

midlife said:
Chrome on a clubman?

Was meant to be a budget but classy frame. Chrome by then was expensive. Not sure what what that is? Later 80's decals.. But over BB cables.

Have man flu / covid / cold so off to bed. Work said I was plenty well enough to put in a full day

Take care .
The frame has similarities. The lugs have the heart shaped cut outs , the rear dropouts are forged and have the screws fitted . The fork crown looks different and it has a metal head badge .

I'm not sure if the wheelbase is different from my other bikes now ! I did a quick comparison with another bike this morning and they were the same.

I will have to do more a detailed comparison another day .
I took my bike out for another 5 mile ride today . It does feel more stable than my other bikes and the rear feels more stiff allowing me to put some power into the rear wheel . I'm liking the bike more as I do some more miles on it .
You must log in or register to reply here.
Share:
Facebook Twitter Reddit Pinterest Tumblr WhatsApp Email Link
Top Bottom