The bike from Halfords was cheap £175, however it did what I wanted, to get out with camera so exercise and ability to stop anywhere to take pictures.

However first time brakes had a problem, really caught me out, they had been so good, then came to anchor on and only slowed me down gently no matter how hard I pulled on leaver, so inspection found same system as some tractors where two plates with tapered groves with ball bearings counter rotate so ball bearing forces them to expand, however thickness of ball bearing is the maximum, so no amount of pulling on lever will open them further.

This means as you ride day to day the brakes so no sign of being out of adjustment they work fine for normal slowing, but anchor on and there is simply no more.

Had it coming down Symonds Yat could slow down but not stop, quite frighting, burnt fingers when trying to adjust when I did stop, and disc went blue. After this was careful to adjust on regular basis, then the disc actually popped out, two bike shops in Shotton, neither had replacement, Halfords in Chester had to order them in, easy enough to replace, and I now have a spare set, however not so keen on disk brakes now, and see no real guide as to when they should be replaced, clearly before they pop out, but can't see any guide as to when wear is too much.

I don't know if hydraulic are better, I would assume less of a problem with adjustment? but can they pop out? Pads are Clarks VX 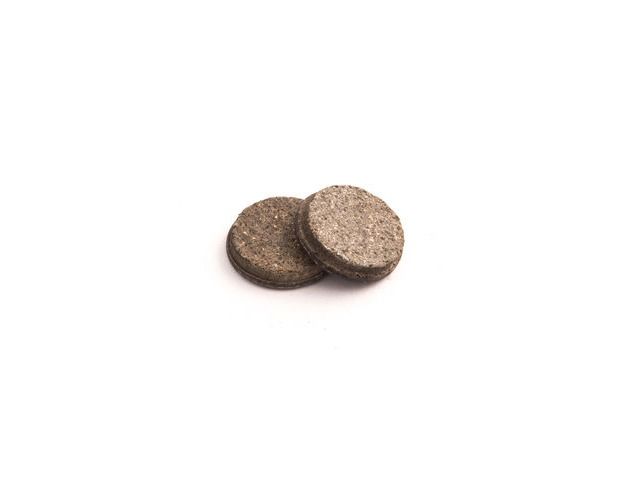 no tag on them, Halfords guy had a problem finding them, most seem to had a tag on them, and it seems with tag still called VX these are VX840C it seems the C is important.

Not much I can do, stuck with them, and just have to be careful, wonder if there is an actual instruction manual?
Last edited: 11 Apr 2019

Cycleops said:
I'll have to get one of those cheap Halfords bikes if they slow you down with a genital

Not a fan of mechanical discs to be honest. I've had 2 bikes with Avid BB5's which are decent enough and when new they are great but I found pad wear, need for constant fettling etc not really worth the benefits

I've switched back to rim brakes and decent pads.

There are cheap hydraulic discs out there but I'd beware. In particular I've had issues with C-star branded units suffering seal failure under hard braking

Avid BB7s seem very good on two bikes I have. But TRP Spyres are the nutt’s muts.

I would not even contemplate hydraulic brakes on a £175 bike.

YukonBoy said:
I would not even contemplate hydraulic brakes on a £175 bike.
Click to expand...

It could double the price...

Heltor Chasca said:
It could double the price...
Click to expand...

So could an anchor you throw out behind you.

Heltor Chasca said:
Avid BB7s seem very good on two bikes I have. But TRP Spyres are the nutt’s muts.
Click to expand...

I had to get rid of mine as they couldn't handle a Scottish winter without the pistons seizing.

My son swapped the cable to hydraulic on his bike, and gave me his old ones, however the mounting is completely different. Also must get a better spell checker missed that error. In the main I use a hybrid bike well more a road bike, the mountain bike is not used very much, however with the mountain bike I can wheel it on rear wheel through kissing gates, and the wider tyres mean less likely to side slip on canal tow paths and the like. You can get very wet if you fall off on the canal tow path, not done it yet and don't want to.

Cycling from home one selects best bike for trip, however on holiday you have to select one, and I am very aware theft from outside the caravan is easy, as it is outside a shop, and best anti theft is for your bike to look the worst around. Bike locks are great when there is some thing to lock it to, but just around the wheel may deter enough with cheap bike, but not an expensive one.

However the brake failure was unexpected, as was the problem getting replacement pads, mother bought me the bike, one of the last things see bought me, so no intention of swapping it, however neither am I going to spend anything to upgrade it.

However main reason for post is to warn others, there was nothing with the bike which explained the difference between disc and calliper brakes, there were loads of warnings about not removing the front reflector where the wire can other wise fall on the tyre and propel one over the handle bars, but not seen any warnings about disc brakes failing, same with brake blocks wrong way around and popping out, loads of warnings, seem to remember it even came up in the cycling proficiency test, is that still going?

But not seen any warning about disc brake failure, I do wonder, if my disc went blue, would hydraulic seals take that temperature? I guess so, as seen Bedford RL wagons with the brake drums glowing red, and they were air over hydraulic so still had a cylinder, but maybe not so close to hot parts.

But with old brakes they would give you a indication before they fail, you can easy see brake block wear, and with cars there is often a warning light, and even without the metal on metal as pad is completely warn away makes a sound that tells you there is some thing wrong. I have had a bike with 4 brakes, but without two handle bars hard to do. Always wondered why the tandem had larger drum at rear, when most of braking done on front?

Another vote for Spyres here.

I bought a Genesis Day One with mechanical cable brakes. I swapped the setup to Shimano hydraulic, an instant improvement. I couldn't make the rear lock with cable but no problems locking either wheel with hydraulic. Plus the feather touch modulation is so nice to control the braking level.
M

My Shimano cable disc brakes have been totally reliable and rarely need adjusting. Maybe your brake design was too complex for cheap manufacture.

A friend has had Clark’s CMD 21 mech disc’s for awhile now he’s on his second set of pads, no issues as far I know apart from when he first got them they suffered with fade until he cleaned them with brake cleaner (for a car) they where cheap too.
Last edited: 19 Apr 2019

Thats wonderful
You must log in or register to reply here.
Similar threads