Whilst clearing out junk from my parents house the other day I was looking through loads of old photos of unknown people and long-dead relatives when I came across this fantastic picture. 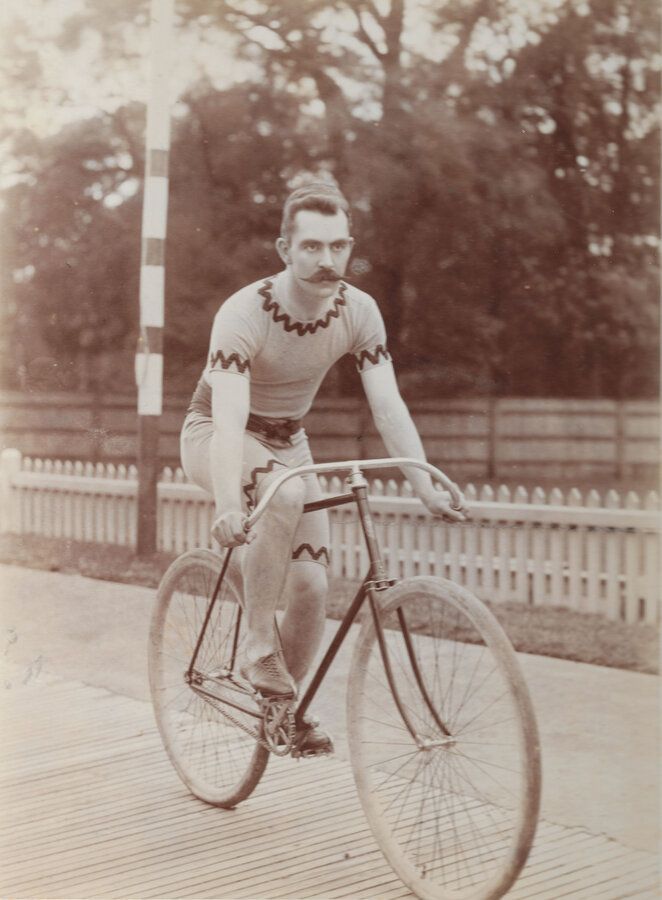 I love the way his moustache is the same profile as his handlebars.

According to my mother this was her great-uncle Jack.
After further guddling around in the photo drawer I found another photo, this time stoking a tandem trike - 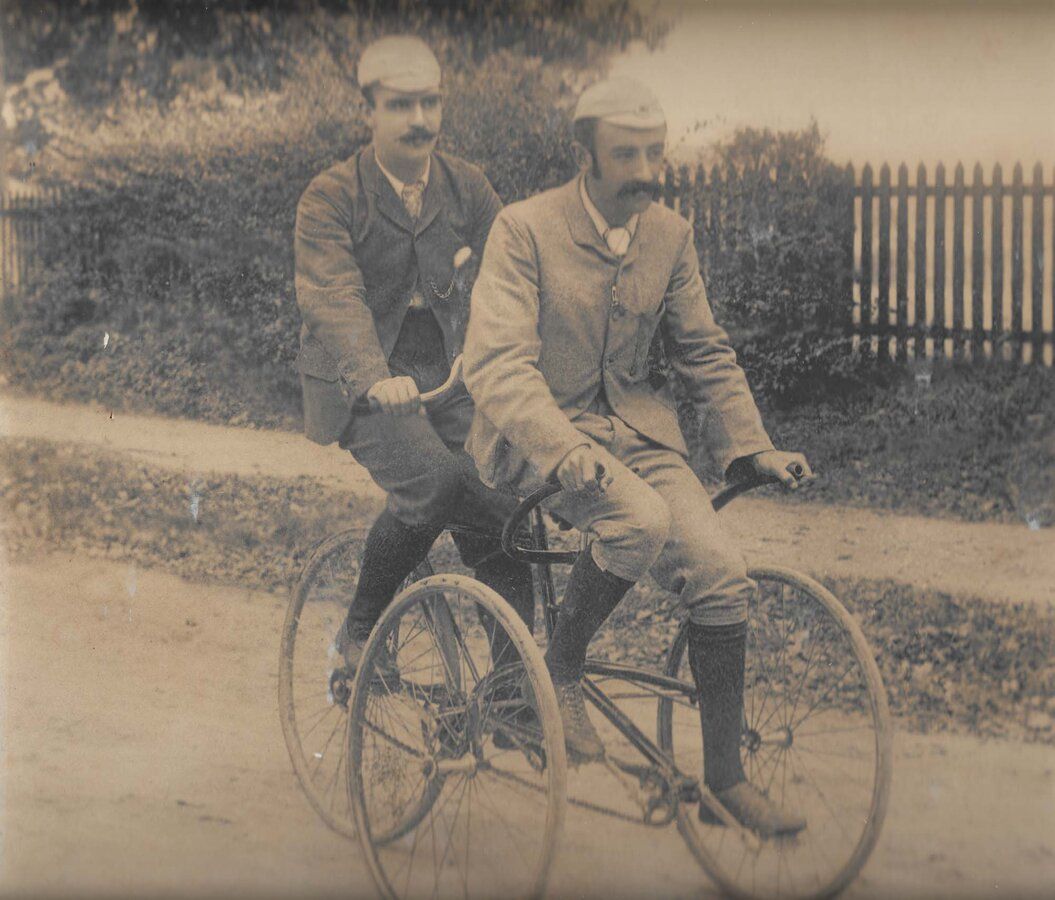 ... and some other paraphernalia including an excerpt from Bicycling News, Uncle Jack on the right - 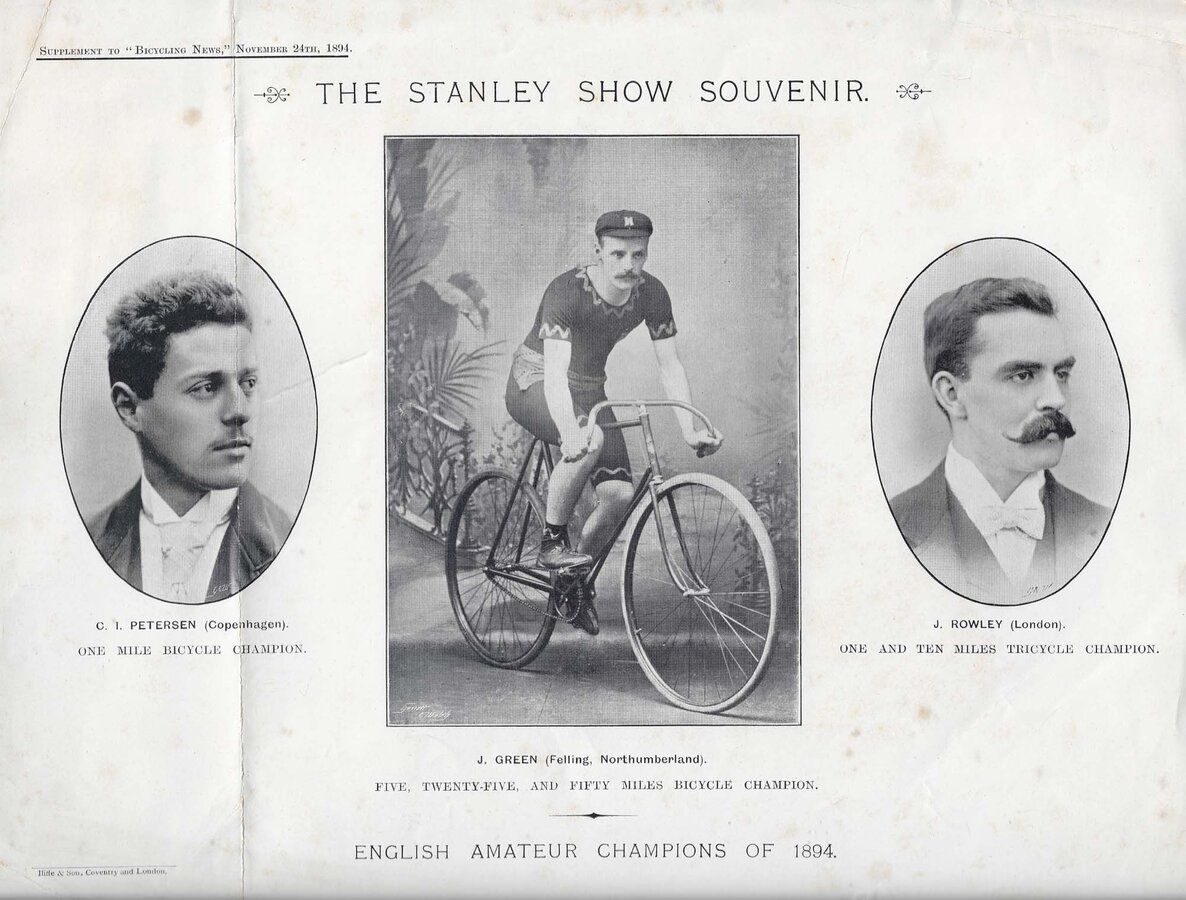 ... and a very tatty dog-eared copy of 'The Strand' magazine of 1894. Great - great - Uncle Jack is one of their Athletes of the Year. 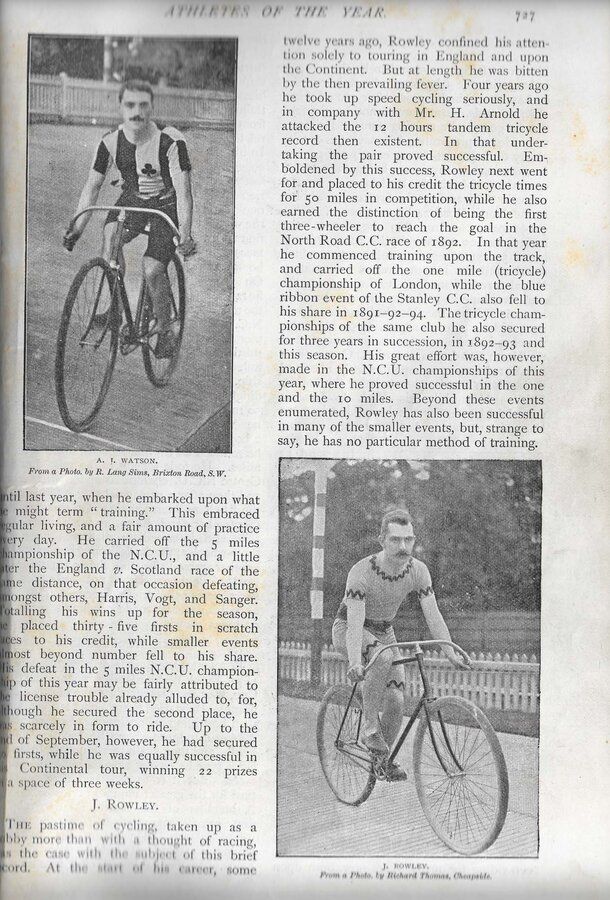 There was also a clipping from a newspaper, unfortunately just the column so I've no idea of which paper or when it was published, though must have been late 50s. It hasn't scanned well but this is a transcript-

Mr Rowley (94), who won many awards as a cyclist, including all-England championship trophies, still speaks spiritedly about a unique journey which he and two school friends made in the Alps on penny-farthing bicycles.

“My machine had a big wheel 54in high and had a ‘spoon’ brake which pressed on the solid tyre,” he recalls.

“I was about 17 and we cycled across France and Switzerland and then from one end of the Alps to the other. We averaged 60 miles a day. I used to coast downhill, putting my legs over the handlebars.”

Mr Rowley, who cycled in every European country and Russia, won two all-England championships four years in succession, and in 1894 gave the two magnificent silver trophies he received for these achievements to Bentley Heath Cricket Club.

A member of that august body, the Fellowship of Old Time Cyclists, Mr Rowley also remembers how his brother, the late Mr Frank Rowley, used to ride on Christmas Day from Ganwick Corner to Hadley Wood Golf Club on a “bone shaker” bicycle. His friends used to wager against his completing the journey without dismounting.

Do any other CCers have a cycling champion in their family's dim and distant past, or any photos of vintage cyclist relatives?


Mr Celine said:
“I was about 17 and we cycled across France and Switzerland and then from one end of the Alps to the other. We averaged 60 miles a day. I used to coast downhill, putting my legs over the handlebars.”
Click to expand...

On solid tyres, unsealed roads and sitting on top of a 54" wheel.

He lived to at least 94. Who says cycling is dangerous!

What a find!
I am so envious of that moustache. I only have to walk in a light breeze for any attempt at sweeping whiskers to vanish: no amount of wax seems to work, especially not on a bike.
Thanks for sharing these and what a wonderful story.

Mr Celine said:
“I was about 17 and we cycled across France and Switzerland and then from one end of the Alps to the other. We averaged 60 miles a day. I used to coast downhill, putting my legs over the handlebars.”
Click to expand...

That was the recognised way of ensuring that, if you came off, you landed feet-first rather than head-first (an imperial crowner).

Fantastic stuff
You must log in or register to reply here.
Similar threads