Cycling kit from the past you used to use

I spotted this Pifco lamp on Ebay and yep, I had one. If I recall, the brightness varied with the bumps in the road, a really big bump would light up 10 feet ahead for a few seconds, the rest of the time it was at geriatric firefly levels. I think it met it's end when I hit a very big pothole and the top burst off and the lens fell out the front.

I also had more than a few sets of these. The front one regularly jumped off the bracket and the rear one tended to come apart just leaving the main case on your bike but no batteries or reflector. It was a weeks paper round to replace them. 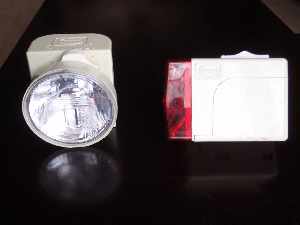 They were rubbish. The Ever Ready ones they were a copy of (which were more expensive) were much more robust. (The turny-switch on the top was particularly crap, I seem to remember...really flimsy.)

I did have this sort of set up on one bike. Stop and you're in the dark. 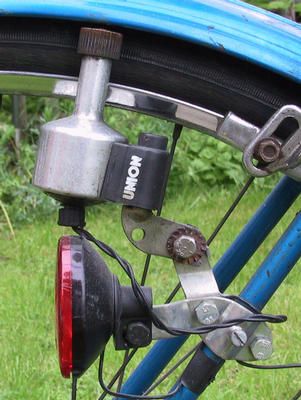 One of these was my first 'proper' bike, a Carlton Stadium. It was a Xmas present and I'd asked for a Raleigh Arena and had been upgraded to a Carlton.

At a jumble sale when I was younger I picked up one of those cube like rear lights, I think it took Double D batteries but it was massive and weighed a bit. It would have been about half the size of a full size football and I had no mount so it never actually got fitted but I was proud of it.

Also had one of the Pifco lamps. It took a weird multi-cell battery with one connector on the front contacting the bulb and the other on top to be connected with the screw. The circuit was partly through the casing and relied on the lid being a tight fit - it never was!!!

The Ever-ready front/rearguard was a quantum leap. It's capacity for self dismantling (and vulnerability to theft) could be greatly reduced by cunningly fitted grubscrews. Stil have a set in the spares box.

Off at a tangent, does anyone remember those little multicoloured brushes that sat in the hub and kept it clean and shiny? Can you still get them?

I used to use a puncture repair outfit until I discovered SMPs.
B

I quite miss the old lamp brackets. They may not have been brilliant, but the handlebar-mounted stuff which replaced them was much, much worse. Those old multi-cell batteries are back in production now, though I can't imagine who uses them. I converted my dad's old lamp to run on two 'D' cells, and it's probably still knocking around somewhere.

I disliked the Ever-Ready Nightrider lights which replaced them, partly because the handlebar bracket struck an ideal balance between being too fiddly to remove quickly, yet easily stolen. Also, the sheer weight of those 'D' cells caused the light to dip however hard you tightened the screw, and partly on aesthetic grounds.

Bromptonaut said:
Off at a tangent, does anyone remember those little multicoloured brushes that sat in the hub and kept it clean and shiny? Can you still get them?
Click to expand...

My wifes bike still has them on the hubs, and they are still working after 20 years and many thousands of miles

If you could find a real old fashoned tobacconists shop, the sort that sell cigars and pipes I'm sure you could still get pipecleaners

Beardie said:
I quite miss the old lamp brackets.
Click to expand...

I had one (can't find a picture of it though) that clamped around the fork with bolts/nuts... needless to say, one day it came loose, light swung into front wheel spokes, front wheel stopped dead and I went over the top, landing on my back with bike on top of me... oof! This was bout 30 yrs ago!

It's amazing any of us survived really. The most basic things used to be *sooooo* crap.

Did anyone use flint catchers?

Wonder lights? Jeez, it was a wonder I didn't get run over. Oh I did.
Michelin 'puncture prone' World Tour tyres.

bikie said:
Did anyone use flint catchers?
Click to expand...

Brains said:
They were Pipecleaners.

My wifes bike still has them on the hubs, and they are still working after 20 years and many thousands of miles

If you could find a real old fashoned tobacconists shop, the sort that sell cigars and pipes I'm sure you could still get pipecleaners
Click to expand...

A bushy pipecleaner might be a substitute but the things I have in mind were sold through bike shops specifically for hubs. Like a small bottle brush it had a short flexible 'tail' which was pushes through a loop at the other end and wound to form the brush into a circle.
You must log in or register to reply here.

Sayings from the past

Blast from the past

Blast From The Past

Friends from the past.