Being tight I like to kid myself into thinking that everything should last forever - well, certainly large, non-wear parts like frames, bars etc.

My next bike will be steel as I don't like ally's predisposition to fatigue failure and get anxious about CFRP's ability to slowly degrade without visible symptoms and catastrophically fail essentially without warning.

On this subject I'm interested to hear / see examples of frame failures you've experienced; preferably those that have crept up on you (rather than resulting from accidents) but anything's welcome - ideally with a bit of info as to the bike's type / brand / age / mileage / history etc.

They probably started at about 4-5k miles and grew slowly to how they are in the pics over maybe another 1000-1500 miles. I didn't notice them for a long time but they did cause the frame to creak on the pedal strokes (which I did notice when it started although initially wrongly diagnosed as a seatpost movement / fit issue): 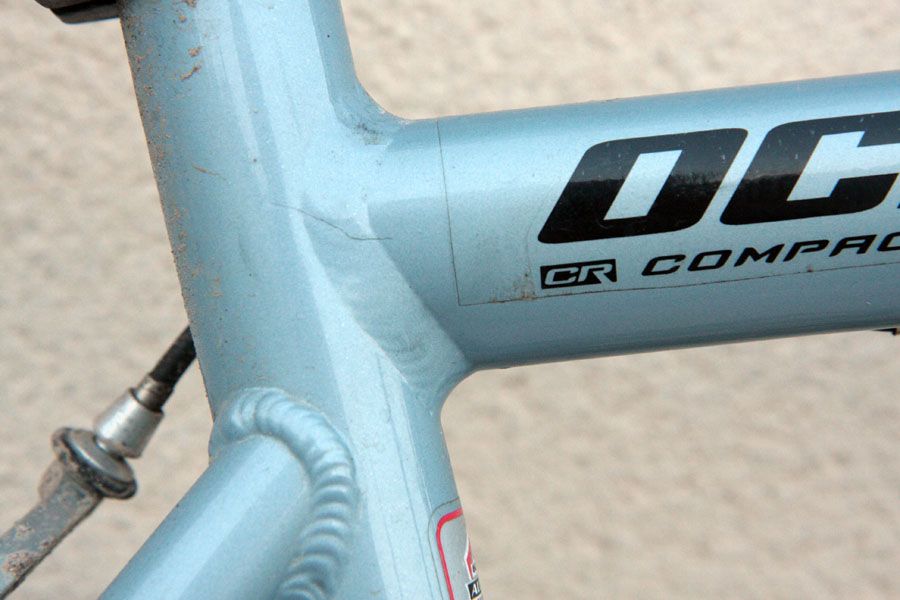 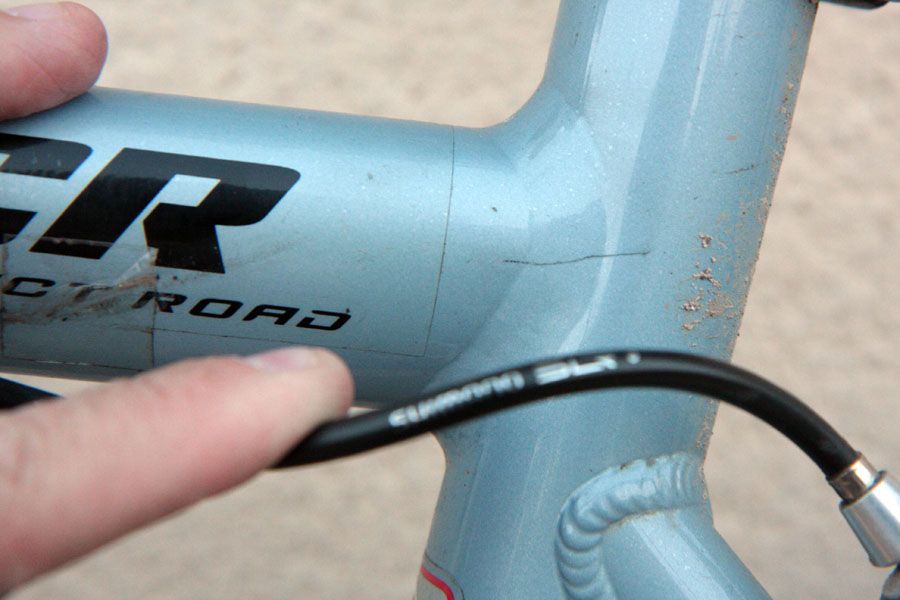 I guess the failure is the result of cyclic, bending loading across the bike as my weight shifted from side to side with each pedal stroke.. starting at the weld due to internal stress concentrations from the welding process.

The seatpost wasn't excessively extended out of the frame, but I do think the problem was potentially exacerbated / even allowed to happen by Giant's stupid use of a short (90mm) plastic insert to allow the use a a 27.2mm OD seatpost inside the (IIRC, and stupidly non-standard) 31.8mm ID frame. IMO if the bike had been fitted with a long seatpost (or insert) that matched the ID of the frame and extended well down inside it would have reduced the loading on the frame and potentially avoided the failure all together.

Drilling the ends of the cracks out arrested their growth for a while (the bike's only been used a shopper / pub bike since and I've kept a close eye on the cracks), but one's cracked again from the leading edge of the hole and is already 6-7mm long after not a lot of riding, so I suspect the end is nigh. I was of half a mind to epoxy in a piece of ally tube down the length of the seatpost tube, but think I'll probably just let the bike die gracefully, strip it and scrap the frame.

I had a chain stay crack and separate on a titanium bike. It had done about 100,000 miles. Nothing dramatic just a bit of noodley frame and creaking were first symptoms. Replaced under lifetime warranty.

Aluminium mtn bike frame went on down tube after about 30,000 miles. Bike retired and components used on other bikes or sold.

You're right to go with steel, more confidence inspiring.
The bird poop welding on the stays on your bike are an offence to my eyes although they have smothed the main tubes.

wafter said:
My next bike will be steel as I don't like ally's predisposition to fatigue failure and get anxious about CFRP's ability to slowly degrade without visible symptoms and catastrophically fail essentially without warning.
Click to expand...

Are you serious? Tell us more.

Never had a frame failure personally, but most of the ones I have seen have been at the tail end of the top tube where long exposed lengths of seat post levers away merrily.

I had a down tube part company with the bottom bracket on my old Raleigh 531 frame.

This one was interesting. 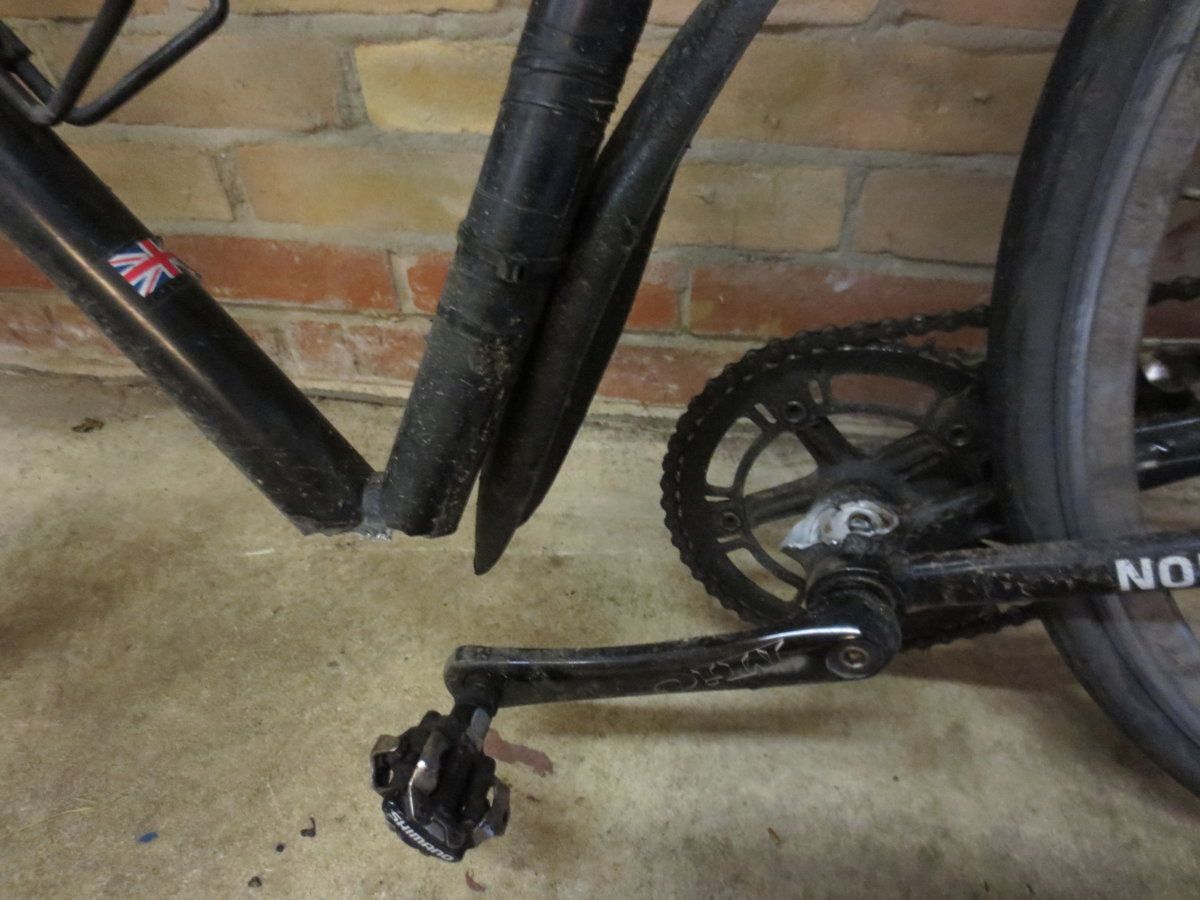 Never ever had a frame fail on me, ever. Must be something certain riders do to their bikes, maybe they are not so smooth in their cycling style or just too heavy for their bikes.

Crosslight evo pro 6- cracked through LH dropout after about 6 month.

Not necessarily in that order. Been through a few.

Never had a frame fail either in all my cycling life.

The front mech bracket on my carbon bike came unrivetted, and when I removed the BB I was alarmed by the amount of loose, powdery stuff that was in there. The frame didn't actually fail, but I was nervous enough that I stopped riding it.
My 531 ST frame, OTOH, is still fine after about 30 years...

I don’t think carbon fibre frames degrade over time and are prone to fail, people shouldn’t peddle this nonsense.

I had a Specialized Tricross (aluminium) crack at the seat post/top tube end. The bike had been creaking for a while, changing saddles and seat posts didn't get rid of the noise, so cleaned the bike to take it to the LBS when I spotted the cracks. I'd done just under 42,000 miles on the bike, was changed for free under warranty.

Unfortunately it was just out of its three year warranty; Kinesis did give me 25% off a new frame which allowed me to afford a Ti Gran Fondo (I loved the Gran Fondo geometry but had doubts over another scandium).

I've had steel frames that rust where the paint gets worn. Chrome ends that rust. One where rust crept through from the inside causing the seat stay to break near the fork end. But I've also had a steel mercian track frame that I bought in 68 and was still racing on it 40 years later.

All four current bikes are alu. All about 10 years old and had no failures. One of them, a focus was in a serious crash and the bars were bent and the rear wheel disintegrated, but the frame and forks were not damaged and am still riding it.
Last edited: 13 Feb 2020
You must log in or register to reply here.
Similar threads