From Road to MTB

Was going to post this in the MTB section but wanted the views of all. I've been into road cycling for a couple of years now and have seen lots of people moving from MTB or hybrid bikes to road bikes...I'm trying to make the decision in the opposite direction.

During the bad weather etc, the cycling has slipped as the road conditions/temperatures have been bad and the turbo (has been used honest) just isn't the same as getting out. We also walked around one of the country parks recently and it has many tracks for mountain bikes and I spent the whole walk figuring out routes off road. Cue the idea of getting a mountain bike.

I've only got a limited budget and have seen a couple of bikes second hand. Looking at hard tails with front suspension fork. At my price range they won't have disk brakes (unless I get really lucky searching).

My biggest worries are:
Will I actually use it in the crud weather or will I be equally worried about coming off on the ice?
Will it just sit in the garage for most of the year when the weather turns and I'm on the road bike?
Is it even worth having a MTB without disk brakes (the guy at work tell me not!)?

I did the same this year, for commuting, local trails and rides with Mrs RM on her hybrid.

After a good three weeks commuting the definite advantages are being more upright to see around you, and the ride comfort which is amazing. Also being able to nip down paths and tracks I wouldn't have considered on my road bike is a plus.

Good fun out on trails too, but I'd not take it on anything too serious (I have a Hardrock Sport 29er). It is fairly weighty going uphill, but the gearing helps out a lot while I'm still returning to fitness following an accident.

If budget is a concern could you look at a finance or C2W scheme perhaps? Most places offer 0% deals over a variety of monthly periods if C2W isn't an option. I'm paying back just over £30 a month on my voucher which doesn't break the bank and got me a decent entry level machine, with the bonus of hydraulic discs which is what I was really after.

Oh aye, and nothing short of ice tyres will stop you losing the back, or indeed the front end as I've found out over the weeks.

It's a personal choice. Don't expect a consensus of opinion as you will only be reading responses from folk motivated enough to type a response. FWIW I re-entered the world of cycling with a mountain bike and used it both on and off road. I migrated to road cycling when I had my mountain bike stolen. I subsequently bought a replacement mountain bike, a TREK 4500 but is has had very little use as I've not got the urge to explore terrain that excludes road bikes. I do however have a flat barred tourer/expedition bike which allows the exploration of green lanes and tow paths and this has made my mountain bike just about redundant.

I'm also lazy and hated cleaning the clag off the mountain bike after a 'dirty' ride.

Disc brakes are wonderful but well set up v-brakes will serve you well. They haul my porky carcase to a halt with ease. Yes there's rim wear to account for but if you are not doing that many miles it isn't really an issue.

If you a re buying second hand then you can afford to take the risk and explore the world of MTBs and duck out with minimal financial loss if you find that it's not your cup of tea.

I mostly ride road bikes, but bought a second hand mtb of a mate. It is good fun for a change and gives an option in the snow. I wouldn't give up road cycling but intend to improve my technical mtb riding a get out more on the local trails and bridleways.

Ice isnt as bigger worry off road. I prefer it when it freezes as all the mud n sludge freezes. Disc brakes aren't a decision maker as you can get good stopping power out of a decent set of v's.

How much you use it in winter depends on how much you like cleaning and washing. If you think winter road riding is dirty then wait till you hit a trail. Saying that there is nothing like the tranquility of riding out in the sticks where there are no cars and few people.

I did this too.

I found a nice cheap hardtail, which had the bonus of hydraulic discs, and it's a lot of fun. Trail centres are nice, but I've also done some wild riding and I've enjoyed it so much that I've treated the bike to an upgraded fork and wheels.

It doesn't get as much use as the road bikes, but this winter when it was really windy, I went mountain biking (you can't feel the wind as much in a forest, and you're more worried about not crashing into that tree). The bike and I were pretty mucky when I'd finished, but I would have looked much the same on the roadie that day too.

I would recommend disc brakes though, they don't have to be hydraulic, but get them. Rim brakes don't work when they're covered in water and mud, which frequently happens off-road.

i have an owned from new 1992 Marin Bear valley non suspension mtb , its only ever seen mud a handful of times and has been used on the road most of all , its a great bike and will never be sold .

but has been un used for last 2 years , but must admit did think about getting it ready for use soon

My inner Buddhist would like to suggest "The middle option"

How about going for something like a specialized AWOL? I don't like skinny tyres on wet, cold greasy winter roads and although MTB can be used in the wet and mud, I don't enjoy it... and I really don't enjoy cleaning the bike and the back of my car down afterwards.

With the AWOL I can get out, get on a toe path and have a few hours out. The guards stop a lot of the crud, then when Im home its 10 mins with muck off, the hose, a re-lube and dry down and shes set for next time out. 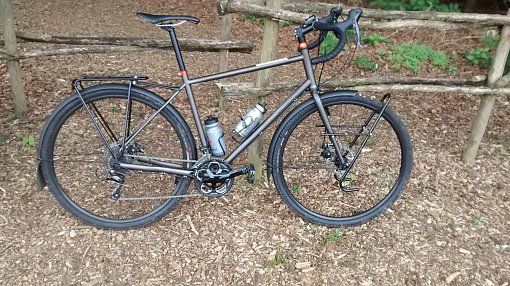 The AWOL might be out of your budget, but yclo cross bikes (such as the Spesh Tricross) take guards and will be very capable.

I'd have to disagree with the posters who have commented on v-brakes. When you're riding down a steep incline offroad in the wet & mud then v- brakes just don't cut it against a disk setup. Owned plenty of v-brake mtbs and none have come close to the Avid disks I have now. I wouldn't go back.

As for getting an MTB go for it, even if you don't want to ride in the ice, the option of going for a ride off the beaten track is great and as a bonus your bike handling skills will improve too which is great when you're back on the road. Win win!

I have an MTB (30 quid off a colleague, had it now for 11 yrs) with canti-brakes. I don't do 'extreme' off road stuff, but it's fine for muddy/snowy/icy trails.

LimeBurn said:
I'd have to disagree with the posters who have commented on v-brakes. When you're riding down a steep incline offroad in the wet & mud then v- brakes just don't cut it against a disk setup.
Click to expand...

Depends on what the OP is planning to ride. They may not be comparable to disc brakes but he should have no issues. I have never had a problem with V's and have been down plenty of steep inclines in the peaks in all manner of conditions. Might grind a bit with mud on the rims but that's it.

I just use a rigid MTB for commuting atm .

If you buy a mountain bike be sure to find a local club and go out with them to learn some routes. Disc brakes are wonderful, especilly for off road.

I got a MTB (Boardman HT) last November as I fancied something a bit different and am loving it so far. On the road bike wind, ice and to a certain extent rain put me off going out but on the mtb I know I am going to get covered in mud so the weather doesn't play such a big part.

As for sitting in the garage all summer I had the same concerns but think it will get quite a lot of use alongside my road cycling when I fancy a change of scenery.

Can't comment on the brakes as I have only ever ridden with discs.

I only ride two bikes, one is a hybrid CX type bike basically a rigid MTB which i use for commuting and have done for 2 years on road, the other is my main MTB which is used for what it's built for, if your going to get into riding off road get used to bad weather and the possibility of stacking the bike

once you get those two things out of the way you will love riding and also find a group to ride with, i regularly ride Epping/Swinley and now Wales has been added to my list, i keep fit commuting just so i can ride the MTB, oh and when the weather changes you will love riding the MTB there is something truly free about being in the middle of nowhere with friends tackling single track or trails or even more complicated stuff, but the main thing is to enjoy it

Desire to cycle from AM - PM

Do you suffer from GAS?