God Almighty, Just How Stupid Can People Be?

Last year in nearby Goodwick a 72 year old woman was mauled to death by her daughter's American bulldog while she was babysitting. Her injuries were so severe that the attending paramedics had to receive counselling afterwards. lumps of flesh were scattered over the kitchen and the garden.

This afternoon emergency services were called to the same address, another dog attack, this time by FOUR American bulldogs. Two people taken to hospital, one with injuries that are described as serious.

Can never understand why people want to keep these types of dog.
I think the breeds of dog on the banned list need to be updated. There seems to be too many of these incidents happening.
K

Location
The Frozen North (of England)

While it might seem reasonable to ban the dogs themselves, far more effective would be to ban certain people from dog ownership of any sort of dog. A certain type of person will weaponise whatever type of dog is available and, in their twisted minds, 'most suitable' for weaponisation.
P

Cycleops said:
Can never understand why people want to keep these types of dog.
I think the breeds of dog on the banned list need to be updated. There seems to be too many of these incidents happening.
Click to expand...

I've met a few American Bulldogs and they were lovely. The landlady in a guest house in Croatia had a mother and son and they looked like slightly more solid Boxer dogs and equally friendly and soppy. That's assuming the dogs in this incident were American Bulldogs - pitpulls being something rather different. Back when I was a kid Alsatians were moral panic devil dogs, then it was Rottweillers, then it was American pitbulls (which are banned, but many Staffies - a fine breed - seem to get caught up in the ban if owned by less well off people) and by implication, any dog with "American" in its name.

I've seen another American Bulldog type dog which are actually called Olde English Bulldogges where the Yanks had tried to recreate British Bulldogs but healthy and I concede I did get seriously slobbered over whilst trying to befriend one. The one I saw in a pub was just lazing about and aloof rather than particularly friendly, but still entirely suitable temperament as a pub dog.

Dodgy people will just get whatever sizeable breed is fashionable and mistreat them and train them to be vicious. They'd likely manage to create a line of killer retriever dogs given half a chance so banning breeds based on being called American or Bulldog is futile, and will hit perfectly decent owners of perfectly fine large dogs.

We already have laws against having out of control dogs, and it does seem here that just maybe the owner should have been banned from keeping dogs after the first one killed her mother. One does wonder why the person continued to keep more of the same type equally seemingly untrained and untrustworthy after the first time
Last edited: Thursday at 08:19
K

Location
The Frozen North (of England)

Profpointy said:
Dodgy people will just get whatever sizeable breed is fashionable and mistreat them and train them to be vicious. They'd likely manage to create a line of killer retriever dogs given half a chance so banning breeds based on being called American or Bulldog is futile, and will hit perfectly decent owners of perfectly fine large dogs.
Click to expand...

^^THIS^^
This with knobs on, well polished brass ones. 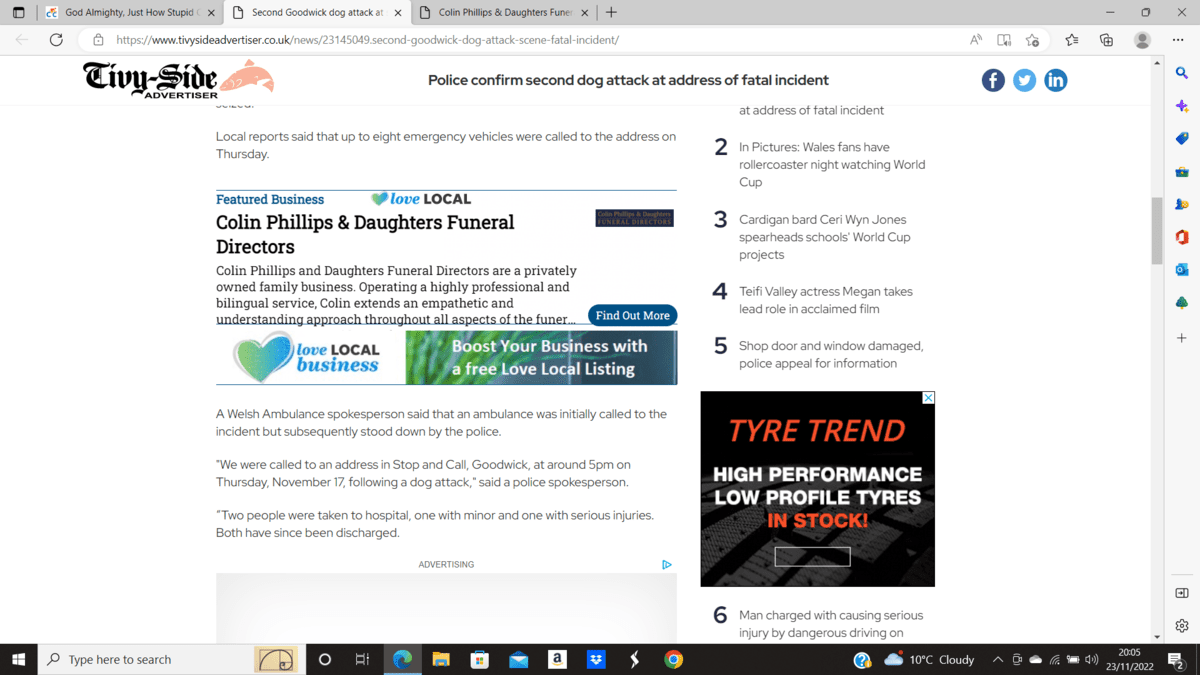 God Almighty, Just How Stupid Can People Be?​

I really don't think you can even imagine how stupid some people are.

I thought it would be in Essex or hull or somewhere but in west Wales!!!

Just shows it's the people that are the problem!
T

A former work colleague with a small farm kept a dog for a friend as a favour. Reason? It was a banned breed or looked close enough to get seized and he'd already had one or more taken. He thought the dog warden was after him for it so he kept it in his flat until he conned his mate to keep it for a bit. I worked with the mate's girlfriend who was a real animal person. Just had a way with any animal but she wouldn't have anything to do with that bullie dog. It was OK but she had this instinct it was only safe until it wasn't. She got her way and it went back. Did get put down as a banned breed but the guy was right. The warden took his dog but ignored a few others from the same litter in the area.

I was in a rescue centre cafe listening to a handful of staffie and American bulldog fans talking rot about them being good nanny dogs you could leave to look after young children. Shoot! The bulldog in the rescue centre that'll never be rehoused due to behavioural problems was there with one of the fans. It had a mouth that was probably big enough to fit my big head in let alone the young child it would be safe with. I left fuming! They were not safe to own dogs or have kids. Don't care which but if the dogs then they should never be allowed near kids, or vice versa!

Any dog can harm a young child and should never be left alone with young children for a few reasons. However people don't think like that and can be a reason you get issues. Other reasons are people can be utterly dodgy or stupid or both!

There was a guy who RAN a rescue centre some time back....dosent anymore...!

I grew up with dogs in the home from birth, first a bearded collie cross, then a smooth border collie called Penny. I had no siblings, so she was my soulmate, but after my mother left and took the dog with her, we had no more pets because there was nobody at home all day. Nevertheless, I remained a dog lover, and my automatic reaction to them was to say hello, and make a fuss of them.

In my twenties I hda a girlfriend who was timid of them, she'd never been hurt by one, but there had been one around that frightened her when she was small. I remember petting a dog saying "It's OK, he won't hurt", but she just tensed up saying "yes, I know, but....".

Then one day in my forties I went round my aunts. She had numerous dogs who were no trouble, but on this occasion she was looking after a rottweiler for a friend, and it went for me out in the garden. Fortunately I managed to dodge into the house and slam the door in it's face, then as I peered out of the window I heard it behind me in the hall after it had gone round the side and in the back door. Again I dodged and shut the door on it, so it didn't connect, and there was no harm done.

Or so I thought.

The next time I saw I dog out in the street, an 'ordinary' one, not a weapon dog, I went cold with fear. What really shocked me was how a lifetime as a dog lover had gone out of the window in a split second. The fear like that wore off aftera few months, and will make a fuss of some, but I'm not the same as I was, I'm a lot more picky which ones I approach, and I don't go anywhere near weapon dogs.

And I can better see where that girlfriend was coming from.

Weapon dogs are the product of centuries of selective breeding expressly for agression, of course they're more of a threat FFS! Yes, labradors and pitbulls both kill people, in the same way that cyclists and motorists both kill people.

My brother had a Staffie type dog and I was furious with him for this as he had young kids at the time. It was almost a rescue dog and the vets said it was probably stolen to be sold to him as it had no history previous to coming into his ownership.

Obviously it was spoilt rotten and lived in a loving home with all the health and care benefits that brought. Later in life it went blind and received all the medical care that my brother and his insurance could afford. I hate to admit it, but despite my reservations about the breed, that dog was the softest, most loving dog you could wish to meet. I grew up with big dogs in the house so have a feel for these things.

Nearly all these dogs (maybe all?) are twisted into brutal killers by their owners?

Cycleops said:
Can never understand why people want to keep these types of dog.
I think the breeds of dog on the banned list need to be updated. There seems to be too many of these incidents happening.
Click to expand...

It's not the dogs. It's the people. They clearly can't be trusted with animals.

Yes, it does! How are those who own or rent this house allowed to keep four of these vicious things, when another of them has already killed someone?!
Last edited: Thursday at 00:27

I like Skol said:
Nearly all these dogs (maybe all?) are twisted into brutal killers by their owners?
Click to expand...

Not always deliberately though. Ignorance / poor foresight is just as bad.

Former neighbours, two retired farmers, had dogs all their life. They bought a tri-colour border collie from working lines, but while it got two good long walks a day, it spent the rest of the day chained in the garden and lived outside. It did have a kennel, but was never allowed in the house. Guess the two old boys didn't know any better, but bottom line, the dog was bored out of his skull.

As a result, it became destructive, as it had nothing to do. And it also became aggressive - me, my dad, the postie, you name it. If it wasn't chained, you'd be had. Inevitably, it had a good go at one of its owners and was put down.

Regarding Staffies, I adore them, even though I'm a cat person. A friend of mine went to home a cat from Battersea, and I tagged along. We had to sit through this interview process, during which there was an animal in the room. We happened to have this white Staffy bitch in our interview room, and she and I had a whale of a time playing with various toys while my mate pushed paperwork. It's probably the most fun I've ever had with a dog.
You must log in or register to reply here.

How can I be eating so much?

How can this possibly be a 'ladies' bike...

Stupid/life threatening things that people (maybe you or me) do