Halfords/Boardman Bikes - How Good Are They?

How good are the Boardman range of bikes? I'm never quite sure about Halfords although their bying power should be huge!

Are there bany other bikes that they sell any good?

The Boardman and Carrerra bikes get very good user reviews and are very good value for money.

Some people report poor customer service from staff, though my experience is quite positive.

I think their better bikes are very good. Their setup skills are infamously variable. If you think about it there are going to be vast variations from branch to branch. For every branch with a very skilled mechanic there will be 9 with untrained 16 yr old plomkers who have no interest in bikes at all. Even if you find a decent shop if you go there 2 weeks before Xmas they will be flat out and none of the bikes will have been set up properly, they will just be chucking them out of the door, hoping for the best and knowing that a few will come back "yes Sir, we can sort that out at the first service, it's probably just the cables stretching as they are first used", a few won't be used beyond a potter to the local canal towpath so nobody will know or care that the gears don't really work, and more than a few will have a Dad on the scene who's more than happy to fix it and demonstrate his extreme manliness and general competence.

I'd have a Boardman though, they look good.

I have two Boardman road bikes and they are both excellent. The set-up on one was fairly shabby but the other was ok - some fine tuning was required but that's all. I haven't dealt with Halfords since purchase so can't tell you about after sales service.

I'd say definitely worth consideration if you're in the market for a new bike and can put up with the shame of entering Halfords (shopping online for discretion is an option).
C

I Have the Boardman Hybrid Comp - essentially the Lowest end of Boardman bikes.

It is a really good bike, fullstop.

The only complaint I have is that after 2 months I started to get the cables stretching out and I didn't know what was going on so I took it to a LBS who said that the brake pads hadn't been toe'd in correctly (there was a noticable squeak going on), other than that I had no problems with the set up.

The bike is light (11kg) and very powerful brakes, every day as I leave work I get up to 15-20mph then slam the brakes on down to an almost stop and I have been very happy with the performance. Gear ratios are good too (I'm learning to climb) although I have had the chain come off the chainring several times.

A very important thing though is that it does look nice too.

Can't say much about Boardman or Carrera bikes, as I don't own any of them.

My previous bike was from Halfords. Setup was a bit on the naff side, and after a few days I had an issue with the gears and due to this the chain came off and snapped, as it wrapped itself up between cassette and spokes!

The after care from this was equally shocking, basically my branch didn't really care, and were far too busy to replace my chain with a new one! Although much complaining later I did get what I rightly deserved, and some new spokes fitted, due to some damage.

Such an experience has put me off Halfords for a bike. Purchased the new one in a LBS.

I still use Halfords for the odd thing, mainly car shampoo etc...

But I'm sure there are people out there that have had good experiences.

I had the Boardman Comp road bike last year and upgraded to the Boardman Team Carbon Ltd this year... one of the few bikes to get 10/10 in Cycling Plus mag... you need to spend several hundred £ more to get the same spec from Specialized / Cannondale / Wilier etc.

I love mine - light, stiff, double-tap SRAM is a dream to use.
I will probably upgrade the wheels shortly as I want to start racing, but the Ritchey Pro rims are strong and seem to be staying true at the moment.

The Ltd edition ones are all sold out now, but the same bike is available in black for £999.

For a grand you can't beat it. Take it to a reputable LBS to get it set up / checked over though. 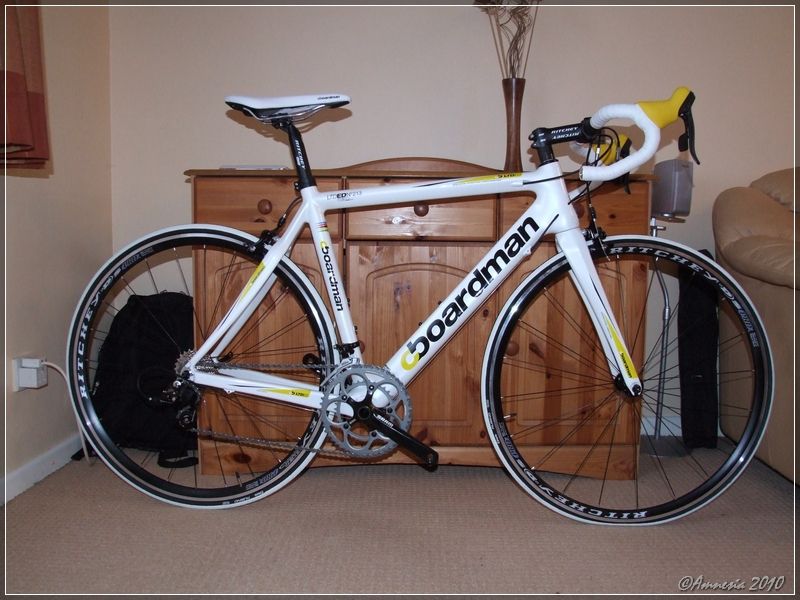 Those ones amnesia got are droolingly nice.. anyway to answer the question directly

Halfords/Boardman Bikes - How Good Are They?
Click to expand...

I have a COMP and it has been fantastic. If only I could get my hands on a the Ltd edition I would have bought it in a heartbeat.

Im hoping that by the time my work have finalised the c2w scheme boardman have an updated range of the original type that came out in 2008 or whenever they got released.

I've got the Boardman Hybrid Pro Ltd, and basically they are the dogs danglies. Loads of bike for your money. I'd highly recommend them.

I'll let you know after i pick my SC comp single/fixed on Saturday.Must say pretty happy with Halfords White City so far,the assisstant was very enthusiastic about my choice and said he could not wait to see it himself as no-one had ordered one before !

A work mate of mine bought a Boardman Hybrid to ride to work with and to use in the London to Brighton, 2 days before the ride the crank snapped. He took the bike back to Halfords and to say the customer service was appalling is an understatement.

This has only just been resolved today after getting a solicitor involved and trading standards. Halfords replaced the bike with a new one this afternoon, but said that they accept no liability for the broken crank and that as far as they are concerned he received exemplary customer service.

While this might be a one off, if you were going to buy a Boardman, get it from the LBS.

skudupnorth said:
I'll let you know after i pick my SC comp single/fixed on Saturday.Must say pretty happy with Halfords White City so far,the assisstant was very enthusiastic about my choice and said he could not wait to see it himself as no-one had ordered one before !
Click to expand...

Ooooh - interested to see how you get on with this... might be an option for next year's C2W scheme... been thinking about a fixie for a while.


@ Obelix1664 - the cranks are made by SRAM, it's not Halfords fault it was defective, however their aftersales (and before sales for that matter) can be very hit and miss. You can only get Boardman bikes from Halfords and BikeHut (owned by Halfords).

@ Obelix1664 - the cranks are made by SRAM, it's not Halfords fault it was defective, however their aftersales (and before sales for that matter) can be very hit and miss. You can only get Boardman bikes from Halfords and BikeHut (owned by Halfords).[/QUOTE]


Thanks for that Amnesia, you learn something new everyday...But you would have thought that it can't be doing the Boardman reputation any good if the aftersales is as bad as it is...

Forgot to add when he took the bike in to Halfords after the crank had broken, he was told, "sorry mate that's a special type of crank, I won't be able to get one of them"...

obelix1664 said:
Thanks for that Amnesia, you learn something new everyday...But you would have thought that it can't be doing the Boardman reputation any good if the aftersales is as bad as it is...

Forgot to add when he took the bike in to Halfords after the crank had broken, he was told, "sorry mate that's a special type of crank, I won't be able to get one of them"...
Click to expand...

A few people have questioned Boardman's decision to distribute exclusively through Halfords rather than 'proper' bike shops... it's bound to come down to cost though - the buying power of Halfords compared to sole-traders means transport costs, volumes etc are all in their favour. Ergo, they end up will a quality full carbon road bike for £1k that no-one else can compete with.

If I were Boardman Bikes I would be continually monitoring the after sales support (sic) of their distributor - maybe they are...

Location
Heworth the other side of life!

I have the Carrera Subway LTD https://www.cyclechat.net/ it's a cracking bike for the price, although I've changed a lot of things on mine (personal preference)

You can throw a lot of abuse at it and it'll take it with ease, it's a lot of bike for the money

Norm
You must log in or register to reply here.

R
raleigh chimera are they any good how old are they ?

Are Aero-bars good and are they comfortable to use?