Just a quick query ... refinishing a frame. Have removed the headset bearing cups and now want to reinstall in the frame. I've seen people using tools and jigs for this on YouTube, but is it OK just to use a couple of wood blocks and a hammer to tap the cups into place? Happy to make up a jig with a long bolt/washers etc if necessary, but won't bother if it's OK to tap everything into place carefully with a hammer, with vital parts suitably protected. Aware of the need to apply force so that things go in square. Thanks for any advice.

A press is better, I’ve use a homemade version, works really well. 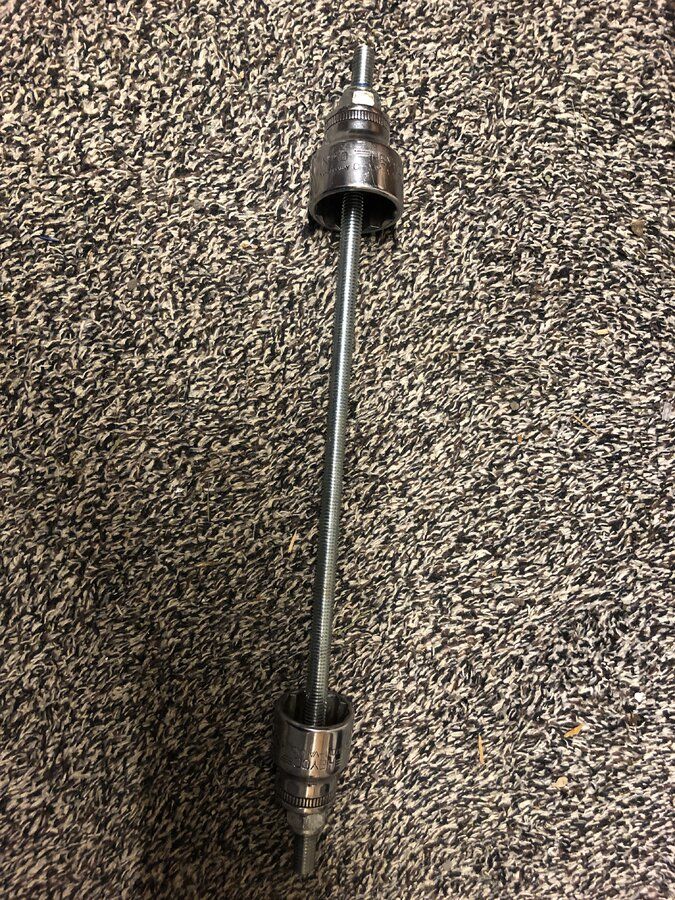 I'd go with the length of threaded bar and oversize washers favoured by MonkeyShred on YouTube. At least tell go in square.

OK, seems like a plan. No problem to make one of those up. Thank you!

They need to be seated fully so only as square as the head tube. Block of wood and a mallet

more important to get the logo in the right place

Steel cups can be bashed in with a block of wood and a hammer, if you like. Alloy cups need a press.

Bearings are one of the few things I tend to take the frame to the bike shop for - last time it cost me a tenner. Worth it to my mind personally - I've got a made up headset press but it can sometimes take a while to get it in square and I'd rather get it done right.

It's something I do very rarely though - once in the last 4 years.

The races can only fit one way down the tube and they stop when they reach the end. As Rogerzilla says care needs to be taken with alloy cups

Thanks all. The cups and frame are steel, so I will try the block and mallet approach first. No problem to make up a puller with a bolt and washers if it doesn't go well. Thanks for the advice.
S

Unless a bearing is a FT fit in a hole and can be easily pressed or squeezed in a bench vice, I just whack 'em in personally and I'm not just talking about bike bearings. The trick is to be careful to start them as straight as possible so they don't get wedged on the piss and only use small amounts of persuasion until the cup has properly entered the head tube. I tend to use a length of pipe over a shaft, or a flat block of wood and hit those with the hammer. That way you avoid impact damage to the part and it goes in straighter. When a part appears to be fully seated visually, I give it another, harder final whack just to be sure. You don't want a bearing part seating itself further once assembled and under load as it messes up the adjustment.

For folk like me who don't have a threaded bar to hand, this looks quite handy and reasonably priced.

found it the other day when contemplating a job.

I've done it with two blocks of wood on a very expensive steel frame and Dura Ace headset. As has been said, make sure the logo's are lined up !

Just take your time and ensure the cups are going in straight. For the £3.99 above, I'd be tempted to get that.

Only bash stuff if the bike is a skipper.

Put bearings in the freezer and warm the frame, hairdryer will do. Just gives a thou or two extra to play with.
OP

I've been quite happy in the past to fit wheel bearings in cars and m/bikes with a block of wood and a hammer. From the sound and feel it is easy to know when the bearing has 'bottomed' in the hole. Bicycles are a bit more delicate. In fact, now I think about it, this is exactly how I fitted new head bearings to a Triumph Sprint 955, but I had forgotten that I also had the cups in the freezer overnight. Thanks for the reminder - that should make it easy.

Have ordered the press tool - I couldn't make one up for that price (country hardware stores not the cheapest).