Other than the obvious places like Rome & Venice does anyone have any suggestions on places of interest? I'll be riding it North to South (from Switzerland) so any suggestions are welcome.

I was recently in Bari, I couldnt say if it is nice or not since I was there for a conference and had no free time to explore but it might be worth looking up if you intend to go to the South of Italy.

Have also been to Lake Garda, which is very nice.
OP

Hi Rob3rt, Strange! That's my final Italian destination for the ferry to Albania. What was the town/city like?

Yellow7 said:
Hi Rob3rt, Strange! That's my final Italian destination for the ferry to Albania. What was the town/city like?
Click to expand...

I was staying just outside of the actual city of Bari, about 15-20 min bus ride in (but the bus service was piss poor, waited 85 mins in scorching sun for a bus one evening, if you are cycling you wont have this problem.) and when in the actual city I only really saw a very small part where my conference was held, i.e. the Lungomare area.

I didn't get enough free time to explore, the conference ran from 8:30am - 19:30pm for 5 days, with bus journeys to and fro and the unpredictable nature of the bus service. I basically shuttled between hotel and conference.

If you like cars then both Modena and Sant'Agata Bolognese are worth a visit, though Modena is Ferrari overkill. Pisa is a lovely town but as too many street hawkers flogging Rolex watches for 10E

Been to Lake Como which was beautiful. Just returned from Sorrento, the Amalfi Coast is amazing and Pompeii was unbelievable.

I have also stayed in the Veneto Region near Bassano del Grappa. If you are passing that way and in need of a B&B look no further than:

The Po Valley stretch is fairly flat and uninteresting but the northern section through the Alps/Dolomites are superb. Anywhere around the N Lakes.
I went around Marché and the Sibelline mountains last year and they are beautiful but seriously lumpy. They're on the route to Bari down the eastern side and avoid the busier coastal route. I'd recommend it for scenery but you may find you need shorter days. If you're crossing through Tuscany then Siena and any of the hilltop towns are worth a visit. It is hilly though through the spine.

The cynical would say that the church was involved in a mega battle with the Italian Communist party at the time and that since sports cycling was an Italian national passion it was good PR to ally the church with cyclists.

Not sure how effective the madonna is as I seem to remember that inside that church is a damaged bike from a rider who perished, so I'd get decent insurance as well - at the very least the free NHS Euro health card.

Sardinia is great for cycling though it's not the mainland of course.

I wouldn't cycle tour there in July or August - when are you going?

Have a great time - enjoy the coffee.

San Marino. I first saw it as an improbable triangular projection on the horizon, then I was cycling up it a few days after the Giro had passed. The tarmac was full of painted names, the largest being 'PANTANI'. The view from the top is stunning. 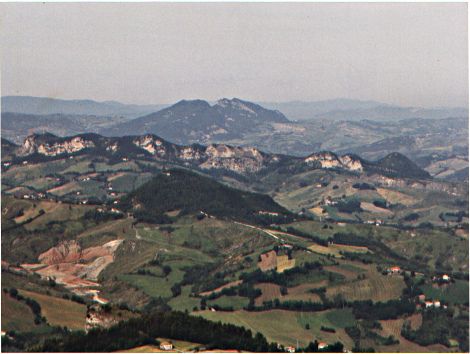 For a stunning panorama from high above Florence, climb the hill up to Fiesole. (Or take the local bus - number 7 - instead and save your legs, it's only 1 Euro each way. You can't miss Fiesole as it's the terminus for that route.)

San Gimignano is a beautiful, walled, hill-top town just an hour south of Florence, where cars all have to park outside. Narrow, cobbled streets and at least a dozen or so medieval towers are crammed inside. Well worth a visit.

I'd recommend the Susa Valley. (near the border north west).
Turin and surrounding countryside. Superga just outside Turin. There's so much to see in Turin (castle hidden in the huge park next to the Po).
San Marino.
Urbino (Marche)
Gradara (Marche).
Cesenatico (Emilia-Romagna)
Bologna

Where they filmed the Italian job is the Colle du Nivolet

I really wished I'd been able to go to Aosta.

Generally in Marche and the bottom parts of Romagne they are absolutely bonkers about bikes. You might find it a bit 'touristy' as another poster on here who knows a lot more about cycling abroad than I do remarked. Certainly true in the high season, not so much in April or before where it was more like UK coastal resorts out of season - 'dead'.

I've had Cesenatico described to me as the Blackpool of the Adriatic. I've never been to Blackpool but this wasn't meant as a compliment. My experience (a September holiday, so right at the end of the season) was that it was one of the best holidays I've had. The climate, the landscape and the people all make me want to go back.


As marinyork says, they're absolutely bonkers about cycling in Emilia Romagna (Marco Pantani was from Cesena and there's a monument to him at Cesenatico) and Le Marche. That whole coastline is packed with hotels which cater specifically for cyclists. I can recommend this one, run by a cycling family: http://www.hotelbeausoleil.it/

glasgowcyclist said:
I've had Cesenatico described to me as the Blackpool of the Adriatic. I've never been to Blackpool but this wasn't meant as a compliment. My experience (a September holiday, so right at the end of the season) was that it was one of the best holidays I've had. The climate, the landscape and the people all make me want to go back.
Click to expand...

LOL that's seriously funny. Some of the places along there - Rimini and Cattolica remind me a lot of UK resorts I've been to (and not particularly in a bad way, although some people would say that about say Rimini). Can't say that Cesenatico does! You don't get harbours like that and the ethos is calmer than some UK resorts. The climate stats for sep/oct in that bit of the world are quite good to other places where the tail off is more dramatic.


glasgowcyclist said:
As marinyork says, they're absolutely bonkers about cycling in Emilia Romagna (Marco Pantani was from Cesena and there's a monument to him at Cesenatico) and Le Marche. That whole coastline is packed with hotels which cater specifically for cyclists. I can recommend this one, run by a cycling family: http://www.hotelbeausoleil.it/
Click to expand...

I went past the Pantani statue in April. I also went past the hotel in Rimini. There's quite a lot of stuff quietly dotted all over the place because he was in the cesenatico cycling club and people there regard his hometown as cesenatico. Lots of stories about where he used to cycle in that bit of the world circulating. I went to a cafe in Fiorenzuola that proudly had a photo of Pantani in his later years and the owner displayed. The time Pantani stopped off for a pitstop in his cafe (as a motor racing fan it was a bit reminiscent of the time Michael Schumacher broke down at hockenheim and was almost having a picnic in the woods with marshalls). I was quite amused that during the Giro this year that people were tweeting in these stories to Harmon. The stage 5 on this year Modena to Fano covered a lot of this area (which Cavendish won). Described as a really boring flat stage by many (not Harmon), but it was anything but to me. They'd also resurfaced a lot of the roads in the 3 week difference between when I went and the Giro went over it!

OP hasn't replied yet as to whether he has any interest in sports cycling - but if he has I'd recommend "Pedalare" by John Foot - not as good as his "Calcio" (don't worry folks - both in English) but sports cyclists would find it interesting and it mentions lots of places with cycling connections.

+1 to Turin and the post above about a cheap bus ride out of Florence also reminded me - took a city bus once up into the high hills/mountains. Turin has a wonderful location and it's one of my favourite Italian cities.

Back to Italy - great thread - look forward to more suggestions.

Oh - I've always had a fancy to cycle down the Via Appia - anyone done it?
You must log in or register to reply here.
Similar threads