I bought my wife a Bianchi Dama Via Nirone 7 for christmas, an eBay bargain. It's in great condition with 9 speed Sora groupset and she really likes the bike, with one minor issue. Her right hand is very weak, not very dexterous and slightly smaller than her left hand. If you didn't know you probably wouldn't notice but it's enough to make gripping and using the bulky Sora STI's an issue for her. We've been in to our local shop for a bike fit to get them in the optimum position but she's still struggling a little and it's clear she doesnt have full control. Here's the bike in question: 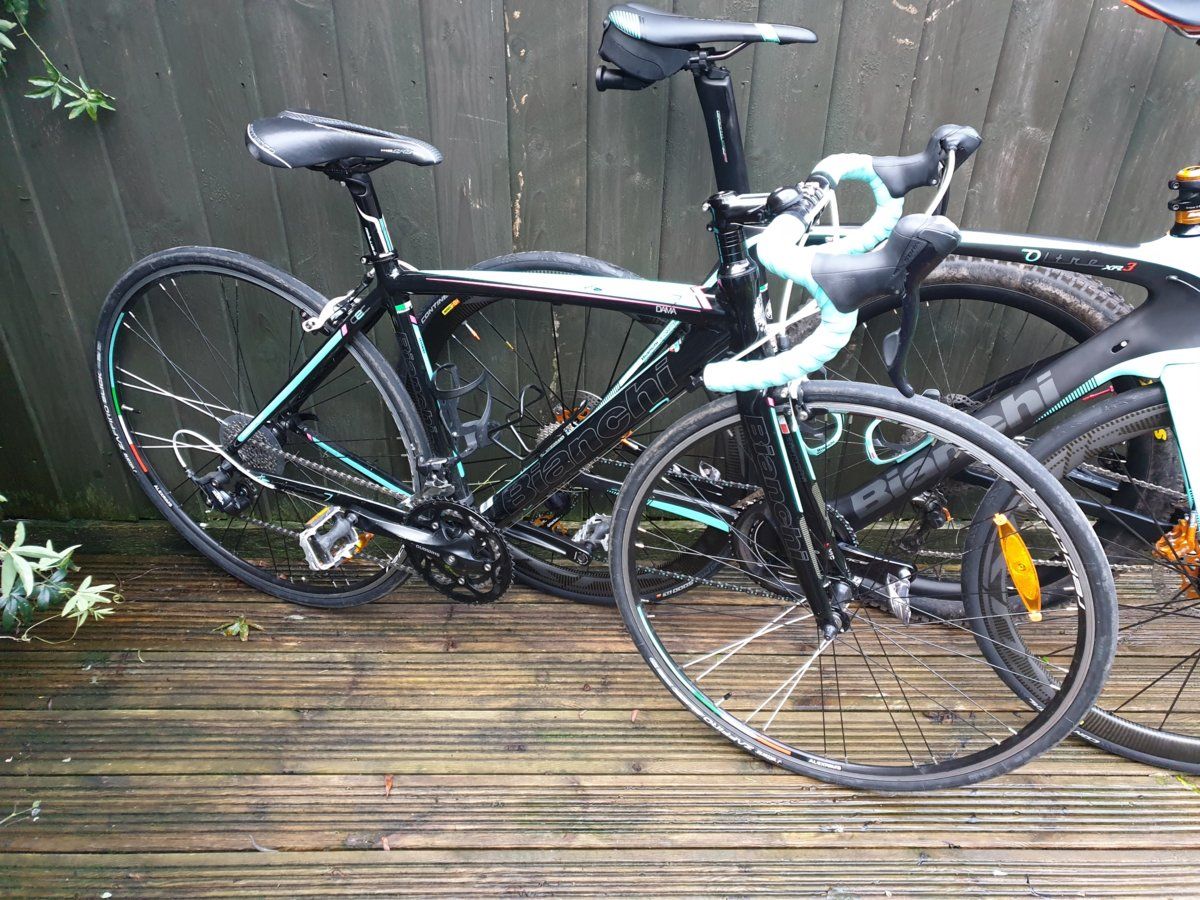 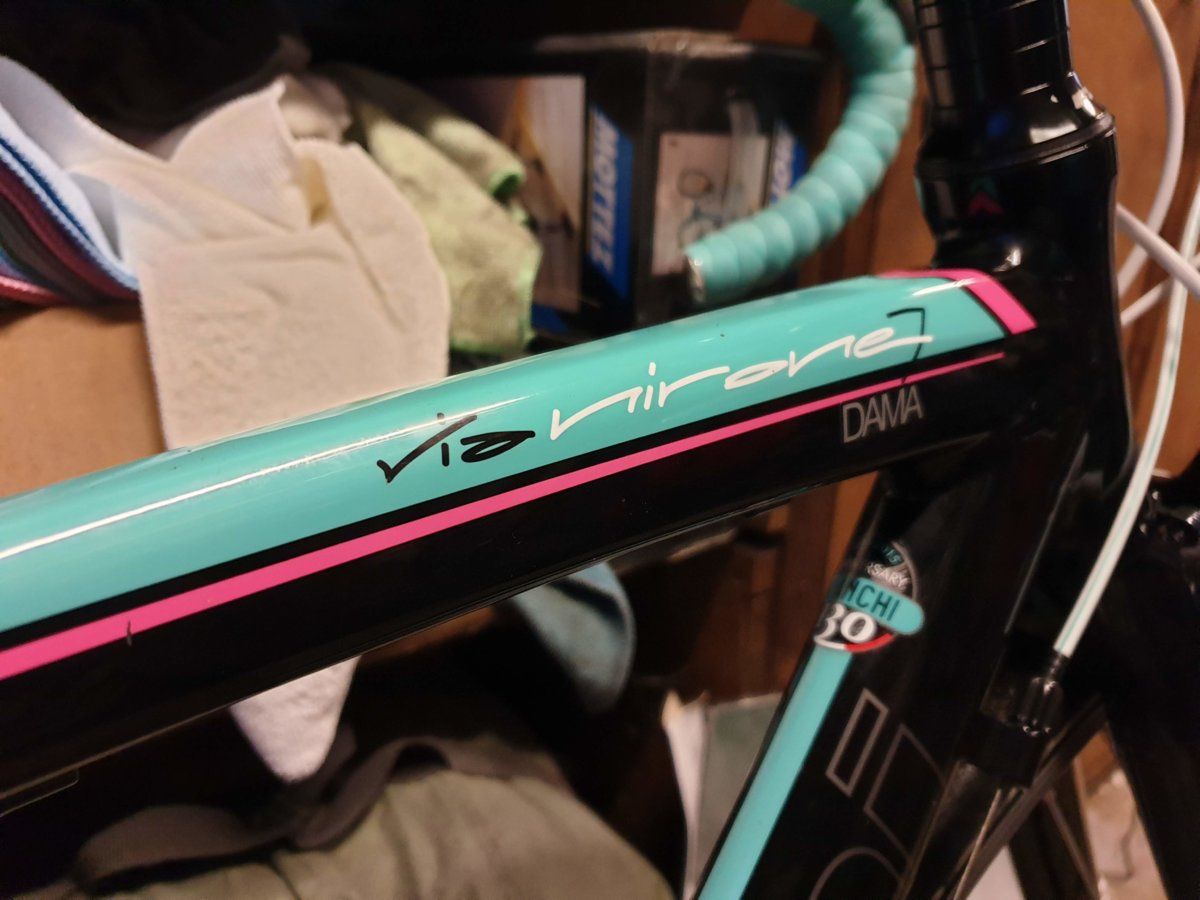 Not wanting her to be put off cycling before she's really started I've decided to upgrade the bike on the sly by fitting Di2. Whilst you can buy smaller versions of ultegra and 105 mechanically geared STI's they only seem to be available for hydraulic brakes so I figured Di2 STI's are probably the next best thing. Next challenge is to try and keep the spend small as I still don't know how much she intends to use the bike. I've decided to buy secondhand parts where possible to achieve this, and potentially push the boundaries of compatibility where possible.

My initial thought was to use 6770 Ultegra front and rear mechs with 6870 STI's - the 6870 STI's are marginally smaller than the older 6770's but still compatible with the 2x10 speed 6770 mechs. This would mean I could keep her current wheels by swapping the 9 speed cassette for a 10 speed. Unfortunately perousing old eBay ads suggests the 10-speed stuff commands a much higher price than the similar age 11-speed. In fact I couldn't find a used 6770 rear mech for much less than £170

Plan B was then sprung in to action and I have now secured STI's, rear mech and front mech

The STI's are Ultegra R6870, used but in pretty good condition with only a few scuffs on the bottom of the lever arms. Advertised as fully functional but only time will tell 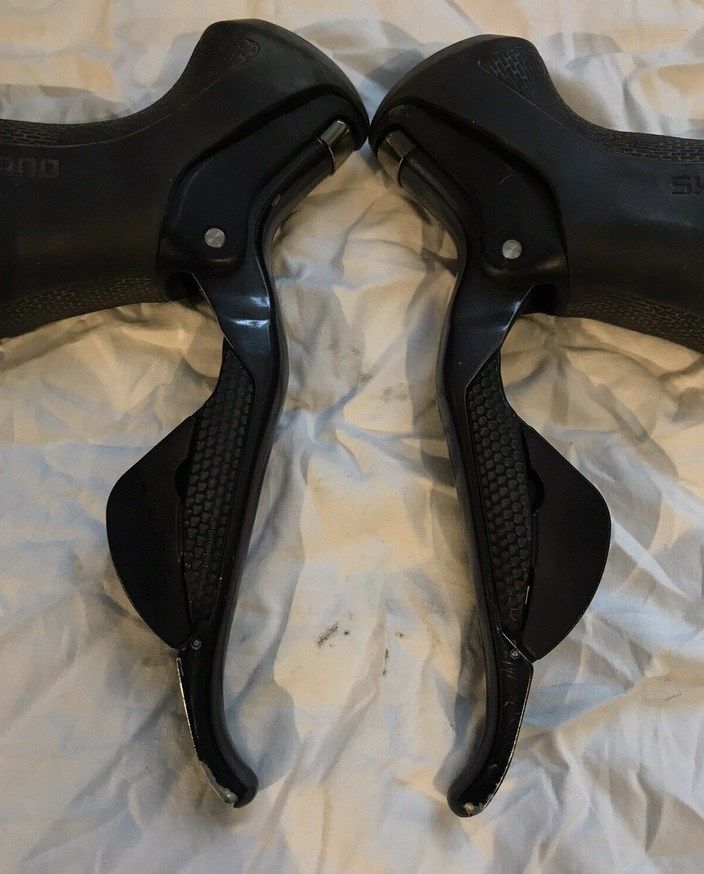 Rear mech, again Ultegra R6870, slightly scuffed but again advertised as fully functional. I'll give it a clean when it arrives and then plug it in to one of the other bikes to check that it behaves itself 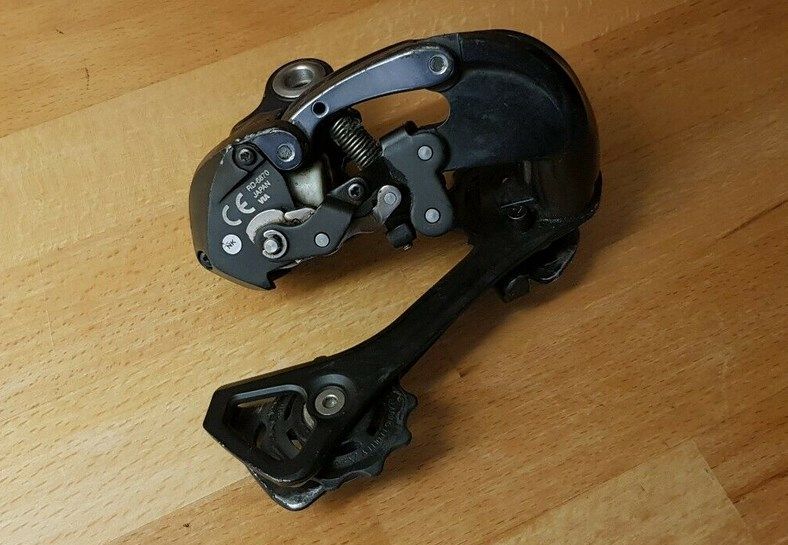 Front mech completes this evenings purchases, Ultegra R6870 and in apparently excellent condition, even coming with the same k-edge chain catcher that I have fitted to my other Di2 equipped bikes

This one cost £69. Less cleaning up to do on this one, but it will still be plugged in to another bike and checked its functional and straight before I start the swap 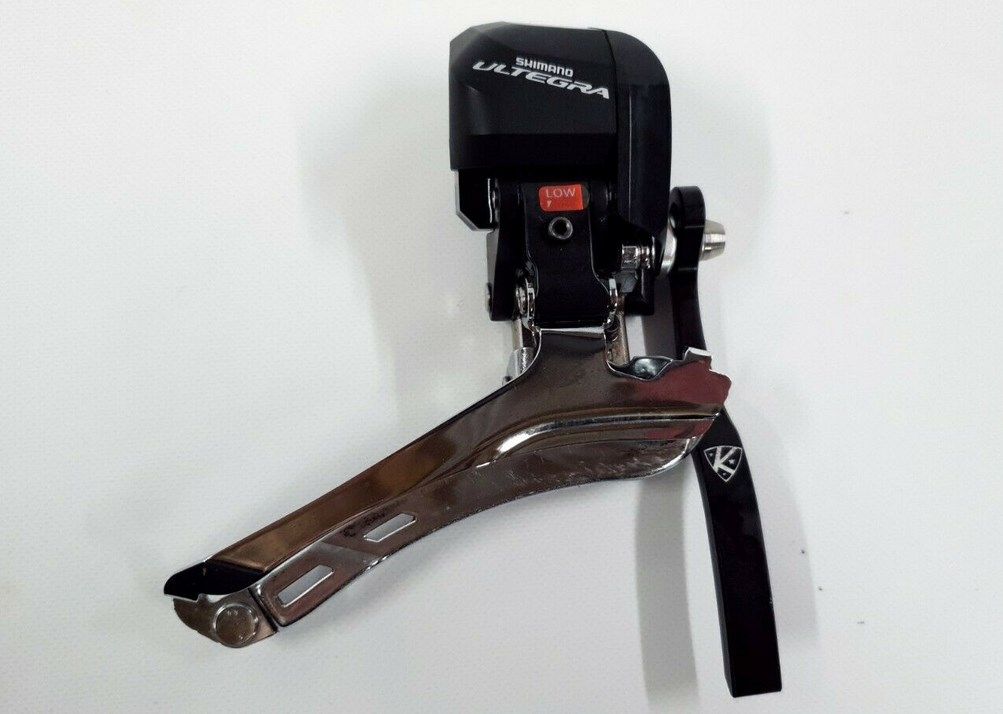 I narrowly missed out on a jumble of used eTube wires and junction boxes earlier which was slightly dissappointing, it's amazing how the cost adds up when purchasing them new! Whether I go for the bar end junction box or the under-stem one depends entirely on what pops up on eBay over the next few weeks for the right price

I presume everything will need to be externally routed but need to investigate the frame in a bit more detail to work that out before I go much further.

I also need to factor in the cost of a cheap 11 speed hub (and spokes if I can't find one with similar flange dimensions), cassette, battery and chain. Technically the chainset will need replacing too but I may try and modify the spacing on the existing one first. If I can strip it down and mill some material off the chainring mounting faces to bring the spacing down to 11-speed spec it'll save me the cost of a used Ultegra chainset, which seems to be about £80-100

Worth a pop anyway, I'll have to investigate how its constructed. It's residual value must be pretty low so it's not a major issue if I wreck it in the process

Sounds like a flimsy excuse for a cheeky little project!

I’m sure a man of your fettling talents could sort the scuffs on the levers!

That's interesting - Mrs D has very weak hands due to MS, so I went to a lot of effort to fit Ultegra cables, ensure the enclosed runs were not at too tight a radius, and then set them up to perfection, and they're now pleasantly light and she does very well with them now.

Nice project,I'm actually using Sora 9-speed rings with Ultegra Di2 without too much issue at the moment(will be swapped out for Absolute black ovals though when funds allow).

If you haven't got one already,I have an external battery holder going spare.
N

Any excuse is a good excuse. 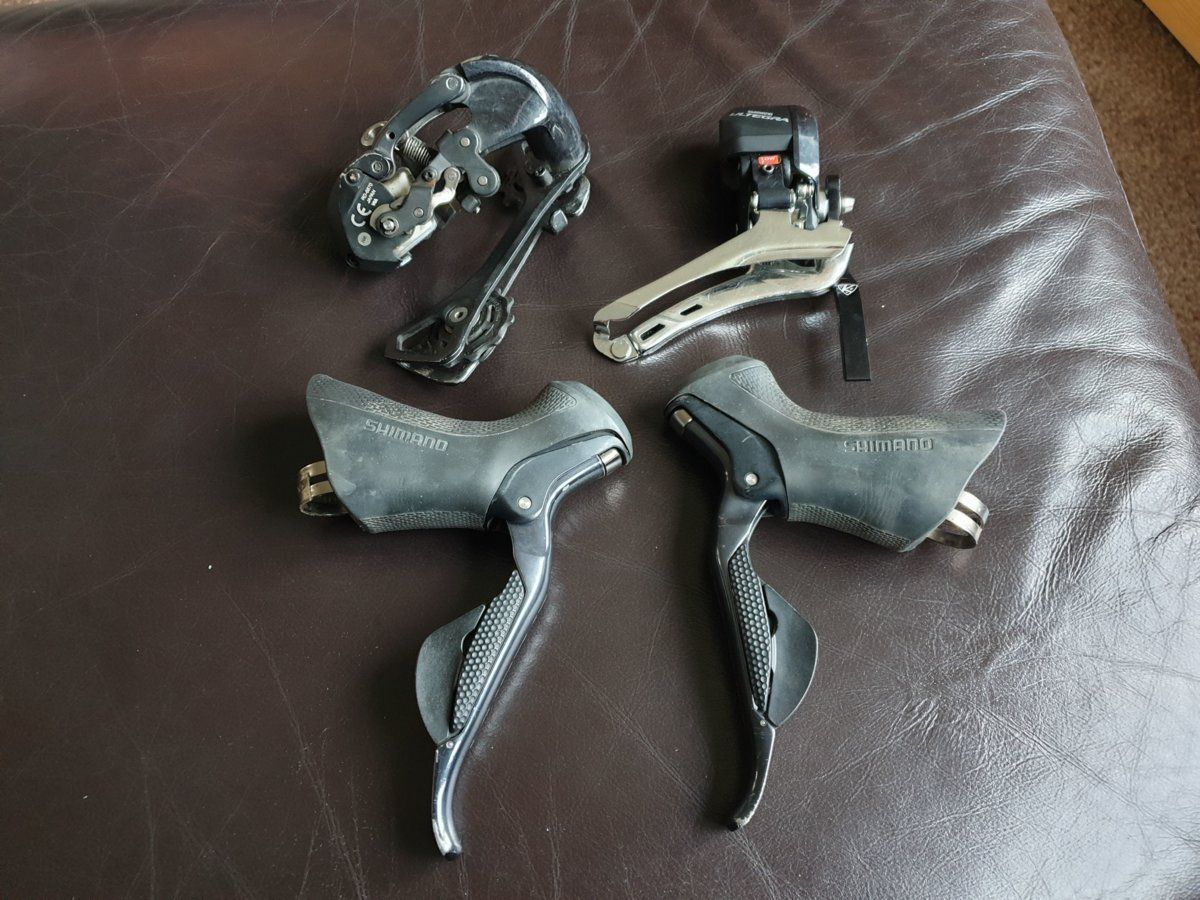 I've also sourced an under-stem Junction Box A and a mount for it which have arrived but not pictured, plus I've ordered an 11-speed rear hub, cassette and chain. I'm going to keep the 9 to 11 speed conversion costs seperate to give a rough idea of how much you would expect to pay to upgrade from 11-speed mechanical to 11-speed Di2 as well as my total spend. I should also point out that I'm not buying the absolute cheapest parts, but the cheapest parts that I think are going to be servicable for a useful period of time - there are some really cheap Di2 mechs floating around on eBay but having bought a couple of duds in the past I'm a little more careful these days

I'm quite pleased with that!! I just need to get the Brompton finished and out of the way so I can clear space to start this project

First job will be to rebuild the rear wheel with the new hub - I can't use my regular spoke length calculator due to the strange spoke spacing around the rim so it'll be a bit of trial and error. I need to compare the hubs first as it may be worth building it up with the existing spokes to see if they're close enough in length to work but thats for another day

Just found this watching keenly I have times when I have issues with my hands and I've been looking at lower cost di2 options.
Must admit knowing what's computable with what and which Di2 bits go with which is a bit too much a newbie.
OP

tom73 said:
Just found this watching keenly I have times when I have issues with my hands and I've been looking at lower cost di2 options.
Must admit knowing what's computable with what and which Di2 bits go with which is a bit too much a newbie.
Click to expand...

Agreed, it's a bit confusing at times but it's not too bad once you've got a grasp of the basics

I'm always happy to help if you've got any specific questions, but I'm still learning myself

I have cleaned up both mechs, which appear to be in good order although the rear could do with a touch of paint in places. I may do this another day once I've checked it functions properly

I also cleaned up the shifters which were fairly grimey as you can see in the pictures in previous updates. They've also come up really well as you can see here - clean on the right and untouched on the left... 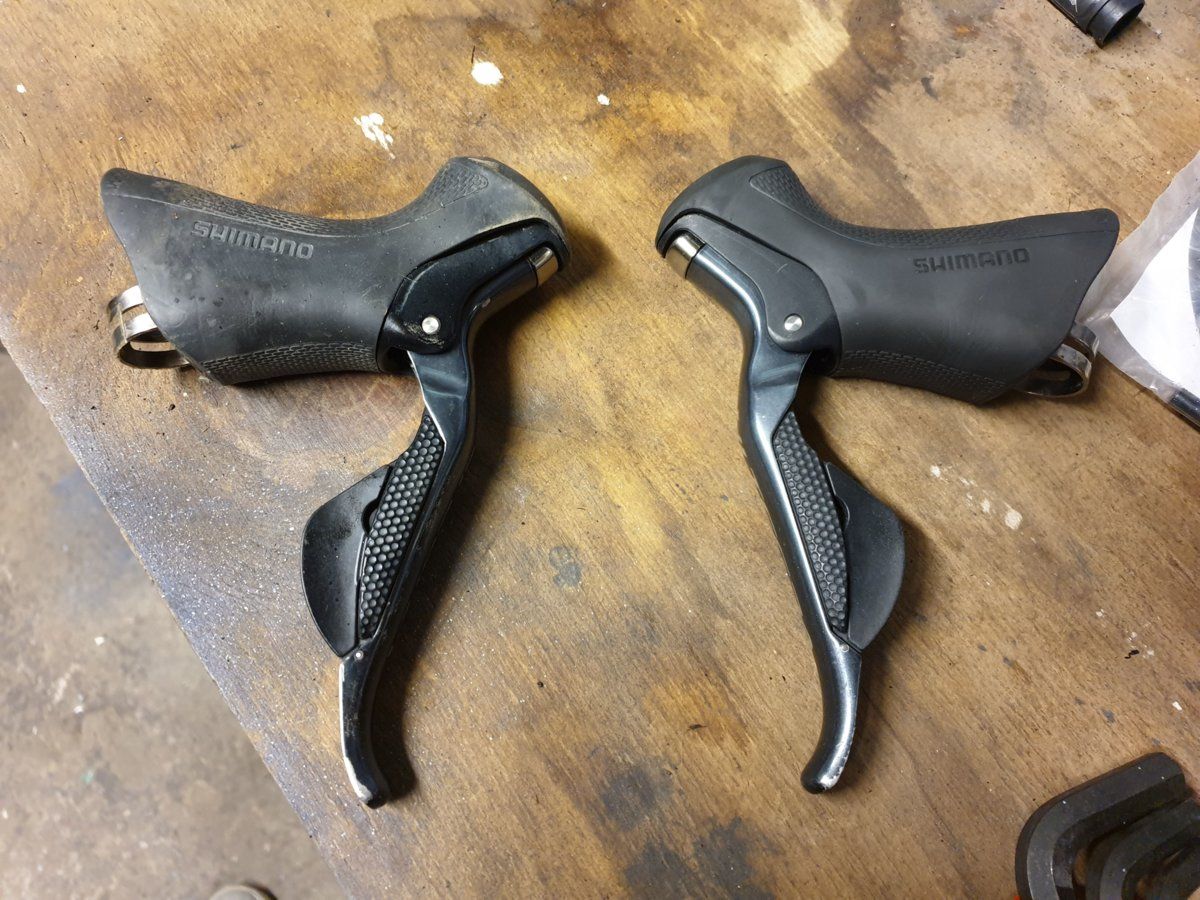 On the subject of eBay bargains, I've been busy again

Buoyed by my success I then "accidentally" bought a used Ultegra R6800 170mm compact chainset and a pair of used Ultegra R6800 dual pivot brake calipers. It goes against the original idea of doing the change as cost effectively as possible, but they were the only bits missing from a full Ultegra R6800 drivetrain and I'm a bit OCD

I recently received a rebate from an insurance policy that I'd been double paying which more than covered the extra spend so it was worth doing. The brakes arrived this morning and are in fantastic condition, the chainset is due tomorrow

Here's a photo of the parts I've amassed to date 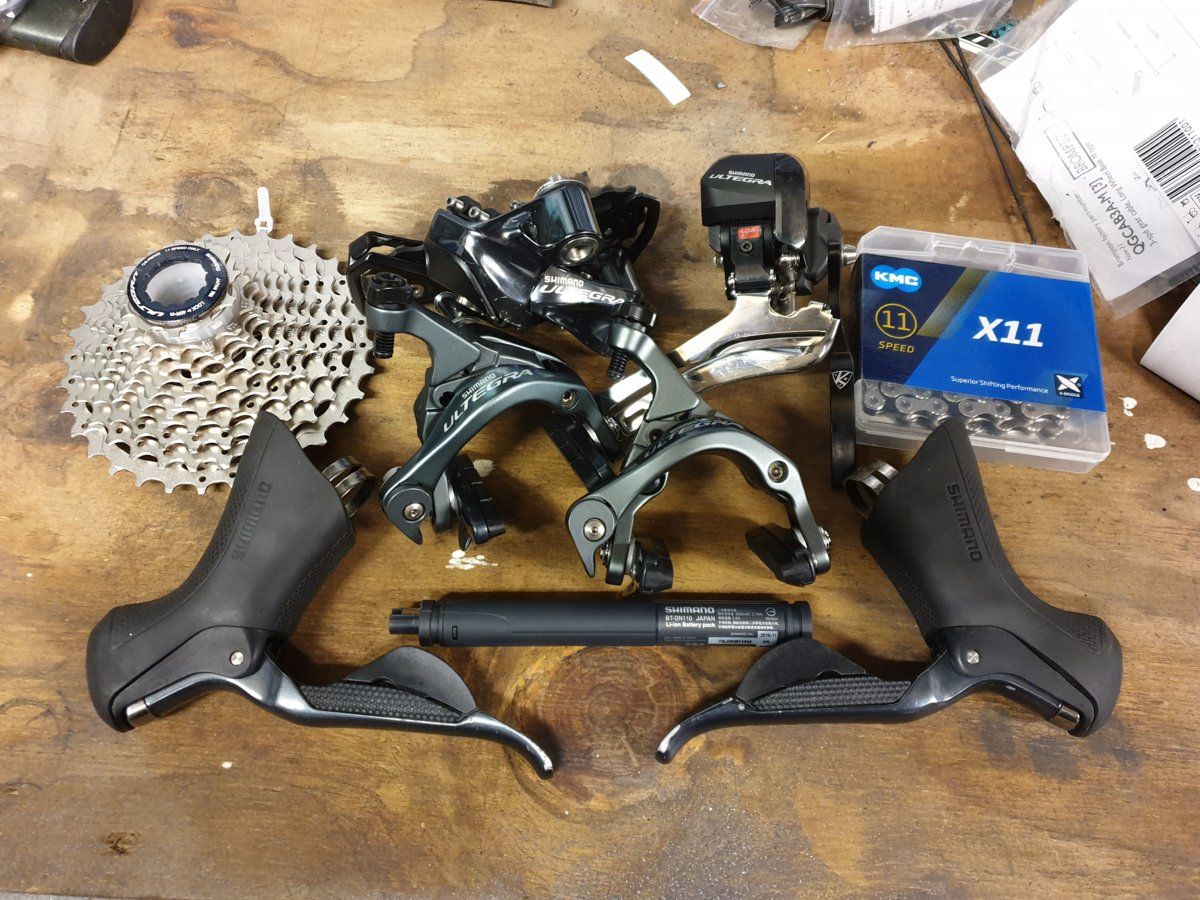 I've also ordered a new bottom bracket to go with this haul, a used one would be false economy much like the chain and cassette.

Looking at the frame there are no holes for internal cabling, everything is run externally. I'm going to have to work out where best to drill a hole in the seat tube to feed the wire in for the internal battery but shouldn't be a problem

Oh and don't worry I will

That will end up being a really nice bike.

Could you use the threaded hole for the cable guide? Would make it redundant for future use though.

I finally had some time to spend on this project today

Anyway, the Tiagra 11 speed hub arrived from Japan about 3 weeks ago and this afternoon I finally unboxed it. 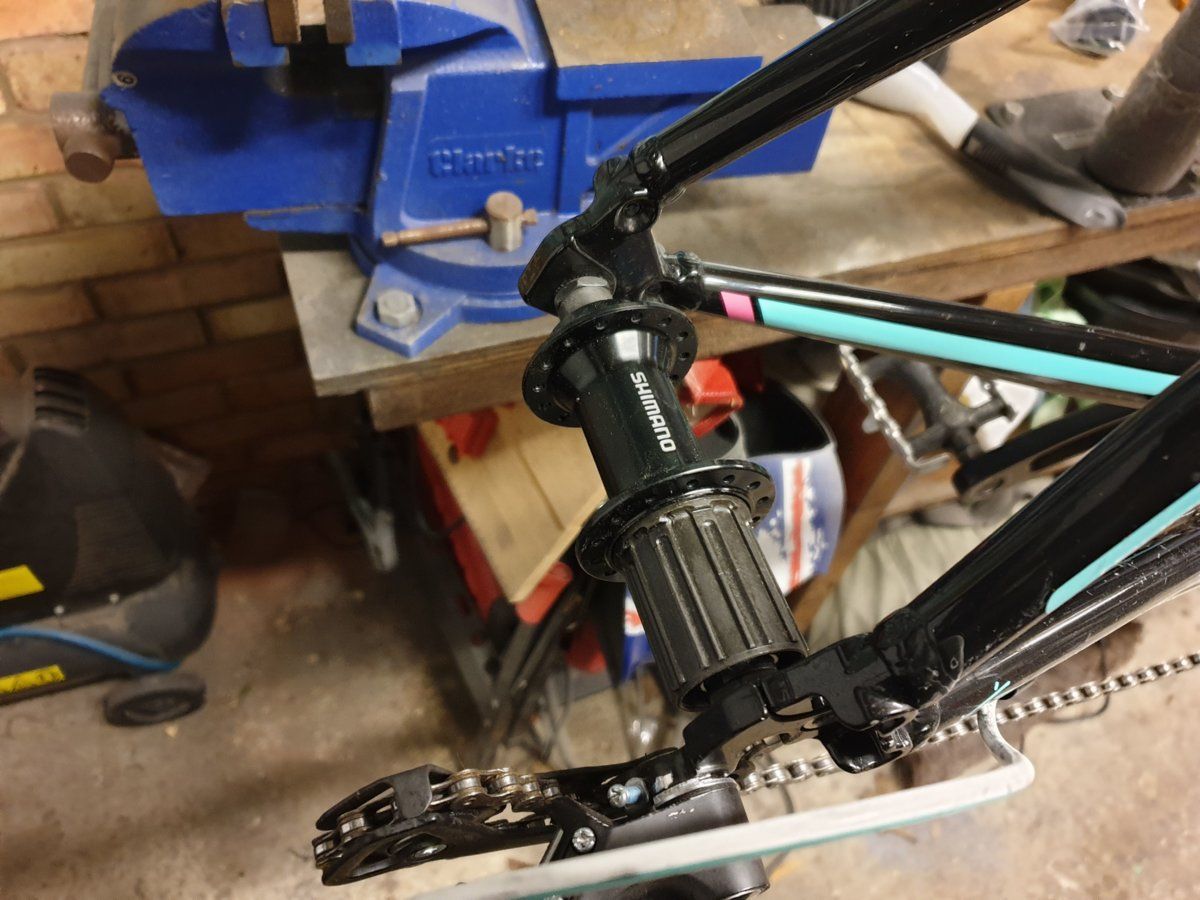 I chose the Tiagra hub for a few reasons - firstly it was one of the cheapest 11 speed 28 hole hubs available but, more importantly, the flange spacing and diameters are very close to the original hub. The bike has 4 white spokes per wheel and I wanted to maintain this look whilst saving the cost of new spokes 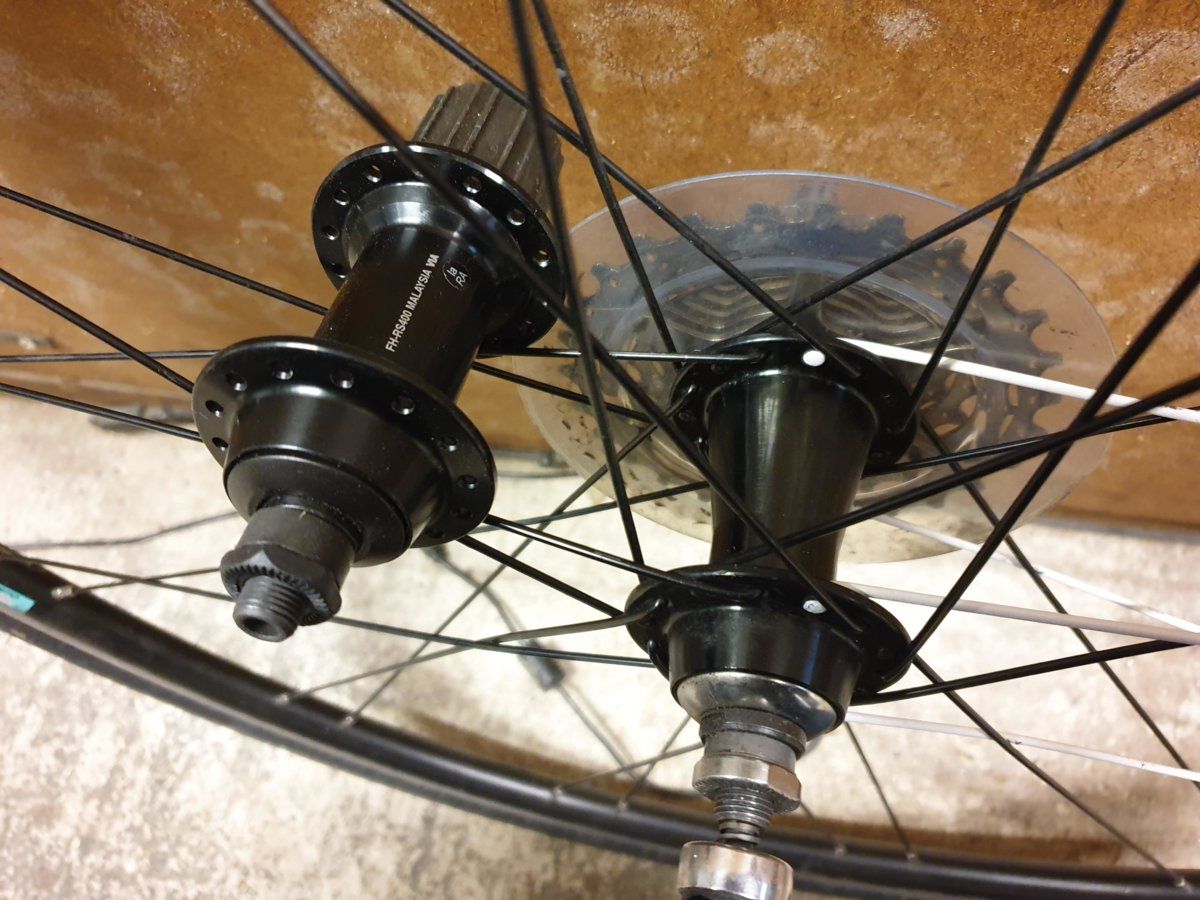 Once I'd visually checked for obvious show stoppers it was time to strip the rear wheel down, keeping the driveside and non-driveside spokes in seperate piles

I then laced up the driveside spokes first, starting with the white ones around the valve hole to make sure the original spoke pattern was properly replicated... 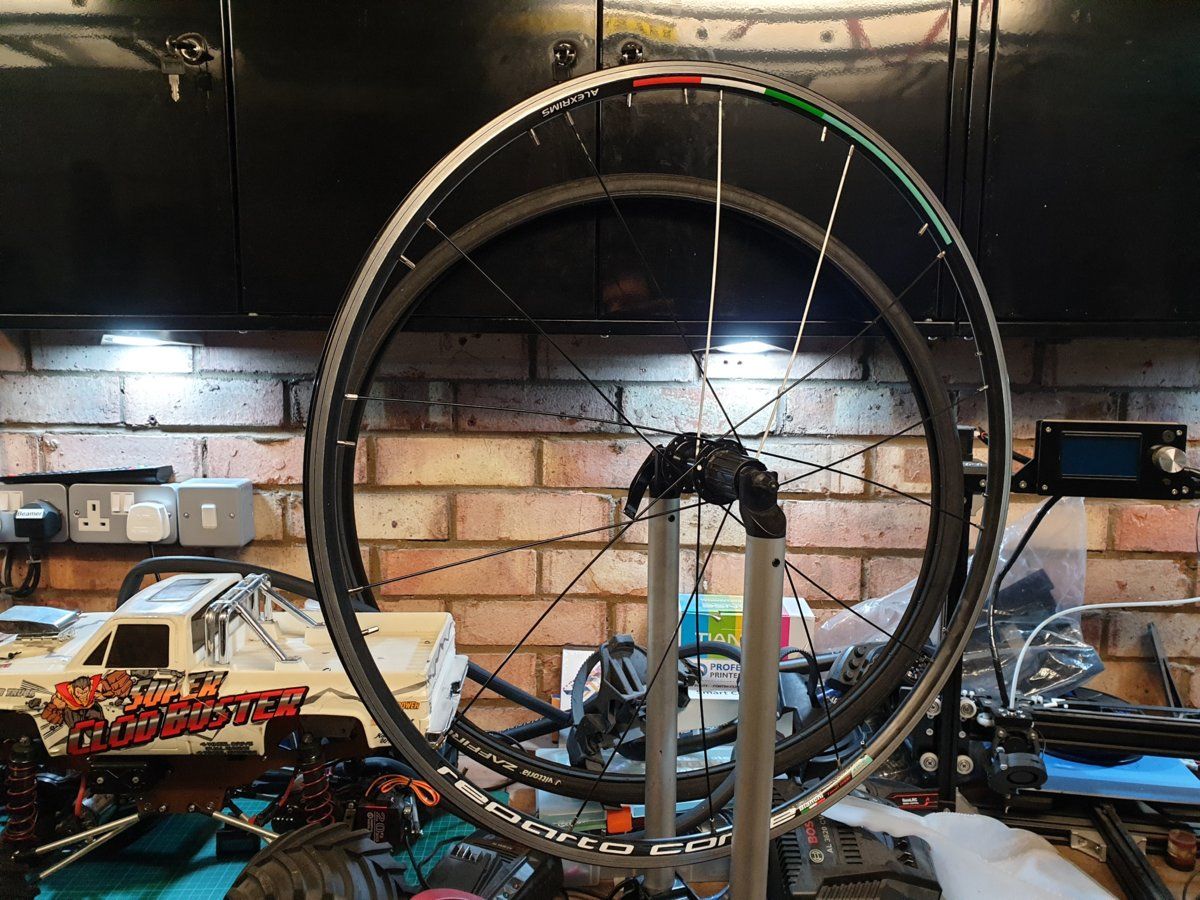 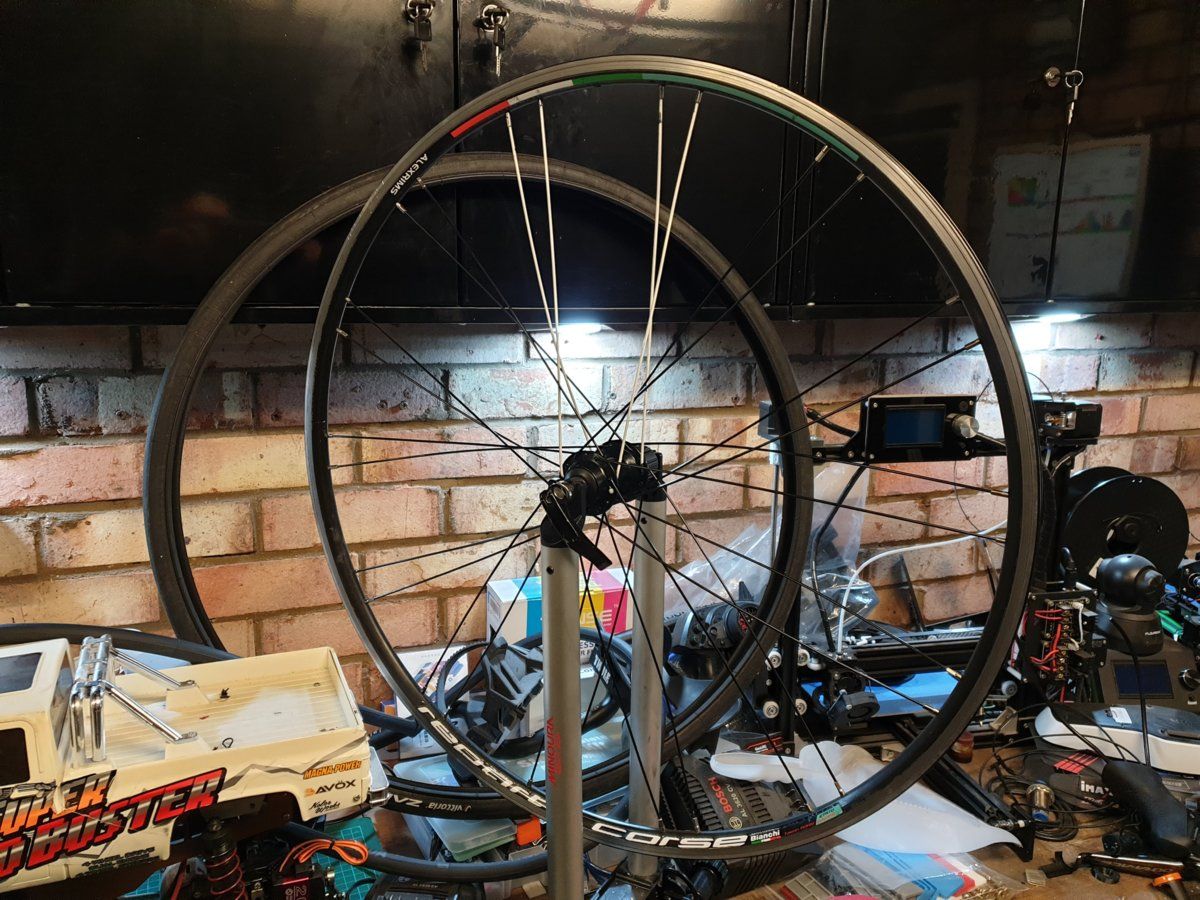 I've taken to finishing my wheels off in the frame or forks of the bike, simply because I don't own a dishing tool and my wheel jig is pretty wobbly. I've found it much easier to centre the rim when it's actually in the bike 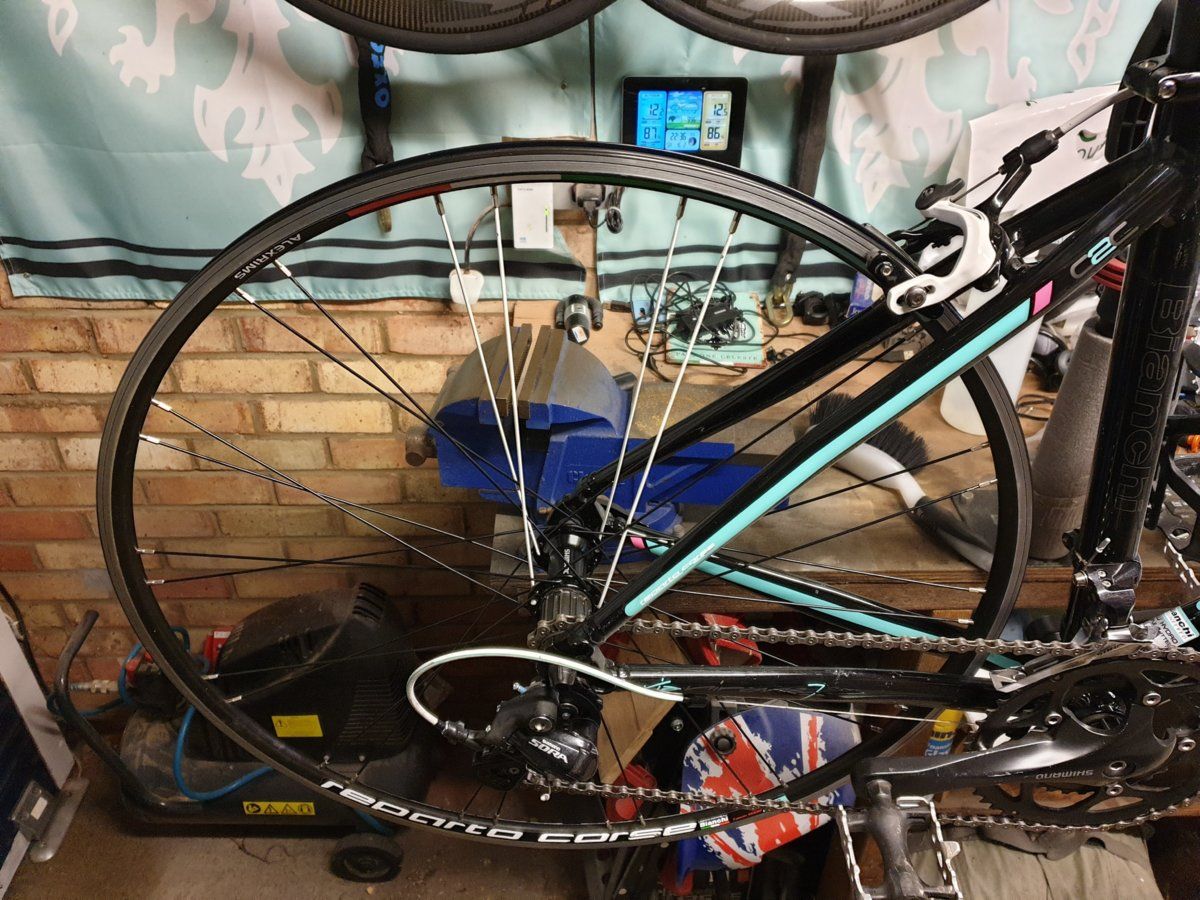 With the wheel true and tensioned up I refitted the tyre, tube and 9-speed casette with spacers - nobody would ever know I'd been tinkering 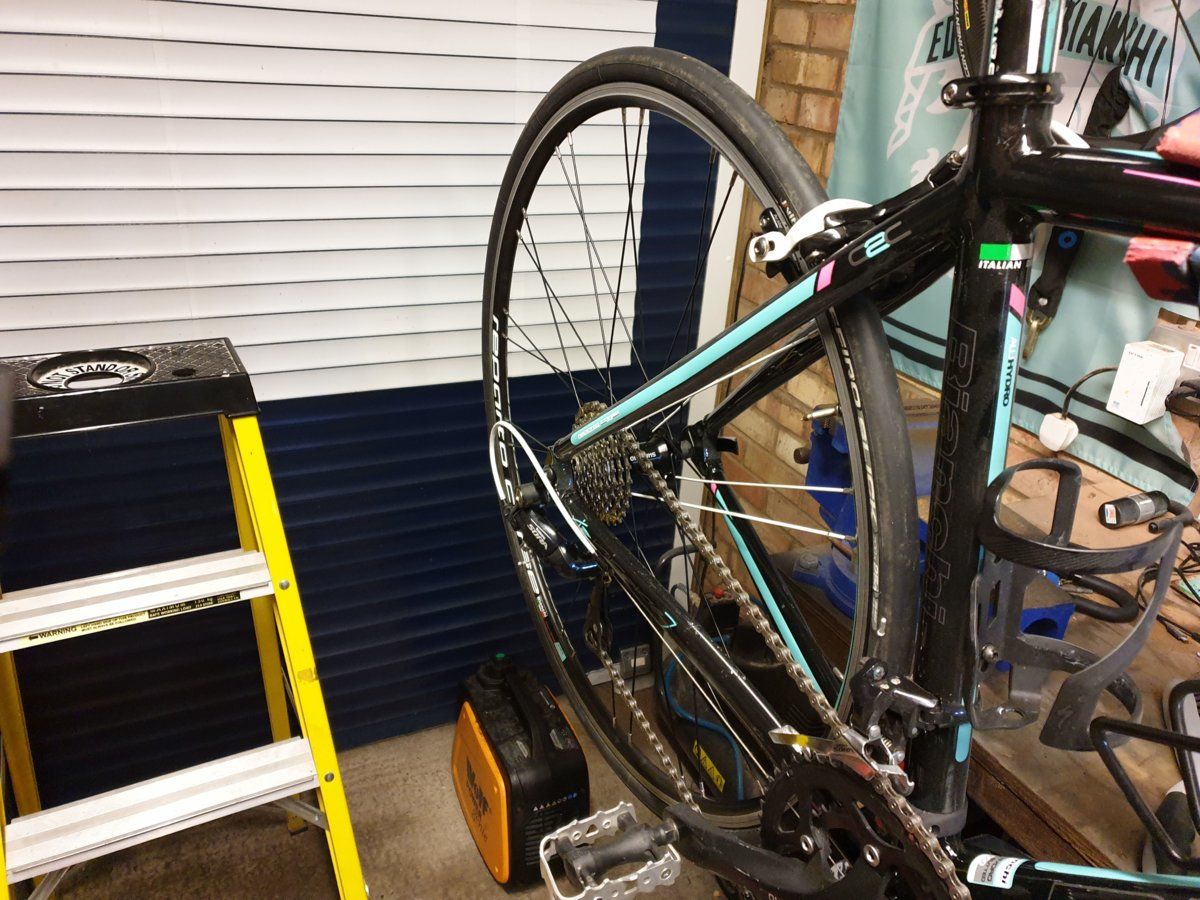 I tweaked the indexing and limit screws so it's all working perfectly again, although if the weather prevents me getting in to the garden tomorrow (which I suspect it will!) I'm planning to forge ahead with the upgrade

I've stripped all the remaining Sora parts off the bike along with the Reparto Corse brakes and started fitting the Ultegra bits and pieces. 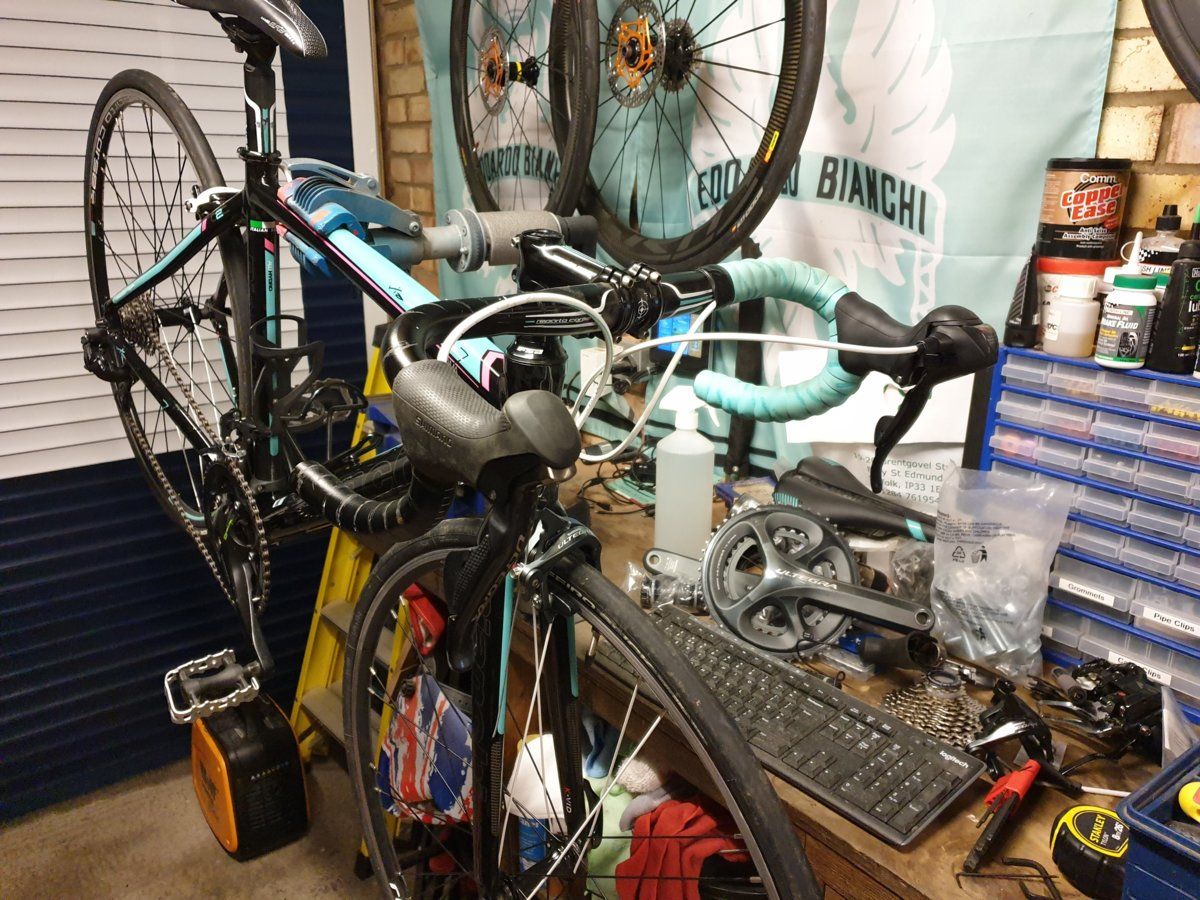 Logically the next thing to change was the rear mech as I'd already had to remove the cable to remove the old shifter so the mech and new cassette went on next... 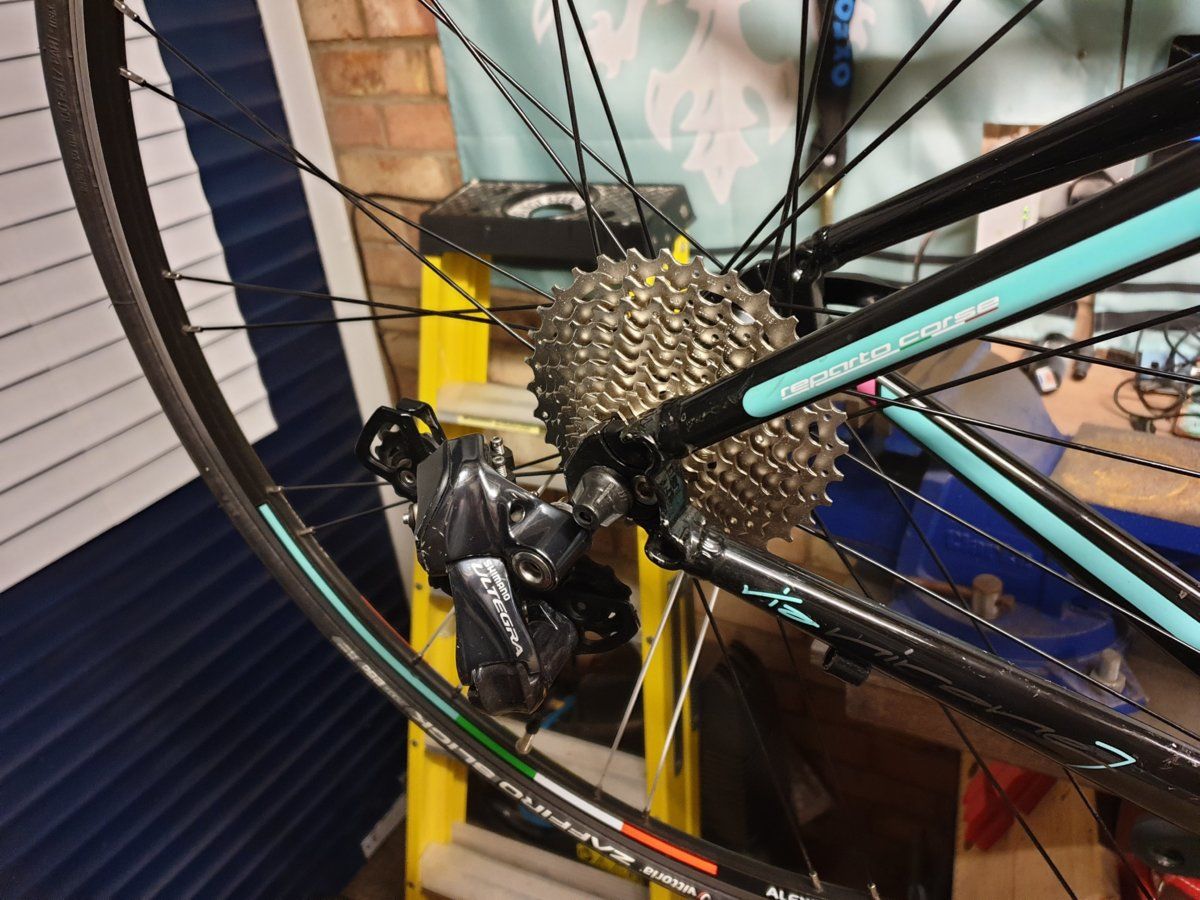 Followed closely by the chainset and front mech... 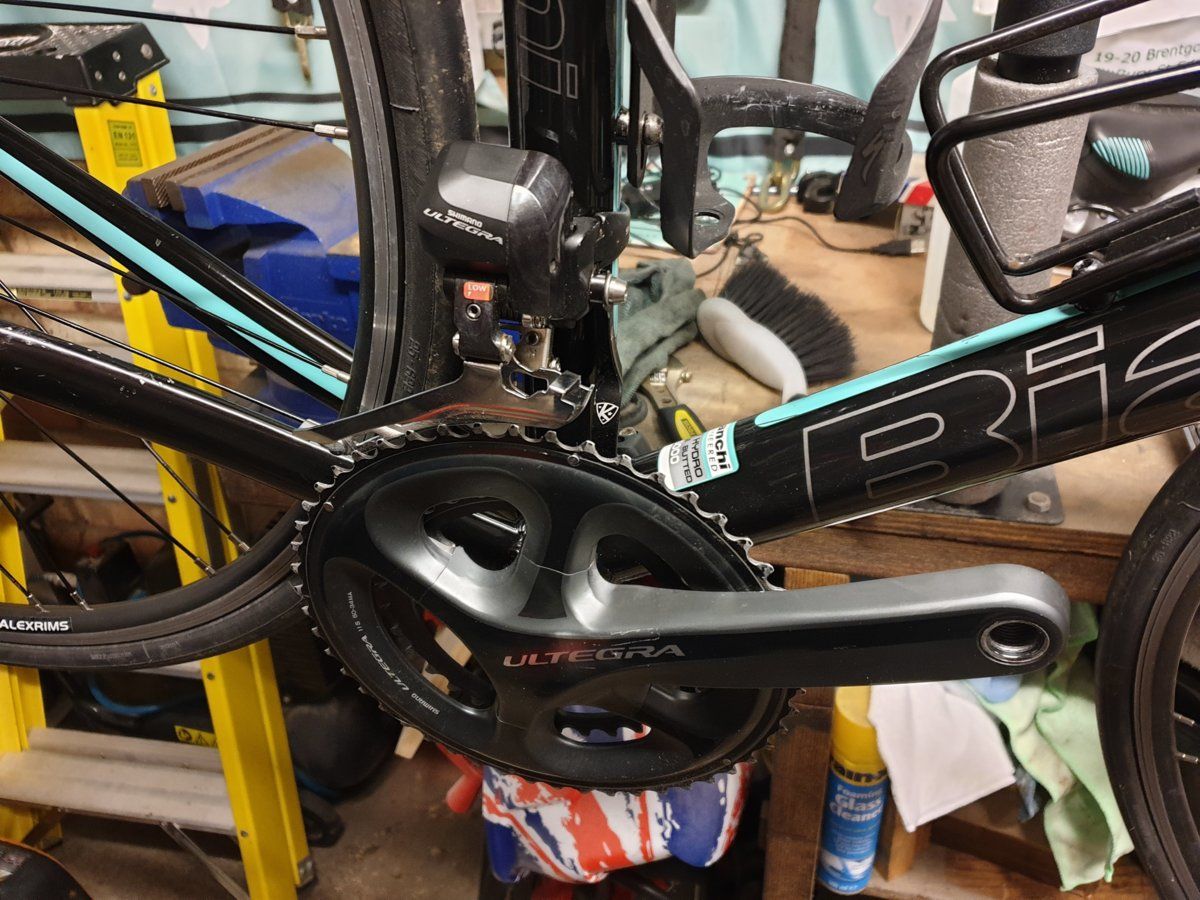 At this point I decided I may as well tackle the nasty bit - routing the battery cable. This meant drilling a hole through the seat tube, just below the front mech clamp but far enough away to prevent problems. I didn't want to go any closer to the bottom bracket area, this spot seemed like the best compromise between mechanical stresses and optimised cable routing 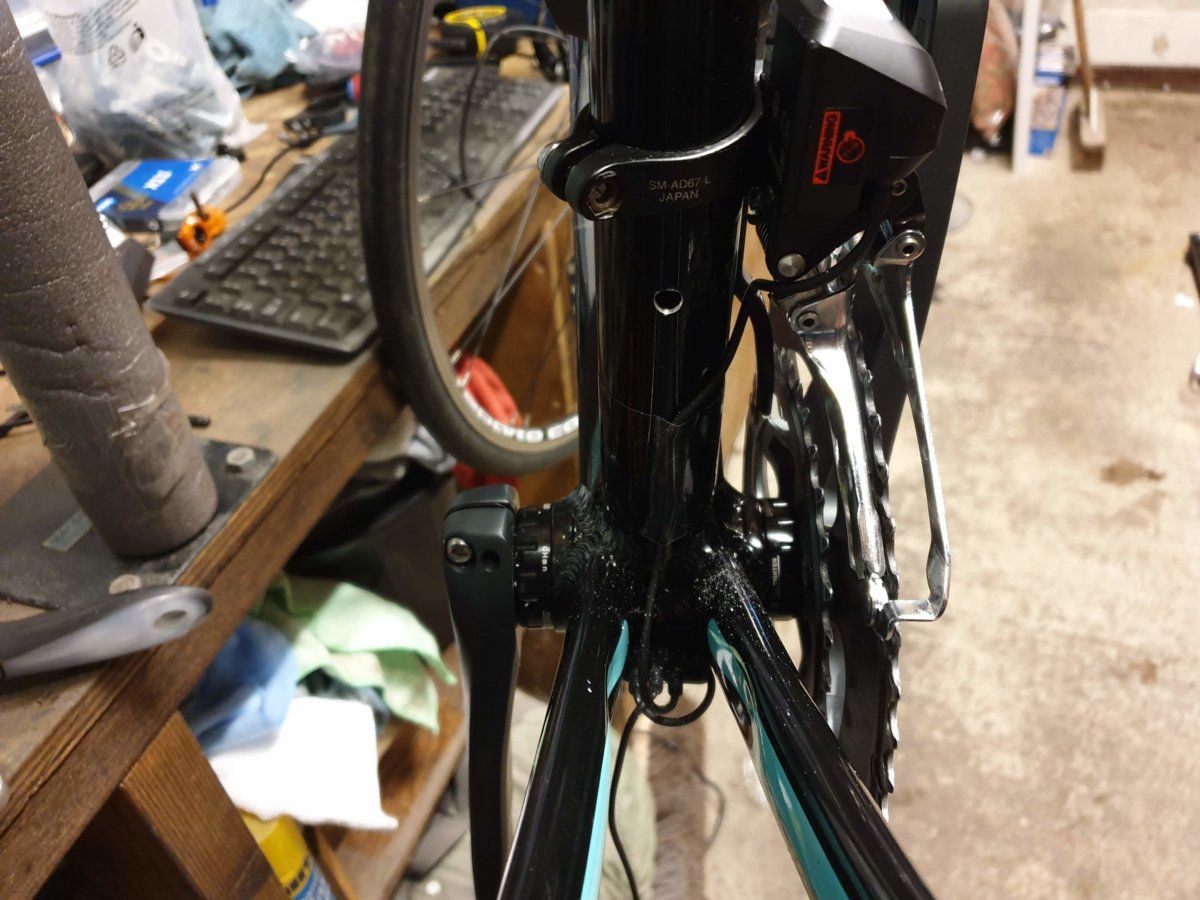 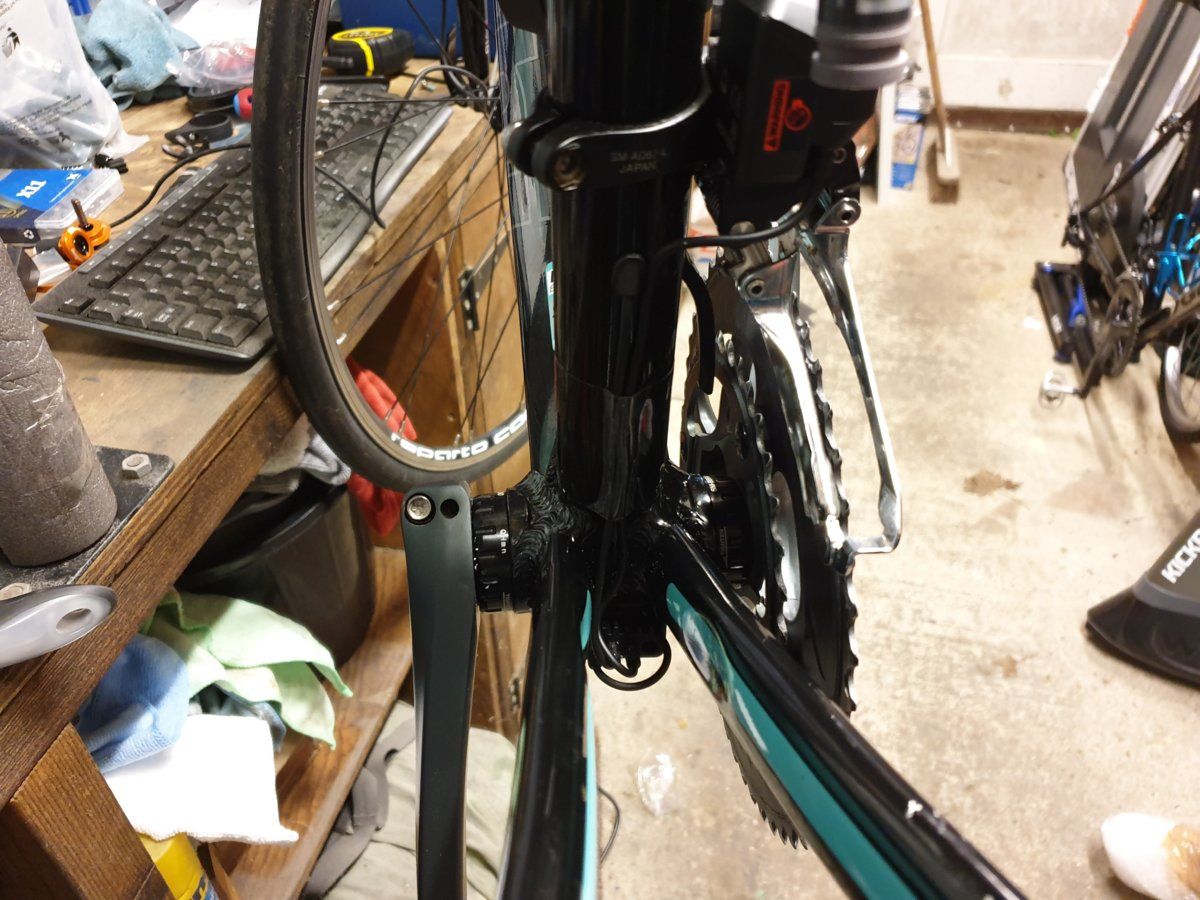 With that done I connected the cables I had available - currently the LH shifter and the rear mech are not connected but otherwise it's taking shape! I've plugged the battery in and connected it up to charge so it's all good to go when the other cables arrive later in the week. Also en route are bar tape and a battery holder to fit it in the seatpost (which I clean forgot about 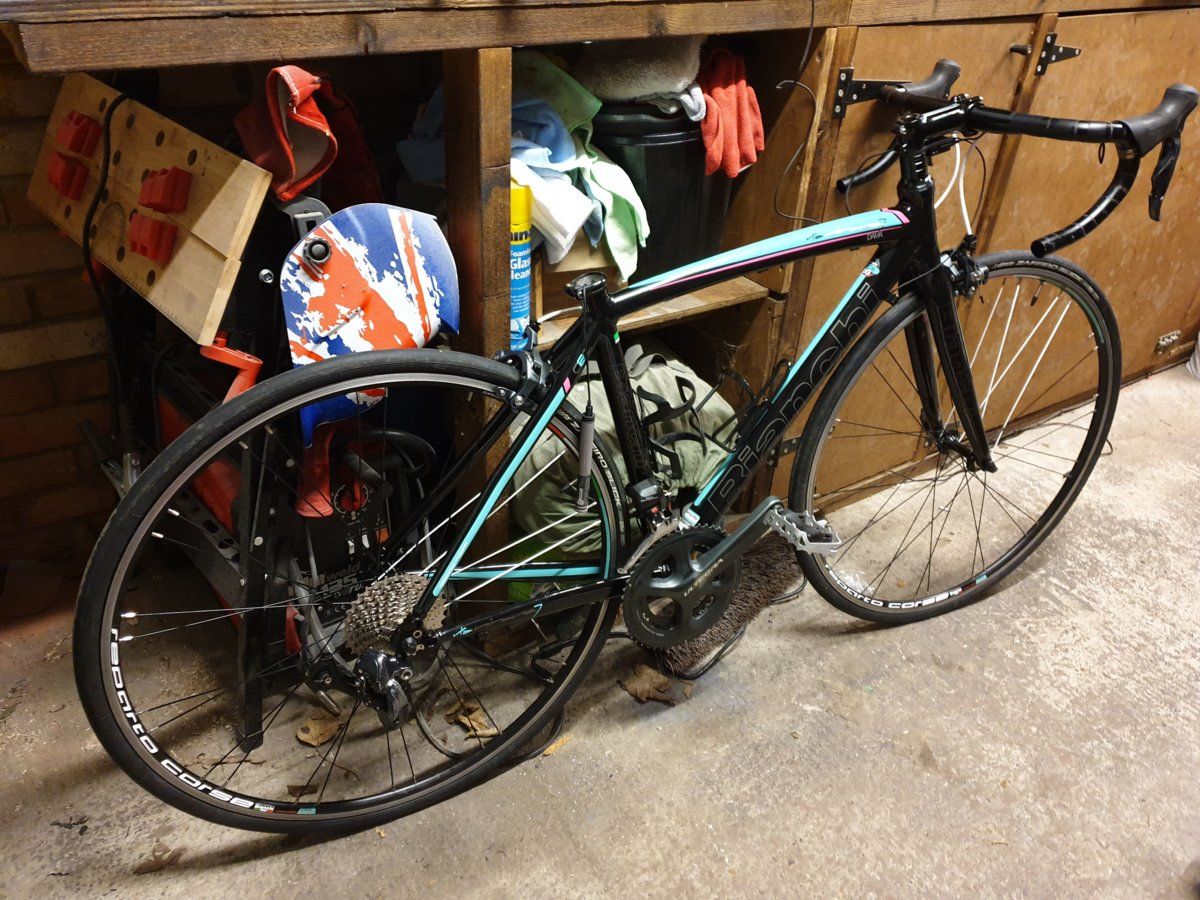 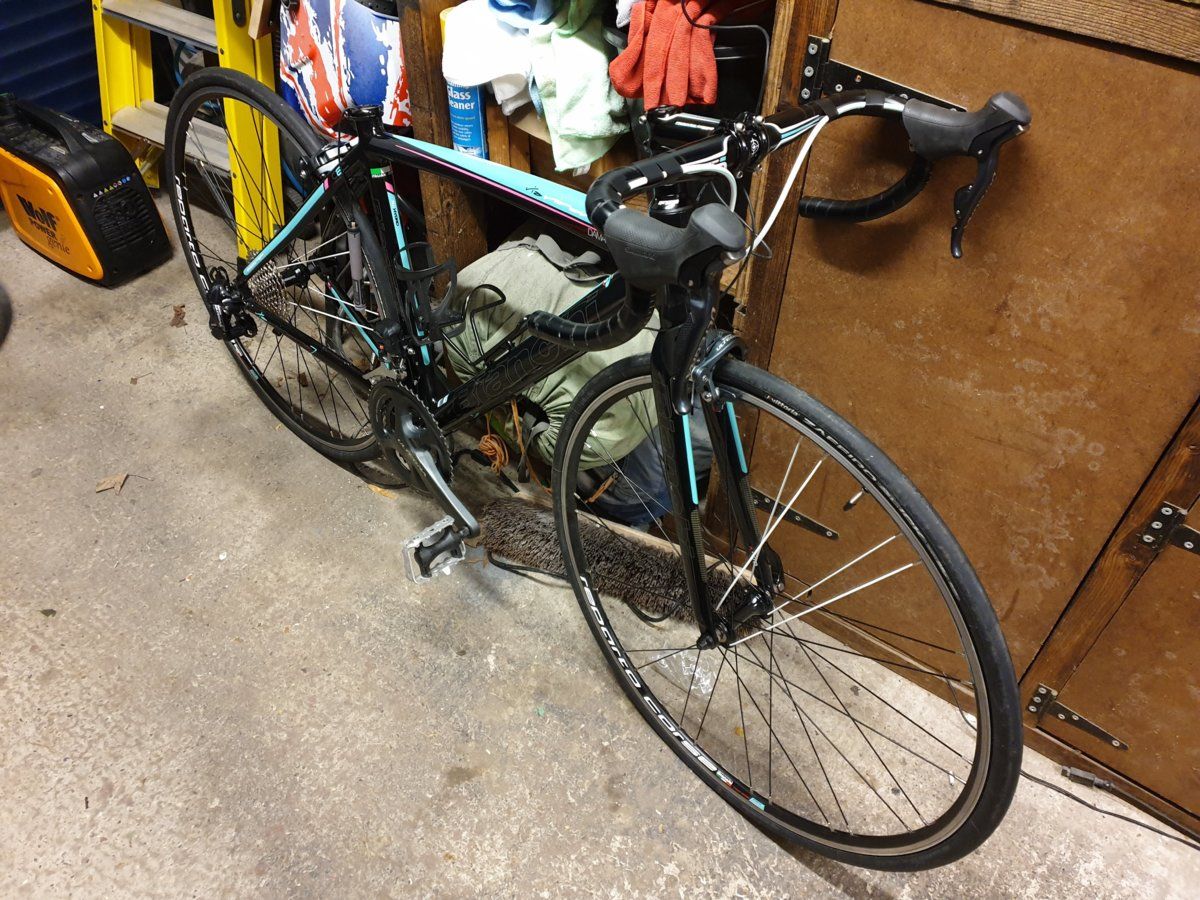 I've wound the shifter reach adjusters all the way in, they're a significant improvement over the bulky Sora levers. The brakes also feel much nicer - smoother and less friction, despite my reuse of the old cables. Overall very pleased with progress, hope to get it finished and set up as soon as the remaining parts arrive