I am doing the Way of the Roses next week and need to get from Pateley Bridge to Harrogate. Is anyone able to confirm whether Route 67 from Clint through Ripley and onto Harrogate is suitable for a road bike. This section highlighted is a bridleway, but it might be metalled. 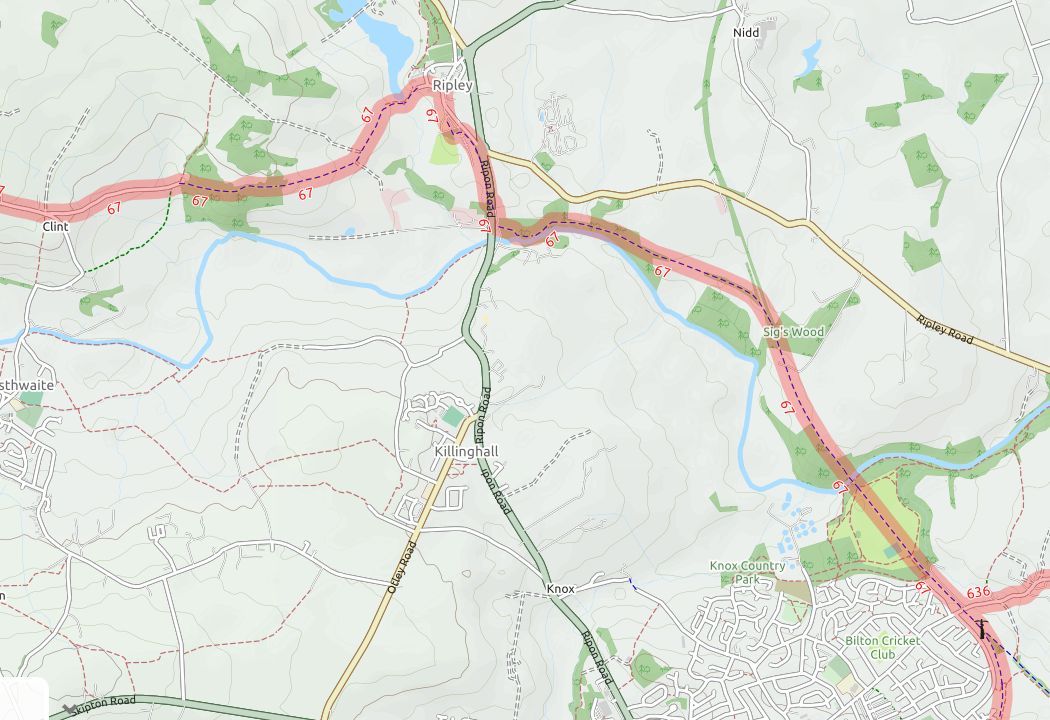 Depends what you mean by "road bike". A tourer with 35mm tyres might be ok in dry conditions. Few Sustrans paths are of any use for a road racing bike, which in my book makes them of little use at all!

Sustrans say the Nidderdale Greenway (a representative section from Ripley to Harrogate) is 41.9% "unsealed firm", which I guess is crushed limestone, and 2.3% "unsealed loose", which probably means mud.

I tested a Spa road bike from Harrogate to Ripley. It had 32cc tyres on but I don't remember anything challenging beyond a surprising number of dog walkers. I didn't go on to Clint so I've no idea about the short section to Ripley.

We did that on THIS forum ride a couple of years ago and it was fine!

After test riding a bike at Spa Cycles three years ago and with a few hours to spare before the train home, I walked that section from Knaresborough to Ripley and back to Starbeck- it's tarmaced, fairly smooth and wide and the view from the Bilton Viaduct is brilliant.

Yes
I cycle that route on my road bike all the time.
OP

Thanks everyone. Looking forward to coming up North.

Part of the route is also called the Beryl Burton Cycleway.

Apparently, her cycling club was in Knaresborough.

I've done the stretch from Ripley to Knaresborough a few times.

As others have said, the path is well surfaced, flat, and scenic, making for very agreeable cycling.

Ripley is a good place for a snack stop, provided it's not too busy with tourists.

The Beryl Burton Cycleway is part of NCN636, the very narrow and steep climb west from Knaresborough which is heavily used by walkers, so that part is best skipped in IMO in the current crisis, due to limited social distancing possible. The alternate is use the A59 - westbound it, after a short distance, has its own cycletrack which initially climbs steeper than the road

and when it rejoins the main carriageway an immediate right turn takes you along a lane that meets NCN636 at the end of the Beryl Burton section. Alternatively the uphill the A59 is two lane so cyclists often stay on the main carriageway.
If heading east from Clint on NCN67 note there is a gate that has to opened to access the bridleway beyond which the bridleway goes up sharply; best to change to an appropriate gear before stopping at the gate.
OP

Call them in advance so they can hopefully have the bike available (don’t know if they’ve been stripped of stock like other LBS). They don’t open Sunday

Spa will let you ride as many bikes as you like for as long as you like.

I get the impression the usual test run is to rattle back along the track to Ripley and return.

It's what was suggested to me and what I did.

Pale Rider said:
I get the impression the usual test run is to rattle back along the track to Ripley and return.

It's what was suggested to me and what I did.
Click to expand...

It was the same for me but with no suggestion to come straight back.

deptfordmarmoset said:
no suggestion to come straight back.
Click to expand...

That was my idea - didn't want to risk getting lost.

Theres a branch off NCN67 to Starbeck, the home of Spa.
You must log in or register to reply here.
Similar threads