I'm 43 and about 6'2,in about March/April last year I took up cycling after selling my car because the car was costing too much and I was barely using it.
I bought a Cube CLS Pro Hybrid on the cycle to work scheme,planning on only using it to commute the 2 miles to work and back.
Anyway,I quickly caught the cycling bug and I was soon doing regular 20-75 mile rides but being a smoker since I was 18 I'd find myself stopping every hour or so for a puff.
At the beginning of June I bought a second bike on the cycle to work scheme,this time going for a Merida Ride Lite 91 Road bike.I've
been out on it a few times for 4-5 hours at a time,not taking any cigarettes with me and I didn't even feel like one.Last Tuesday night I decided to give up smoking for good after nearly 25 years,got rid of anything smoke related in the house.
It's been nearly 5 days now,not even had any patches,gum,etc.I have been to see a Stop Smoking Advisor who has perscribed me an Inhalator and some gum but won't have them till Tuesday.
Don't think I'll even bother with them because I think I'd have got rid of all the nicotine in my system after one week.
I'm pretty confident I'll give up due to the fact I want to carry on cycling as long as I can.I've also noticed MASSIVE difference in my stamina and breathing when I'm out cycling,I can go much further without feeling the need to stop to rest.
Anyway,I've babbled on too long,just wanted to say what a massive difference cycling has made on my life,I NEVER thought I'd give up the fags.I've also gone down from 189 pounds to about 183 pounds.

Good to hear keep it up

Good stuff. Keep at it and don't be tempted back to the dark side.

Your my new hero

Nice one, something I am thinking about.

Well done. Keep it up, it gets easier with time. And benefits are huge!

Location
The People's Republic Of Suffolk.

Brilliant! I think the physical addiction only lasts twelve hours. I still miss smoking, until I have a cigarette and then try and cycle the next day!

It does get easier.

Thanks everyone,all I'm 'using' is a £1.99 fake cigarette which bizarrely works.Psychological I guess,any cravings I have only seem to last seconds.I find if I find something to do I'm fine.If the weather is too bad to go cycling I go swimming. 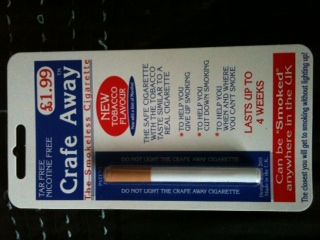 Location
The People's Republic Of Suffolk.

I know that it says that it can be smoked anywhere, please don't smoke on a coach coming down the M6 toll

Andrew_Culture said:
I hope the affect is better than the spelling on the packaging

I noticed this too,thought it was an Americanism

Peteaud said:
It does get easier.

See also this thread where a few of us on here quit the weed at Xmas
Click to expand...

Great thread,going to read all of that after my bath for inspiration