Will this rear wheel fit on my bike?

Will this wheel with a disc brake mounting fit on my bike that has a rim brake. It looks like
the mounting can't be removed so wondering how it will fit as the seller said it will fit with no
modifications as the wheel's meant for either brake system. Looks too wide to me, but what
do I know..
Thanks in advance. 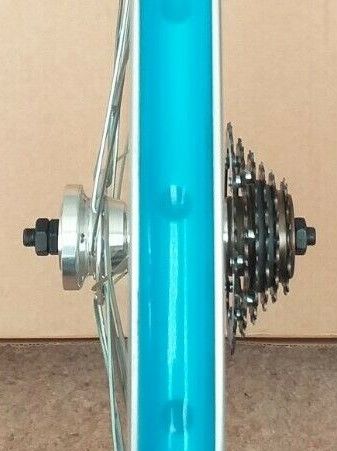 How wide is that wheels hub ??

If it's a 6 speed then it could be 120 mm or 126 mm wide.
But the disc rotor mount may add a few more mm, so maybe 130mm or even 135 mm.
That's the size you need to ask about.
You also need to measure the the inside width of your rear dropouts.
Once you know your width, you can check it against the width of the hub.
If they match then it will easily fit.
If they don't match then I probably wouldn't bother.

The short answer is no, road bikes have 130mm spacing at the rear at most and disc braked wheels are pretty much all 135mm at minimum.

If you are feeling brave, you could 'cold set' the rear triangle - force it open a few mm.

What are the distance between the locknuts of your current wheel and the the new one? I swapped rear wheels in my steel bike just as you propose, and was fine because the size difference was only 5mm, and steel gives to accommodate the size difference. Do not try in an aluminium frame though, and more than 5mm difference might need some thought.

The other question is the rim suitable for your caliper brakes? It may work but does it have the necessary strength to withstand the heat and forces generated ?

Cycleops said:
The other question is the rim suitable for your caliper brakes? It may work but does it have the necessary strength to withstand the heat and forces generated ?
Click to expand...

Good point, the wheel I got has a rim braked rim and the disc mount hub, but in the OPs image I can't tell if there's a braking surface on the rim.

Just buy a rim brake wheel. Plenty still out there.

OP, what is the problem that is nudging you to a new wheel?

A wheel needs to fit (rim and rear dropout diameters both need to match) and the rim needs to be suitable for rim brakes or it won't stop the bike/will wear out too fast.

Have you bought the wheel in the picture yet? If so, could you give us the full spec?

If you haven't bought the new wheel yet, it may be simpler just to head to your local bike shop and ask them what the best course of action is.

Welcome to the forum.

Well I've measured the inside of my bikes dropouts, seems to be roughly 135mm so waiting to hear from
seller what spec his is, but it's looking like it would prob fit. I am having second thoughts today tbh, not sure I want
that rotor mounting on the wheel, was hoping it was removable but it appears not and as Cycleops has raised a good point about whether the wheel is even designed for a rim brake, despite what the seller said.
Wheel just looks in good nick and at a fair price and getting a bit impatient as my wheel's hub bearings are as notchy
as hell and have broken a spoke trying to true the wheel up again!

When I bought my hybrid I was pretty desperate for a new bike there wasn't a lot of choice near me. Being a bit of a
noob I didn't notice the 2 broken spokes on the awkward cassette side, what ball ache fun that was, working out
how to remove that, yes seems pretty straightforward now, now that I have more experience with bikes.

Then there was the matter of the 2 broken spokes, found out how to measure them in situ, ordered 4 off the bay
then when they arrived realised they were slightly thinner, doh! Apparently my bikes spokes are 2.2mm not 2mm,
they would have to do for now! Anyway trued it up the best i could within about 1.5 mm, took my time, lubed the nipples with parrafin and drops of oil, careful not to over tighten and snap them, yay brake no longer binding!

All was good for a while, she went like the wind! then noticed a few weeks later brake rubbing slightly again, that's when I must have overtightened one of the spokes and ping! bit of a dark art this tuning lark is!
So I've come to the conclusion that all is not well with the wheel, bikes obviously had a hard life and been pretty
much abused, maybe time for a new wheel. Was in a right neglected state when I rescued it, still it was only 50 quid
and I love it!

Will try put some more pictures up to see others opinions but probably wasting mine and others time. Thanks guys.

Darius_Jedburgh said:
Master Jedburgh isn't being rude.
You wouldn't ask on here if a pair of shoes fitted, or if a jacket fitted. The only way to find out is to try it.
Now run along little boy, mummy is waiting with your rusk.
Click to expand...

Can you not remember what it was like being unsure about something?
Unless you have a load of experience with these things there are no stupid questions, just stupid answers.
Next time, try considering how your answer could come across to someone who may end up being a promoter of this fine sport
Try thinking beyond what's immediately in front of your face.

Oh yes I can remember what it is like to be unsure.
And I certainly wouldn't put up a picture of half a hub with no proper identification or description and ask if it would fit into a bike frame of which absolutely no details are supplied.
Maybe millennial lockdown cyclist could help us, and himself, by giving us some proper info. But whatever he writes on here he will still need to try the wheel in the frame. And there is nothing anyone on here can do to help him.

Sometimes you just have to try things for yourself. You learn by your mistakes, not by asking half baked questions.

mythste said:
Can you not remember what it was like being unsure about something?
Unless you have a load of experience with these things there are no stupid questions, just stupid answers.
Next time, try considering how your answer could come across to someone who may end up being a promoter of this fine sport
Try thinking beyond what's immediately in front of your face.
Click to expand...

Darius_Jedburgh said:
Sometimes you just have to try things for yourself. You learn by your mistakes, not by asking half baked questions.
Click to expand...


Darius_Jedburgh said:
Now run along little boy, mummy is waiting with your rusk.
Click to expand...