Unkraut said:
Yes but what percentage of that august body need to give their approval?

A sample size of them such that there is an 80% chance that the true value lies with the calculated 95% confidence interval of the sampled value.
M

roubaixtuesday said:
A sample size of them such that there is an 80% chance that the true value lies with the calculated 95% confidence interval of the sampled value.
Click to expand...

That sounds about right.

PK99 said:
f a vaccine were effective for 52% of people, would it be right to say "most" are protected?
Click to expand...

Only if the sample being considered had been vaccinated.

matticus said:
I await the official definition of "most" as approved by the National Society of Statisticians.
Click to expand...

As of the 29th March 2021
The Health Protection Surveillance Centre has today been notified of 1 additional death related to COVID-19.

There has been a total of 4,667 COVID-19 related deaths in Ireland.

As of 8am today, 331 COVID-19 patients are hospitalised, of which 70 are in ICU. 19 additional hospitalisations in the past 24 hours.

For people that don't believe in this Pandemic, I wish I could show them the results it's had on a family friend.

This person is young and healthy no pre-existing health conditions, she wasn't admitted to hospital but the toll this has taken on her is extreme, she has major lung damage and scarring, and damaged heart valves, on her family walk she is now pushed in a wheelchair.

A certain portion of society need to wake up and realize this isn't a joke.

Impending spike among 20 somethings in Nottingham?

people being selfish is a recurring theme during this episode, along with porch pirates,and these people who moan their right to protest is in jeopardy when the event is called kill the bill, it’s right to peaceful protest haha but I suppose these Neanderthal can’t read yet.

Johnno260 said:
people being selfish is a recurring theme during this episode, along with porch pirates,and these people who moan their right to protest is in jeopardy when the event is called kill the bill, it’s right to peaceful protest haha but I suppose these Neanderthal can’t read yet.
Click to expand...

They were sunning themselves in the park, not protesting as far as I know

vickster said:
They were sunning themselves in the park, not protesting as far as I know

I was being a little more general was all, I just throw everyone being daft in the same bucket I suppose haha
R

Johnno260 said:
I was being a little more general was all, I just throw everyone being daft in the same bucket I suppose haha
Click to expand...

I think most transmission has been in the workplace and in households (inter household mixing a particular concern).

Outrage over outdoor risk activities of all sorts is out of all proportion to its impact.

roubaixtuesday said:
I think most transmission has been in the workplace and in households (inter household mixing a particular concern).

Outrage over outdoor risk activities of all sorts is out of all proportion to its impact.
Click to expand...

True, I think my tolerance is just at zero these days.

I fear that 4 weeks will not be a long enough lock down for France. Their rate of increase is as bad as the UK's was in January. As in UK from mid December onwards, the gradient of the wave in France is driven by the 30+% more transmissible B1.1.7 variant (dominant) though in some departments the B1.351 and the P.1 are 'out-of-control' as well (but have no advantage on the B1.1.7 because they are no more infectious (debatable)). The French had made a prolonged effort to avoid a third lockdown - which meant that the case rate 'slowly' doubled over the 13 week period from 4 Dec to 6 Mar. It has doubled again in 25 days (31 Mar) and it seems likely the next double will be (estimate based on locked-down UK) 20 days. To compare cases in UK quadrupled from 4 Dec to 10 Jan (peak): 37 days. And we are just starting to relax the lockdown restrictions, 12 weeks later, with half our adult population, including the 95+% most vulnerable vaccinated (first dose).
Some few percent of its most vulnerable elderly may be safe because they've been vaccinated. Daily deaths in France started to turn up sharply on 25 Mar - which is what might be expected: 19 days since the cases started to rise. (The delay in UK's last deadly wave was 15 days.)
You can see from the graph below why the German Chancellor is desperate to get all the Länder to lockdown without delay. 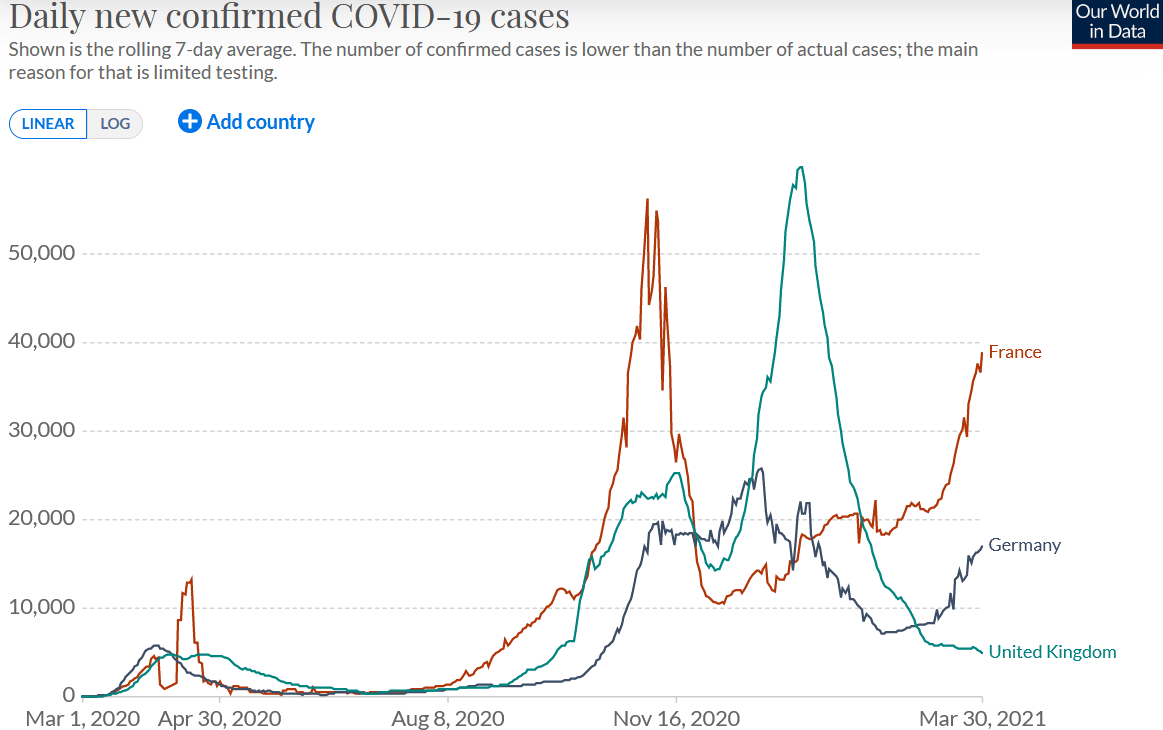 Detail of French lockdown, which includes a ban on public drinking in respose to out of all proportion outrage about people relaxing outdoors. Still no ban on slow-acting presidents. https://www.france24.com/en/france/...c-spaces-under-new-covid-19-lockdown-measures

This annoyed me today front page of the BBC "News" site - "When can we stop wearing facemasks?"
https://www.bbc.co.uk/news/health-51205344
When you get to the actual page the title changes to -

Coronavirus: What are the rules for face masks or face coverings?

US health advisors now say people who have been fully vaccinated against Covid-19 can gather unmasked with others who have been vaccinated.
They can also visit unvaccinated people from one other household indoors without masks or distancing so long as the unvaccinated people are not at high risk for severe Covid-19. But they should still wear masks when out in public.
The UK has yet to make such recommendations, however.
Click to expand...

WTAF has what the Yanks are saying got to do with people in the UK who are looking to the UK state broadcaster for information on Covid rules in the UK? Seriously? Especially damaging as a lot of people have the attention spans of ants and will barely look beyond the first para. It's gross feckin stupidity. 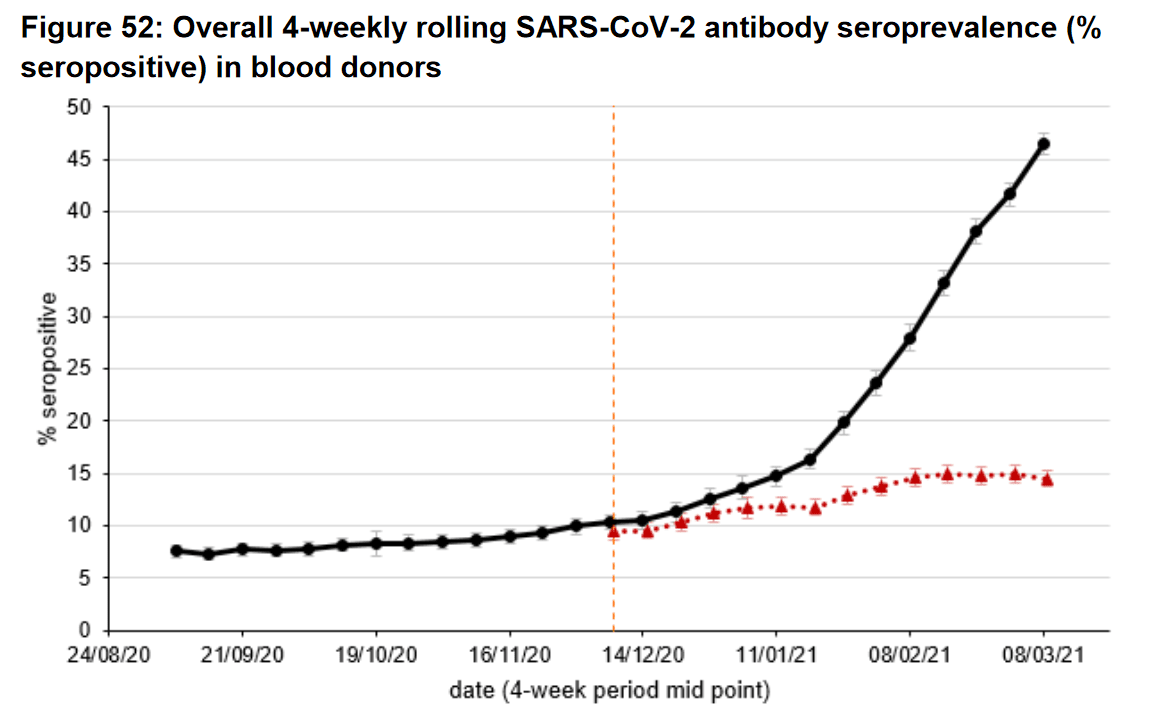 The dataset is up to about 6 days ago and is over 18s in England. The final datapoint on the black line aligns pretty well with the percentage vaccinated by 10 March (14 days before, to allow the vaccine to 'work').
Given:
1) There is a significant seropositive element in the population, without having been vaccinated: 15% (red line above - it averages a little higher in the 18-49s btw); About 22M adults have not been vaccinated: of those 15% who have antibodies is therefore 3+M.
2) 59% of the adult (O/18) population have received their first dose (31M).
3) 75% of the total UK population (ie including the 14M under 18s) is 50M.
Caveats:
# If the vaccination programme proceeds as planned (assumes a resumption of better supply from late April onwards) and
# if herd immunity is achieved at 75% vaccination (see previous posts on discussion of the factors: vaccine % effect on transmission as opposed to 'just' prevention of symptomatic illness, NPI (restriction) measures limiting 'R', dominant variant no more infectious than current)
Then my estimate is that we might reach 'herd immunity' by 14 July. The impact we'd see is that the daily case figure which is likely to rise in the next 6 weeks (NB but not result in severe illness increase - this will decline - cases and hospitalisations have been disconnected by vaccination of the vulnerable half of the population) will tail away in late June onwards and the test and trace mechanism can concentrate on what it can probably manage: whack-a-mole (both outbreaks and VoC discoveries). 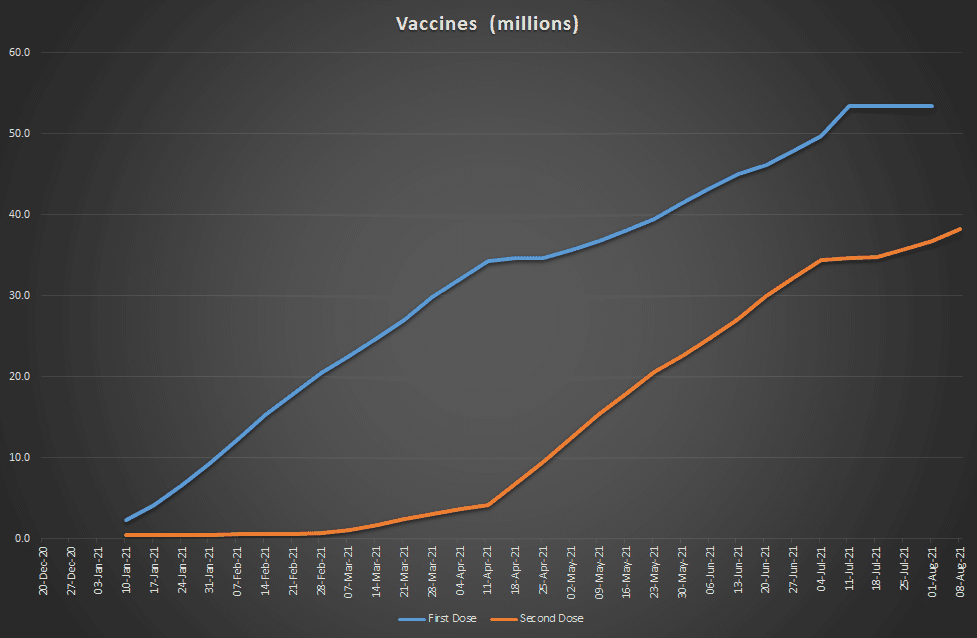 Last edited: 2 Apr 2021
You must log in or register to reply here.
Similar threads